Did the Quattron impress? Fairly so, we must say. Judging by its form factor, the LE820M's svelte and refined figure is capable of giving any of its competitors' premium rivals a good run for their money. The glossy and reflective screen can be a minor quibble, but Sharp has redeemed its cause with an exquisite and seamless aesthetics. It may be a 52-inch monster, but it swivels, so let's not forget that. Features-wise, the AQUOS has a nice string of Eco and advanced configurations to begin with, although it does not boast of too many desserts such as online applications and funky widgets. However, DLNA and networking installations are something consumers shouldn't mind paying a little more for, and that's exactly what the AQUOS Quattron possess. What's more, its USB Media function is a wonderful asset if we may add, albeit a tiny lack of format support such as AVCHD and WMA. 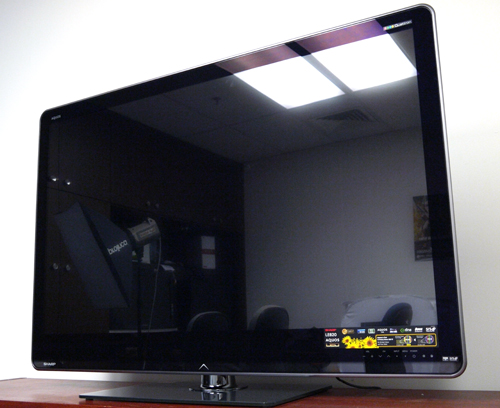 There are a handful of HDTVs which require a little bit of help in producing the right picture, and Sharp's LE820M happens to share the same spotlight as well. We soon realized this TV is quite dependent on its visual features and advanced configurations, and more pertinently so when dealing with fast moving images or panning sequences. The LE820M is lit by edge LEDs without local dimming features, which you already know, although we didn't have a problem with that once we've nailed the appropriate picture settings. Black levels are satisfactory, while Blu-ray visuals are clean and vibrant as a whole. Most of all, this TV's triumphant rendition with DVD sources is a major plus-point we can't ignore. While Sharp's Quattron technology runs the risk of being overrated after experiencing it firsthand, we won't, however, discount this package as a mediocre effort, not by a long shot. In a yellow nutshell, we think this is easily one of Sharp's best work yet, though it might require some work on your part to tweak it to its best performance. Our only gripe is its rather demanding shelf tag which may turn consumers' heads the other way.

For those considering other screen sizes, the Sharp AQUOS Quattron LE820M series comes in 40 and 46-inch panel sizes in addition to the 52-inch model reviewed here. On a side note, the smaller brothers are more competitively priced than the 52-inch model if you know where to hunt for a good bargain.