Dressed in silver and black, Sharp's AN-3DG10-S eyewear is noticeably heavier than most of its competitors due to the built-in circuitry found in both legs. Even so, it is still relatively comfortable on the nose and ears when we tried it on. The infrared receiver is situated right between the lenses, so be sure not to obstruct that spot. Although the active-shutter glasses is equipped with a mini-USB slot, the terminal is used mainly for servicing and not for other purposes. Speaking of which, the AN-3DG10-S isn't rechargeable like LG does. It's powered by a CR2032 lithium button cell if you're curious. Given the TV's versatile 3D finesse, you can also toggle between 3D and 2D modes by pressing the power button twice. The LED blinks twice when in 2D mode, and thrice in 3D. However, you'll need to remove the glasses to read the LED status since it resides at the top of the glasses' leg. The 3D eyewear also also comes with a cleaning cloth, glasses band, travel pouch, two nose pads and two mini screwdrivers. 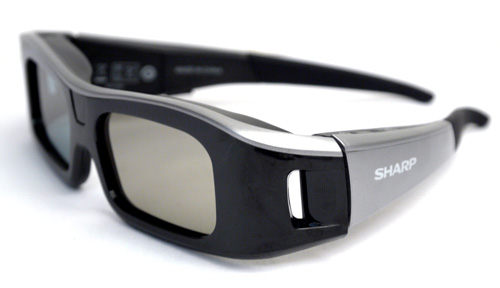 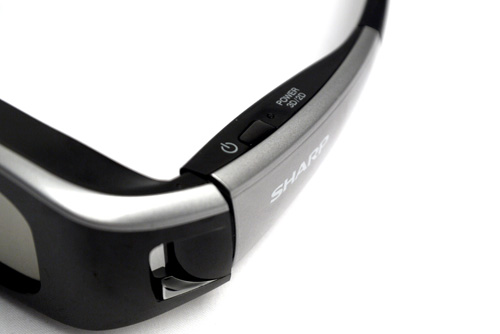 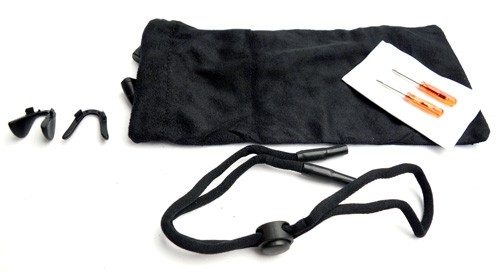 Sharp is late to the 3D revolution compared to rivals such as Sony, Samsung, LG and Panasonic. On the flip-side, they have packed enough 3D firepower into the flagship LE925M to rattle the competition's cage. For starters, the AQUOS Quattron is not only capable of displaying 3D sources, it can also convert that signal to 2D in real time. Just hit the "3D" button on the remote to kickstart the 3D-to-2D process. The opposite is also possible if you prefer to eyeball 2D pictures in stereoscopic form. Simply hit the same 3D button when running a 2D reel, like a standard Blu-ray movie for example, to convert the output to 3D form. Additionally, Sharp's active-shutter glasses also has a similar 3D to 2D feature to scream about. For all its fancy moves, how did the 60-inch Quattron really fare in the real world? Here's our assessment based on the "Monsters vs Aliens" 3D BD title. 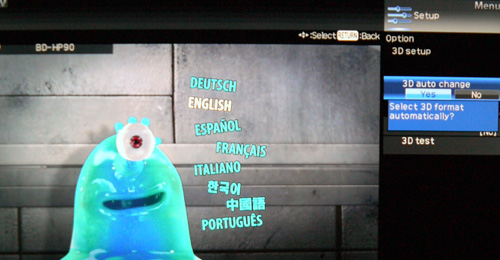 AQUOS Quattron LE925M - 3D performance: From start to finish, the LE925M exhibited impressive 3D depth, contrast and detail. The X-Gen's panel high luminance also makes it ideal for 3D excursions with its punchy clarity. The HDTV comes with three levels of brightness, which you can engage via the R button on the remote after hitting the 3D button. Although intermittent crosstalk was still evident from scene to scene, it appeared more of a shimmer rather than a shadow image in most cases. Motion resolution was equally delectable. For the LCD genre, we'd rate it above the Samsung C8000 and LG LX9500, and a notch more impressive than the Sony BRAVIA NX810.

Active-shutter glasses - 3D to 2D performance: At this point in time, Sharp is the only player in the industry with 3D to 2D conversion by means of its active shutter glasses. The conversion process is relatively easy to understand, since all the lenses do is to shutter in sync instead of alternating between the sequential frames. Simple as it is, occasional crosstalk remained visible during the "converted" 2D experience, and we also had trouble focusing on certain subjects from time to time. Truth be told, Sharp's feature is more gimmicky than convincing in this case. On the bright side, there were also instances where timing between transmitter and receiver rolled in perfect harmony, which led to a formidable 3D display to behold.

AQUOS Quattron LE925M - 3D to 2D performance: While the TV may have faltered in its 2D processing with the glasses on, the Quattron's internal 3D to 2D conversion promised better results on the whole. Needless to say, ghosting or crosstalk was not an issue here, and the animated characters were sharply rendered with satisfying clarity. To engage this function, press the remote's 3D button, and select "Yes" when prompted for the 2D transformation.

AQUOS Quattron LE925M - 2D to 3D performance: We popped Vantage Point back into the Blu-ray player for this test. Now, 2D to 3D translation involves complex algorithms and processing on the part of the TV's engine. Unfortunately, 3D displays from Sony and Samsung with similar features have yet to convince us of a truly effective 3D conversion from a 2D source. The same can be said about Sharp's LE925M, where 3D depth is slight and hardly noticeable on the Blu-ray title. And your eyes, if not your brain, might be annoyed by the occasional flickering on the screen's moving subjects. It might bring you pleasure to know that you can transform 2D content to 3D with the Quattron, but we'd rather use a dedicated 3D Blu-ray source if we desire a stereoscopic experience. The AQUOS Quattron offers three conversion modes: 2D to 3D (frame sequential), Side by Side, and finally, Top and Bottom.