Note: This review was first published on 16th November 2015 and re-published again as it's a popular read.

Not all chairs are created equal 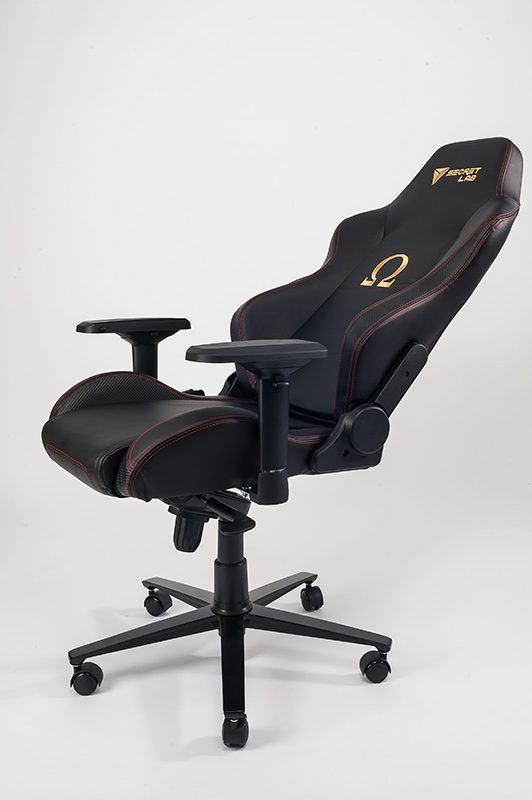 What can one do to improve a chair? As it turns out, a huge lot. When we first reviewed the Secretlab Throne V1 earlier this year, we thought that it was a decent and affordable chair, albeit with a few flaws. But for its S$349 price, we couldn’t really complain.

Secretlab is now back with two new chairs, the S$429 Throne V2 and the S$499 Omega. The latter is our object of interest here, and boy does it have us intrigued. The Omega is unabashedly going after the more premium segment of the market, all while doing its best to stick to Secretlab’s ethos of offering quality products at a reasonable price.

The result is a radically overhauled chair that surpasses all our expectations. This is literally the most comfortable chair we’ve ever used (OSIM massage chairs don't count). Granted, most of them were crappy, rickety four-legged excuses for chairs, but we think we know a good chair when we see one.

But before you get all excited, do note that the Stealth version of the Omega is totally sold out for now, with stocks expected to arrive at the end of November.

For starters, the Omega sports quite a different design from most racing-seat inspired chairs. While most gaming chairs look lean and mean with their racing stripes and headrest cutouts, the Omega has a more staid, business-oriented design that will likely appeal to a broader audience.

It is available in two colors, an all-black Stealth version with carbon fiber detailing, and a Classic version with white panels in place of the carbon fiber. Gone are the bright, fun colors of the Throne. In its place, we have a gaming chair that would not look out of place in an office. 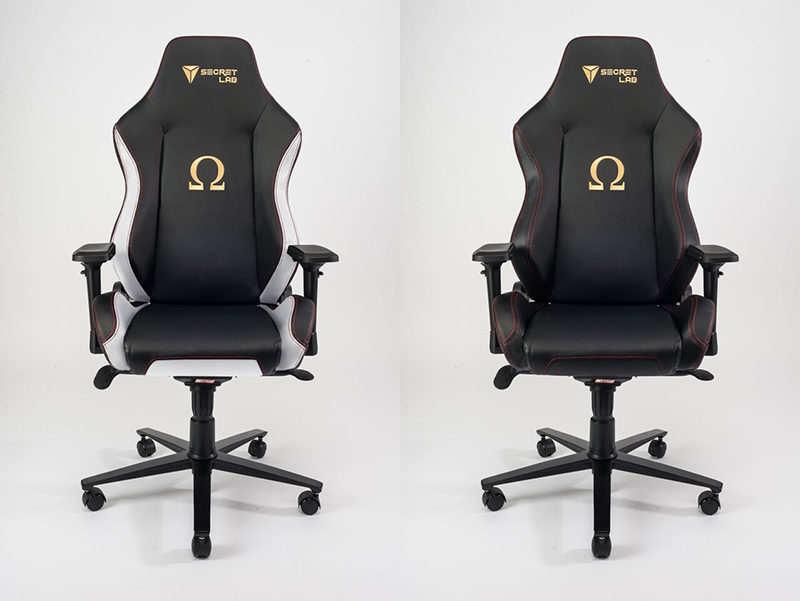 If you like the reds, blues, and greens on the Throne V2, you may be slightly disappointed that these options aren’t available on the Omega. But for what it’s worth, bright colors don’t feel quite so premium, and we think Secretlab made the right choice by going for a more modest color palette.

It has also paired the more professional color scheme with red-stitching. This actually looks really good in person and is found in both the Stealth and Classic versions. 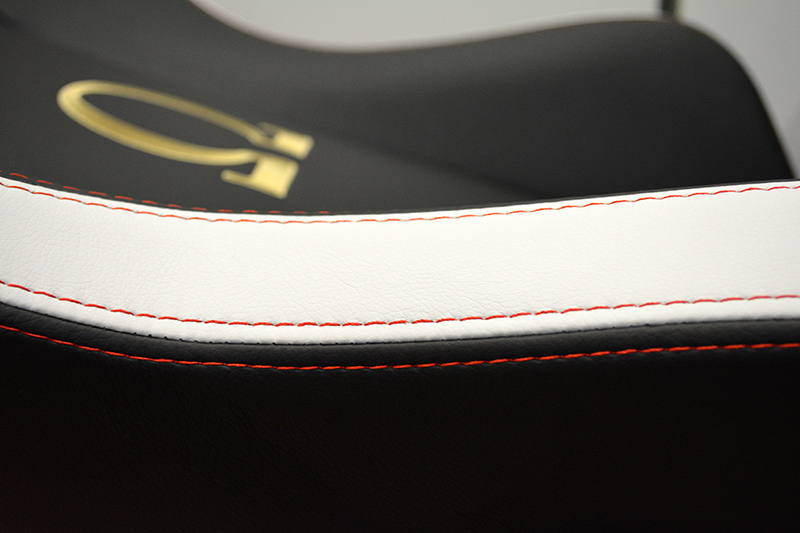 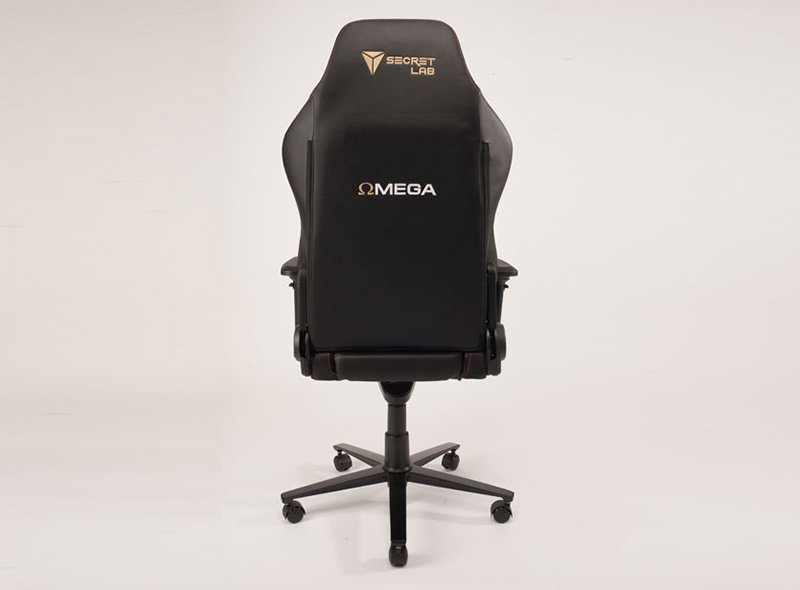 In addition, Secretlab has used a higher quality variant of PU leather on the Omega. It is noticeably softer and feels far more supple than what we’ve come to expect from PU leather. But with PU leather, there’s always the issue of breathability, where long hours of skin contact can feel a tad bit hot. When it came to the Omega, we thought that this issue was slightly better compared to other PU leather chairs (although we could just be imagining things). 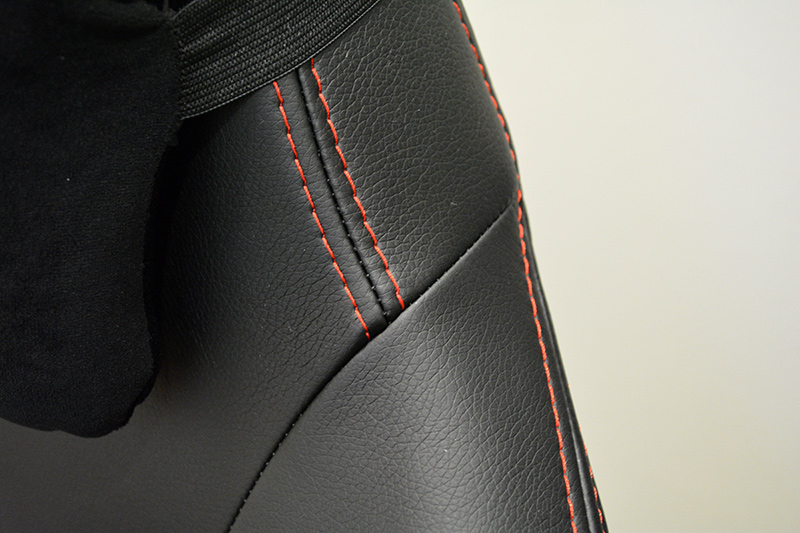 But now for something more concrete. When viewed from the side, you can clearly see the amount of padding that has been added to the chair – that is to say, a lot. Compared to both versions of the Throne, Secretlab has layered on an extra-thick layer of cold-cure foam. And having used both the Throne V1 and the DXRacer Formula series chair for extended periods previously, it’s safe to say that the additional padding on the Omega does make a palpable difference. 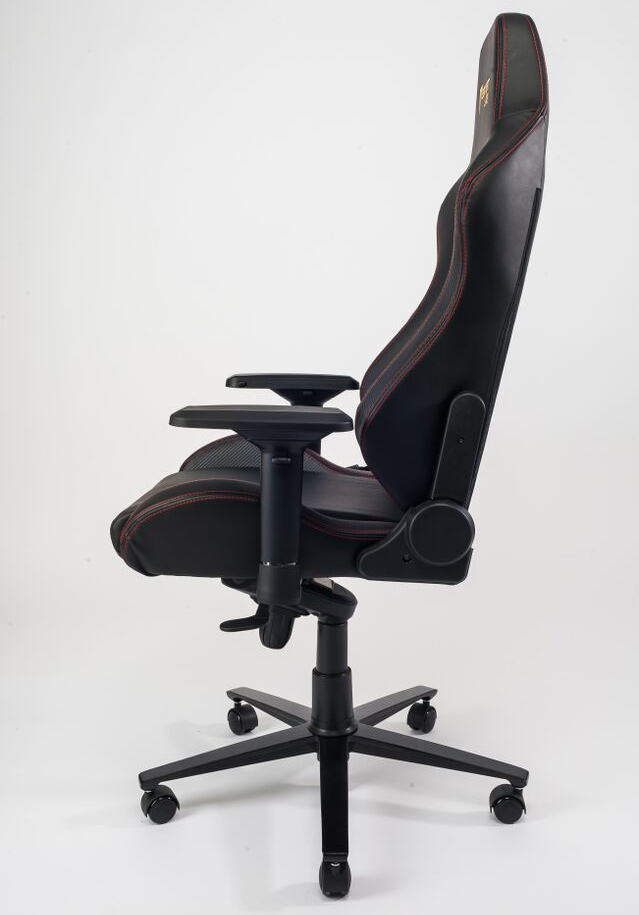 The cushioning is much softer and generally feels more luxurious. There is more give on both the seat and backrest, which is probably what contributes to the overall more comfortable experience. However, if you’re concerned that the softer padding means that there is a lack of support for your back, there really isn’t much cause for worry as the Omega manages to strike a good balance between comfort and support.

On the topic of support, the Omega comes with the standard head and lumbar cushion that are pretty much the norm on most gaming chairs. These are also much improved compared to the first Throne. The cushions on that chair were noticeably less dense, and hence offered less support, than those on the DXRacer Formula series chair. Furthermore, we actually preferred to use the Throne V1 without the head cushion.

That’s changed with the Omega as the head cushion is markedly more firm and does its job much better. The stuffing has clearly been made more dense, and the same goes for the lumbar cushion. It’s also a good-sized pillow, which means that it’ll work for you even if you have a slightly larger frame. In addition, the back of the pillow and its strap now comes with a non-slip rubber band for a better grip. We didn’t notice any slippage with the previous version, but this is still a nice feature to have.

In fact, the now-solid headrest means that the chair is more comfortable to use without the head pillow. This is because there’s no longer any hard plastic cutouts that might be uncomfortable to lean against.

Finally, the base has been upgraded to an aluminium one. Gone is the cost-saving nylon base. Secretlab told us that they’ve not scrimped on any aspect of this chair, and that claim certainly looks to be holding up here. We also like that the individual spokes of the base are now straight instead of curved as on the first Throne. It’s now much more comfortable to rest your feet on the base.

In addition, the casters have been beefed-up to larger 6cm casters for a smoother glide. In case you’re wondering, the Omega is rated to support weights of up to 110kg.

A wider range of adjustments

But other than the beefed-up build quality, the other significant upgrade on the Omega is the four-directional, or 4D, armrests on the chair. As its name suggests, these can be adjusted in virtually any direction with options for front and back, side to side, and height adjustments. We cannot stress enough how much of an improvement this is over the wobbly armrests on the Throne V1. 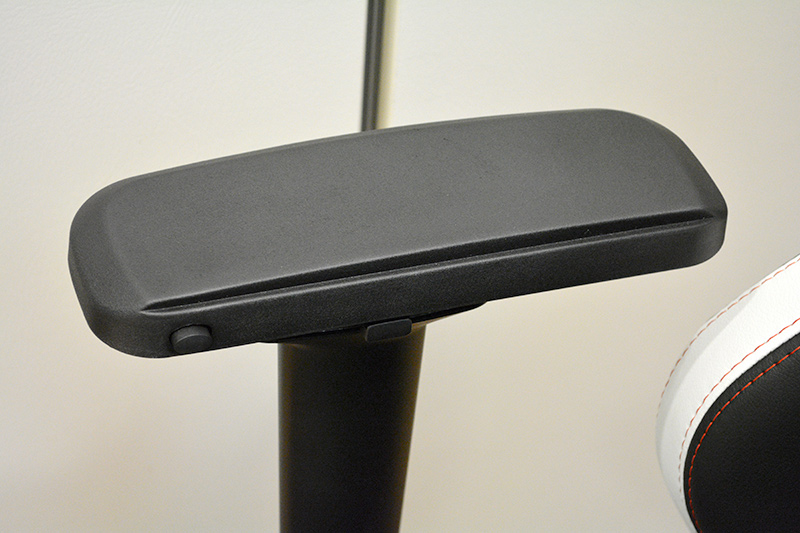 The armrests now feel wonderfully solid. We particularly like the ability for front and back adjustments – by our count there are five possible positions – because this now allows us to sit closer to our desks. That was an issue with the previous Throne and DXRacer, and we’re glad that the Omega manages to address this. A push of the button on the inside of the armrest allows it to slide along rails etched in the bottom.

The armrests are also much broader this time. Even if you have forearms as thick as tree trunks – do you even lift? – these should turn out to be comfortable enough. And if we may just point out one minor detail: The armrests have chamfered edges, which means no sharp corners digging into your skin even after long hours.

But if we were to nitpick, we’d argue that there isn’t much point in the side-to-side adjustments. The mechanism is activated by pushing another button located in the middle of the armrest, but the adjustments are too slight to make any significant difference. Other than the default position, you can only slide the armrests by around a centimeter or so to the left or right. Maybe it’ll come in handy if you just feel that there’s something off about the default positions, but we ended up making little use of the feature. Furthermore, the mechanism appears to be a little too tight as we had to use quite a lot of force to slide the armrests to the side (or maybe we’re just not using the right technique).

On top of that, the tilt mechanism has been overhauled entirely. The Omega’s tilt mechanism is something quite special because not only can you rock back and tilt the chair, you can also lock it at your desired tilt angle by turning the left adjustment lever down. There are no markings to indicate which direction to lock, so you’ll have to remember the correct lever position or simply try and see if you can rock back in the seat. The new mechanism also makes it much easier to tilt the chair while the backrest is in an upright position. Previously, the tilt mechanism was best employed while the backrest was reclined considerably. 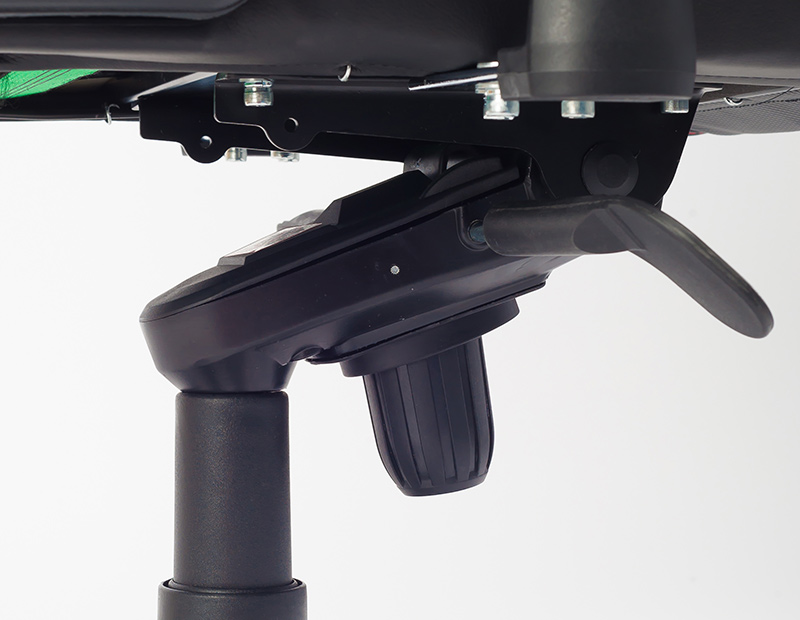 Speaking of the chair’s recline, a familiar pull-up lever on the right side of the chair allows you to push back the backrest (which combined with the thick cushioning, makes it a good candidate for naps). When the tilt mechanism is locked, the chair can recline up to 155°. This may not seem as impressive as the 180° on competing models from rival brands, but trust us when we say that it's more than you need. Of course, we're assuming that you aren't intending to make this chair your bed. In our daily use, the mechanism felt pleasantly smooth, with just the right amount of resistance. 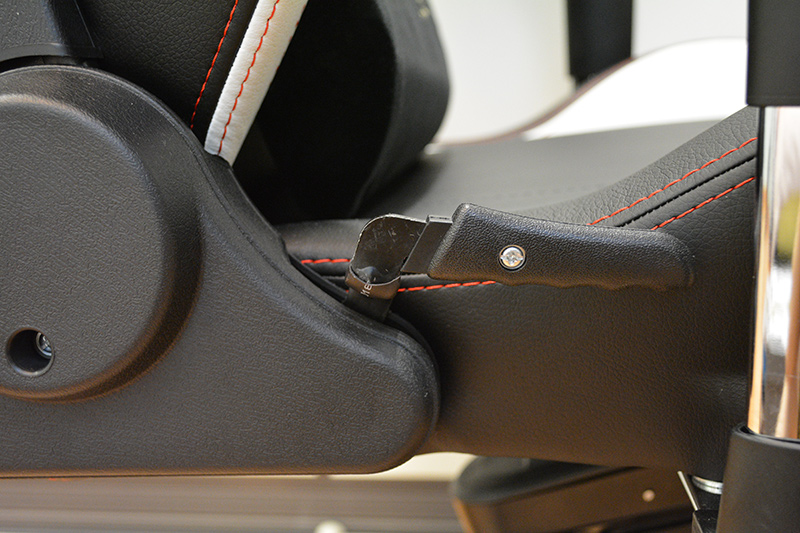 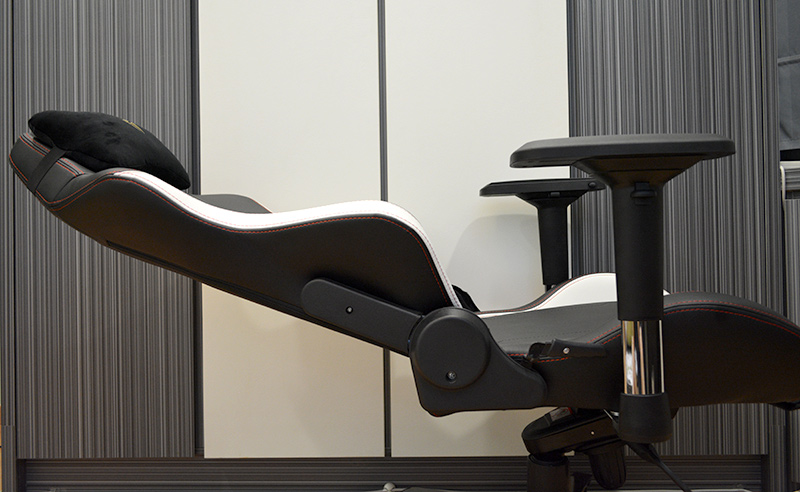 To cap it all off, height adjustment is made possible by another lever on the right side of the chair. 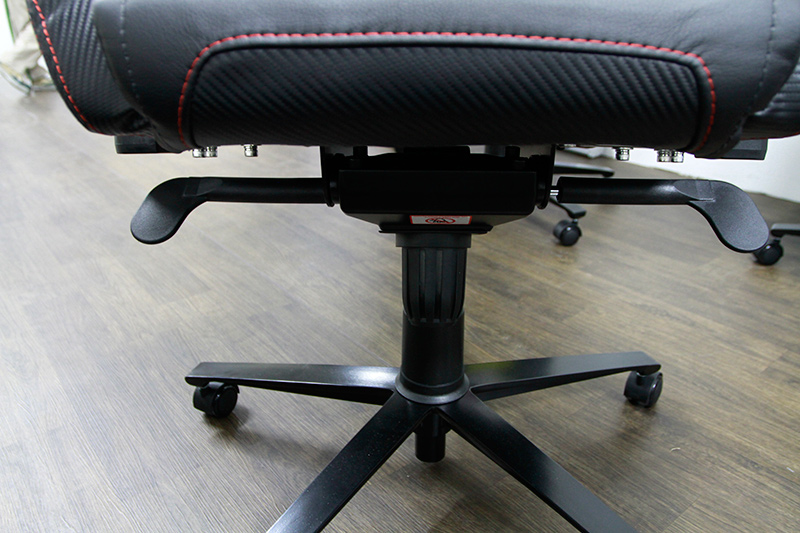 Overall, the entire seating experience of the Omega felt top-notch. With its deeper bucket seat and more form hugging shape, we felt like we were luxuriating in a truly premium chair. 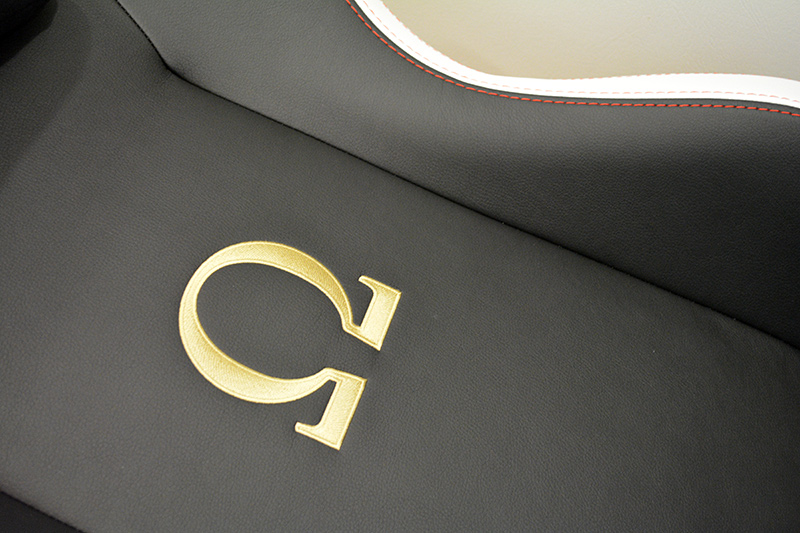 We’d like to unpack the whole concept of gaming chairs a little. The idea itself may seem a tad bit frivolous to some. After all, what does the term actually mean? Is it a chair that helps you game? Does this chair actually help you play better? No, no, and no.

In fact, we’d argue that gaming chairs are only called such because of their traditionally aggressive, racing seat-inspired designs. These bold designs are then marketed to gaming enthusiasts as a great way to complement their tricked-out rig and derrière, complete with additional cushioning for the long hours that they are going to spend glued to their screens.

So if you’ve written off the Secretlab Omega because you’ve seen it referred to as a gaming chair – and hence a potential waste of money – think again. The gaming chair moniker is an inaccurate and narrow one.

The Secretlab Omega is very simply a great computer chair, regardless of whether you want to use it in the office or at home. Its modest and elegant design helps it appeal to a wider crowd, and its excellent build quality and features help it stand a head above its competitors. At S$499, the Omega also costs less than the cheapest locally available alternative, the S$550 DXRacer Formula series chair. Of course, don't forget that the Formula series is actually DXRacer's entry-level model and the brand also has pricier alternatives like the King series that would perhaps measure better up to the Omega.

As far as direct match-ups go, the King series chairs are also available locally at a hefty S$779, quite a bit more than the Omega. They come with similar features like 4D armrests, a similar multi-function tilt mechanism, and generous padding, so these are the chairs to look at if you're scoping out the Omega's competition.

Nevertheless, as far as local pricing goes, Secretlab has always successfully undercut its rivals. But what’s changed this time around is that the Omega is both cheaper and better.

Yes, you heard that right. There are free lunches in this world after all. But in all seriousness, Secretlab really checked all the right boxes with this one. This is a chair that will keep you happy for a long time.

Write a Review
Compare This | Specifications
Thick layer of foam
Outstanding build quality
Wide range of possible adjustments with 4D armrests and upgraded tilt mechanism
Side-to-side armrest adjustments a bit stiff
Lumbar cushion not adjustable
Our articles may contain affiliate links. If you buy through these links, we may earn a small commission.
Sponsored Links