Samsung is a company which has its fingers in just about every pie imaginable. The Korean chaebol makes notebooks, monitors, smartphones, tablets televisions and also home theater audio products. The HT-E8200 is an entry to mid-level sound bar which is intended to help you easily replicate cinema style sound in the comfort of your own living room. So following our recent review of the Pioneer HTZ-HW929BD sound bar system, we'll be evaluating the Samsung HT-E8200 sound bar in this review.

In terms of aesthetics and design, the Samsung HT-E8200 follows the tried and tested formula for sound bars. The product is a two piece system with a horizontal speaker that features a built in Blu-ray player and a subwoofer.

With just about every other sound bar system offering the same configuration, Samsung has tried to differentiate the HT-E8200 from the rest by cutting the cord between the subwoofer and the horizontal speaker. On the whole, the sound bar is dressed in black but is somewhat marred by the greenish-blue tinge where there Samsung branding is positioned on the front face. The subwoofer is finished in mirror black.

The horizontal sound bar speaker measures in at 1041mm x 133mm x 96mm and weighs a little over 4kg. While the bar speaker is quite wide, fortunately its height isn't tall enough to impede the infrared port on most televisions. Unlike other modern wireless connectivity options, most remotes still use infrared light as their means of communication and this requires a clear line of sight between the remote and the receiving product. As mentioned earlier, the Blu-ray player is built in to this speaker's design and features a top down disc feeding system. Unlike the Pioneer HTZ-HW929BD’s Sound Wing upward facing design, the Samsung HT-E8200's speakers are orientated in the standard forward facing style, albeit slightly tilted.

Flip to the back panel of the horizontal speaker bar and you'll find the necessary connectivity options. As can be expected, the HT-E8200 has one HDMI output and two HDMI input ports. Further connections are also possible via component video output and an optical input port. A LAN port for connecting to the internet is provided as well. Last but not least, you'll also find a single USB connector and an Aux-In (3.5mm) audio port. Frankly, we expected slightly better accessibility of the last two options than fiddling at the rear of the speaker with all the connections clustered in the below layout:-

The dual HDMI input ports are handy because they expand the range of peripherals which can be hooked up to the sound bar. Since the Blu-ray player is already integrated within the device, you don't really have a need to hook many other devices other than your game console or perhaps a dedicated media streamer/player box. Despite that, the provision of HDMI ports still does not match the excellent Yamaha YHT-S401 which featured three HDMI input ports; but in our opinion, dual HDMI inputs for Samsung's design is adequate. Similarly, while the single USB port provided is sufficient, competitors such as the Pioneer HTZ-HW929BD provide two for added convenience. In today’s world where everyone has a smart device, you can never have too many USB ports and a few more on the Samsung sound bar would not have gone amiss. 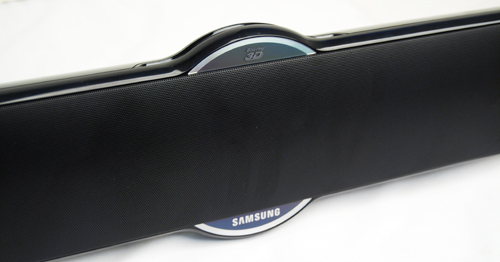 The subwoofer for the Samsung HT-E8200 is quite large, measuring 290mm x 370mm x 290mm and weighing 7.25kg. This makes it a large unit and almost twice the size of the Pioneer HTZ-HW929BD’s subwoofer. With such a large cabinet, you would naturally expect good low frequency performance, but more on its actual capabilities in the following pages to see if it can deliver on the promise displayed by its design. 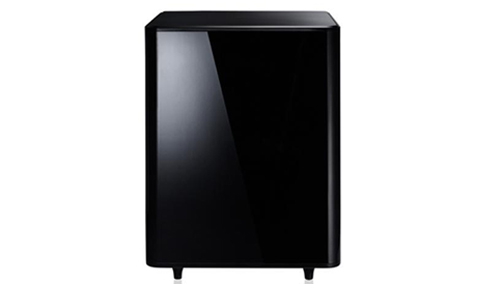 A previously stated, the subwoofer for the HT-E8200 connects to the main sound bar wirelessly. This does involve setting the subwoofer up before it can be operational. Be sure to have a pin handy (you can also improvise with a paper clip or safety pin) as it is necessary to activate the connection procedure. The wireless nature of the subwoofer is quite convenient since you can safely place the subwoofer anywhere in the same room as the sound bar. You're only limitation would be a power outlet to power the active subwoofer, but at least it's less hassle than if you needed to connect it to the main sound bar (such as the Pioneer sound bar system). 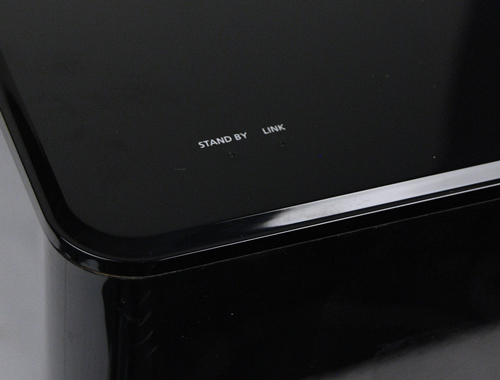 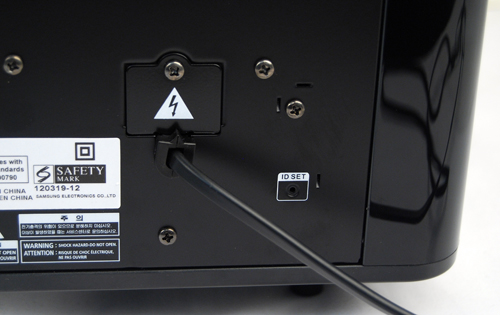 Write a Review
Compare This | Specifications
Wireless Subwoofer
Excellent suite of smart features
Wide soundstage
Weak and anemic low reigsters
Muted highs and trebles
Bulky and heavy construction
Our articles may contain affiliate links. If you buy through these links, we may earn a small commission.
Sponsored Links