Is the Z Flip3 5G even practical? 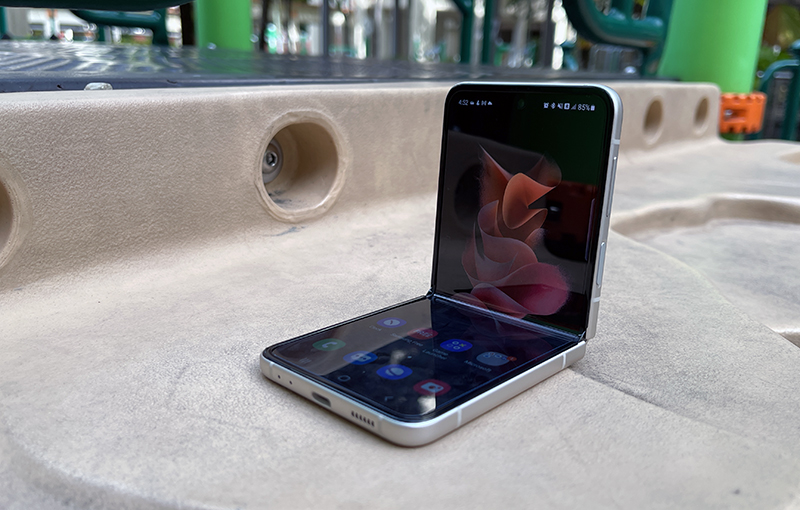 How practical is the new Flip3 5G?

With the changes largely focused on improving what works, lets take a closer look to assess these updates over its predecessors. At the core, the Z Flip3 5G is positioned as a fashionable, yet flagship-grade handset that’s meant to be cutting-edge in looks and daily practical use. 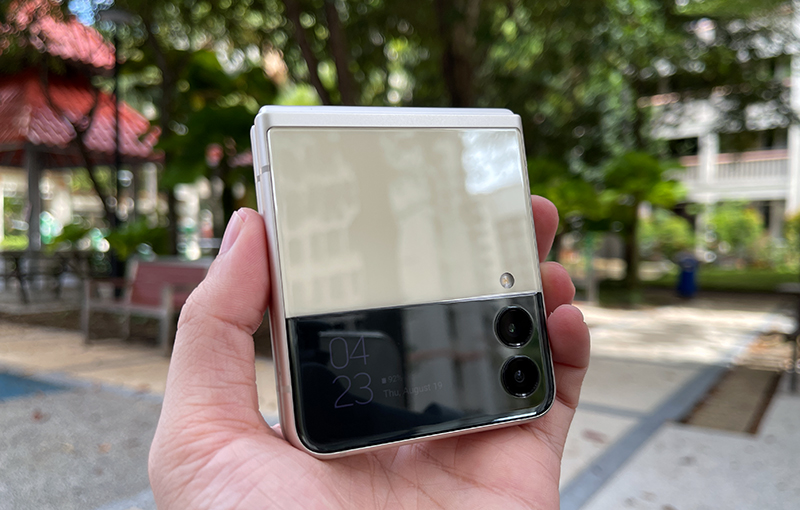 Z Flip3’s Cover Screen has massive upgrades. What used to be a thin bar next to the camera is now four times bigger: a 1.9-inch, 512 x 260 pixels resolution Super AMOLED display.

The Cover Screen shows an AOD (always-on display) with no embellishments beyond current time, date, and battery levels when idling. Double-tapping the display wakes the Cover Screen, presenting you with your wallpaper of choice while granting you access to more features: additional widgets, Samsung Pay, notification previews, and toggles for audio mute and screen brightness. 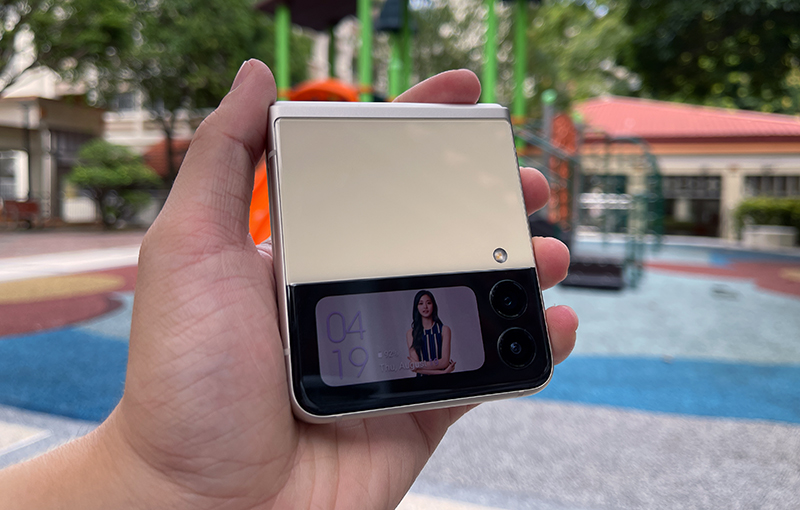 Protip: want a fuss-free way to get animated wallpapers for the Cover Screen? Use a GIF file. 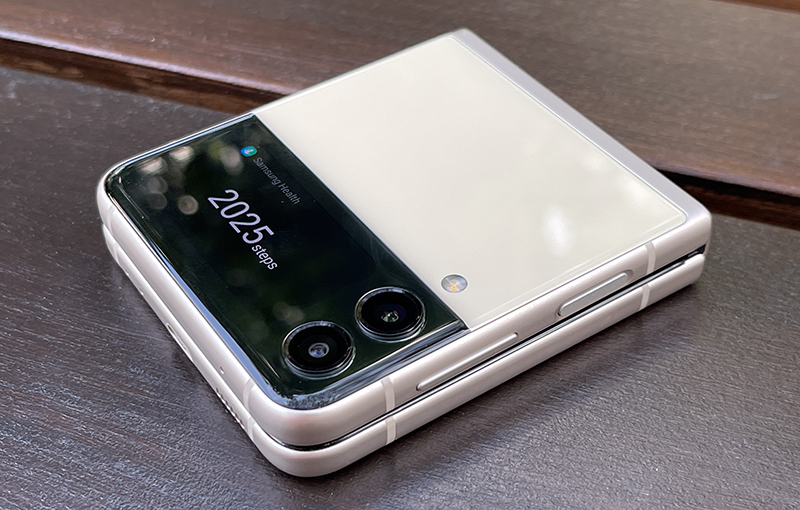 To use the additional widgets, double-tap to wake the Cover Screen, and swipe to the right for the six options - weather, schedule, music, Samsung Health, alarm clock, and timer. Samsung lets you re-arrange the order of the widgets, but they cannot be removed nor swapped out for other features. So we recommend arranging it based on your priorities.

Of the six widgets, Samsung Health seemed to be the least practical. It shows the number of steps taken for the day, and there’s no option to check other health metrics until you unfold the device to access the full app. If we assume that Cover Screen’s limitations are non-negotiable, a great way Samsung can improve the Health widget is to allow users to pin the health metric they’re most concerned. 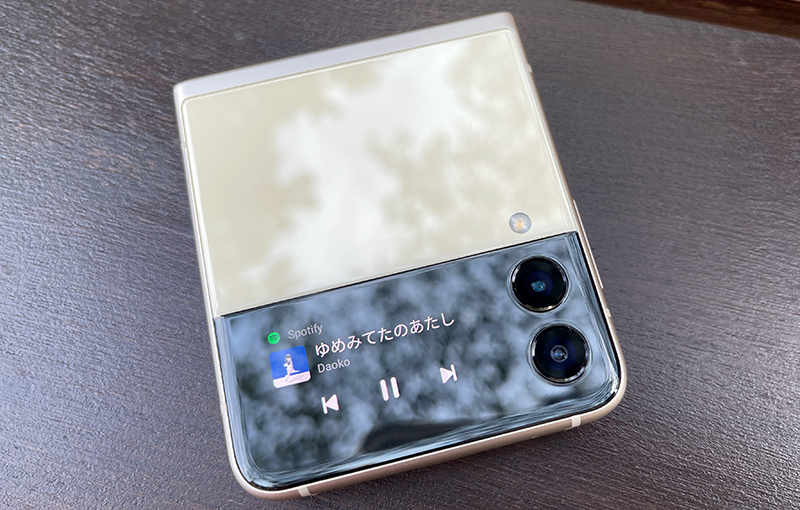 The other widgets are great. The music widget works with Spotify and even confers basic controls to pause and skip tracks (we wish it could let us scroll through the playlist too). The alarm was surprisingly smart, showing the countdown to the next alarm, on top of the exact date and time. Timer follows the default duration you’ve set in the main app, offering only a button to stop and start it. So, optimal usage would require you to set your preferred default countdown in the main app first - perhaps a HIIT interval for your daily workout or keeping your breaks on schedule. 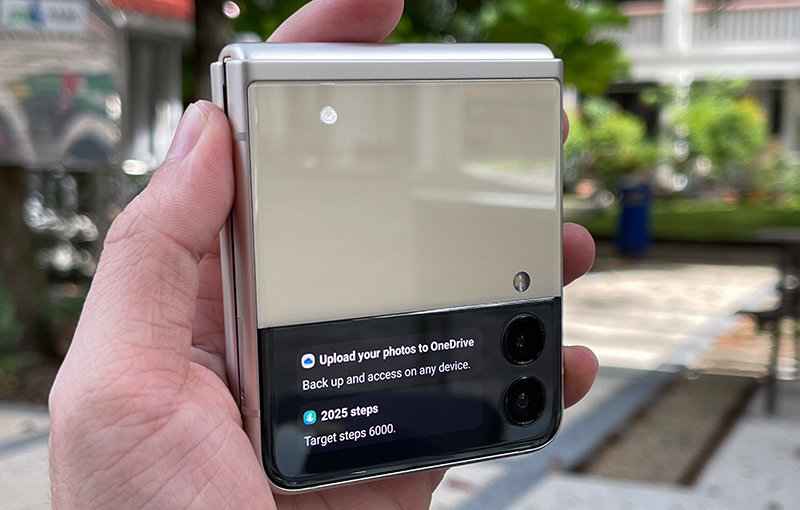 Unlike the old models where the one-line notifications scrolled by, Galaxy Z Flip3’s new notifications panel shows you a static preview of two notifications, truncated to fit the display, while others are just a swipe away. To maximise your time and to further interact with it, you can tap on the notifications in Cover Screen to launch the full app for use over on the Main Screen while you unfold your phone.

Is the Cover Screen itself more practical than before? Definitely, but there is still room for improvement. For example, Samsung could’ve made that front half of the phone into a display, and the Korean firm need not go overboard in creating highly-specialised widgets. Notifications won’t be as truncated, and the selfie preview would be bigger. Who knows? Perhaps we could see this update in the next Z Flip phone. Nonetheless, the current Cover Screen and its additional features are a welcomed improvement, seeing how it eclipses its predecessors in practical ways.

Paying your way on the Cover Screen 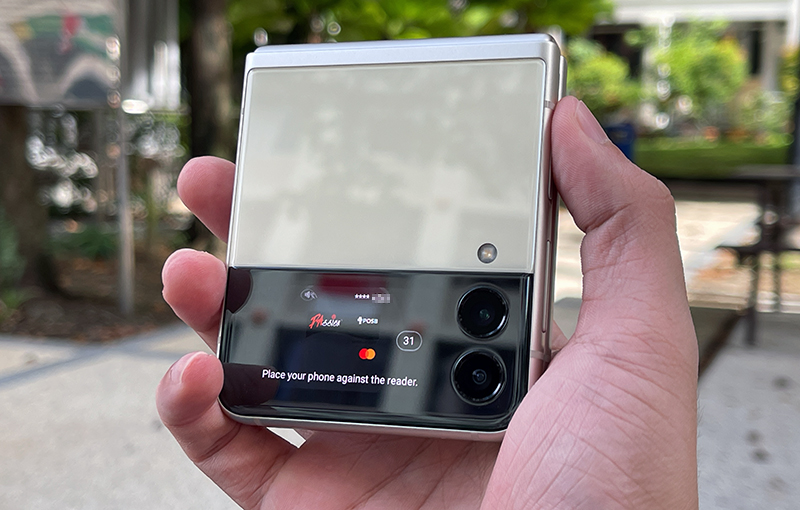 The only step that felt clunky was fingerprint verification - you need to feel around for the side-mounted power button to verify your prints accurately. Also, only the default card shows up in Cover Screen, so if you want to pay through a different card, you’ll still need to unfold your Z Flip3.

Would we incorporate it into daily use? Absolutely. Contactless payments in conventional phones feel a little unwieldy via a standard 6-inch handset as you'll have to feel you way to activate the sweet spot for the payment to go through. Samsung Pay on the Flip3 5G offers the better form factor, with the default card you’ve specified and added fingerprint verification. It’s an excellent use of the Z Flip3 5G’s unique build. 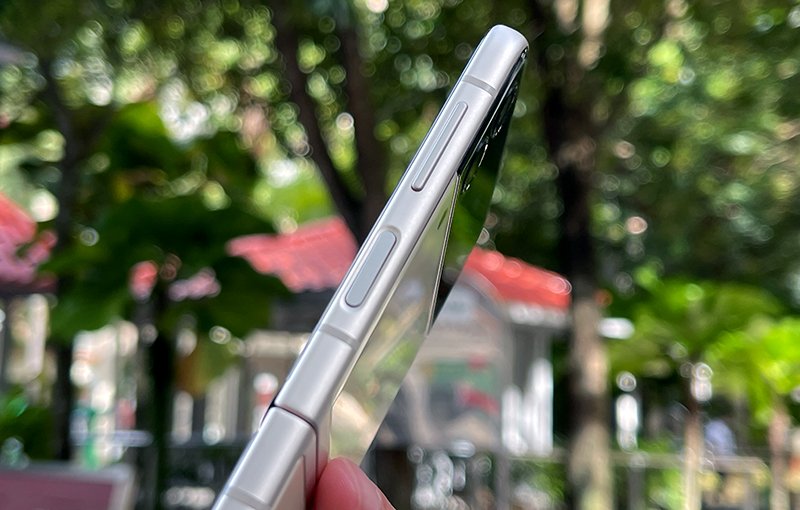 Samsung’s other enhancements for the Z Flip3 5G mainly addresses the physical longevity of the foldable form factor. But, these benefits wouldn’t be apparent until you’ve put the phone through an extensive daily grind. 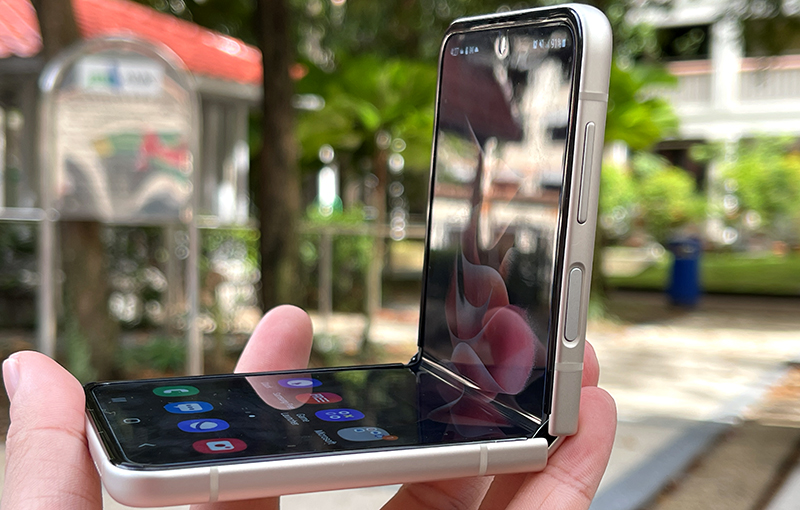 If you’re using an older Flip or Fold, you’ll notice that the film layer on the primary screen leaves tiny scuffs when you’re too rough with it. The Flip3 5G’s new protection film layer, with its purportedly 80% increased durability against scratches, is evidently more helpful in ensuring that your constant swipings and tappings leave no visible marks on it. We have used the Flip 3 5G on a daily basis for the past one week before finishing this review, and the phone’s display has stayed relatively new - something we couldn’t say for the Fold2. 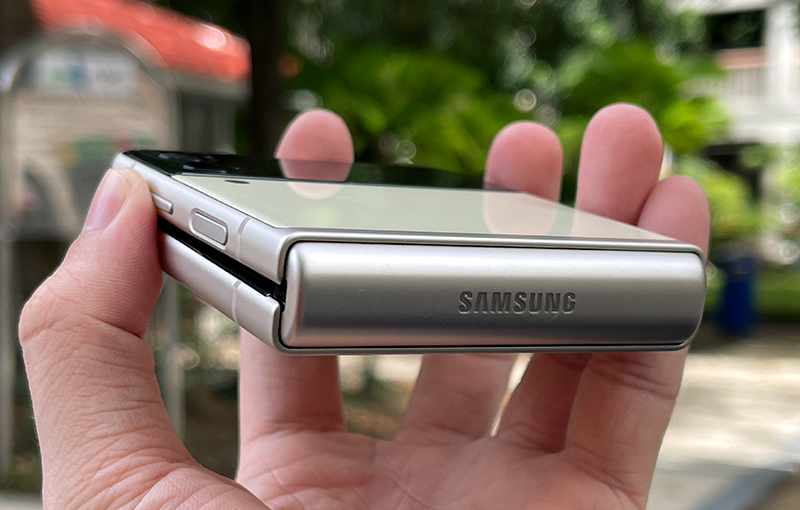 The phone’s IPX8 water resistance offers peace of mind when we’ve used it during a drizzle, and the device hasn’t given up despite the exposure to light rain. However, do note that Samsung’s cautionary label mentioned 1.5m depth for 30 minutes in freshwater, and we are not confident it can withstand spilled coffee, sea water, or your pet’s drool very well. Also, the “X” in its IP rating means it’s not certified for dust resistance. 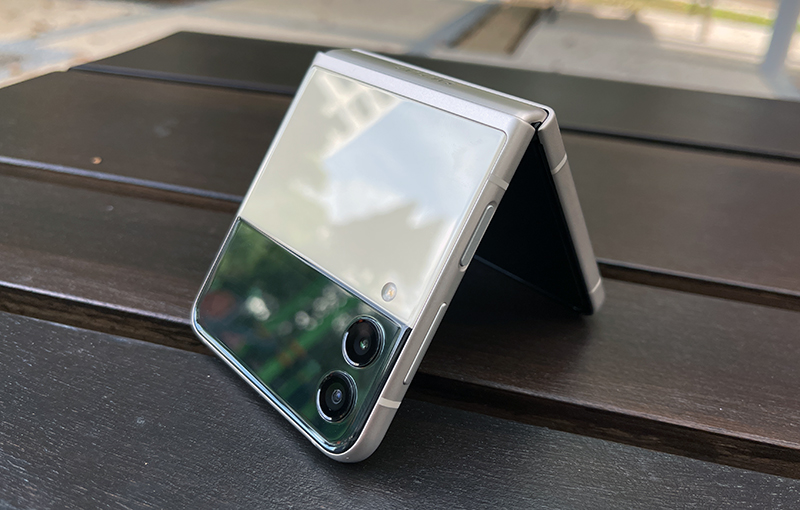 If you’re hoping to unfold the phone with one hand, too bad. The previous Z Flip phones didn’t accommodate for that, and the new Z Flip3 5G uses the same CAM mechanism for its durability.

In our attempts, it’s possible to wedge a thumb between the two halves to spread the device open, but it’s near impossible to pull off the same feat with finesse when you’re on the move. Let's not forget that if your other hand is occupied with bags or a wallet, unfolding the phone becomes more problematic. 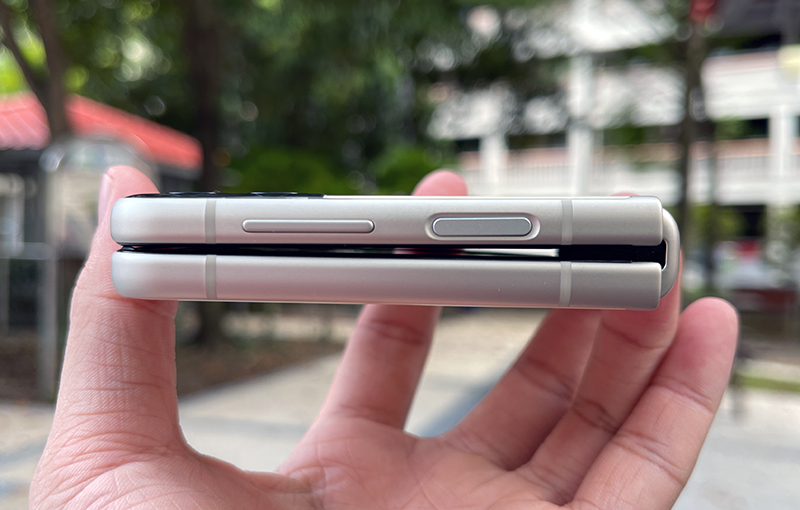 We should also commend Samsung for making the main cameras as flushed as possible. On the older Flip, it had a raised housing rim for its front cameras, but on the Z Flip3 5G, it’s a neat, minimal pair of lenses, with no excessive bumps to ruin the phone’s aesthetics.

Wrinkles in the Z Flip3 5G 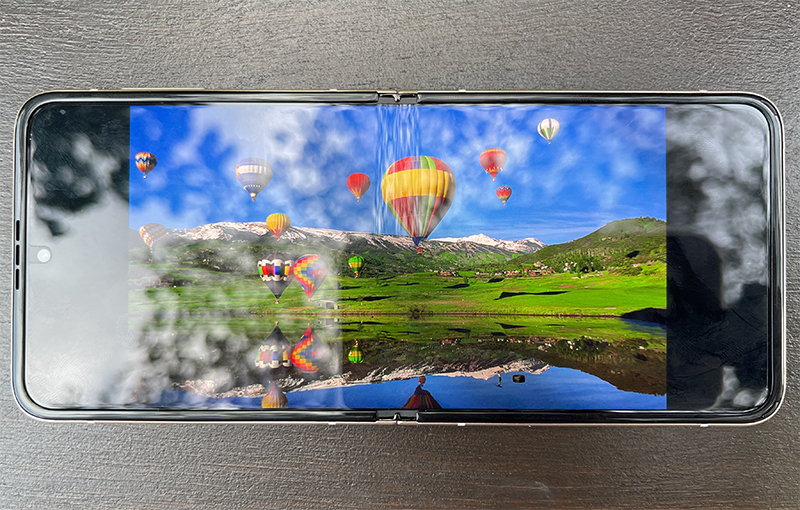 The Main Screen (6.7-inch Dynamic AMOLED 2X Infinity Flex Display) sits at FHD+ (2,640 x 1,080 pixels resolution), with 120Hz adaptive refresh rate now offered on the device. While the display’s name is a mouthful, it does mean that the Z Flip3 5G’s foldable Main Screen supports HDR10+ content, has 100% DCI-P3 coverage for colours, and a bunch of features for a more comfortable eye exposure. These perks are expected in any flagship handset, but we do wish it was at least 1440p so as to set itself apart from the competitors at its price point. 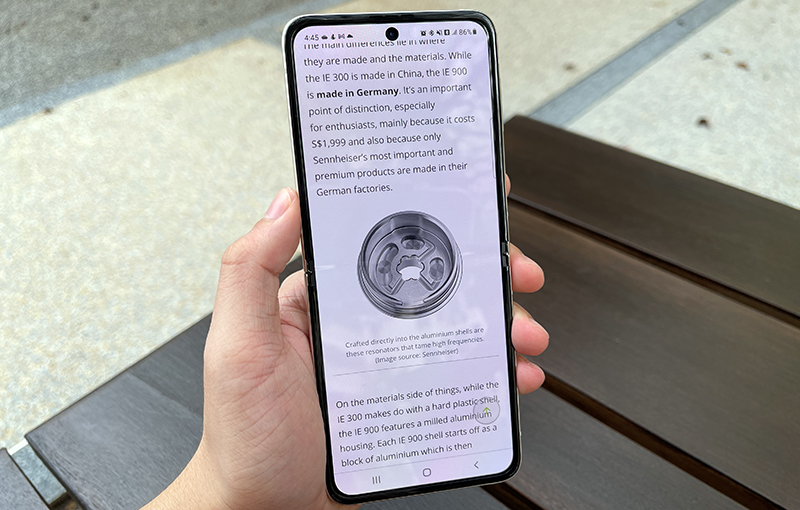 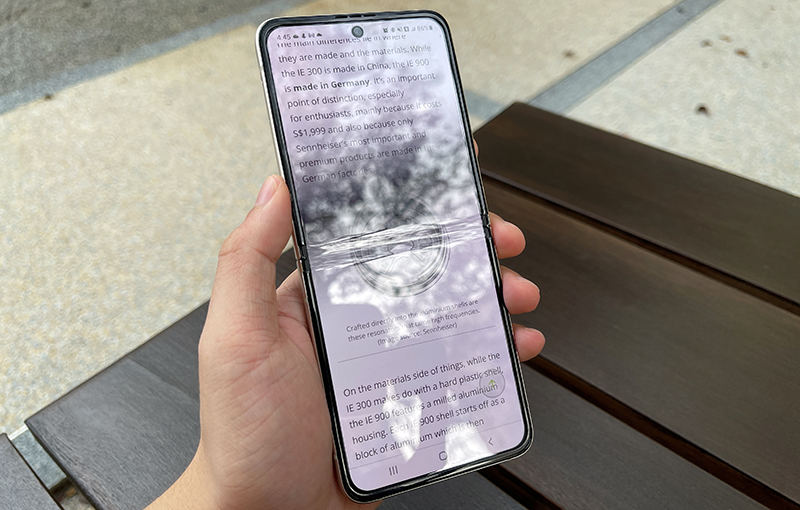 Is the crease visible? Yes, mostly. The Z Flip3 5G’s crease disappears if you’re staring at it squarely, but its viewing angle tolerance is roughly 5 to 10 degrees before you can see the line across the main screen. In my experience, the crease doesn’t severely affect video-watching habits, seeing how I didn’t fidget about much when bingeing shows in bed. But, it’s still not an ideal display experience since phones are meant to be used when on the go. That crease could also be annoying when your photography subject is in the centre of your framing. Samsung needs to find a way to improve the crease’s viewing angles to truly refine the Z Flip3 5G’s overall experience, but this doesn't look like it can be resolved anytime soon as screen technology is still evolving even if it has made it to mass-market flagship phone bracket. 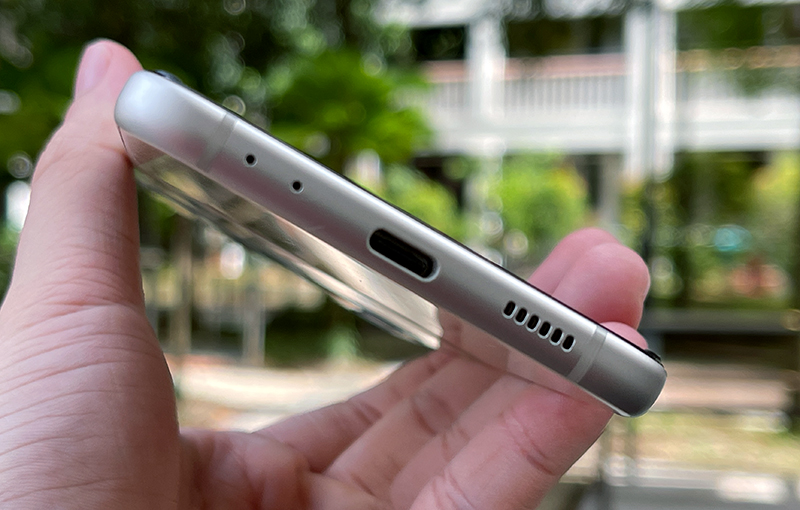 The phone offers dual stereo speakers - one bottom-firing that's positioned next to the USB-C port, and the other being front-firing, and shared with the call speaker up top. While its audio balance is better than mono or single-firing speakers, the two speakers are not on par with each other as the call speaker is noticeably softer in our experience. We suspect it’s configured for portrait handheld mode, instead of the conventional landscape-oriented left-right stereo we’ve come to know and use. There's also Dolby Atmos support but it's oddly toggled off by default. 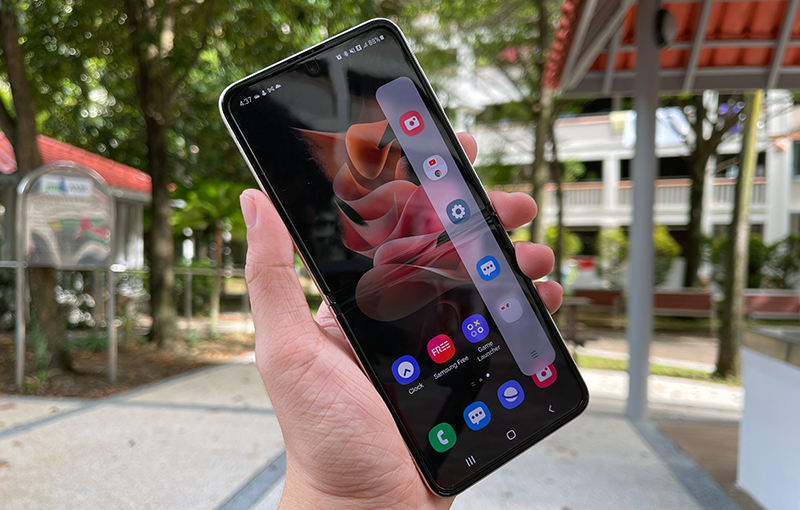 As a Samsung flagship handset, the Android 11 operating system has Samsung’s proprietary One UI interface. It’s congruent with One UI found on the Galaxy S21 series, but it still comes with minimal bloatware. For instance, we understand having certain apps that take full advantage of Samsung’s robust mobile ecosystem (Samsung Health, Galaxy Wearable SmartThings, Samsung Pay), but the Samsung Global Goals app feels unnecessary - let alone having it pre-installed on the phone.

Speaking of apps, the Galaxy Z Flip3 5G offers a hidden Taskbar shortcut that's useful if you wish to open two tabs in the two halves of the display respectively. Unlike the Galaxy Z Fold3’s Taskbar, the one on Z Flip3 5G cannot be pinned, and it's understandable given the display viewing area available (see image above for more context). 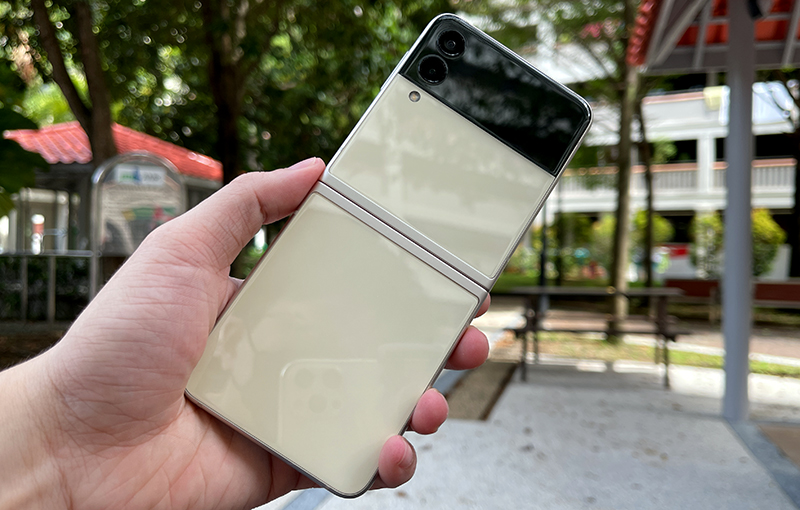 Upgrades, usability and durability aside, the Z Flip3 5G offers one eSIM and one nano-SIM slot, has NFC, and various personal security features (PIN, face recognition, fingerprint, password), which you can set up to have more than one of them active simultaneously to give you an added layer of assurance.