Driving the new Samsung Galaxy Z Flip3 5G isn't a Samsung Exynos processor but a Qualcomm Snapdragon 888 mobile chipset. We’ve already had time with several other flagship phones using this processor. So we've compared them against the Galaxy Z Flip3 in addition to Samsung's very own Galaxy S21+ powered by their Exynos chipset, which delivers similar performance to SD888 powered devices.

We’ve also included the first Z Flip for comparison. As an older device, it packs a flagship 2019 processor by Qualcomm. Finally, the Vivo X60 Pro is also included in our comparisons because it sits in the same price range as the Samsung foldable (or, shall we say...flippable? See what we did there?). 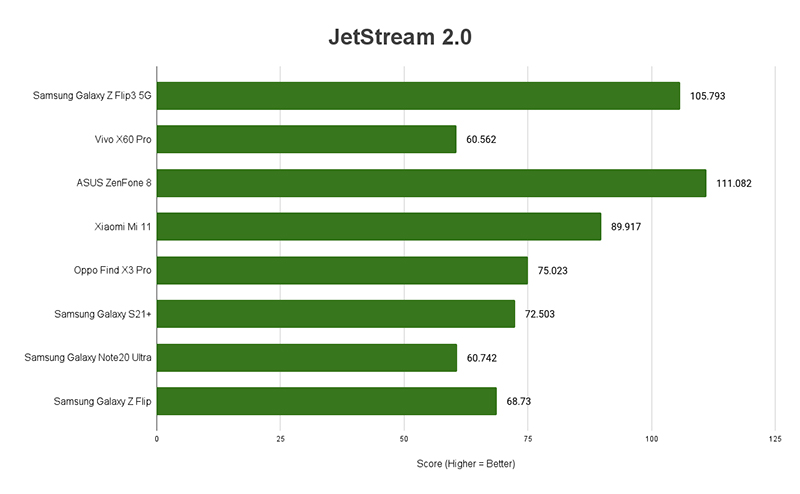 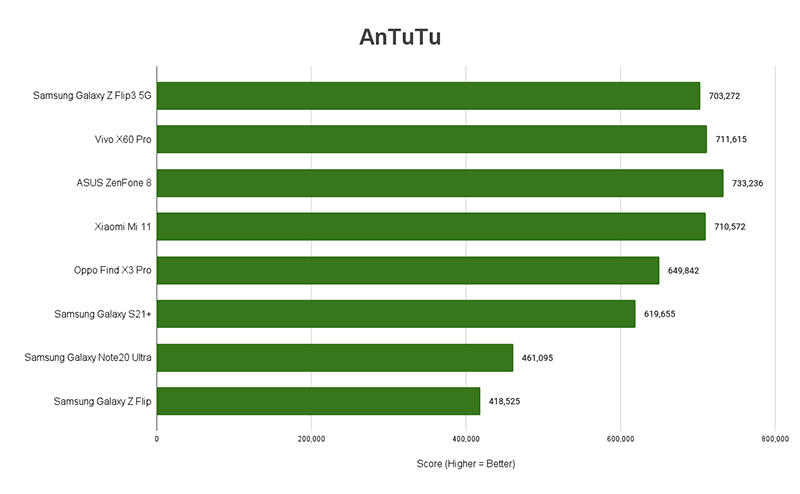 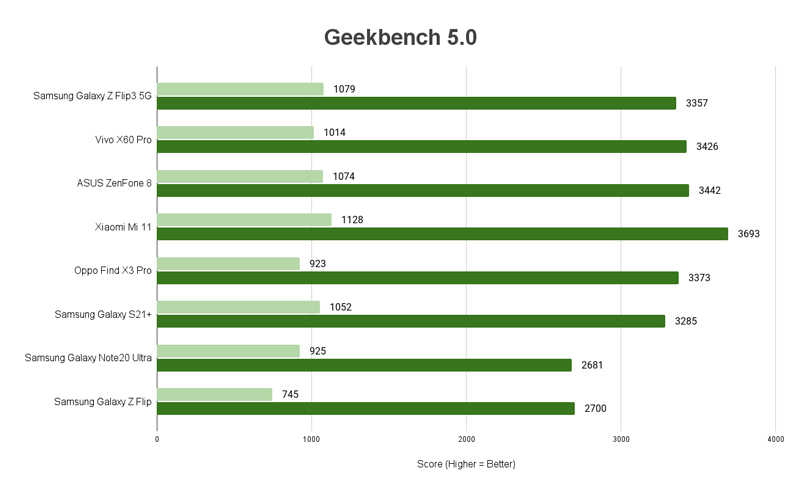 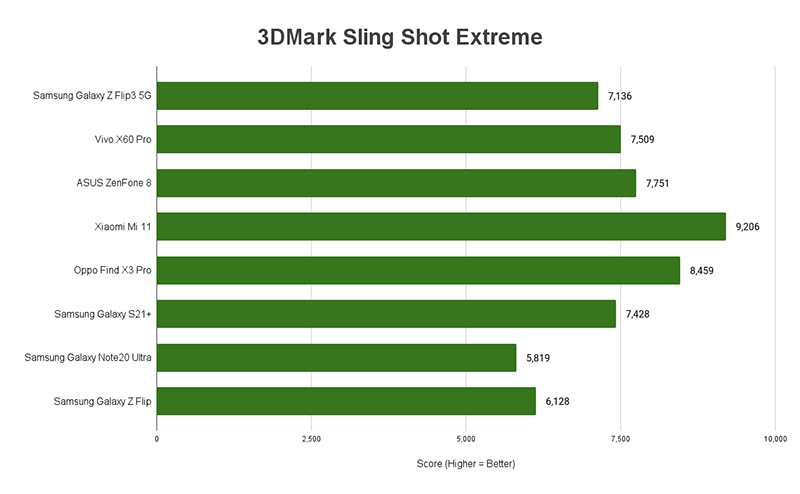 We’re also collecting scores with 3DMark’s new benchmark, Wild Life. Below are the test’s Unlimited Mode scores. The older Samsung Galaxy Z Flip predates this benchmark, and neither does 3DMark or HWZ have scores for that device. 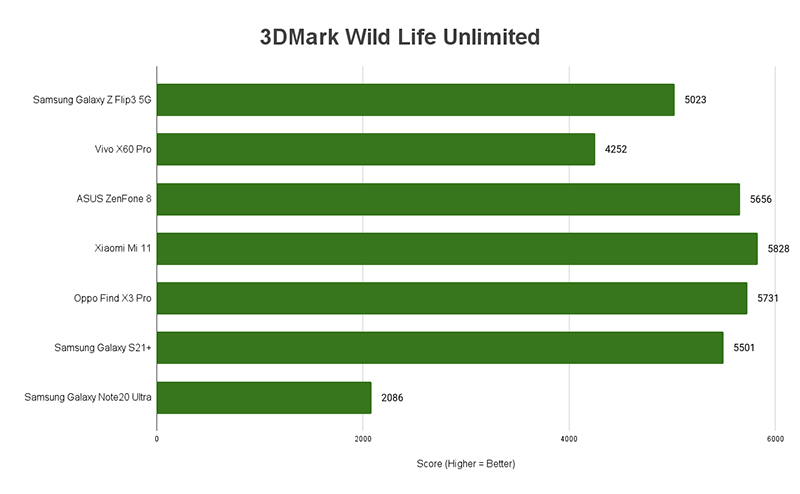 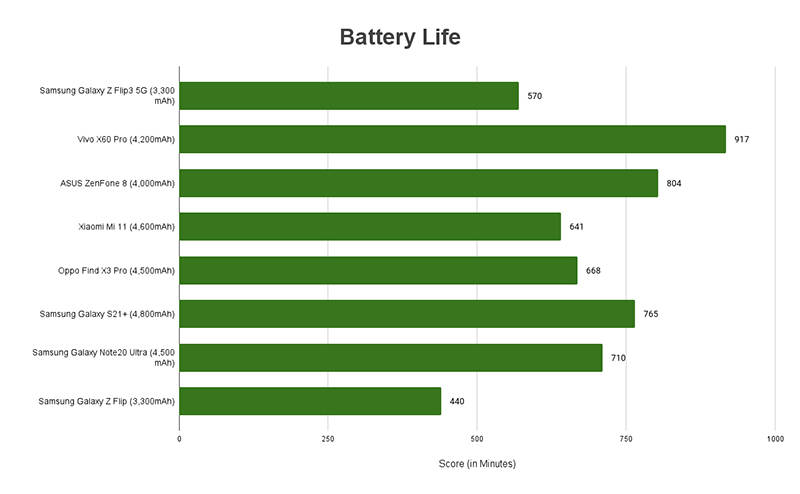 The Galaxy Z Flip3 5G has a 3,300mAh battery capacity, and it clocked in just under 10 hours of continuous loops. While it’s improved from the first Z Flip, the battery is relatively short-lived next to other 2021 flagship devices. The phone consumes a significant part of its full charge under heavy, day-to-day use, but it shouldn’t be an issue if you remember to charge it once a day.

The phone also supports 15W fast-charging and 10W wireless charging, just like its Galaxy S and Galaxy Note counterparts. Our third-party 40W fast-charging wall plug saw the foldable taking 57 minutes to reach 50% charge, and 124 minutes to go from 0% to 100%.

Why did we use an unrelated charger? That’s because Samsung didn’t include a charging adapter in the box, much like how Galaxy S21 series devices also didn’t have one.

Conclusion: Down the foldable rabbit hole you go 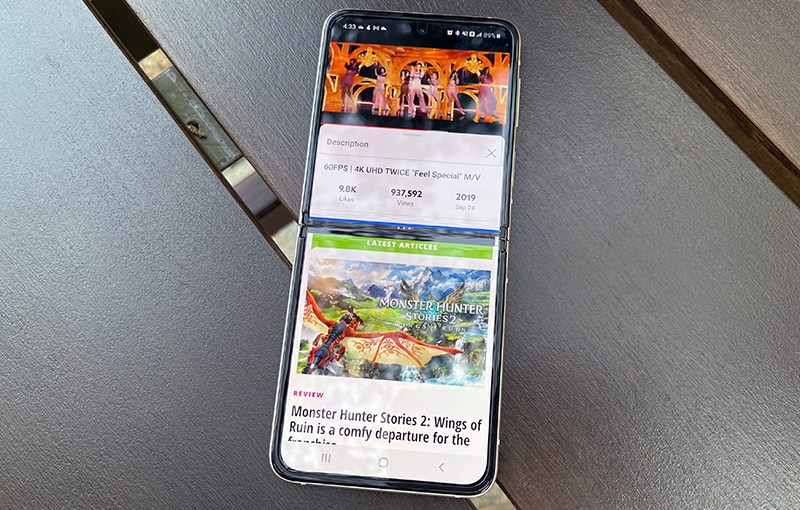 If you’ve been holding out on getting Samsung’s flagship flip-style foldable phone, the Galaxy Z Flip3 5G makes an amazing entry point into these handsets. It’s also a viable (maybe even seductive) candidate for users who want a new experience if they’re moving on from an older flagship smartphone. There's no denying there's a certain cool factor in having the most modern flip phone on the planet with an all-screen front greeting you when it's fully open and having it clammed away with a solid clasp (just like our experience with the first Galaxy Z Flip).

In most aspects, the Flip3 5G is worthy of its mainstream flagship status, with added creativity and functionality from its foldable main display. Our daily use also uncovered how Samsung made good on some of its durability promises, which we have mentioned in previous pages. At S$1,398 and S$1,498 respectively for the 128GB and 256GB models, these are familiar starting prices, making it competitive against many other flagship rivals, including the firm’s very own Galaxy S21 series handsets. Gone are the hefty starting prices, and that makes foldable (or in this case, flippable) phones a serious consideration if it suits your fashion, style and status. 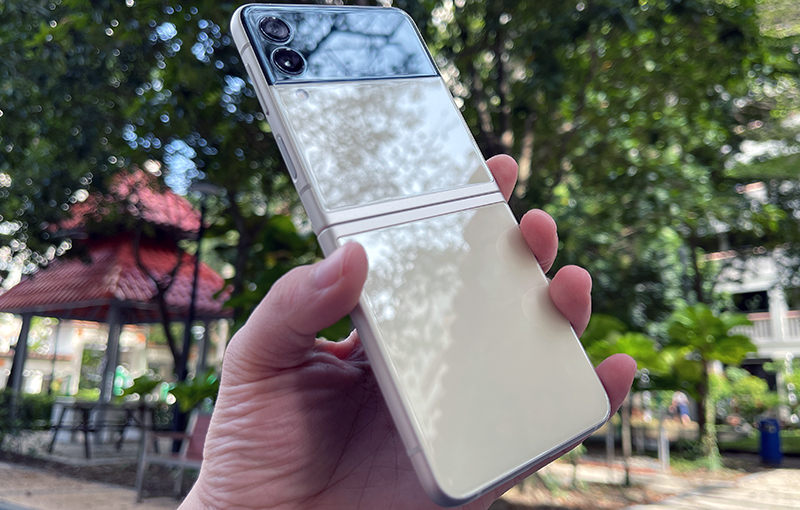 Beyond checking the boxes with an improved Cover Screen, better main screen durability, IP-rated water resistance, and featuring a flagship processor, the foldable form factor confers plenty of benefits if you’re willing to learn and try.

Is a flip phone suitable for you?

Does a flip-style foldable really offer any practical advantage over conventional, single-slate phones? In our experience, it's a soft yes, but that really depends on how creative you are, the type of apps or features you use most, and whether you value having the main screen folded away when the device jostles about in your pocket or bag. Beyond practicality, the foldable display aspect gives a Z Flip3 5G a sense of finality unlike other conventional handsets - you know you are really done with a task (e-mailing, messaging, calling, etc.) when you close the shell and tuck the device away.

That said, the Galaxy Z Flip3 5G isn't without flaws - even if it's due to, we suspect, limitations that's not by Samsung's design. The crease that splits and runs along the main screen will always be visible unless Samsung develops an improved and more durable foldable display panel or find another "folding" method (or even a rollable screen) that makes the crease less obvious, if not eradicate it. Then there's the issue of battery life, which we reckon can be tolerated. Given the existing battery technology available today, Samsung perhaps can be commendable for still cramming in a 3,300mAh battery within a small footprint and deliver more battery life than its predecessor. Remember the Galaxy Note 7's exploding battery scandal that blighted Samsung? Well, something's got to give - and safety should be every smartphone's manufacturer's paramount priority.

But if we want to be utterly sore, perhaps our biggest pain point (and surely and easily fixed by Samsung for future products) is the exclusion of a capable fast-charging adapter. Come on, Samsung. Stop doing an Apple. While at that, it's also time to crank up the fast charging and wireless charging capability (as safely as possible) as the current rates feel a little long in the tooth compared to phone options coming out of China. Otherwise, we think that the Samsung Galaxy Z Flip3 5G is a commendable evolution of the two phones before it - it's a lot more accessible in pricing, has better durability and remains quite easily one of the most stylish phones around. 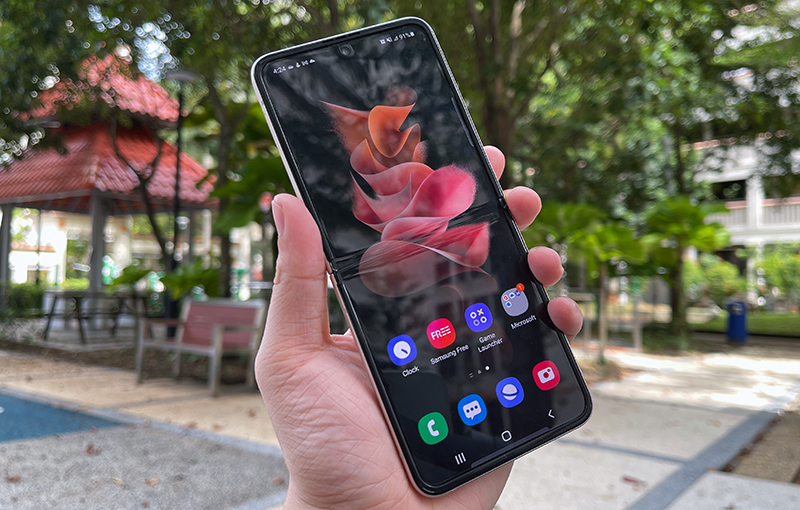 Want to know how to get your hands on one? Don’t forget to look at our pricing and availability details here to see what other promos Samsung offers with its cool foldable phone.