Note: This article was first published on 31st December 2019. 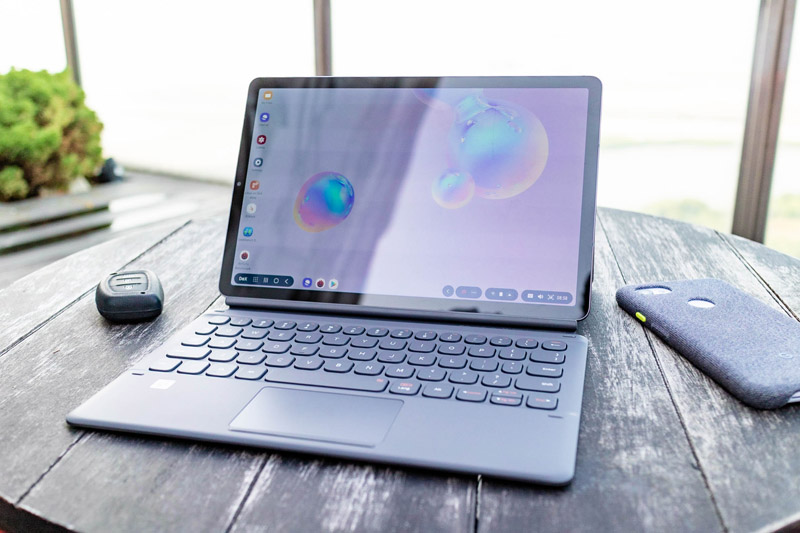 Last year when I reviewed the Tab S4, I was worried that given the dwindling support for Android tablets by Google, the Tab S4 might be one of the last Android tablets that we would ever see. More so, Google has completely pulled out of the tablet market, signalling perhaps that there isn't much a use-case besides a big screen, which will probably be the domain of foldable screen smartphones moving forward.

Thankfully, Samsung continued to hold the fort and released Tab S5e in the middle of 2019. Despite its name, Tab S5e was not the successor of Tab S4. It was a mid-range tablet without S-Pen support.

In August 2019, amidst the launch of both the Galaxy Note 10/10+ and the enigmatic Galaxy Fold, Samsung had also launched the Tab S6, Tab S4’s true successor. Will their new Android tablet renew hopes of a ‘renaissance’, a revival in the interest of Android tablets? Or will it succeed Tab S4 in holding the same title of probably being the last of what Android tablets could truly be?

We spent a couple of months using it intensively, and here's my opinion of it.

It seems that Samsung has silently acknowledged the design flaws that made Tab S4 worse than the Tab S3, went back to the drawing board and made small but substantial changes to the design of Tab S6. The obvious change will be the usage of an aluminium unibody instead of polycarbonate (finally), making the tablet lighter and exudes a more ‘premium’ feel. Indeed, at 420g, it is 62g lighter than its predecessor, at the same weight as mid-range Tab S5e, and lighter than other tablets of similar size, which clearly makes it the lightest tablet in the 10-inch category. (For reference, the new iPad is more than 480 grams.) 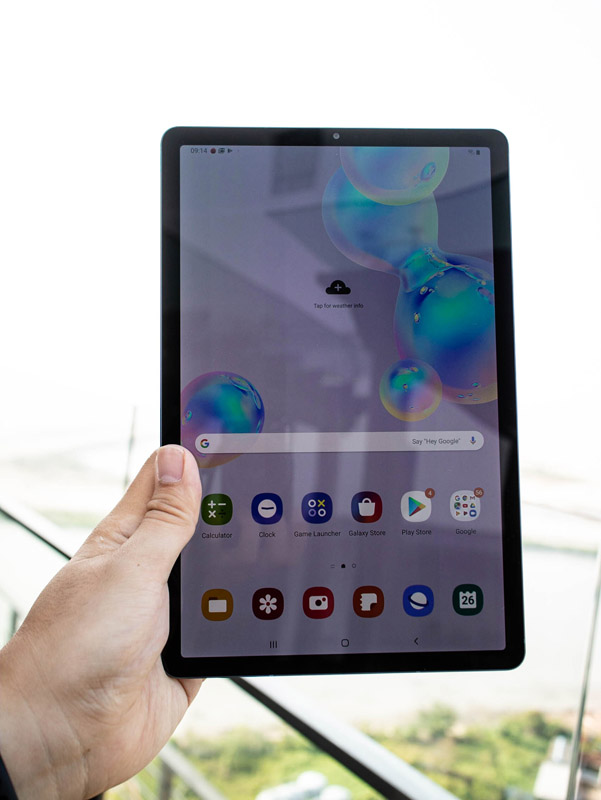 Probably also due to the use of a unibody aluminium build, Samsung managed to shrink the overall footprint slightly. While still sporting the same Super AMOLED 10.5-inch WQXGA (2,560 x 1,600 pixels resolution) screen from Tab S4, Samsung managed to shrink the bezels, making Tab S6 slightly smaller at 244.5mm x 159.5mm. They also managed to significantly slim the tablet to 5.7mm, making it also the thinnest tablet for its screen size. It still has the same AKG quad-speaker setup as Tab S4, maintaining the excellent aural experience I had with Tab S4. 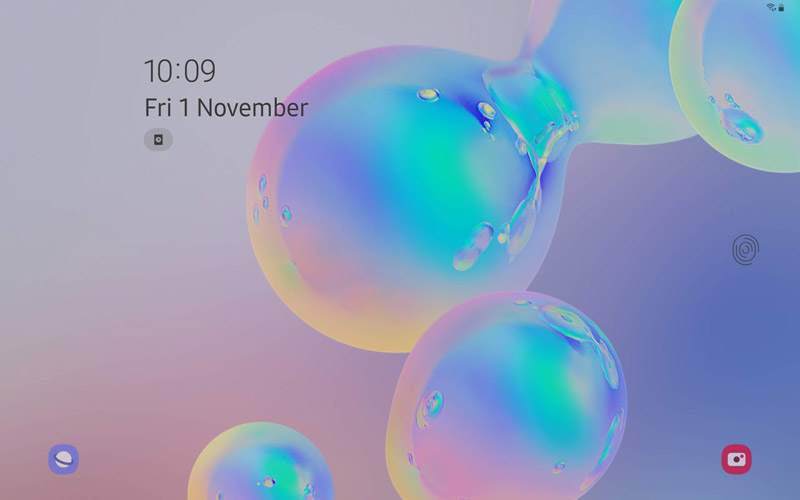 While iris unlock works flawlessly on Tab S4, it seems that Samsung has decided to remove iris scanning technology altogether in their devices launched in 2019, and Tab S6 is no exception. In place of the trusty Iris Scan, Samsung has incorporated an in-screen fingerprint sensor on the bottom side of Tab S6 - the same technology they've implemented in their current flagship devices (Galaxy S10 and Note10 series). The fingerprint unlock is fast, though it remains to be seen if putting on tempered glass protectors would adversely affect the sensitivity of the sensor.

Unfortunately, it also felt like a step backwards. Iris Scan was very convenient while using the Tab S4 and worked charmingly. However, the unlocking experience on the Tab S6 seems to harken back to the Tab S3 days of using physical fingerprint sensor - just that the sensor is now under the screen and in a fixed location. On a phone, fingerprint scanning is relatively near where your fingers might stretch about the device, but on a product the size of a tablet, it's not as convenient. Perhaps if Iris Scan wasn't introduced on the Tab S4, we wouldn't have such comments, but we kind of miss it on the Tab S6. 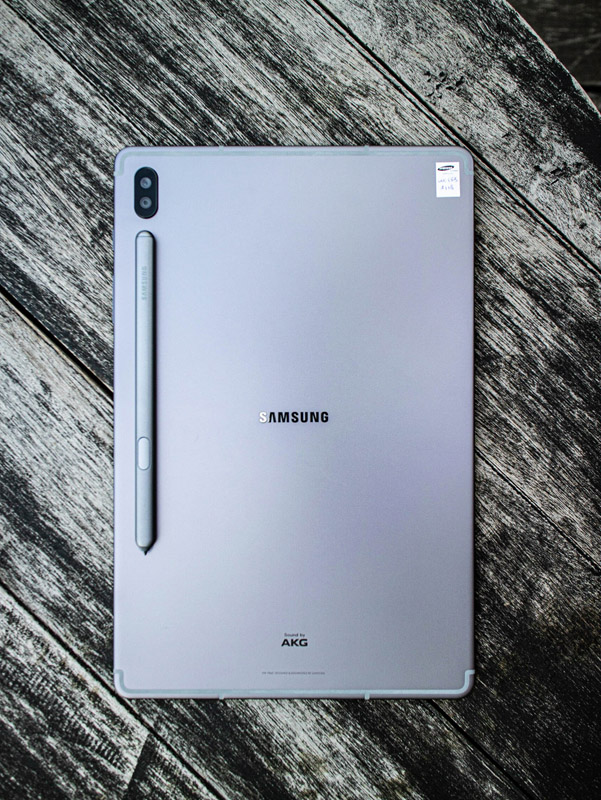 While Tab S4’s S-Pen is classy, there is no way to attach it on the tablet itself, much like the first-generation Apple Pencil. The S-Pen concept was redesigned with the Tab S6 as it shed the classy image and instead returned to a functional design similar to Tab S3’s S-Pen. It is done for a practical reason though - the S-Pen is now magnetic, and the tablet has an inset on its back for the S-Pen to attach itself magnetically.

Similar to the Note9 and Note10’s S-Pen, it also has capacitive charge and the S-Pen can be used as a clicker for presentations or perform gesture actions. To charge the S-Pen, just place the S-Pen on the designated inset, and the screen will display a notification indicating current charge and charging status, which is similar to Apple Pencil 2’s charging mechanism.

The disadvantage the S-Pen holder design is its position; there is no way to put the tablet flat on the surface with the S-Pen attached. The magnetic force holding the S-Pen is also not strong enough to prevent the S-Pen from falling out accidentally. It is perplexing as to why Samsung did not take cues from Apple iPad Pro, who likely took cues from Microsoft's Surface on attaching the stylus to any side of the tablet. The only way to mitigate this issue is to purchase and use the optional Book Cover. 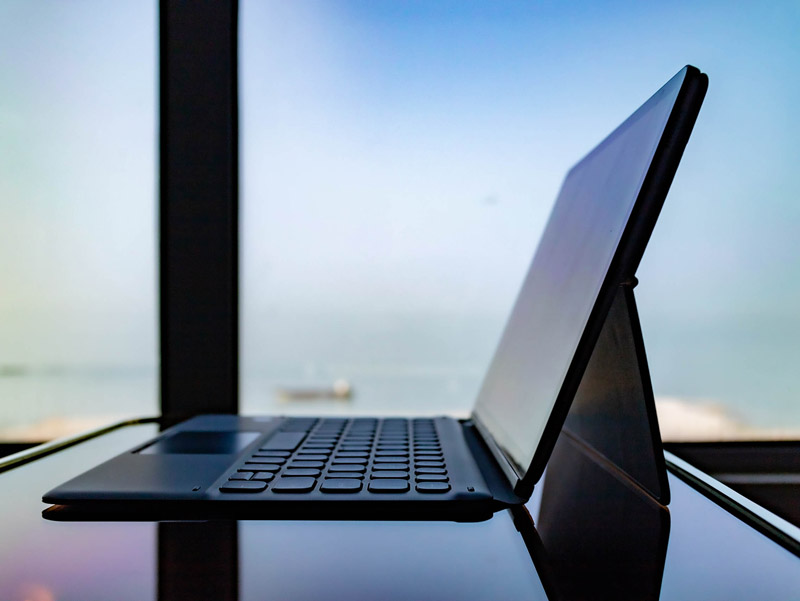 One of my biggest dislikes for Tab S4 is its Book Cover Keyboard accessory. It was huge, clunky, difficult to attach the tablet to, and felt cheap. Good news, Tab S6’s Book Cover and Keyboard, Samsung’s official keyboard accessory for Tab S6, is well polished. Samsung borrowed some design elements from its own 2018 Galaxy Book and incorporated into the Book Cover.

The Book Cover with Keyboard has two parts: one is the actual keyboard cover, which attaches itself directly on the edge of the tablet with the keyboard connector. The other is the back cover, which the user has to stick on the back of Tab S6. The back cover’s purpose is to serve as a kickstand for the tablet, and it also contains a small pocket that encloses the S-Pen holder. When completely unfurled, the Tab S6 with Book Cover keyboard looks like how Microsoft Surface supports itself when in use. 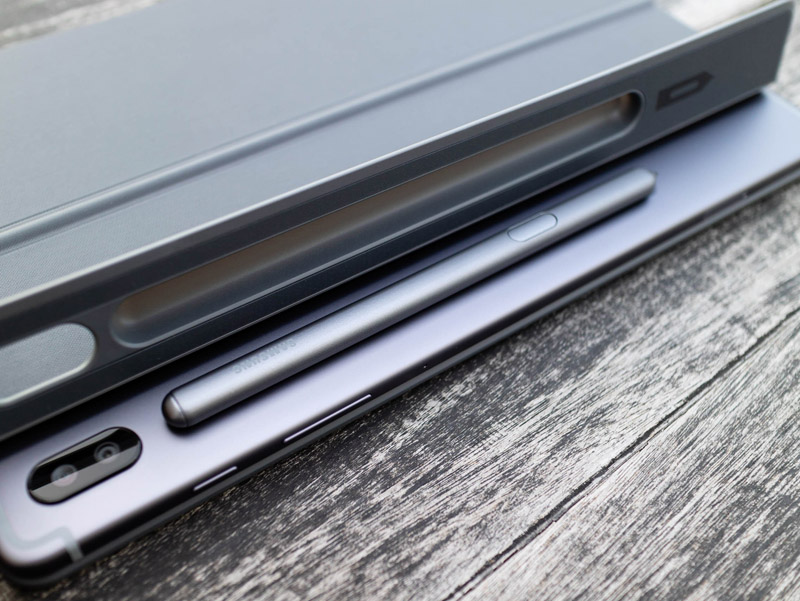 With this change in design, much of the problems plaguing Tab S4’s Book Cover Keyboard has been addressed, including having a touchpad! A touchpad gives users fine-grained control for precision interaction, such as a cursor in a word processor application. 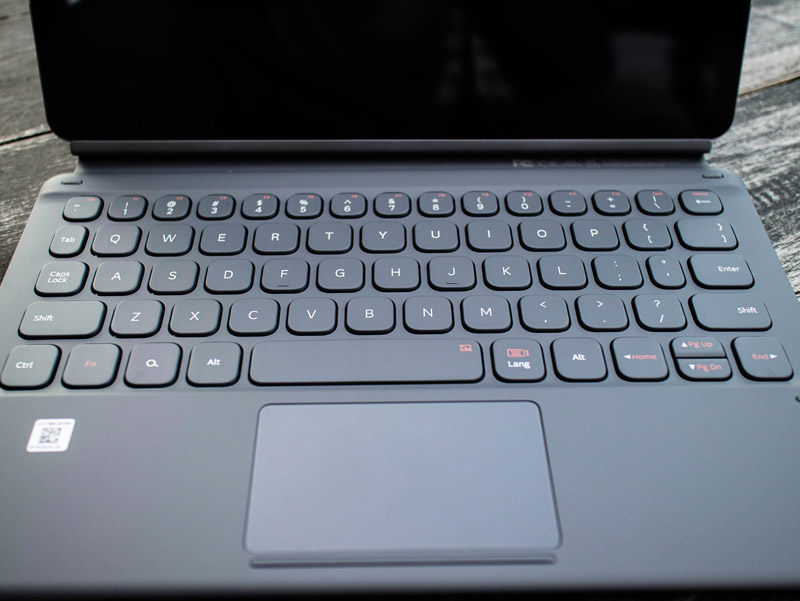 Another improvement is the buffer space between the top row of keys and the screen. On the Tab S4, the design was bad as my knuckles kept knocking on the screen. This is no longer the case when using the Tab S6. 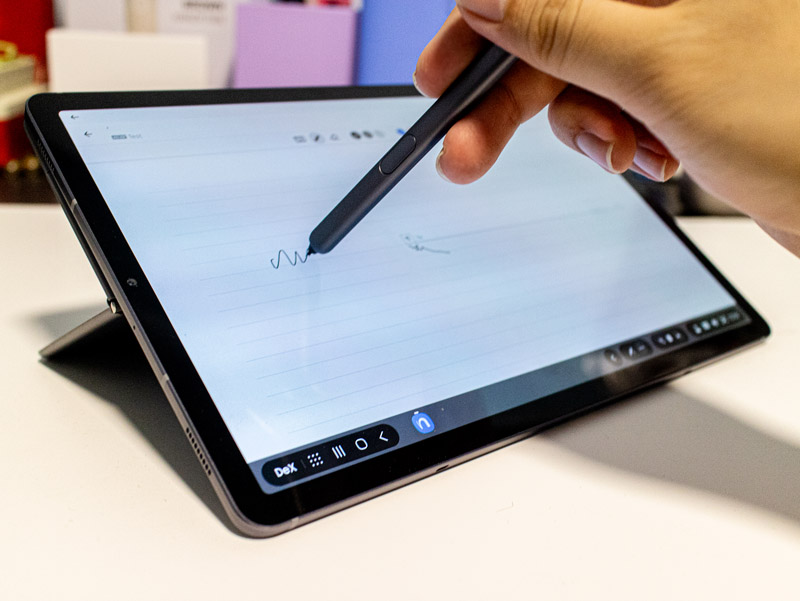 With an adjustable kickstand, it now allows you to control the angle of view of the tablet. Users can even do a "Surface drawing mode" on the Tab S6, if the tablet is detached!

As an example, this time, I tried typing a draft of this review on the Tab S6. While I had to get used to the slightly different keyboard shortcuts, especially in terms of app switching, I was able to finally type most of the draft on the Tab S6 effortlessly. No accidental knocks on the screen, no need to tap on the screen to adjust cursor - the whole typing experience was good.

The Book Cover with Keyboard also slimmed down slightly: with a thickness of 6.8mm and weight of 359g, this yields a total tablet weight of 779g and thickness of 12.2mm. This puts its weight close to an Apple iPad Pro 11 (765g) and even the smaller Surface Go (also 765g) with their keyboard accessories attached, so it's fairly comparable. 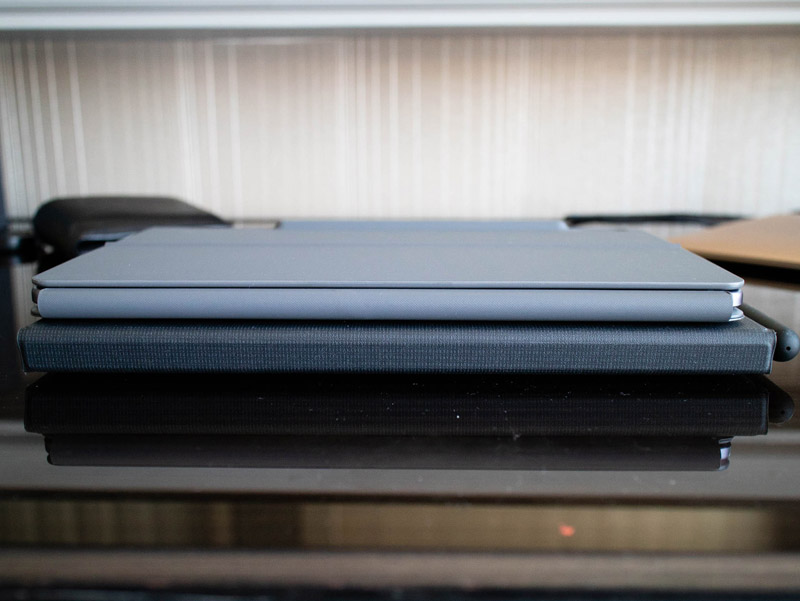 One major caveat of Tab S6 though: the back cover does not stick on the tablet’s back by magnetism. There is actually a strong semi-adhesive layer on the back cover to stick on the tablet. While it is possible to detach the back cover, it takes a lot of effort to pry it off. Considering that adhesives wear out over time, especially with multiple attachments/removals, this forces the user to decide whether to use the Tab S6 as a laptop replacement for long term and sacrifice the flexibility of switching to a tablet-only form, or to indulge in such flexibility at the cost of wearing out the adhesive fast. If the user decides on the latter, he or she must be very careful about keeping dust and dirt away from the adhesive layer too. Overall, not an ideal attachment option. 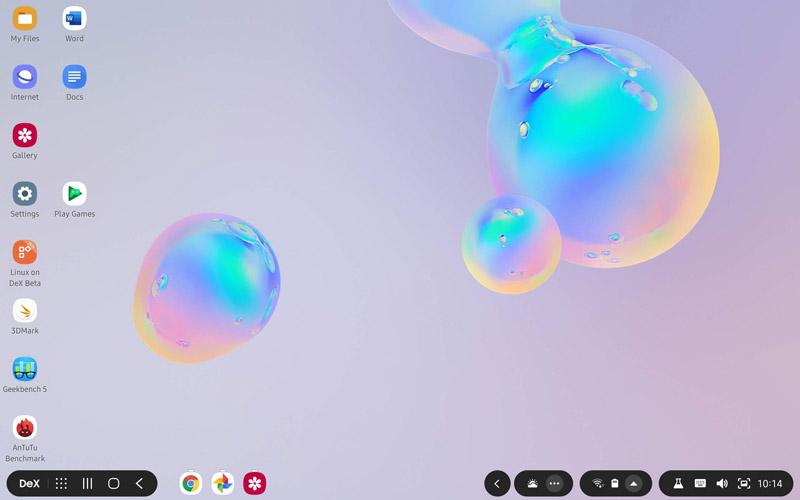 The DeX mechanism on Tab S6 is similar to that of its predecessor: just toggle Samsung Dex and DeX mode will be activated. Similarly, it is still possible to use DeX without a keyboard or mouse, but it is recommended to use the Book Cover and Keyboard for DeX for maximum mobile utility.

One year on since the last review on DeX on Tab S4, one hopes to experience major improvements in DeX mode. However, similar issues still persist. There are some issues that are fixed, such as YouTube’s resizing problem, but others such as the experimental feature of resizing apps isn't optimized for DeX, and still remains as an experimental feature. Fortnite still remains unplayable in DeX mode. The only apps that work - those that matter - are Microsoft Office and Google’s productivity suite of apps, which, taking into perspective, positions DeX awkwardly against Microsoft’s Surface, including the underpowered but still fully-featured Surface Go.

I once surmised that the introduction of Linux of DeX (LoD) can revive interest in the DeX platform. A quick summary of LoD: it is Samsung’s experiment in running actual Linux (Ubuntu by default) on top of DeX. Indeed, a month after the publication of my Tab S4 review, LoD for beta was announced, with support for the then Tab S4 and Note 9, amongst other Samsung flagships at that time.

Unfortunately, Samsung has formally killed the LoD beta since then. LoD would have been a compelling killer feature for on-the-go developers even if it remained as a beta option to tool with.

Samsung previously introduced the concept of launching DeX on one’s personal computer when the device is connected. This adds another mode of usage for DeX. Yet, in another disheartening manner, Samsung did not introduce this function in Tab S6.