DeX on the Tab S4 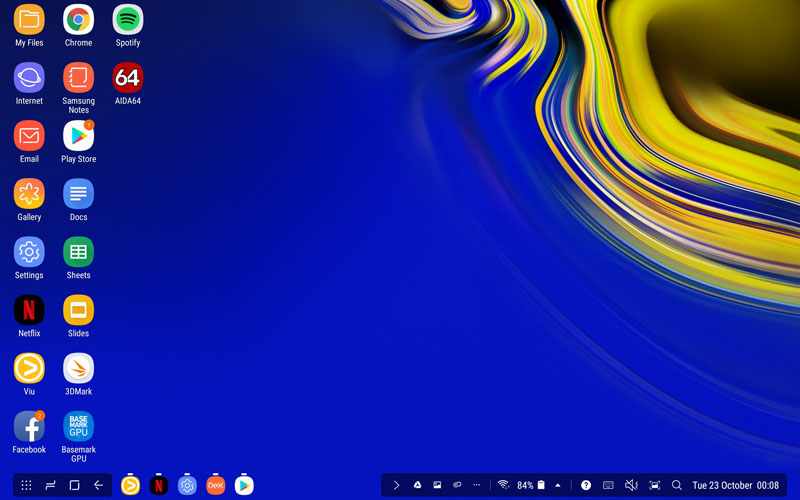 The major new feature introduced with the Tab S4 is DeX, which gives users a desktop-like experience. DeX first debuted on the Galaxy S8, but required a DeX dock connected to a display via HDMI. For a more detailed background on DeX, readers can read our coverage on DeX here.

Like the Galaxy Note9, the Tab S4 no longer necessarily requires a DeX dock, and instead, the tablet itself can be used as the display. Simply toggle ‘Samsung DeX’ in quick settings, and the tablet will transition to full DeX mode. 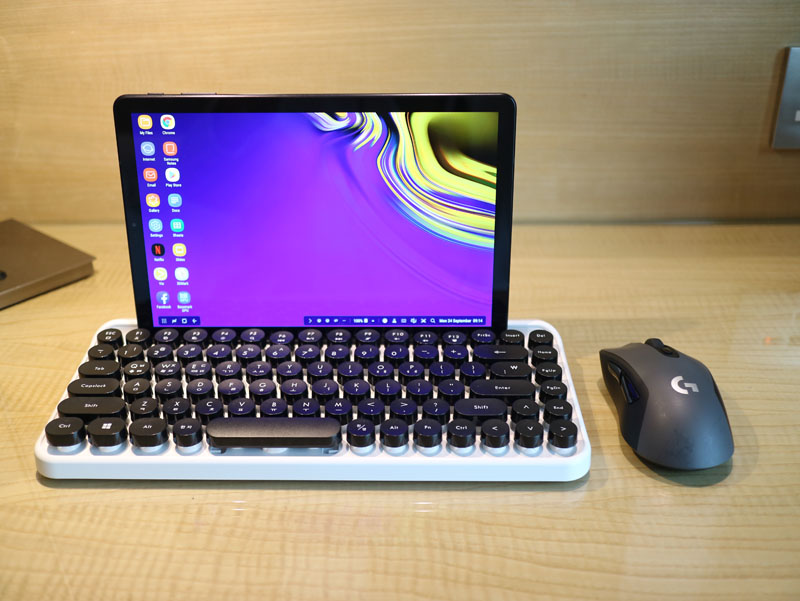 While it is possible to use DeX mode without additional accessories, it makes more sense if paired with at least a keyboard, since DeX is meant to provide a desktop experience. While DeX works with any keyboard and mouse, Samsung recommends pairing Tab S4 with the optional Tab S4 Book Cover Keyboard, which integrates a keyboard into the cover (and this is what I’ve used for this review).

The DeX experience on Tab S4

Unfortunately, many of the issues we encountered with DeX previously still exist. To recap: while Android apps can run in DeX, most apps will still run as though they are running on a mobile phone unless the developer has added DeX compatibility. Some major apps have already done this, such as the Microsoft Office suite, but many other major apps are still not DeX-compatible. One prominent example is Netflix, which, by default, cannot be maximized in DeX mode.

Samsung has tried to address some of these compatibility issues by enabling an “Apps can Resize” option in DeX’s system setting. With this enabled, DeX will try to maximize any app, whether they are optimized for DeX or not. Knowing full well that not all apps can scale well, this feature is hidden under “Samsung Labs” section.

Despite this feature, not all apps scale well. In fact, activating this feature and then maximizing incompatible apps will disrupt the app’s lifecycle, causing it to behave very erratically. Going back to Netflix, for instance, maximizing the app while video is playing will cause the app to keep looping back to the film’s cover page, or simply crash.

Other issues persist too. Some apps, like YouTube, when maximized, are unable to switch back to windowed mode again, unless the app is closed and reopened. Others refuse to work with a keyboard and mouse, with Fortnite being the most jarring example of how the game is completely useless in DeX mode. Sure, unlike the previous version of DeX, the app will still launch, but with system warnings, and indeed, the app will not respond to any keyboard taps.

Sometimes the app will not even launch. This makes Fortnite exclusivity in Tab S4 a pointless endeavor in DeX mode, and I wouldn’t be surprised if there are people out there who bought the Tab S4 thinking they can beat the competition by running Fortnite on DeX with a keyboard and mouse set, only to be sorely disappointed. Plus, it’s really not a great experience holding the tablet to play Fortnite using touch controls, especially when you also consider that the tablet is no longer as friendly from a handling perspective compared to its predecessor. Perhaps Linux on DeX may solve some of these problems, by bringing in an actual desktop ecosystem to Tab S4 and other Samsung devices. However, since it was first announced in February this year, we have yet to hear any updates on its rollout.

How is the Book Cover Keyboard? The Book Cover Keyboard is Samsung’s official keyboard accessory for Tab S4. It also acts as a portfolio case. However, instead of taking cues from iPad Pro’s Smart Keyboard and Surface’s Type Cover, whereby these official keyboards attach to their respective tablets magnetically, Samsung has decided that a ‘Logitech-like’ snap-in keyboard case will be better for Tab S4. When unfurled, this is what the set-up looks like as seen in the above image.

This design comes with certain advantages and disadvantages. On the plus side, the snap-in mechanism ensures that all sides of the tablet are protected in case of a fall. The folded kickstand, with the entire keyboard base supporting the stand, also stabilizes the setup, so it can be used on your lap.

On the other hand, the case makes changing configuration between tablet and ‘DeX’ mode cumbersome, as some effort is required to pry the tablet out of the four edges of the snap-in mechanism.

The Book Cover Keyboard itself is also bulky. Weighing in at whopping 366g with a thickness of 7.6mm, it is actually thicker than Tab S4 itself and is only about 130g shy of tablet's weight. Combined, it weighs a total of 846g with a total thickness of 11.7mm; that's close to or even thicker than most modern, full-fledged ultrabooks such as the HP Spectre and LG Gram, or to compare like-for-like, thicker than the iPad Pro or Surface Go with their own official type cover keyboards attached.

While Samsung positioned the Tab S4 as providing a full PC experience when paired with the Book Cover Keyboard and DeX mode enabled, there is, however, one critical component that the Book Cover Keyboard lacks: a touchpad. Anyone who has used a laptop knows just how important a touchpad is, as it gives the user fine-grained control over the position of the mouse pointer. Without a touchpad, a user has to use his/her fingers to touch the screen every time for an equivalent ‘mouse click’, and this can be terribly frustrating at times.

The top row of number keys is also situated too close to the screen. As a result, there are times where your knuckles might accidentally touch the screen when typing documents.

As an example, I initially tried to type this review using Microsoft Word on this tablet, in DeX mode. Even though the app is DeX compatible and well designed, I sometimes have to correct words previously typed, which is done by first positioning the cursor over the word to be corrected. While such action is completely trivial with a touchpad, it is frustrating to accurately position the cursor using a finger. I also encountered many times where the cursor jumps to a random part of the document because my knuckles knocked on the touchscreen while typing. Eventually, I just gave up and used my Surface Go to finish the review.

In short, the Samsung Book Cover Keyboard isn't as ideal of a companion as Samsung would have you believe. Of course, these issues I've gathered can be mitigated by not purchasing it and using my own keyboard and mouse set of choice, but at the same time, this is a knock from offering a complete and compelling ecosystem directly from Samsung.