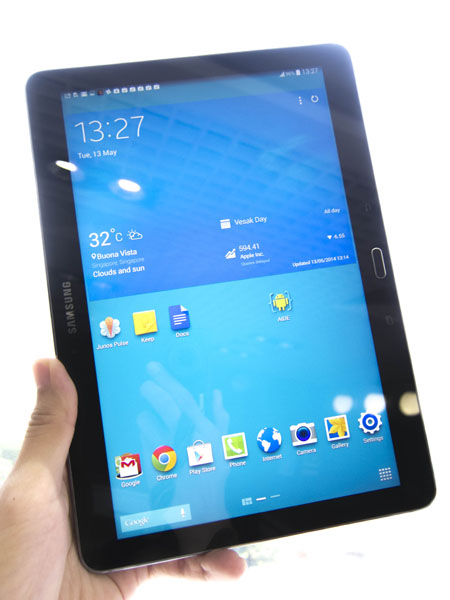 It goes without saying that Samsung has been aggressive on almost all fronts of consumer technology products. This year however, we've noticed the Korean giant is also making an active effort to secure a space among your office assets, be it an enterprise-class business laser printer, or a tablet that's designed with more productivity features in mind that would appeal to both casual usage and work needs - great for an office environment that supports the BYOD (bring-your-own-devices) movement. Talking about the latter aspect, the slew of Galaxy Note Pro and Tab Pro products that were launched at the Consumer Electronics Show 2014 saw the adoption of a new media consumption interface, as well as a stronger push for business oriented features like multitasking via Multi Window and being bundled with numerous paid productivity apps worth hundreds of dollars. 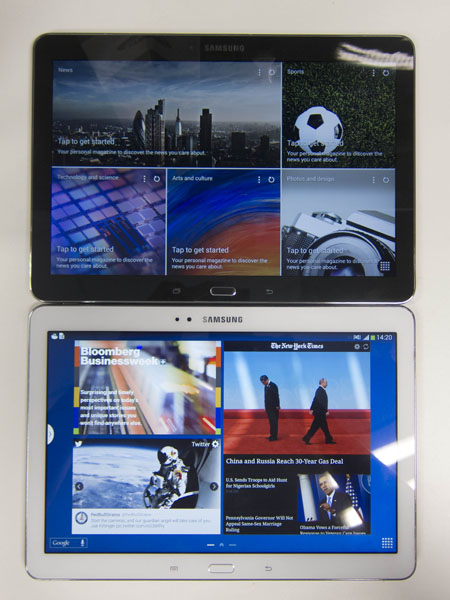 Design-wise, the Tab Pro 10.1 looks like an exact replica of its S-Pen bearing counterpart, the Note 10.1 2014 Edition. Both have the faux-leather material at the rear, the same placement of the buttons (power, volume control) and stereo speakers at the side. While the faux-leather finish is just the outer finish, the backing is still plastic, but at least its not raw polycarbonate with gloss finish of some of the cheaper tablets. You'll also find a chrome lining that goes around the sides of the tablet just like its other Tab Pro and Note cousins which gives the tablet a touch of class. Since the Tab Pro 10.1 resembles much of the Note 10.1 2014 Edition, we will not go into great length about its design. You can check out the review of the Note 10.1 2014 Edition for more information.

If you are hoping to find a micro-USB 3.0 port on the Tab Pro 10.1, you will be disappointed to know that it is exclusive to Note series of tablets and their top tier smartphones like the Galaxy Note 3 and Galaxy S5. Fortunately, you'll still get a micro-USB 2.0 port at the bottom of the tablet for some flexibility in data transfers. 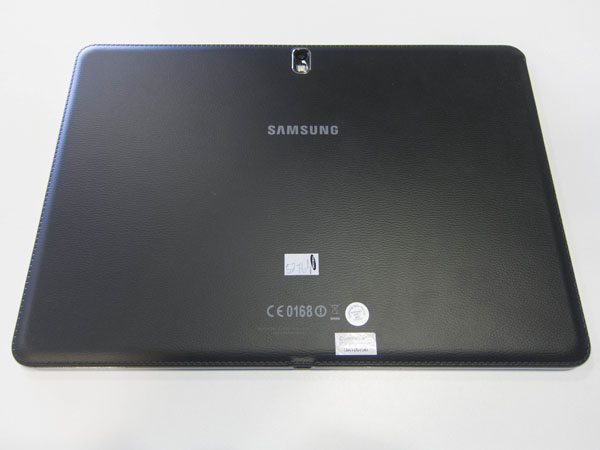 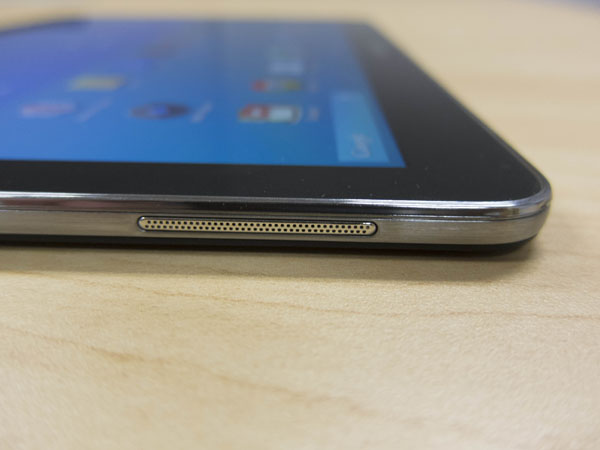 The layout of all the various ports and speakers are also standardized across all Samsung tablets. For the Tab Pro 10.1, buttons are laid out in landscape configuration. Similar to its Note and Pro cousins, the power and volume buttons are placed on top of the tablet, with a quirk: when in portrait, the top volume button lowers the volume, and vice versa. The speakers are placed on both sides of the tablet, making stereo playback of videos in landscape mode possible. 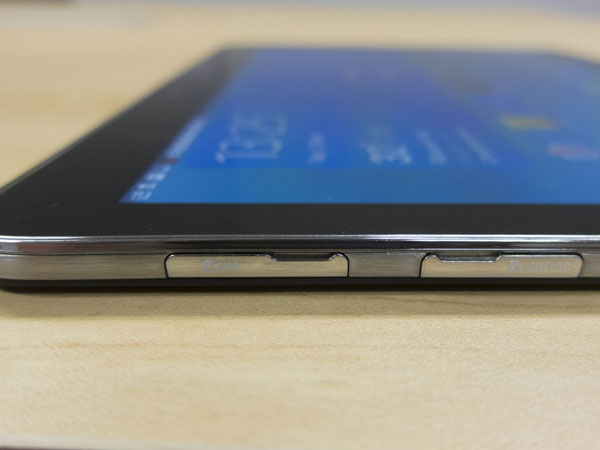 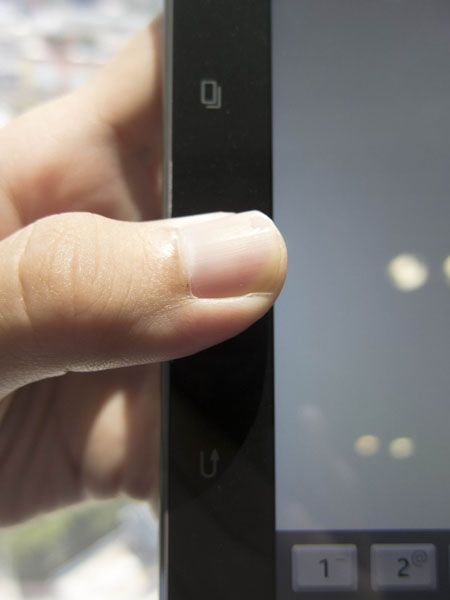 However, there is a downside to such standardization as it brings along the same set of quirks. For example, the implementation of a physical home button in the middle of two capacitive buttons does not make sense when using the tablet in portrait mode. You are more likely to accidentally tap on one of the buttons and interrupt your activity. This will adversely affect productivity, especially since the most common tablet use case is to read e-books or documents - in portrait mode. 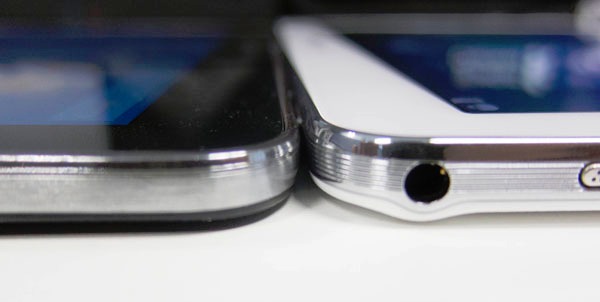 Notwithstanding that, the tablet feels light at hand, despite it boasting a 10-inch screen. Weighing at 477g (for the LTE model), the tablet is almost the same weight as the cellular model of the Apple iPad Air (476g). Measuring at just 7.3mm in height, it is just a hairline thinner than the iPad Air and its Note cousin. The faux leather back definitely exudes a sophisticated feel, making one feel as though they are holding a leather-backed document folder when reading a document.

The Tab Pro 10.1 sports a 10.1-inch (2,560 x 1,600 pixels) Super Clear LCD, similar to its Note cousin. This is expected, given that the latest generation of high-end tablets are equipped with screens of WQXGA resolution just like the Note 10.1 2014 Edition. However, Samsung is allegedly reserving Super AMOLED panels for its upcoming tablet(s).

With a pixel density of 299ppi, reading documents on the tablet feels close to natural, and not of a jarring experience. The accurate reproduction of colors also allows a realistic viewing experience. Viewing angles are decent as well. 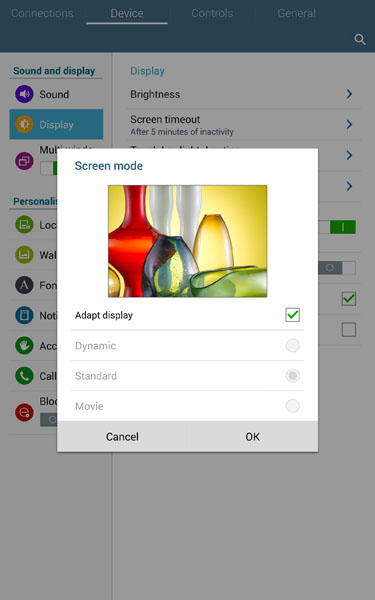 Similar to its other Tab Pro and Note cousins, there are three types of display output presets: Standard, Dynamic, and Movie. One can also set adaptive mode, whereby the tablet will optimize the colors according to the palette used onscreen. This works only for stock apps, however. 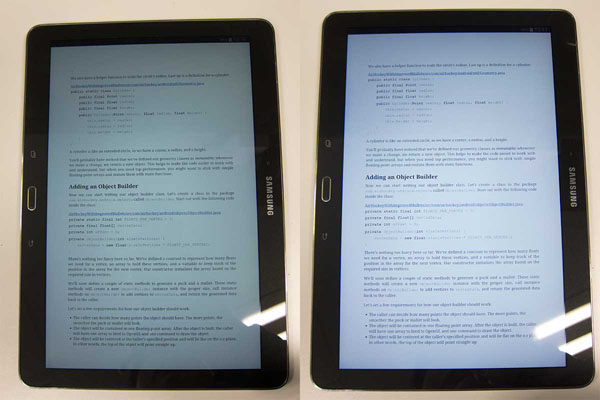 There is also a Reading Mode, whereby it optimizes the background color by making it soothing for the user. However, the user must manually select the app to utilize this feature. A quick test was done on text with white background. When reading mode is activated, the white background does take on a warmer tinge, thus reducing the glare. This mode first debuted on the Samsung Galaxy Note 8.0 where we've also compared of its effectiveness. 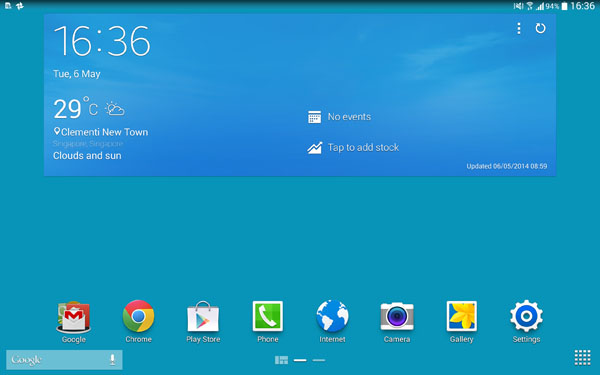 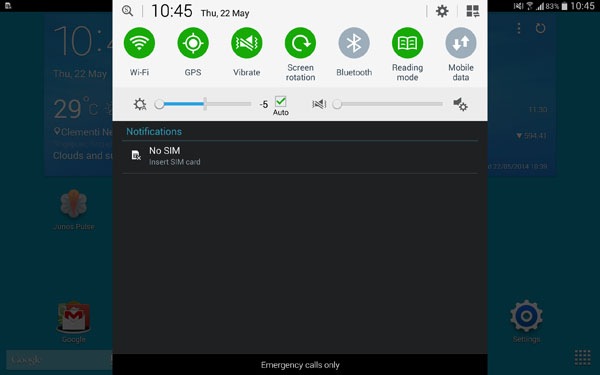 The Tab Pro 10.1 comes with Android 4.4.2 (KitKat), and overlaying it is the latest iteration of Samsung TouchWiz which is also present in the other Tab Pro series. The updated TouchWiz interface resembles that of Windows 8’s design philosophy: clean, flat icons, dialogs and drawers. Despite the beautiful design, the TouchWiz overlay results in some occasional stutter, especially when rotating the screen with an app running. Launching multi-window apps can take some time, sometimes up to a second. While it's not a delay that you can't put up with, one doesn't expect such stutters from a mainstream flagship tablet device with the latest hardware and software.

Apart from visuals, the Tab Pro comes with Magazine UX, a homescreen replacement that displays tiles containing information such as news, weather, and calendar. The design of Magazine UX eerily resembles that of Windows 8's Modern UI, and also that of Flipboard. While it looks aesthetically pleasing, one caveat is that the user is unable to to disable it if he/she isn't interested to use it. For more visuals of what it looks and feels like, tune into our article early in the year where we've previewed it. We've also got a video overview of what you can do with the new interface when the Galaxy Note Pro 12.2 LTE tablet debuted:- 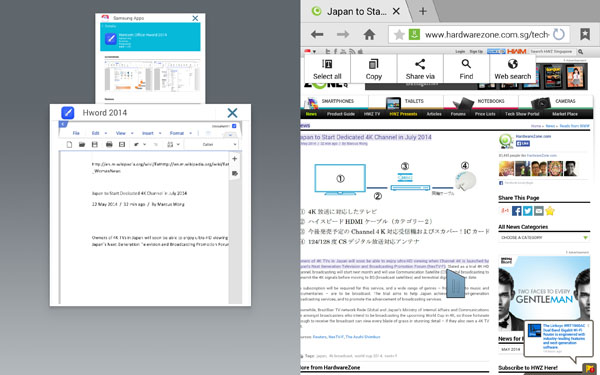 Similar to its predecessor, the Tab Pro 10.1 has a Multi Window function which supports two app windows side-by-side. You can open two windows of the same app although this is restricted to certain apps only. One can also toggle between the apps previously opened within the pane. You can also directly drag text or images across the two panes, and the contents will be instantly copied over. However, not all apps support this function; when we tried dragging a text string from Chome to Hancom, the website’s URL was copied instead, whereas there was no issue when dragging from Samsung’s stock browser. 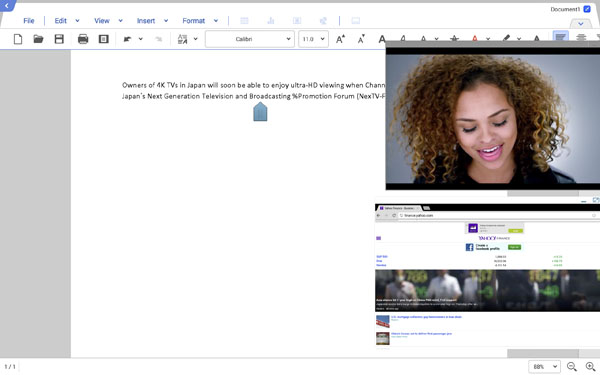 One major improvement over its predecessor is the introduction of pop-up windows. Besides being able to place apps side-by-side, one can also launch apps in a pop-up window, much like an un-maximized application in a desktop O. Now you can watch Youtube and read news while typing a document! The pop-up apps can be minimized into icons resembling Facebook Messenger chat heads. 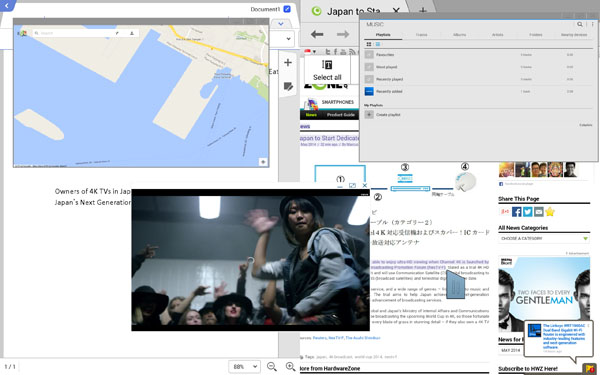 However, there are limitations: only a small subset of apps support this feature, and even so, only up to 3 pop-up apps at a time. Good thing is, launching pop-up windows can be done on top of having existing multi-window panes. Thus, one can theoretically run up to five apps simultaneously. However, there’s little use in opening so many windows, as can be seen in the screenshot above. Not to mention, the whole tablet responds sluggishly with many apps running.

Unlike other stock keyboards in existing tablets, the keyboard in the Tab Pro version has the Ctrl key, along with Tab, Del, Caps Lock and Shift keys, which are traditionally found in desktop keyboards. Such keys are commonly used in word processing, programming, and remote scripting. With the inclusion of such keys on the tablet, one will be able to easily compute on the go, especially in the author's case who needs access to remote servers often when on the move.

However, there is a slight caveat: while it is indeed possible to use "Ctrl-C" and "Ctrl-V" keyboard shortcuts for copy and paste function respectively, there are certain apps, most notably in the bundled Hancom Office, whereby it is not possible to "Shift-Arrow Key" to select a large chunk of text for further actions like copy/move/delete. While this may seem to be a small oversight, it will have a big impact on Samsung’s positioning on the Tab Pro series as a productivity-oriented tablet. 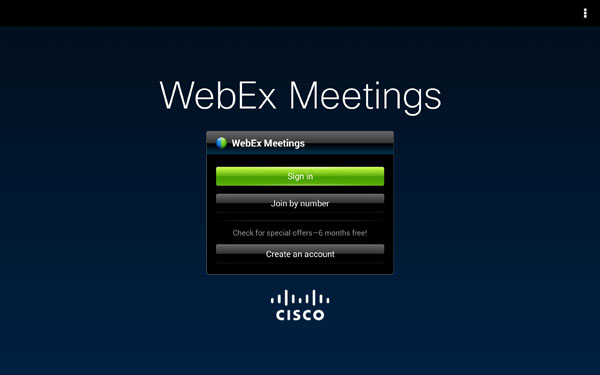 Having positioned the Tab Pro series as business-centric tablets, it comes as no surprise that the Tab Pro 10.1 comes bundled with enterprise software. One app of interest is Cisco WebEx. It enables enterprise-level video conferencing, and collaborative sharing of documents and presentations. A number of large enterprises and agencies utilizes this for remote web conferencing, and hence the Tab Pro is indeed equipped with suitable functions and software an organization. 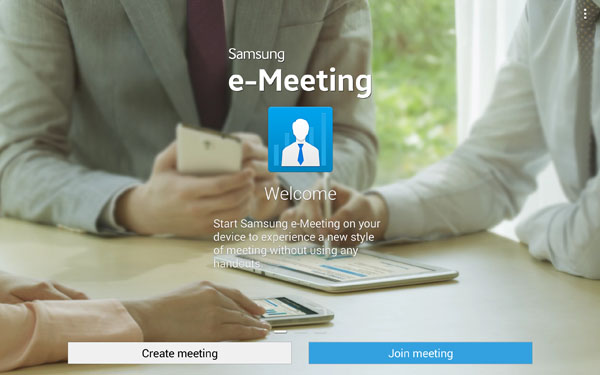 Another app worthy of mention is the Samsung E-Meeting, a solution for companies which are not equipped with Cisco WebEx. Samsung E-meeting app essentially allows real-time collaborative discussion in a conference or meeting room setting, all without using paper. All users just need to connect to the same Wi-Fi network. This allows real-time feedback from meeting participants, whereby they are able to e-annotate on their device, and their feedback immediately shown to everyone else in the meeting. However, this app only works on the Tab Pro and Note Pro series at the moment, and thus may not be viable for cost-conscious companies with existing mobile devices. To truly benefit from this app, your entire business unit or organization should ideally be issued with the Pro series of Samsung tablets. 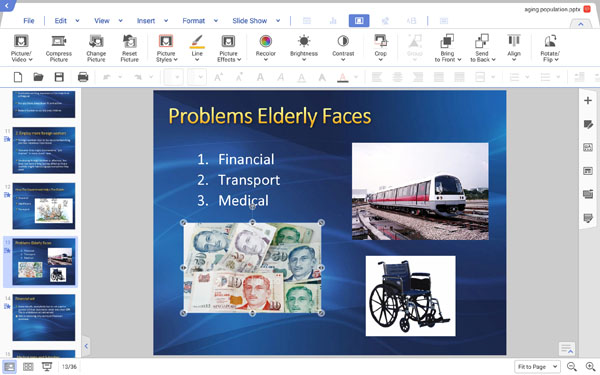 Another noteworthy app is the Hancom Office Suite of apps. Koreans will find Hancom familiar, as they are the office productivity suite of choice amongst Koreans. The suite mirrors Microsoft Office, with nearly all the functions available (other than a few minor ones, like Keep Lines together in a paragraph, etc.). Also, relative to many other Android office productivity apps, Hancom Office suite can reproduce the contents within Microsoft documents with the highest accuracy, almost as though Microsoft Office was used. So far, we have yet to encounter major formatting issues when opening and working on a file created in Microsoft Office.

On a side note, we've used Samsung's E-Meeting and the Hancom Office Suite extensively during a HardwareZone members-only event for the debut of the Samsung Galaxy Note Pro 12.2 LTE tablet; so if you're interested on how we made use of the apps in the event, check out the linked article. 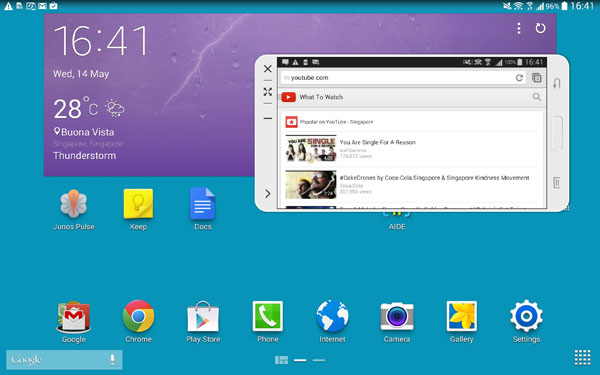 There is also a Samsung Remote PC app, which allows remote access to one’s PC. However, as there are several other free solutions that are not locked down to Samsung mobile products, nor to the Windows OS platform, we won't be covering this app in further detail.