*Updated as of 25th April 2013 - Originally published as a preliminary review on 24th April, we've since completed all our tests and updated the article to a full review, complete with ratings. For those who've read our article previously, you can jump direct to our Performance and Conclusion pages.

Is The Next Galaxy Really Here?

Samsung unveiled the Galaxy S4 at a launch event in New York which saw its features being explained in a Broadway show style. While we were told at the event that Singapore would be getting the device in May, our reliable sources informed us that the Galaxy S4 was on track to be available on 27 April which turned out to be true.

The Samsung Galaxy S4 arrives at a time where competition is at its stiffest, with the Sony Xperia Z having an early start in March and the HTC One only available less than two weeks ago. Can the Galaxy S4 replicate the success of the Galaxy S III and soar to greater success? That's the million-dollar question our review will attempt to answer. Before you read on, here's a quick look at its specs:

There is nothing to shout out about the design of the Galaxy S4. If you place the Galaxy S4 besides its predecessor (Galaxy S III) and look from afar, it may be tough to differentiate the two devices. For that matter, non-techies can also easily mistake it for the Galaxy Note II as the phablet is hardly any different and it isn't much larger than the Galaxy S4. For a company which prides itself on bringing more innovation to the market than its competitors, this is certainly a let-down.

If you recall, Apple was slammed badly for introducing the iPhone 4S without a design revamp. To ascertain our sentiments, we checked on the Samsung Galaxy S4 discussion thread in our forums and found some users (1) (2) (3) sharing our same views:

Forum member balzebub - "kind of disappointed, looks so much like s3 and note 2..." 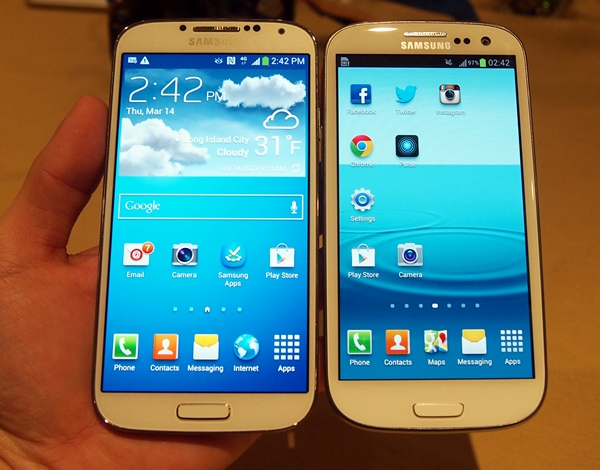 For those who can't tell the predecessor apart from the new Galaxy S4, there are slight physical modifications on the newcomer such as slimmer bezels, a narrower, slimmer and lighter chassis. Considering that Samsung had to fit a slightly bigger display, it's quite an impressive engineering feat that their team managed to pull off.

The chassis is mainly made up of polycarbonate (also simply known as plastic), which isn't the most ideal of materials one would use for a flagship device. The disparity in build quality is quite apparent when you compare the Samsung Galaxy S4 with the HTC One and Sony Xperia Z - both of which offer more premium design, build and finish. On the other hand, the Samsung Galaxy S4's slimmer form factor does help in offering a slightly better overall handling. 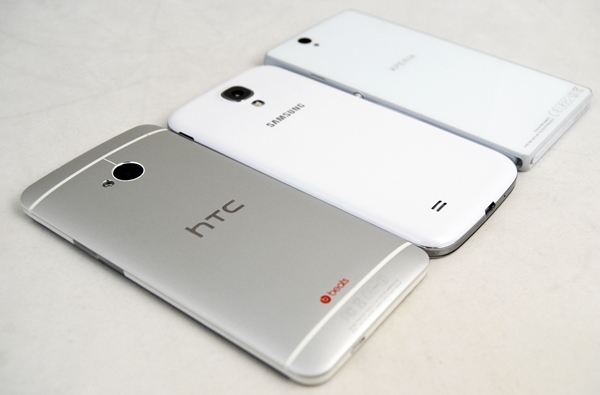 Samsung is perhaps one of the few major phone makers who continue to offer its flagship devices with removable batteries. Some may prefer the "zero-gap" construction of the HTC One, but there are also others who prefer the convenience of swapping out an empty battery with a fully charged one. So if you tend to fall in the group of relying on your mobile phone for a lot of calls and heavy mobile data usage, you would appreciate this extra leeway - as long as you purchase and charge a spare battery with the optional battery kit. Above user conveniences, this design also simplifies servicing of the device. So the choice of using a removable battery is a practical one for Samsung, service staff and its customers - all this while still maintaining an ultra thin profile. Samsung's engineering team deserves further credit here. 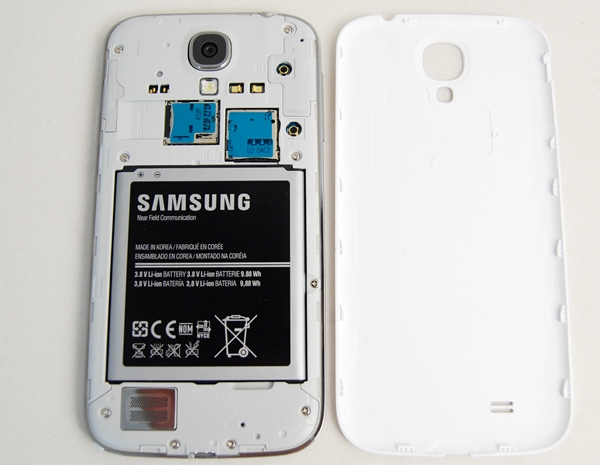 Samsung is the only Android vendor to ship a phone with Android 4.2.2 Jelly Bean out of the box. Traditionally, it is always the Nexus devices (LG Nexus 4, Google Nexus 7, Samsung Nexus 10) which get to run on the latest Android version. 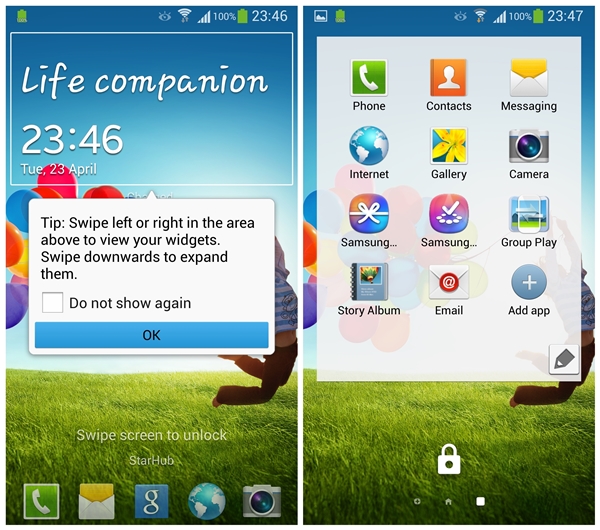 Android 4.2 Jelly Bean gives you the option to swipe right to access lock screen widgets and swipe left to access the camera. Samsung tweaks this on the Galaxy S4 to include a list of favorite apps when you swipe left by default. There is an option under Settings > My device > Lock screen > Lock screen widgets > Favorite apps or Camera to select the camera shortcut as default. You are free to add any app on your phone on the list. 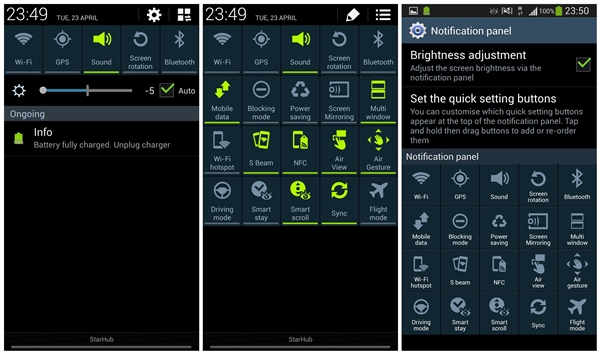 If you recall, Android 4.2 introduces Quick Settings where it is a shortcut to Settings, Wi-Fi, Cell Connection, Battery, Bluetooth and Wireless Display. As usual, Samsung has a row of toggles which you can swipe horizontally to access. There are a total of 20 toggles.

Unlike the stock Android interface, you can rearrange which toggle to appear first or what toggle to include. This can be done via Settings > My device > Display > Notification panel. From there, you can customize the toggles according to how often you use them. Press and hold on each toggle to arrange it.

Samsung is also probably the only vendor to integrate so many features into its customized user interface that even tech enthusiasts like us have difficulty remembering all of them. Here's a quick recap of some of the major software features:

We've previewed Air View, Air Gestures, Smart Scroll, Smart Pause and some of its camera software features in our videos, which you can check out below:

HTC One vs. Samsung Galaxy S4 vs Sony Xperia Z

To be honest, we found most of its gesture-based features to be gimmicky and they don't work all the time. For example, Smart Scroll requires you to look at the display for a few seconds for the front-facing camera to detect your presence before the feature is activated. During this time interval, wouldn't it be faster and more convenient if you just move your thumb or finger to scroll the web page?

Smart Alert (once enabled, the phone will vibrate when you pick it up to notify you of any new notifications) and Quick Glance may seem useful at first, but become redundant when you consider the fact that the flashing LED notification does the same job without you having to do anything. The same applies for using Air Gesture for playing music. Some wired earphones come with navigation buttons, so there is no need to whip your phone out of your pocket,  to play the next song.

However, to be fair, Air Gesture is useful in situations when your hands are occupied or dirty and you can't answer or reject a call without touching the phone. It allows you to answer or reject incoming calls by waving your hand across the device. It is not as useful however during driving as its answer/end call function can easily be replicated by any wired or Bluetooth headset with a dedicated button. Even Samsung's own bundled earphone come with a button to answer an incoming call.

The bottom line, however is, whether such software features are practical in the daily lives of consumers. The fact that it takes several attempts to get some of the features working properly doesn't bode well with us and that probably sums up our point of view.