For the Active User Who Demands the Best

The Galaxy S4 is Samsung’s best smartphone to date, and clearly, the Korean CE giant knows it. Deemed by many to be milking the brand for all it’s worth, it has since launched three variants of this original S4 (four, if you include the ‘Google Edition’), namely the Galaxy S4 Mini, Galaxy S4 Active, and Galaxy S4 Zoom. What we’ve here today is the Galaxy S4 Active (GT-I9295), which is arguably the closest in both form and function to the original S4. So, what’s changed, besides its new found dust and water-resistant properties? Before we delve deeper, here’s a quick look at its specs, and how it compares against the regular S4 and its nearest rugged competitor, the Sony Xperia Z:

Describing how the S4 Active looks like is simple. For the most part, it looks like the regular S4, sporting the same shape and the same 5-inch screen size (albeit with a slightly thicker bezel that has a brushed instead of dotted pattern). The sensors (less the temperature and humidity sensors), cameras, controls, and ports are also located in roughly the same places. The first major difference comes as we turn our gaze to the lower half of the screen. Instead of a physical, clickable home button flanked by two capacitive menu and back buttons, the S4 Active uses three physical buttons. There are a couple of good reasons for this. One, a normal tactile response gives better feedback than vibrations in more scenarios (underwater, in the pocket, when using gloves, for example); and two, this prevents accidental triggers when the capacitive buttons come into contact with water. For this reviewer, it also solves the problem of the flesh of his palm unintentionally activating the capacitive buttons when he stretches his thumb to reach the corners of the screen. To make feeling for and pressing of the buttons easier, these three buttons as well as the power button on the right and the volume rocker on the left also get a slight bumpy texture treatment. 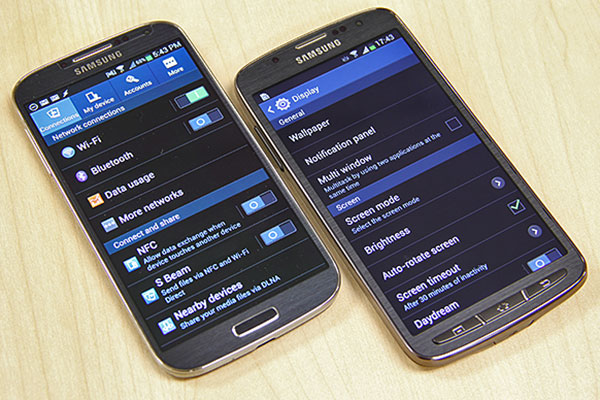 Technically, the S4 Active is slightly taller, wider, thicker, and heavier than the S4. Coupled with its less tapered and rounded corners, it actually feels more substantial in our hand than the S4. Along with its physical and texturized buttons, we will go as far as to say it is easier to handle than its 7.9mm sibling.

Flipping the phone on its back reveals more differences. While the S4’s detachable rear cover extends all the way from top to bottom, due to the two rubberized and textured sections at the top and bottom of the S4 Active’s back, its battery cover (still plastic, by the way) starts about 1cm from the top and ends about 1cm from the bottom. Thankfully, popping open the cover is still as simple: just put a fingernail under the tiny groove at the left and pull the cover off.

Under the battery cover, we’ve the usual microSD card (accepts up to 64GB), micro-SIM, and battery slots. Like the S4, the S4 Active uses a 2,600mAh battery which doubles up as the NFC antenna. One important thing that’s present here but not on the S4 is the rubber gasket on the other side of the battery cover. When closed, it surrounds the important internals, and prevents water from reaching them.

Also worth noting is that the micro-USB port at the bottom that’s used for data connection and charging now gains a cover to seal out the elements; and while the headphone jack isn’t plugged, we were told that it too is water resistant. The same goes for the two pin-sized microphones at the top and bottom of the phone. 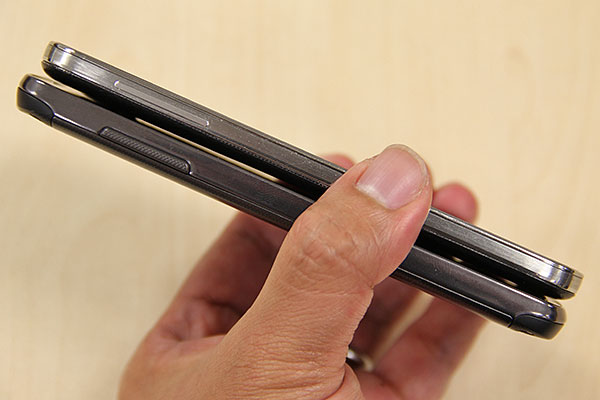 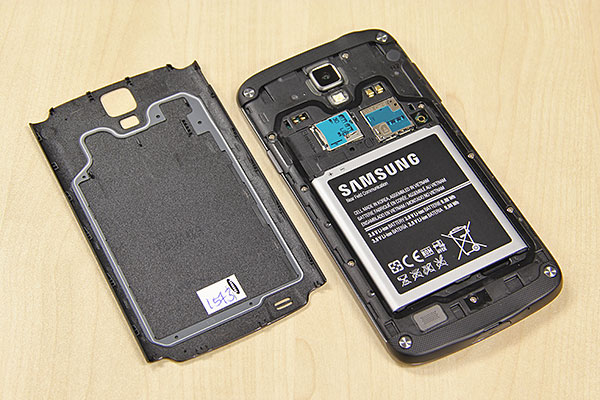 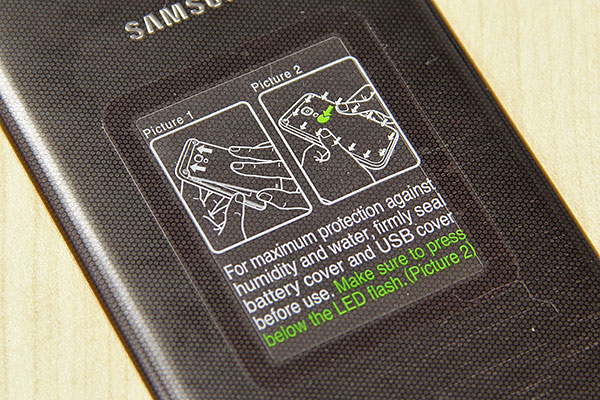 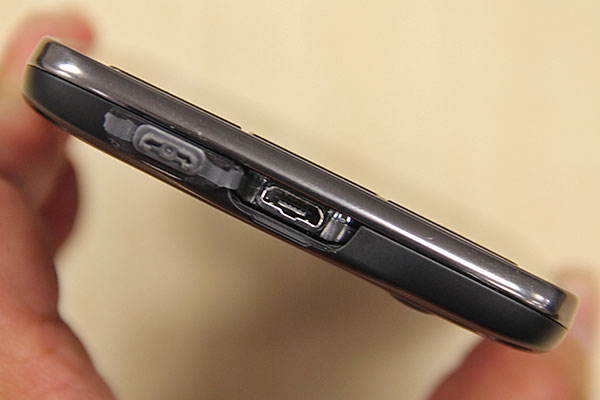 For those into the nitty-gritty, the S4 Active is IP67 certified, which means it’s totally protected against dust, and can be submerged in water as deep as 1m for as long as 30 minutes. The Sony Xperia Z on the other hand is rated at IP55 and IP57, which suggests that while it’s as water resistant as the S4 Active, it’s not as dust tight. All that said, neither phone is shockproof.

The S4 Active sports a Gorilla Glass 2-protected, 5-inch full HD touchscreen, but this is a TFT LCD panel rather than a Super AMOLED panel. The downsides are less dramatic colors, lower contrast, and blacks that aren’t as deep. But there are pluses too. In general, we found it to be both more color accurate and brighter (which translates to better legibility under direct sunlight), and exhibit less color shifts when you’re looking at it at an angle. And for those who care, under Settings > My Device > Display > Screen Mode, Samsung has removed the Professional Photo mode. 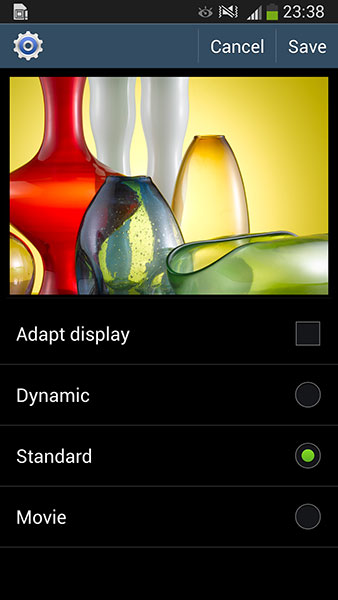 Like the regular S4, the Galaxy S4 Active runs Android 4.2.2, along with Samsung’s own TouchWiz user interface. Most of the software features - including a boatload of Samsung-branded ones like Group Play for instant content sharing between Samsung devices; S Translator for instant text or voice translation for emails and text messages; S Health for tracking your personal health statistics; Air View for previewing the content of an email, video clips, and messages by hovering the finger over the screen; and Air Gesture for changing the music track, scrolling up and down on a web page, or accepting a call with a hand gesture - on the regular S4 are present on the S4 Active too - so if you want to know more about them, we highly recommend that you check out the writeup and videos in our S4 review.

Expectedly, we found some features (like Smart Stay which keeps the screen turned on as long as you’re looking at it, the WatchON app and built-in IR blaster for controlling TVs and set-top boxes, and multi-window support) to be more useful than the others, so our recommendation to those who’re new to Samsung’s smartphones is to give all the features their fair share of time before deciding which to disable. (The pull-down notification panel holds more than 20 toggles, and is the perfect place to start.) Some built-in apps can also be disabled so that they won’t show up in the app drawer or run in the background. To do so, go to Settings > More > Application Manager > All, tap on an app and choose Disable.

Of course, some of the gripes we’ve with the S4 remained. For example, we still can’t have multiple lock screen widgets when using a secured lock screen. And a back button that’s on the right hand side defies common sense. But there’s one thing the S4 Active has done better than the S4, and that is out of the box, it has 11GB (out of 16GB) of user available storage. While this still doesn’t seem like a lot, it’s better than the 9GB S4 users are left with. Either case, you can free up internal memory by moving apps to the SD card.