The Galaxy S20 Ultra has two processor variants, comprising either the Snapdragon 865 or Samsung's Exynos 990 chip. Territories outside of North America, China, and Japan will get the Exynos 990, which includes Singapore.

This is Samsung's flagship SoC for 2020, and it is built on the 7nm EUV process. Like the mid-range Exynos 980 announced last year, it also adds 5G connectivity, courtesy of a new Exynos Modem 5123. The phone supports both mmWave, which typically gives the fastest speeds, and the sub-6 GHz spectrum. In comparison, the Galaxy S20 5G only supports sub-6 5G. mmWave is faster because it utilises higher and less crowded frequency bands where there's more bandwidth available, so a phone that only supports sub-6 5G might not have access to the full potential of 5G.

On the CPU front, the SoC employs a tri-cluster design in the following configuration:

Samsung has deployed its new Exynos M5 microarchitecture here, which is supposedly up to 20 per cent faster than the Exynos M4 in the 9820 SoC. These function as the "big" cores, and Samsung is mixing its custom CPU design with two "middle" Cortex-A76 cores and four "little" A55 cores.

Elsewhere, the GPU is getting a big upgrade too in the form of the Mali-G77 in an MP11 configuration. This GPU uses ARM's new Valhall architecture, and Samsung is claiming performance gains of up to 20 per cent and similar improvements to power efficiency.

Exynos 990 also transitions from LPDDR4X memory to LPDDR5, which the S20 Ultra has a whopping 12GB of. This is more memory than some laptops and desktop PCs have, making the S20 Ultra a truly extravagant offering. Samsung's LPDDR5 chips offer some compelling benefits over LPDDR4X as well, including up to 50 per cent more bandwidth and 20 per cent lower power consumption.

The Galaxy S20 Ultra was on par with most other Android phones here, coming slightly ahead of the Galaxy S10+ and Note10+. It lost out to the Pixel 4 XL and OnePlus 7 Pro however, and like the other Android devices, was way behind the new iPhones. 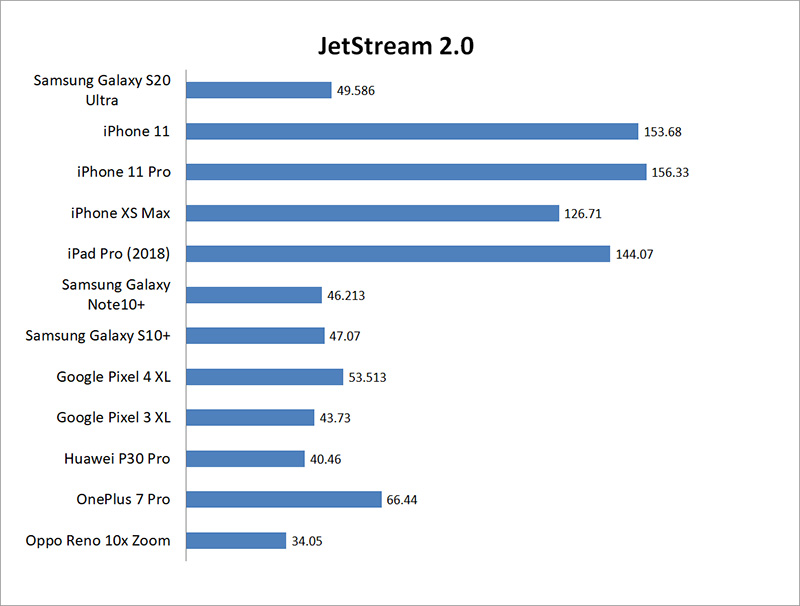 The S20 Ultra did well in AnTuTu, surprisingly beating even the iPhone 11 Pro. This amounts to quite a significant improvement over last year's Note10+ too, and it was around 33 per cent faster. 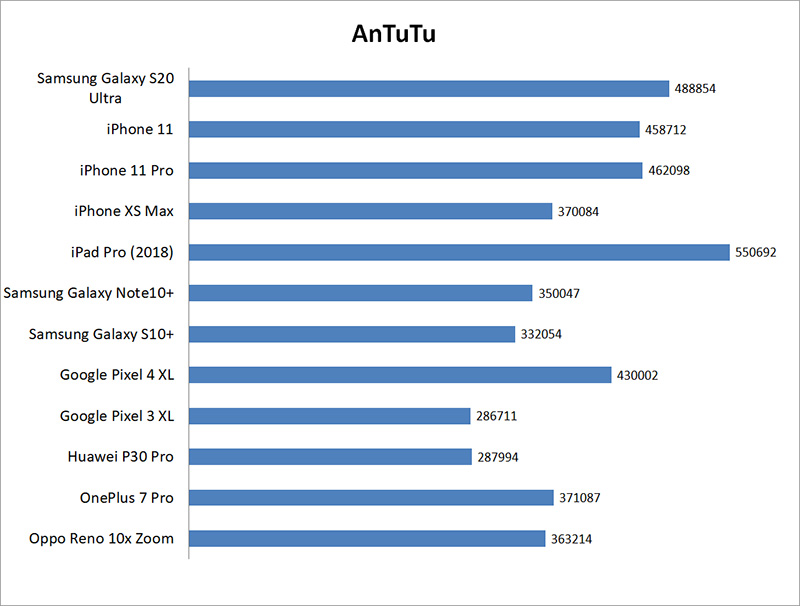 The Exynos 990 in the S20 Ultra outpaces the Exynos 9825 in the Note10+ by around 26 per cent in the multi-core benchmark. In the single-core test, it was roughly 5 per cent faster. It is still quite a distance behind Apple's A13 Bionic chip though, underscoring Apple's lead with its mobile processors. 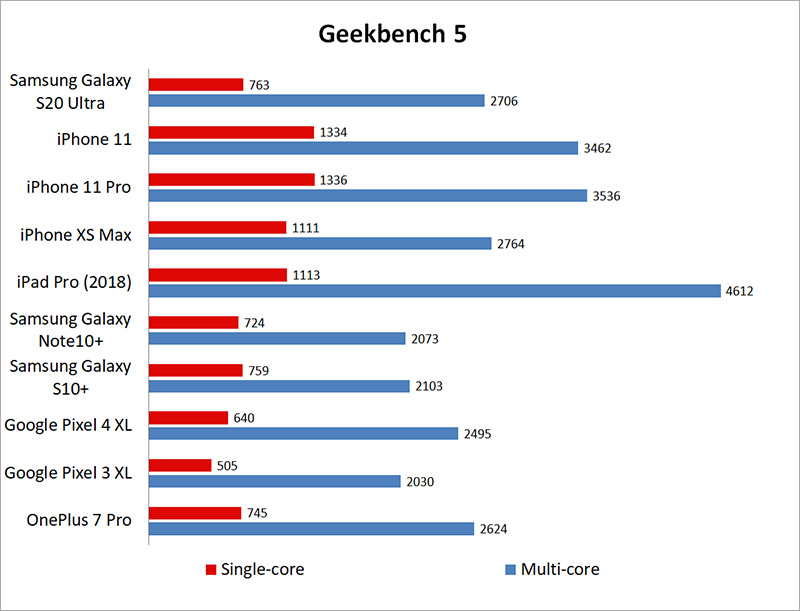 The S20 Ultra and its Mali-G77 GPU was around 32 per cent quicker than the Note10+, a decent improvement. The iPhone 11 Pro remains way ahead though, but this is otherwise a good showing for an Android phone. 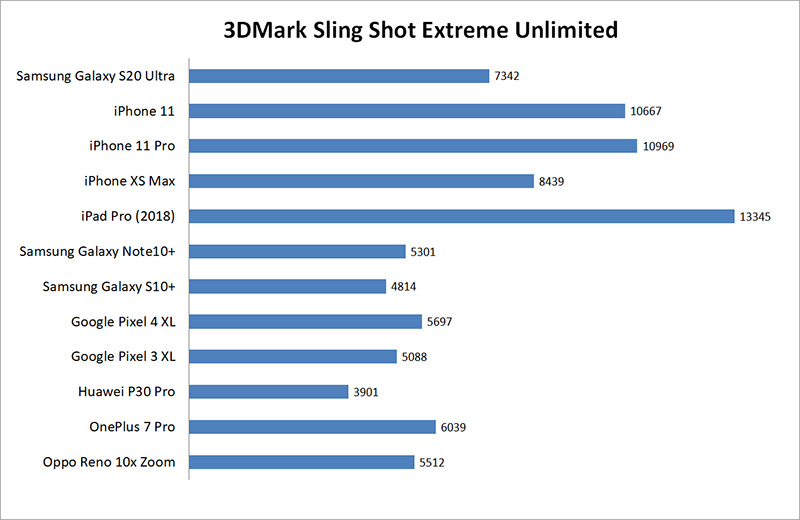 I tested the S20 Ultra at its full 3,400 x 1,440-pixel resolution, and battery life was still absolutely stellar. The beefy 5,000mAh battery kept it going for over 13 hours, and I don't think you'll have any trouble getting the phone to last you a full work day. It's the best performing phone so far, at least among the latest crop of phones we've reviewed.

The S20 Ultra ships with a 25W adapter, but it does also support an optional 45W charger that will juice it up even quicker. That said, the included charger is still plenty fast, and I got to around 63 per cent of charge in 30 minutes, and up to a 100 per cent in an hour flat. 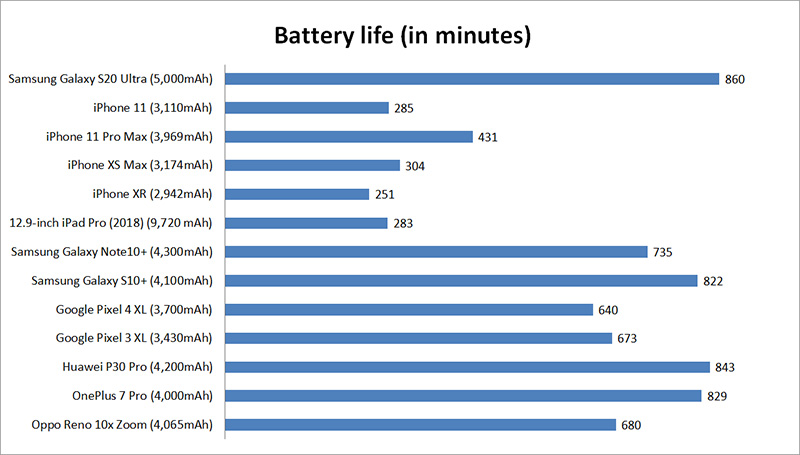