The lock screen design isn't exactly ground-breaking as HTC has had it since Sense 3.0, first seen on the HTC Flyer at MWC 2011 and Google has had it implemented in its Android 4.0 ICS update. Samsung has added a few tweaks to make it more unique than Android's stock implementation. First and foremost, there's the ripple effect/water trickling sound when you swipe your screen to unlock. You can disable this in the Settings > Security > Lock Screen options. 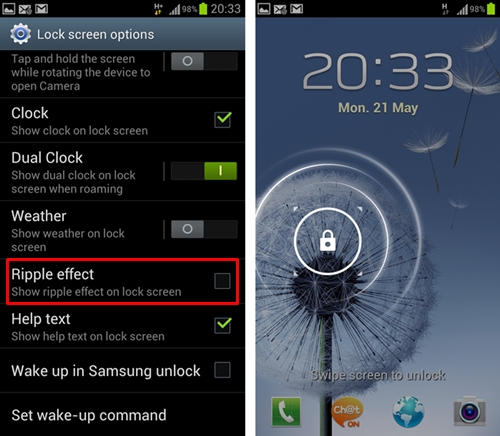 Secondly, you can customize the camera to fire up by tapping and holding the screen while rotating the device - just simply enable the Camera quick access function in the settings menu. We found this to be pretty fluid and responsive in our trials. At the end of the day, this will also free up one option for the four customizable shortcuts at the bottom of the screen. 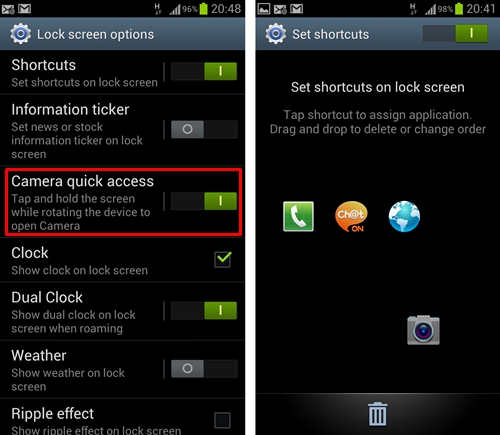 Interestingly, you can also set an information ticker at the bottom of the lockscreen that comes with a few options to customize your streamed content. The selection is less condensed than your typical Flipboard or RSS feeds but makes for a great way to keep yourself updated on current affairs. 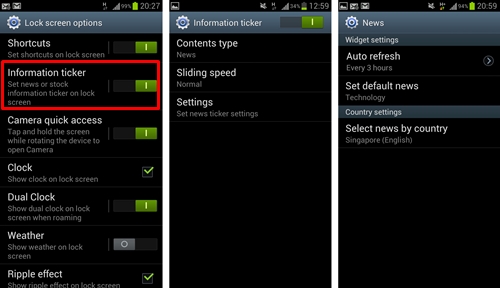 If you are worried about your privacy, it's best to enable the swipe screen lock with a pattern, PIN or password unlock. We highly recommend this because if you don't set any secure locking algorithm, clicking on the news item on the information ticker would immediately allow you to browse that news item and thus grant you access to the phone in full. If you had secured your phone, the act of clicking on a new item will prompt you to key in your unlock details first. 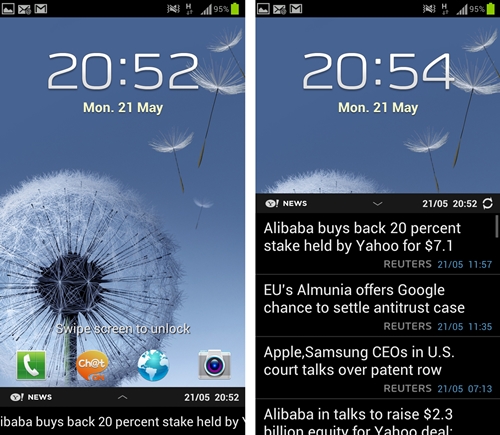 It is no exaggeration to say that the updated TouchWiz UI, along with the Android 4.04 OS, is a marked improvement from its iteration on the Galaxy S II. It is a breeze to use; access to settings is everywhere, from its notification bar to its home pages. We definitely felt that Samsung's choice to retain the Menu button on the Galaxy S III was a good move on its part, contributing a certain sense of fluidity to the overall navigation experience. That, plus the fact that it will be less of a hassle for smartphone users transiting from previous Android platforms. On the other hand, the Google Android 4.0 experience is inherent and not overly-cluttered by the TouchWiz interface. Overall, we were very impressed with the user interface and Samsung's advanced software additions. For those wondering how the S III's user interface fares against the HTC One X, we've a video comparison on the most commonly used functions:-

One quick observation to add is that Samsung has relegated the screenshot capture controls from pressing both volume down and power buttons on the Galaxy Nexus and HTC One X to clamping down on both home and power buttons on the Galaxy S III. This makes it a lot easier because we often find the volume control menu coming in the way of the former setup. Regardless, developers and smartphone reviewers will find this a relief.