The Samsung Galaxy S III comes with an in-house Exynos 4212 Quad quad-core processor clocked at 1.4GHz with 1GB of RAM. Along with the NVIDIA Tegra 3 quad-core HTC One X and the dual-core Samsung Galaxy Nexus, it forms part of the league of top-tier smartphone devices that are preloaded with Android 4.0. The other quad-core Android 4.0 smartphones that have been showcased at MWC 2012 but are not out yet are the LG Optimus 4X HD and the Huawei Ascend D Quad / D Quad XL.

As usual, we subject the review unit to the Quadrant benchmark, which can be found on Google Play. To gauge how it performs against the competition, we matched its scores against a range of devices such as the HTC One X, Samsung Galaxy Nexus and Samsung Galaxy S II. 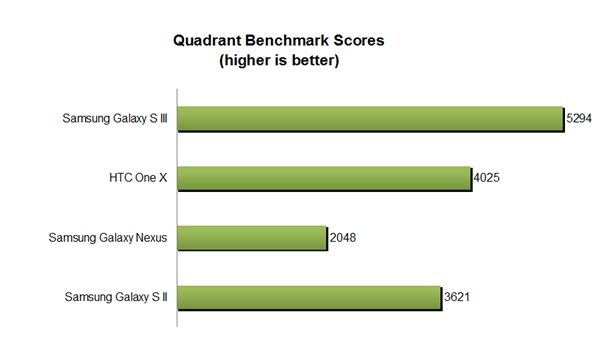 We were impressed with HTC One X's Tegra 3 quad-core processor, which propelled it ahead of its competition by a huge margin. The Galaxy S III's Exynos 4 Quad quad-core processor, however, blew its competitor's results out of the water by a huge lead. While this might not be surprising given that leaked benchmark scores pointed to a victory over devices with the Tegra 3 chips, we weren't expecting it to be this far ahead. Unsurprisingly, both dual-core Galaxy Nexus and Galaxy S II are left in the dust with the latter faring pretty well for its class. Then again, the Galaxy S II scored ahead of its dual-core competitors when it was first tested.

Benchmarking results aside, the Samsung Galaxy S III ran extremely smoothly and had absolutely no problems rendering pages or running graphic-intensive apps like Temple Run, thanks to its quad-core processor and 1GB RAM. The phone's lag-free performance, brisk day-to-day user experience and blazing fast web loading pretty much sealed the deal for us.

The Samsung Galaxy S III arms itself with an 8-megapixel camera with F2.6 lens and LED flash. Like the Galaxy Nexus, it features zero shutter lag and takes about 6 pictures per second. 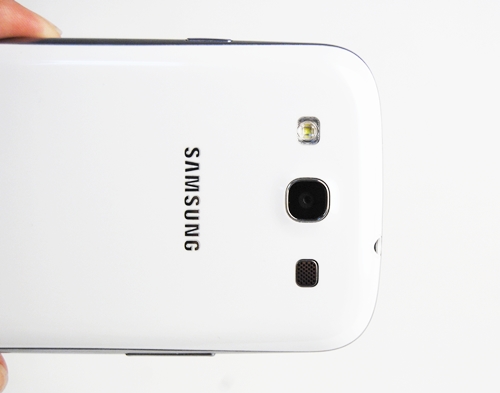 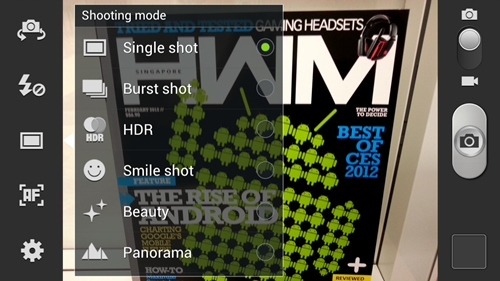 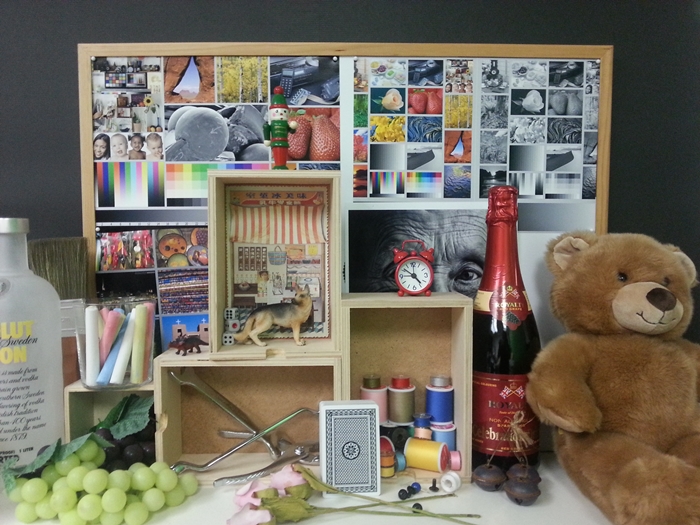 The 4.8-inch HD Super AMOLED screen (1280 x 720 pixels) is truly where the Samsung Galaxy S III shines. Not that it is unexpected of course; Samsung has always been at the forefront of mobile screen technology, first with its Super AMOLED displays on the Galaxy S I and S II and subsequently, HD Super AMOLED displays on the Galaxy Note and Galaxy Nexus. To add on, the AMOLED screens contribute positively to battery optimization with their higher level of power efficiency.

Text and images on the Galaxy S III are crisp and sharp, with images exhibiting optimal levels of saturation and deep blacks. While the Galaxy S III isn't as bright as the HTC One X, it presented excellent viewing angles under the sunlight. Like its predecessor, it comes with a selection of display modes to choose from. They include: Dynamic, Standard, Natural and Movie. It starts off automatically on the Standard mode, which did fine in our opinion but the choice is ultimately up to you. 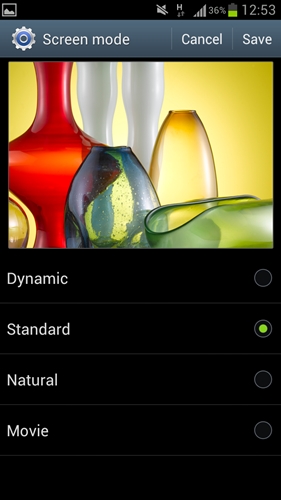 Using the same 480 x 800-pixel resolution video that we use across all our mobile device battery tests, we set the same test parameters which includes having the video looped under the following conditions: 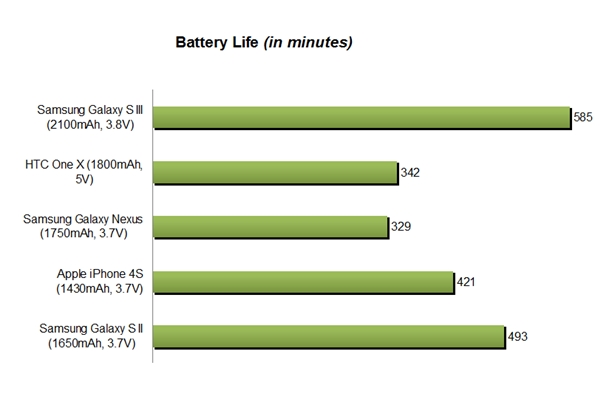 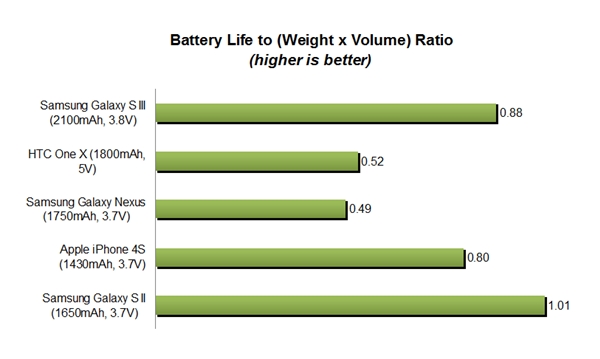 Like its Galaxy S predecessors, the Galaxy S III did extremely well in our battery tests, managing a record time of 9 hours and 45 minutes. Like the HTC One X, it leverages on its Exynos 4 Quad chip, which is said to consume 20% less power than the previous Exynos generation chips. This along with better core and screen management are probably the reasons why the Galaxy S III raked in pole position.

Of course, AMOLED displays are known to be more energy-optimized, which explains why it did so well using the latest iteration despite its huge 4.8-inch, 1280 x 720p screen. Like its predecessors, the Galaxy S III automatically conserves energy by disabling full brightness at about 20% to 15% of its remaining battery life. At 1%, the phone refuses to play any videos and we took this as the endpoint for our battery test.

Last but not least, without pointing the obvious, the device comes with a bigger 2100mAh battery capacity (the highest battery charge in this comparison) with HTC One X's 1800mAh trailing not far behind. The phones that came in second and third places, however, are the Samsung Galaxy S II and the iPhone 4S respectively, leaving both Android 4.0 devices, the HTC One X and the Galaxy Nexus, in the dust.

The Galaxy S III gains a respectable second place in the portability ratio index (battery life divided by [weight x volume]), losing out to its own predecessor, the Galaxy S II. Given that the Galaxy S II is the lightest of the lot at 116g, it naturally scored the highest.

Overall, the Galaxy S III did exceptionally well, lasting well beyond its fellow peers, even outlasting the previous champion, the Galaxy S II. And given the size differences, we dare say the Galaxy S III has also set a new record for device portability of its size. Apple's flagship product used to rank the highest in both battery life and portability index, but Samsung has clearly showed who's boss with their latest and greatest, beating the iPhone 4S rather thoroughly (again).