Amidst the fanfare at the Samsung Mobile Unpacked 2012 in London and much prolonged speculation, the Samsung Galaxy S III has finally made its way to our labs. Both its Galaxy S predecessors made headlines when they were launched, gathering many accolades (such as the S II that won in our Tech Awards 2012) for their performance, extended battery life, above-average imaging quality and AMOLED displays; as such, the Galaxy S III comes in with its shoulders heavy with expectations.

To cut the chase: Will the Galaxy S III keep these in its stride and emerge champion once again, in a sea of emerging quad-core Android devices? When we first heard of what the device had to offer software-wise, we were frankly quite bowled over by its long list of features, including S Voice, Direct Call, Best Photo & Burst Shot, Social Tag and so forth. It is necessary to understand that a smartphone isn't governed only by its hardware specs; much of the user experience is enhanced by its ecosystem and software additions (we will go into more details below) - one valid example would be Apple's iPhone devices. Needless to say, high-end hardware specs also lay the framework for smooth inner operations.

So all this talk bring us back to the same question: Will the Galaxy S III once again rule the roost of the Android world? At a glance, its spec sheet reads like an Android fan's wet dream, one that's almost identical to its closest rival, the HTC One X, which we will be comparing against closely: The near-retail set that we have at hand comes with 16GB of onboard storage (11.35GB user accessible to be exact) but is fortunately equipped with microSD card expandability that allows for a further 64GB of storage. Comparatively, the HTC One X comes with 32GB onboard storage with no microSD card option. As such, the Galaxy S III seems one step ahead of the HTC One X in the storage and expansion department.

The Galaxy S III also comes in 32GB and 64GB built-in storage configurations. However, there's no confirmation as to whether these variants will make an appearance locally. Samsung representatives have mentioned this information will be released closer to the launch date - which is thankfully, not too far away - so keep your eyes peeled for updates on HardwareZone.com.

If you need even more storage, the Galaxy S III will also come with a whopping 50GB of free Dropbox storage that will last for two years. This is twice of what HTC is offering in its One series. 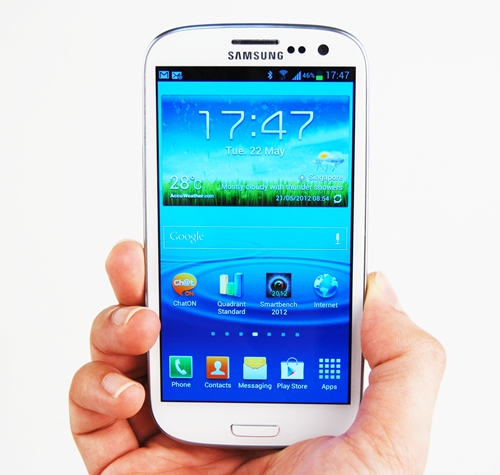 When we first handled the device in London, we were puzzled by Samsung's choice to move away from the Galaxy S series' signature design. Instead of the squarish form factor that was showcased on the Samsung Galaxy S I and Galaxy S II, the Galaxy S III takes on a more curvaceous shape quite like the Galaxy Nexus (or some might even say it resembles the iPhone 3GS). This certainly doesn't put a dent in its usability however - the rounded edges made it easier for users to handle and hold in their palms. At 8.6mm thin, the Galaxy S III compensates with a pencil-like waist and a lightweight body (133g) which makes its 4.8-inch screen a tad easier on the hands too. 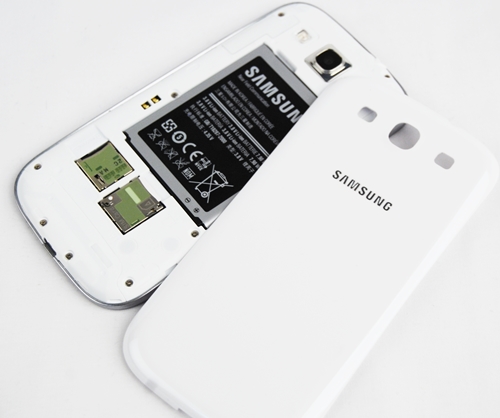 With the Galaxy S III completely encased in plastic, it certainly lacks the finesse that the similarly plastic polycarbonate-protected HTC One X has achieved. Throw in a questionable glossy finish and the phone screams "tacky" - well at least, that should have been the case. We can attest to the fact that the Galaxy S III doesn't look as bad as it sounds on paper or looks on your web browser screen (it's a classic case of "you have to see it to believe it"). There's a good reason for the glossiness and Samsung reassures you with their patented-Hyperglaze coating on the phone which is supposed to make the design of the phone look seamless and organic. In terms of practicality, it helps mask some of our fingerprints and keep a tight grip on the phone. To top it off, its 4.8-inch screen is protected by a layer of Gorilla Glass 2. 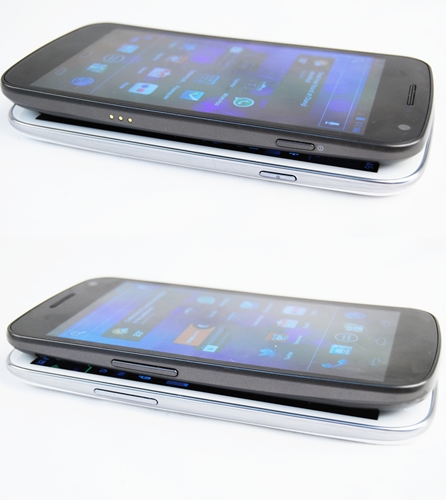 The similarities with its Galaxy Nexus cousin doesn't just stop at its well-rounded body; in fact, physical buttons are also almost identical in position and appearance. Thankfully, its thin buttons provide tactile feedback, making it extremely easy for us to unlock the phone's screen or adjust the volume. What it does retain from its predecessor is a lone home button and its two accompanying Menu and Back capacitive touch buttons instead of the virtual, on-screen Back, Home and Task switcher button format that the other Android 4.0 smartphones currently rely on. Not that we are complaining either, as this will probably be easier to adapt for those transiting from earlier Android smartphones. Otherwise, we were pretty impressed with the smartphone overall, with every part of the puzzle contributing to an overall positive handling experience.

As we mentioned earlier, tech specs are important but ultimately, the key to winning the consumers' hearts is to provide a user experience that is fluid and intuitive. This is why Samsung strives to provide an 'organic' experience that responds naturally to your needs and thankfully, there's plenty of exciting new software improvements on the S III. If you have been following us closely during our coverage on the Galaxy S III, you would have already visually sampled some of what the device can do, most of which are not natively available on other Android smartphones and some of which can be replicated by installing third-party apps off Google Play. Flipboard for Android, for instance, was initially exclusive on the Galaxy S III but became unofficially available within days when a XDA forum user Valcho who managed to get his hands on the Galaxy S III and extracted the .apk for all to download and install (we personally tried it on the Samsung Galaxy Note and HTC One X as well).

The open-source nature of the Android platform certainly has its pros and cons, which makes it even more exciting for manufacturers as they compete to innovate their products. In this sense, we say Samsung and its close competitor, HTC with its Sense UI, have emerged on top.

Do check out our short videos below for the list of software features on the Galaxy S III that were demo-ed before:-

While we can dismiss some of the software improvements as novelty features that will eventually lose its initial magic, this entirely boils down to your personal preference and usage patterns. We identified five top features that we personally found pretty useful based on a generic smartphone user profile with four basic needs: communications, web browsing, photography and social networking. So here they are:- 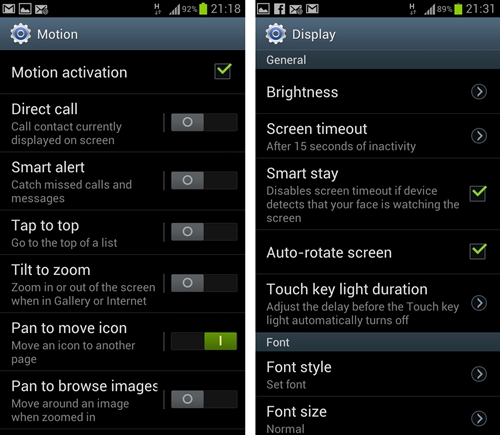 Another important aspect of the Galaxy S III experience is no doubt in its S Voice functionality. There are three ways to activate the feature: you can access it by double-pressing the Home button, clicking on the S Voice icon within the app drawer or by voice - default prompts include "Hi Galaxy" or "Hi Buddy"; otherwise, you can customize your own too. The voice prompts can also be used to unlock your screen (on Swipe mode and Face/Voice unlock only) if the option is enabled. You can assign voice prompts to check for missed calls, missed messages, open camera, check schedule, play music, play radio, record voice straight from the lockscreen itself. 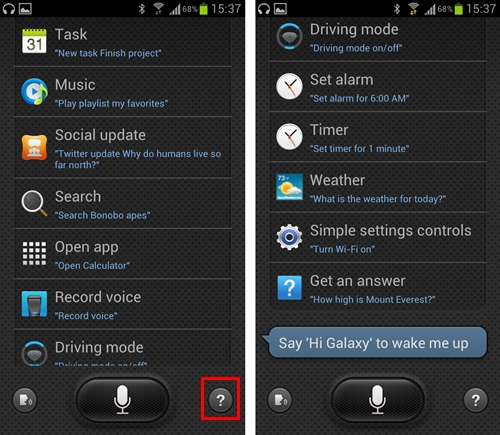 Our experience with the S Voice has not been particularly positive - while the S Voice delivers on basic requests and such, it still lacks the polish and interactivity that Siri possesses. Voice to text transcription seems pretty dismal with S Voice getting more wrongs than rights and we ended up with many "I don't know what is ____?" more often than we liked. This increases when when we posed silly questions to it. In comparison, Siri, at the very least, manages to come up with a few rather cheeky wisecracks. However, we have to give the S Voice credit for its myriad of language support (Germany, English, Spanish, French, Italian and Korean) which is slightly more diverse than Siri's current compatibility (English, French, German, Japanese).

Another thing to note is that while it is great that the Galaxy S III comes with a built-in voice assistant, there are plenty of free app options on the Android app store for current Android smartphone users to consider adopting. 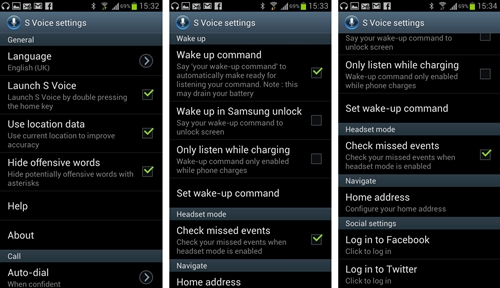 For an in-depth comparison between S Voice and Siri and Android-based Speaktoit Assistant app, check out our video demonstration below:-

Otherwise, head to the next page to learn more about the latest TouchWiz UI that will be framing the Android 4.0.4 experience on the Galaxy S III.