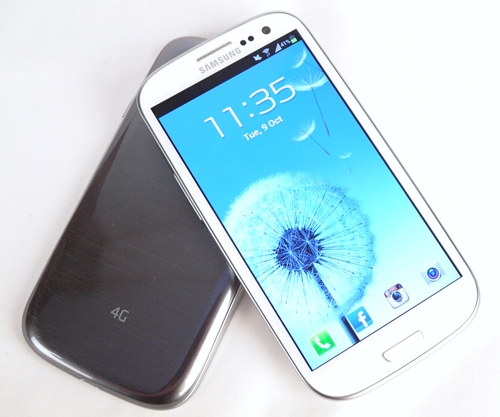 The Samsung Galaxy S III was a big hit when it first hit the shores of Singapore (and the rest of the world), and unarguably so for good reasons. The quad-core, Android 4.0 device is the company's flagship smartphone that possesses excellent processing performance, adequate camera features and glowing battery life. Samsung is all about providing different choices for the same product and this especially showed in their branding for the Galaxy S III. A few months after the Pebble Blue and Marble White variants were unveiled, both Amber Brown and Garnet Red shades began selling at telcos and Samsung retailers. Now, about four months after the Galaxy S III arrived on our island, we have another option: the Samsung Galaxy S III LTE variant, available in both Marble White and Titanium Grey.

Other than the obvious LTE support on both 1800MHz and 2600MHz frequency bands, the Galaxy S III LTE gets a RAM boost to 2GB and ships with the Android 4.1 OS, less than a month before the Galaxy S III gets its Jelly Bean update. Yes, we managed to get the international LTE version, not the dual-core version that was shipped to Canada, US and Japan. Otherwise, the LTE version is pretty much identical to its sibling, even sharing the same dimensions, weight, 8-megapixel camera, 2100mAh battery and Exynos quad-core processor. As such, we will be focusing primarily on the Android 4.1 experience on the S III LTE version as well as its battery performance. Of course, this will involve comparisons with other LTE handsets available in our market, including the latest iPhone 5, HTC One XL, the LG True Optimus HD LTE and the Galaxy S II LTE. But first, let's tabulate the differences between both Galaxy S III versions:-

The Samsung Galaxy S III LTE comes with Android 4.1, Jelly Bean. For a full list of what the OS entails, check out our thorough coverage here. On the Galaxy S III LTE, the TouchWiz (1) (2) experience gets a slight facelift with the Android 4.1 update and extra user features (detailed below). Due to the inclusion of "Project Butter", a processing framework introduced in Jelly Bean, the scrolling experience feels noticeably smoother, more responsive and faster. Touch responses and animations feel more accurate and slick as well.

On the whole, the Android/TouchWiz experience on the LTE version isn't very different from its S III sibling. Prominent features like S Voice, Burst Shot, Pop-up Play and more make reappearances on the Galaxy S III LTE handset. Do note that these updates will be heading to the Galaxy S III as well this month, so Galaxy S III users will be getting these features as well. 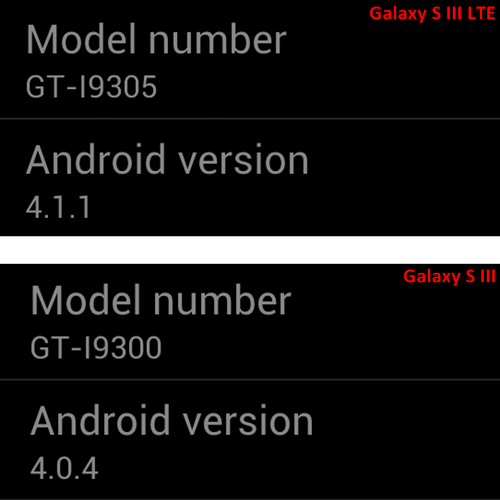 The notification bar gets a slight reshuffling in layout, with an additional bar dedicated to time and date. The settings icon has been pushed to the top as well, but otherwise, usability stays almost identical. The main difference here is in its notifications. On Jelly Bean, notifications are expandable, offering more contextual information, and actionable. Say, wanna share a screenshot you have just captured? You can do so out of the notification bar. Same goes to returning a call or messaging the caller. 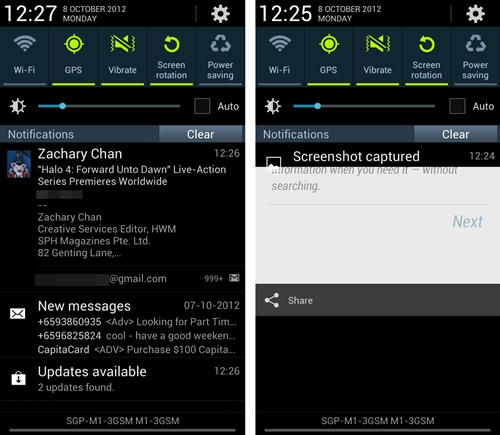 On the Galaxy S III, you don't get a one-click button to the multi-tasking launcher like you do on the Galaxy Nexus or the HTC One X due to its button configuration. Instead, you have to press and hold the home button to access that. Same on the Galaxy S III LTE with a small difference - the multi-tasking launcher gets beefed up in its Android 4.1 iteration. A big addition to the Multi-Tasking launcher is the inclusion of Google Now, a feature that uses personal data in your smartphone to retrieve helpful and informative data to help you in your day-to-day life. 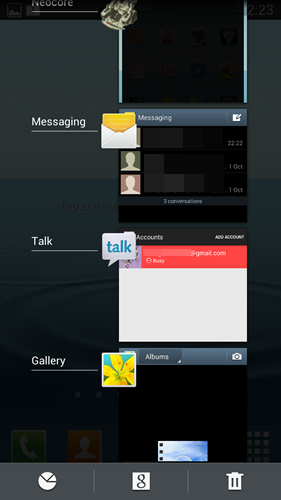 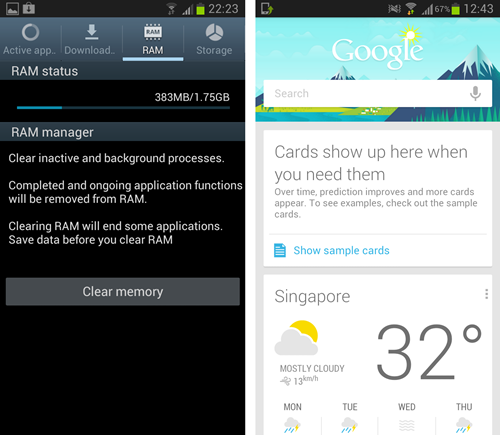 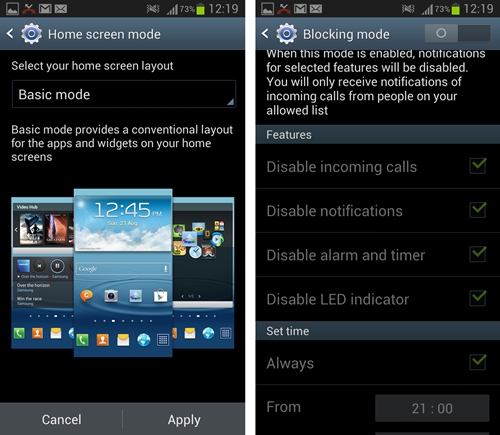 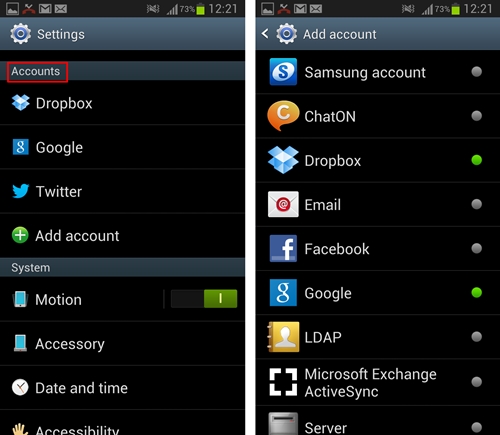 As usual, we subjected the review unit to the Quadrant benchmark, which can be found on Google Play. To gauge how it performed against the competition, we matched its scores against a range of devices such as the HTC One XL, Samsung Galaxy S III, LG Optimus True HD LTE and Samsung Galaxy S II LTE. For those who are unfamiliar with the Quadrant benchmark, it evaluates the CPU, memory, I/O, and 3D graphics of Android devices. 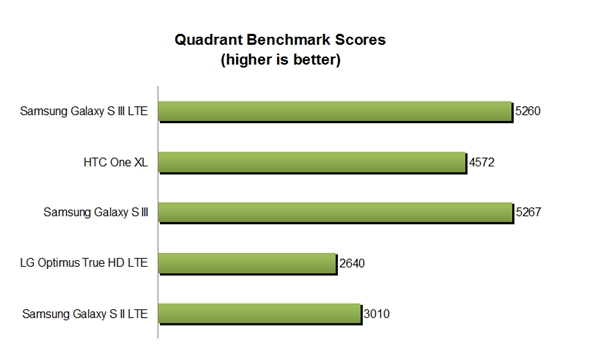 Unsurprisingly, the Galaxy S III LTE's Exynos 4 Quad quad-core processor did as well as its Galaxy S III counterpart since they were both fitted with the same processor. It is also good to note that the rest of the LTE devices here are outfitted with dual-core processors, including the HTC One XL. Due to the newer processor architecture design in its Snapdragon S4 chip, it scored a respectable 4572, not too far behind its quad-core peers. In comparison, its Tegra 3 chip-equipped sibling, the HTC One X, 'faltered' slightly at 4025, which goes to show that smartphone devices armed with quad-core processors don't necessarily produce the best results all the time.

Nonetheless, benchmark results are mere numbers. Putting them aside, the Samsung Galaxy S III LTE operated extremely smooth and had absolutely no problems rendering pages or running graphic-intensive apps like Temple Run, thanks to its speedy processor and 2GB RAM. Coupled with Android 4.1's Project Butter and 2-3 times faster mobile connectivity, the experience on the Galaxy S III LTE was, to say the least, extremely gratifying. On the whole, the phone's lag-free and responsive performance, brisk day-to-day user experience and blazing fast web loading got our stamp of approval. 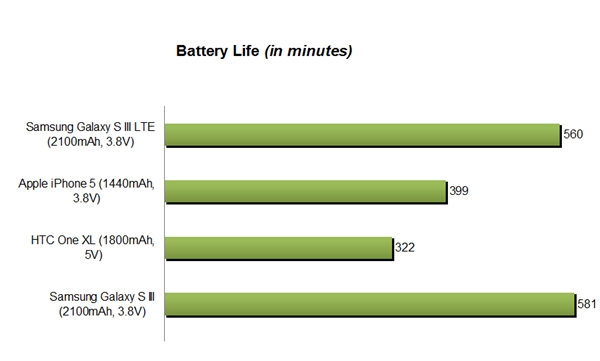 The Galaxy S III LTE managed a pretty impressive 560 minutes with Wi-Fi and differed from its sibling by just 21 minutes. We chalked it down to the Android 4.1 operating system requiring slightly more power to process than its Android 4.0 equipped counterpart.

Like its predecessors, the Galaxy S III LTE automatically conserves energy by disabling full brightness at about 20% to 15% of its remaining battery life. At 1%, the phone refuses to play any videos and we took this as the endpoint for our battery test.

Otherwise, it still rules the roost of top-tier devices for battery up-time. The Apple iPhone 5 comes in at third, with an acceptable run of 399 minutes given its much smaller battery pack and a non AMOLED screen.

For the 4G battery test, all the test parameters remain the same except substituting Wi-Fi with 4G connectivity. The handset mix is slightly more fleshed out now; on top of the LTE devices featured above, we will be comparing the Samsung Galaxy S III LTE with the LG Optimus True HD LTE, and Samsung Galaxy S II LTE. 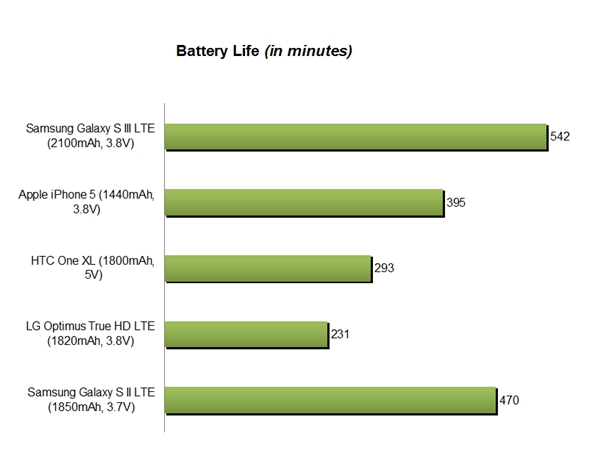 The Samsung Galaxy S III LTE outlasted the Galaxy S II LTE by slightly over an hour, coming in at first place with the longest at 9 hours and 2 minutes. Compared to the Galaxy S III however, it loses out by approximately 39 minutes. That's not too bad a trade-off for LTE connectivity. The iPhone 5 takes a respectable third place with 395 minutes, which differs very slightly from when it was running on Wi-Fi. Of course, we also have to take into consideration that the Galaxy S III LTE comes with the biggest battery capacity out of the lot. Plus, the power-efficient nature of AMOLED displays more than likely contributed to its above-average results. 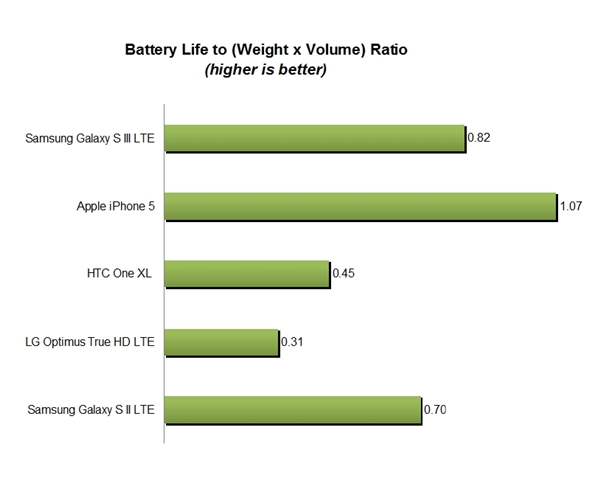 The Galaxy S III LTE gets a respectable second place in the portability ratio index (battery life divided by [weight x volume]), losing out only to the extremely thin and light iPhone 5. At 112g and coming in with the smallest dimensions and an acceptable battery life, the iPhone 5 naturally ranked highest. Otherwise, the Galaxy S III LTE didn't fare too badly itself, making it the overall winner in terms of portability and battery life for its size.

Overall, due to the close proximity of results between the Galaxy S III and the LTE edition, we found very little difference in terms of battery life. Under normal usage conditions, both devices could last us through the day with web-surfing, constant 3G/4G connectivity and some calls  - the Galaxy S III LTE lasted slightly shorter due to the more energy sapping LTE connection. Apart from that, for a moderate user, the device is good to last for an entire day with a daily charge at night. If you would like to extend its battery life, basic rules apply - you can switch on Auto-Brightness or turn off LTE when you don't need speedy connectivity.

As you can see, the Samsung Galaxy S III LTE and the Galaxy S III are alike in many ways. That is to say, if you already have the latter, there's little point in updating to the LTE variant. Plus, there's the Android 4.1 update heading in the Galaxy S III's way. However, if you were patient and found yourself still waiting and making a decision about an Android smartphone purchase, the Samsung Galaxy S III LTE ($998) is a solid choice - Android 4.1, 2GB of RAM, 8-megapixel camera, quad-core processor, anyone?. However, if you don't mind not having faster LTE connectivity, the HTC One X and Galaxy S III are your best bets as they are now more affordable than their LTE-equipped counterparts.

Otherwise, there isn't a lot in the market now that we would recommend over the Galaxy S III LTE, and even then, it really depends on what you are looking for exactly. Another solid contender would be the Android-flavored HTC One XL ($998) if you are a fan of the HTC Sense experience. If you are willing to wait till November, the HTC One X+ is a very plausible alternative, seeing that it comes with a beefier 2100mAh battery (whereas the One X and XL both come with smaller 1800mAh batteries) and is equipped with a more powerful NVIDIA Tegra 3 quad-core processor clocked at an increased speed of 1.7GHz. There's no news yet on whether its LTE variant will make its way to our shores, but we reckon we should know by November.

Of course, there's the recently launched iPhone 5 [S$948 (16GB), S$1088 (32GB) and S$1,238 (64GB)] for those looking to update to an LTE-ready iOS device. If the Samsung Galaxy S III LTE's 4.8-inch screen isn't sufficient for you, there's always the 5.5-inch Galaxy Note II to consider. The LTE version of the Galaxy Note II will be launching in Singapore this month so you have at least a few weeks more before you make a decision between the larger Galaxy Note II LTE and the Galaxy S III LTE devices.