Not only does Samsung want the Galaxy Note to dominate in terms of physical size, the company also has plans for it to be the leader among the dual-core Android smartphones. It packs the same Exynos processor and 1GB of RAM as the Galaxy S II, with the clock speed slightly higher at 1.4GHz. We believe that you're as eager as us to find out how the Galaxy Note would fare in the performance benchmarks and of course, against its competitors.

Even though the HTC Sensation XL is powered by a single-core processor, we've shortlisted it as it's the only phone that can come close to the Galaxy Note in terms of screen size. We're certain that It would be of interest to consumers who are considering between the two devices. The Samsung Galaxy S II is thrown in to determine if the slight difference in clock speed will have any impact on the performance. Lastly, the Motorola Razr is included as well.

We have adopted two specific benchmarks, both of which are downloadable via the Android Market. The benchmarks are conducted on these devices from a fresh reboot on their respective stock firmwares. 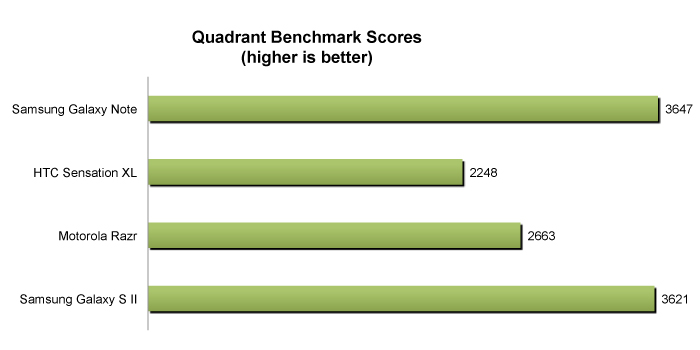 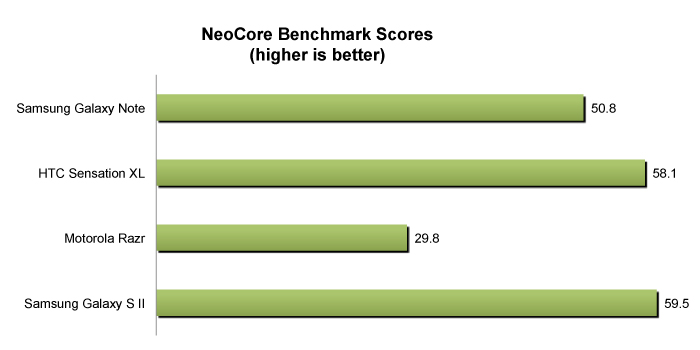 During our day-to-day usage of the Samsung Galaxy Note, we found the user experience to be a very pleasant experience. Page scrolling was a breeze and the user interface was smooth and fluid in its operation. Apps loaded quickly and multitasking was effortless.