The Samsung Galaxy Note II is the most powerful device in the company's portfolio as it is powered by the Exynos 4412 Quad quad-core 1.6GHz processor and 2GB RAM. In comparison, the Galaxy Note 10.1 runs on a similar chipset of a slightly lower clock speed (1.4GHz).

As usual, we'll be comparing the performance of the Galaxy Note II against its predecessor (Galaxy Note), the Galaxy S III LTE, Apple iPhone 5 and HTC One XL. We will use the Quadrant benchmark to evaluate the CPU, memory, I/O and 3D graphics of the Android devices.

As expected from our review of the Samsung Galaxy S III LTE, the Quadrant benchmark score of the Galaxy Note II didn't catch us by surprise. It ran circles around the competition, including its predecessor, and is currently sitting on top of the charts with an impressive score of 6080.

Its higher score is attributed to its slightly faster clock speed of 1.6GHz since both devices are powered by Android 4.1 Jelly Bean and 2GB RAM. The HTC One XL, powered by a Qualcomm Snapdragon S4 dual-core chipset, fell behind by a significant margin although it is expected to perform better once it is upgraded to Jelly Bean.

As for the LG Optimus Vu, its marginally better score over the One XL speaks a lot on the capability of its NVIDIA Tegra 3 quad-core processor - it is outclassed by the Samsung Exynos 4412 Quad (at least from the theoretical point of comparison).

Number crunching aside, the Galaxy Note II feels extremely fluid in its operation. We certainly did not encounter any hint of slowdown when opening apps or multitasking via the Multiple Windows feature. The software optimization of Jelly Bean, quad-core processor and 2GB RAM no doubt ensured that the daily user experience was top-notch and almost on-par with that of a Nexus device.

When the Galaxy Note was unveiled in late 2011, it had the biggest display ever on a smartphone. It retained the title for about a year until now when the Galaxy Note II came and trumped it with a larger 5.5-inch display. On paper, the 0.2-inch increase in screen size may seem negligible but in reality, the difference is quite noticeable.

As expected of AMOLED displays, the viewing angles are great and colors are rich, albeit over-saturated. Compared to its predecessor, the Galaxy Note II's display seems brighter and colors are richer. The magnificence of the 5.5 HD Super AMOLED display is exhibited best when watching videos and playing games, where the blacks are exceptionally deep and present great color contrast.

You won't run out of storage space considering that the Galaxy Note II comes with 16GB built-in storage. While this should suffice mainstream consumers, Samsung also throws in a microSD card slot that supports up to 64GB sized cards, bringing the storage capacity to a maximum of 80GB. Moreover, the 50GB free Dropbox storage (inclusive of 2GB) when you sign up for a free account should come in handy to backup your documents and photos on the 'cloud'.

The S Pen feels more solid than the one in the Galaxy Note, and its handwriting recognition has improved drastically. We were able to write out a message decently although the software had difficulties interpreting cursive handwriting style. In addition, the S Pen is also more responsive due to Wacom’s Electro-Magnetic Resonance (EMR) technology. We tried using the S Pen of the Galaxy Note on the Galaxy Note II and it worked albeit we found it less smooth and accurate.

Similar to the Galaxy S III, the Galaxy Note II sports an 8-megapixel rear camera which can capture images of up to 3264 x 2448 pixels and 1080p videos. It also has a front-facing 1.9-megapixel camera for video calls and taking self portraits.

Editor's note: The battery performance results seen in this section are updated as of 31st October 2012, based on the final review unit of the Samsung Galaxy Note II LTE. Overall, the battery performance improved, with the review unit of the Galaxy Note II lasting 30 minutes longer than the earlier preview edition. Therefore, the Galaxy Note registered a better power consumption figure (0.89W vs 0.93W) and Portability Index improved (0.62 vs 0.59). Even so, this doesn't change the overall outcome against the competition. 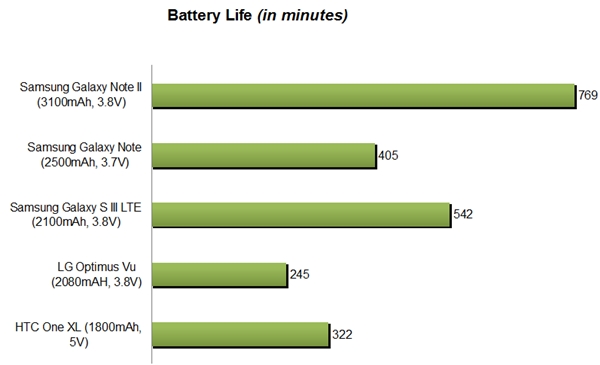 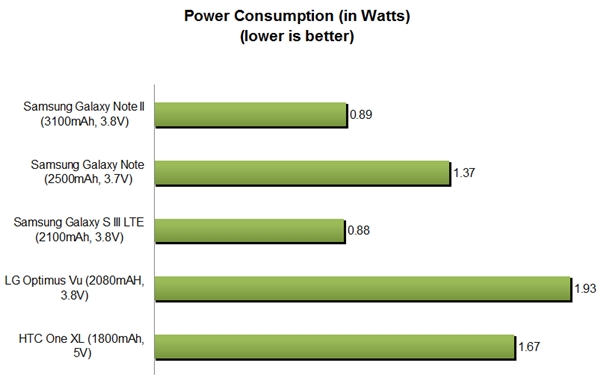 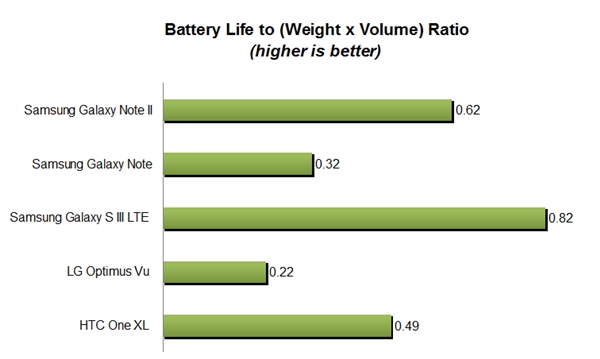 Having proven its prowess in the Quadrant benchmark, the Exynos 4 Quad processor went on to display its power efficiency in our standard battery test. Lasting a whopping 12 hours and 49 minutes, the Galaxy Note II ranks top among the phones compared.

Under normal usage conditions such as web surfing, uploading several images and messaging (though on an intensive side of things), the Galaxy Note II managed to last more than a day without difficulty. A minor but common issue we encountered with the Galaxy Note II is that its screen tends to warm up after extended periods of intensive usage. Although the heat felt wasn't as intense as that of the HTC One X, it got warm enough to catch our attention.

Want to know our  verdict on the Samsung Galaxy Note II? Well, it can be summed up in one sentence: it is nothing short of spectacular.

The Samsung Galaxy Note II is not only a phone that does it all, it does it almost to perfection. Take its 5.5-inch HD Super AMOLED display for example. It delivers an exceptional level of multimedia experience that is unrivalled anywhere else, while a combination of efficient power management and large battery capacity ensures that it attends to your every need throughout a busy day. In terms of software innovations, Samsung continues to outdo itself with the introduction of Smart Stay, Multiple Windows, Popup Play and the S Pen.

Some may question the usability of such a device due to its massive dimensions but we think it's no longer a point of contention as the large turn outs at the launch events of the three telcos further reinforce our point. Increasingly, consumers are embracing smartphones with larger screen sizes and Samsung is well-positioned to meet that demand. That doesn't mean big screens are for everyone, but many are appreciating the immersive experience and the added flexibility a larger phone allows.

At S$998, the Samsung Galaxy Note II is highly recommended if you are looking for the best Android smartphone in the market right now. However, if the size bothers you, the Samsung Galaxy S III LTE is the next best choice since it has almost everything the Galaxy Note II has except for a few software features and obviously, the massive screen size.