Like most recent Android smartphones, the Note 4 ships with Android 4.4.4 KitKat. Samsung also preloads its latest version of TouchWiz on the Note 4, which looks aesthetically more pleasing and feels smoother than past versions. The same interface can also be found on recent Samsung phones such as the Galaxy Alpha and Galaxy S5. Here are some screenshots comparing the differences of TouchWiz between the Note 4 and Note 3:

Since the S Pen is the main feature setting the Galaxy Note series apart from the competition, Samsung made it a necessity to enhance the functionality of its stylus pen with each iteration. As a quick recap, the Note 3 introduced Air Command, which allowed you to quickly execute five S Pen-related features (Action Memo, Scrap Booker, Screen Write, S-Finder, and Pen Window). For more information on Air Command, do check out the software section of our review on the Note 3.

On the Note 4, the Air Command feature is still present although it has been reduced to four features - Action Memo, Smart Select, Image Clip and Screen Write. A new feature offered is Smart Select, which lets you crop or choose a particular segment/section from different sources such as a website, a photo and a text message, and share the content easily. Below is a short video showing how Smart Select works:

Depending on the content that you selected, you are offered a variety of links to apps and other functions via Meta text. For example, if you select a paragraph of text from an article to share, the Note 4 will offer Smart Suggestion such as the URL link and browser bookmark. If you are reading up on a particular hotel to book for your holiday trip, Smart Suggestion can extract the relevant information such as the address and location details to be shared. 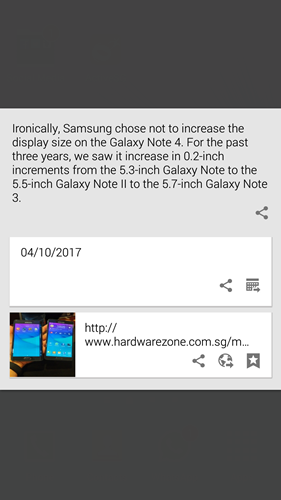 The S Pen also has another new feature which allows you to drag and select multiple files on the Note 4 in selected applications such as Gallery, My Files, Browser, S Note and S Planner. We found this feature quite useful especially when sharing multiple photos with friends. The ability to select a group of photos in the Gallery in one step saves time and effort compared to manually selecting with your finger. Below is a video showing this feature in action:

Multi window (also known as split window view) has been a standard feature on the Galaxy Note series since the Note II and Samsung has since redesigned it to be accessed much faster and easier. Previously, you needed to long press the Back button to activate a side bar where you can choose two apps from a list to run simultaneously. This method is still present on the Note 4, but you can now activate it by simply tapping on the Recent Apps button. Apps that support multi window will have the split view icon on the top right corner of the panel. 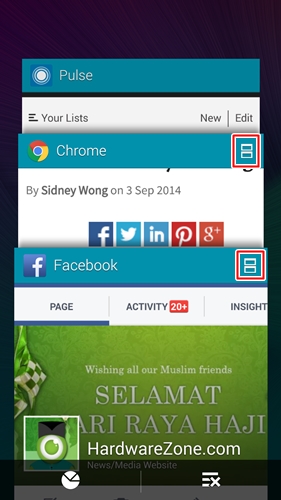 We find the new method to be much faster and more convenient in daily usage although we do hope that more third party apps can be supported. As seen in the screenshot above, Pulse News Reader does not support multi-window. Unexpectedly, the official Twitter app is not supported as well. Do also note that multi window has to be enabled in Settings > Multi Window.

Samsung also made it easier for you to activate pop up window on the Note 4. This can be done by using the S Pen or your finger and swiping down from the top left or right corner of the screen. Compared to the method used on the Note 3 where you need to use the S Pen to draw a small window anywhere on the screen to open an app in a small window, the new method is also faster. In addition, you can adjust the size of the pop up window, minimize it into an icon or revert it to full screen view.

Side key panel for one-handed usage

The major concern when handling large display sizes have always been its awkwardness, especially if you're trying to use it with one hand. Most Apple users got their first taste of this phenomenon with the iPhone 6 Plus. To Samsung's credit, as a major proponent of phablet devices, the company has consistently worked on usability by refining interface and offering software workarounds through each generation of Note devices.

First introduced on the Galaxy Note II, users can already enable a special one-handed input mode (keypad, keyboard, calculator and unlock pattern). On the Galaxy Note 3, Samsung brought this to the next level by allowing users to adjust the scale and position of all screens by swiping the edge of the screen. Just when you thought Samsung had called it a day on this usability aspect, the Note 4 introduces the most practical one-handed solution yet - the side key panel.

By enabling the side key panel, you can have access to major navigation keys (Home, Back, Menu, Recent Apps), App List and Reduce Screen on the side for quick thumb access. Furthermore, the side key panel can be moved to the left or right side of the screen to suit the needs of different users.

Of all the one-handed operation solutions we've seen so far, Samsung's side key panel is the most innovative and practical of the lot. While we initially kept reaching back to the hardware buttons for navigation, the side key panel gradually grew on us and we appreciated its functionality. It will not solve all the one-handed usage issues faced by phablet users, but it certainly made it easier to execute common actions on the Note 4 than competing devices.

Action Memo as a widget

For readers who are unfamiliar with Action Memo, it is actually a note-taking overlay which you can activate on any window or app. Not only can you take down notes and information quickly, you also can have access to 7 tasks - phone, contacts, messaging, @ (email), browser and to-do icons. On the Note 3, the Action Memo is saved as a stick-it note in the app. Now, you can pin the individual notes as widgets on the home screen.

Even with the new enhanced S Pen and its software features, there are bound to be situations where you cannot simply jot down everything you see all the time. This is why the Note 4 now has Photo Note, a photo-taking feature that you can use to take a photo of the notes (with text and images) and convert them into digital content on the S Note to be edited. 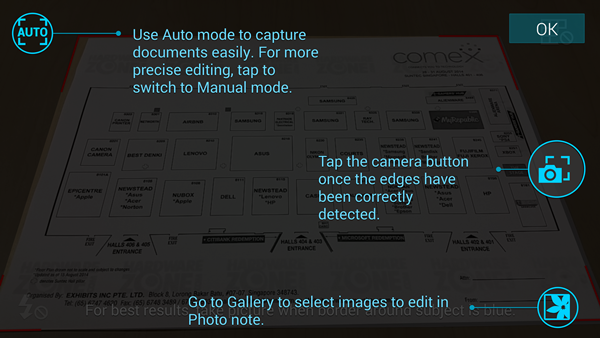 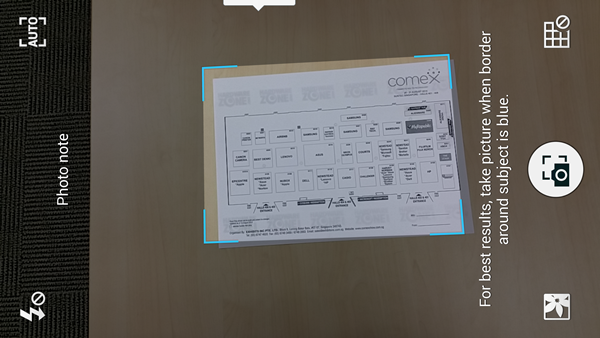 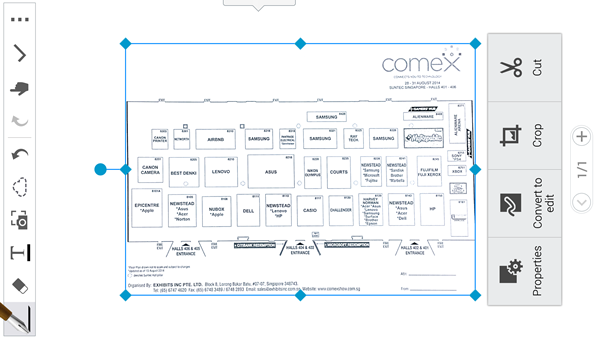 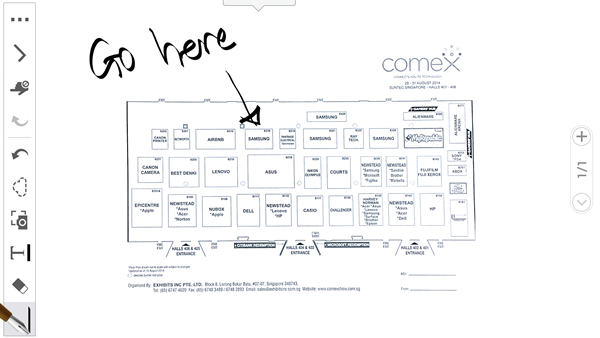 Overall, we find the experience of using Photo Note to be decent. While it does take some time for the Note 4 to process and convert an image into digital content for editing, Photo Note should be a handy feature for business professionals and students who need to capture meeting notes or lecture slides without having to write anything down.

Similar to the Galaxy Tab Pro and Tab S tablets, the Note 4 comes with a free suite of apps that is said to be worth more than S$700. Dubbed Galaxy Gift, Note 4 users can download a range of paid apps for free from the following categories: productivity, entertainment, education, e-books, and lifestyle and others.