The Galaxy Note 3 that Singapore is getting is equipped with the latest Qualcomm Snapdragon 800 quad-core 2.3GHz processor with 3GB RAM, and is capable of LTE. There's also a 3G version that's powered by an Exynos 5 Octa processor (quad-core 1.9GHz + quad-core 1.3GHz), but we won't be testing this version.

We will be pitting the Galaxy Note 3 up against other 5.5-inch and above rivals such as the LG Optimus G Pro, Huawei Ascend Mate and Sony Xperia Z Ultra.

Quadrant evaluates a device's CPU, memory, I/O and 3D graphics performance. As expected of a Samsung flagship device, the Galaxy Note 3 thrashed the competition in the Quadrant benchmark with the highest score of 22,348. As points of reference, the Snapdragon 800-powered LG G2 and Sony Xperia Z1 scored 19,372 and 20,474 respectively. The Xperia Z Ultra only managed a mere 16,148. Both the Snapdragon 800-powered Galaxy Note 3 and Xperia Z Ultra take the lead in the 3DMark Ice Storm Unlimited chart, with the latter edging just ahead by a small margin.

The Galaxy Note 3 had the best performance of all Android devices to date in the SunSpider JavaScript benchmark with a score of 585ms. The G2, Z1 and Z Ultra scored 1138.1, 780.9, and 766.8ms respectively. However, the Galaxy Note 3 stops short of toppling Apple's iPhone 5S, which currently tops the chart at 414.8ms!

Synthetic benchmarks aside, the Galaxy Note 3 performed as expected during day-to-day usage. Being powered by the latest Qualcomm Snapdragon 800 processor doesn't mean that the user experience is better; during the past three days of using the Galaxy Note 3, the phone operated smoothly with no lags or hiccups. Web browsing is fluid and pinch to zoom is effortless.

Like the Galaxy S4 and most Android flagship devices, the Galaxy Note 3 is equipped with a 13-megapixel rear BSI sensor. New features such as Smart Stabilization and LED flash (High CRI) are added onto the Galaxy Note 3 for better image quality with true-to-life colors.

However, the Galaxy Note 3 lacks built-in optical image stabilization (OIS), a feature that is present in the LG G2, Nokia Lumia 1020 and HTC One. To (sorta of) make up for the absence of OIS, the Snapdragon version of the Galaxy Note 3 is among the first phones to be able to capture 4K videos.

As 4K videos are captured at higher resolution, they are going to take up a lot of storage space. We took two 10-second video clips using 4K and 1080p, and realized that the former takes up 61.6MB of storage space while the latter only takes up 21.3MB.

In addition, the Galaxy Note 3 limits 4K video recording to a maximum of 5 minutes per clip. For now, we feel that 4K video recording is just part of a marketing gimmick as you can't view 4K videos in their original resolution on the device, or on any other screens you have at the moment. But hey, we certainly don't mind that it can record in 4K, that's for sure. 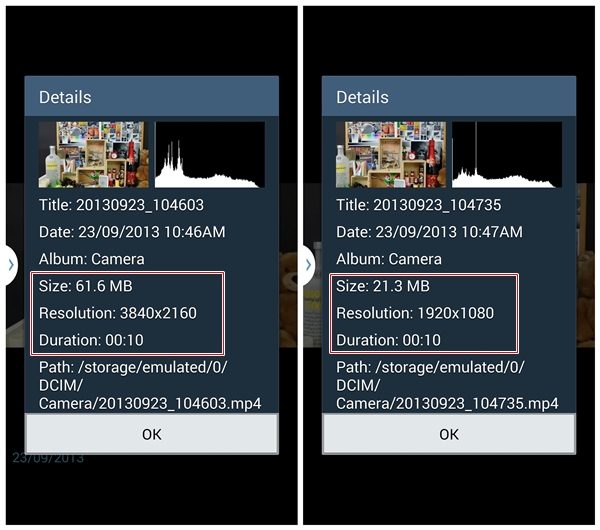 Its excellent battery mileage can be attributed to the power-efficient Super AMOLED display and a slightly larger battery (compared to the Note II). To be honest, we were caught off-guard by the better-than-expected results of the Galaxy Note 3. It seems that the Galaxy Note 3 is the first device to buck the trend of Full-HD devices registering lower battery mileage than its HD counterparts.

In the Portability Index where each device is assessed on its ability to balance battery mileage with its size and portability, it is almost certain that Galaxy Note 3 emerged top due to its excellent battery mileage, thinner and lighter form factor.

To give you a more realistic understanding on how the Galaxy Note 3 fared under real world usage conditions, we included screenshots of the usage and history graphs which are available on Android 4.0 and later devices.

As seen from the graph above, the Galaxy Note 3 could last about 27 hours. 5 hours screen-on time (in our use case) isn't a problem. Some notes:

Our typical usage scenarios include making some voice calls, texting via WhatsApp, taking some photos and sharing them on social networking sites (Facebook and Instagram), the occasional web browsing via Pulse News Reader and emailing. Do note that battery mileage varies depending on usage patterns.

Despite coming into the market space brimming with rival offerings, there is beyond a shadow of doubt that the Galaxy Note 3 will outsell the other phablets.

Having created the product category in 2011, Samsung has the time and experience to develop and refine its software and hardware while none of its competitors has. The S Pen, once thought to be just another conventional stylus, has become the differentiating feature of the Galaxy Note 3. The competition has yet to offer a compelling alternative to the S Pen, although Sony comes close with its Xperia Z Ultra which can work with any stylus, pen or pencil.

As gimmicky as the S Pen-related software may seem, Air Command does have practical applications in everyday life, especially for creative professionals, students and consumers who are into digital drawings or want to do more on their mobile devices. We feel that Air Command has more practical value compared to the its other features such as Air Gesture and Air Glance, which do not work all the time. More importantly, out of the gate, it doesn't lag (if at all) as much as the Galaxy S4 did when it first launched.

The design and appearance of the Galaxy Note 3 may have remain largely unchanged, but Samsung took the effort to make its offering more ergonomic by slimming the Galaxy Note 3 and offering a different take on the one-handed operation.

Overall, the Galaxy Note 3 feels more complete as a phablet compared to its rivals. If you do not need the S Pen or any of its productivity features, there are some really good alternatives in the market such as the LG Optimus G Pro, Sony Xperia Z Ultra, or even Samsung's own Galaxy Mega. 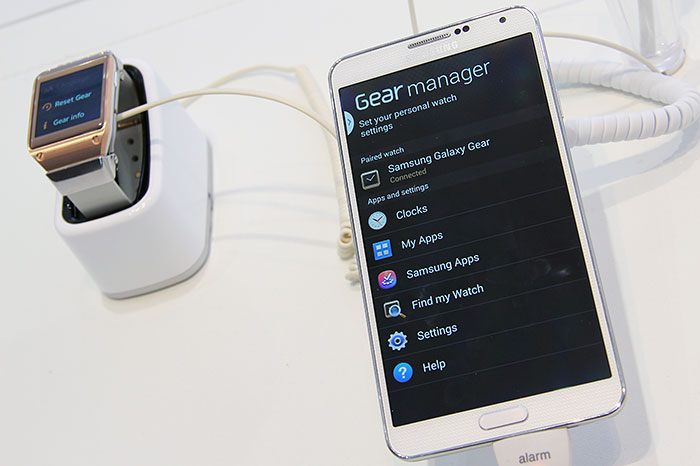