Are meetings the only way for hybrid workers to keep in touch?
Product Listing
CanonCasioDJIFujifilmGoProLeicaLGLytroNikonOlympusPanasonicPentaxRicohSamsungSonyVeho

Ten years ago, if someone had told you that mobile phones would get smaller while sporting more powerful processors, FM radio and the ability to snap photographs, you would have probably labelled them crazy. Yet here we are now with our current crop of smartphones being able to do all the aforementioned and even more.

So you may be wondering; if mobile phones can include built-in cameras, why can’t digital compact cameras include functions found in smartphones? Of course the digital compact camera user interface has gotten more simplified and recent models have begun to include Wi-Fi capability, but in terms of evolution of functions and features the humble camera lags behind the mobile phone.

And with the rise in popularity of amateur photography, users are demanding the ability to do minor edits on their pictures as well as uploading them on the spot, which of course is due, in large part, to smartphones being able to do the same. So what happens if you cross a smartphone and a camera? An interesting concept, which Samsung has made it a reality with the Galaxy Camera.

Sporting the Android OS, which is found on Android smartphones and tablets, the Galaxy Camera offers the image quality of a dedicated compact camera while sporting the sharing capabilities and extended functionality of a smartphone. So how does this combination camera fare? Join us as we find out. 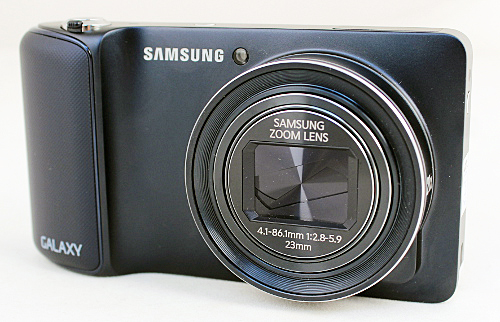 Write a Review
Compare This | Specifications
Versatile camera
Unlimited photo-editing and camera apps option from Google Play
Auto and Smart modes are both very intuitive
Easy to share photos/videos online
Average camera performance, but has an above-average asking price
Size and handling make it unwieldy for some
Accidentally setting a new AF point or snapping a shot due to large display
Expert mode is cumbersome
White balance adjustable in expert mode only
Our articles may contain affiliate links. If you buy through these links, we may earn a small commission.
Sponsored Links