Samsung Galaxy Buds+ review: Like AirPods for your Galaxy phone

Samsung Galaxy Buds+ review: Like AirPods for your Galaxy phone 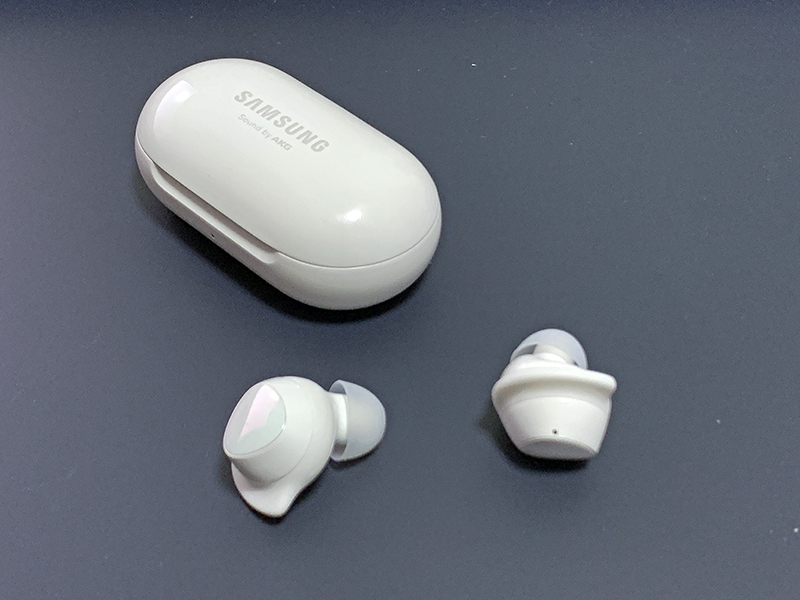 The Samsung Galaxy Buds+ was announced earlier at the Unpacked 2020 event alongside the Galaxy S20 and Galaxy Z Flip phones. They are the successor to the Galaxy Buds and it should come as no surprise to learn that they are to the Galaxy phones what the AirPods are to iPhones. After all, the latest Galaxy phones all come without headphone jacks.

At a recommended retail price of S$268, it’s not exactly something one could buy on a whim but neither is it as expensive as flagship models like Sony's WF-1000XM3 and Sennheiser's Momentum True Wireless 2. We took one for a spin over the past couple of weeks. Read on to find out what we think.

It would seem that Samsung has decided to go down the route of less is more with the design of the Galaxy Buds+. The model that we have is decked entirely in white and has pearly sheen to its neat round edges. For a bit of pizzazz, the earbuds themselves are capped off with a shimmering chromatic effect that’s subtly beautiful. Fret not if white isn't your colour, because the Galaxy Buds+ also comes in black, blue, red, pink, and now there's even a striking purple BTS edition. So if colour options are important, Samsung has you covered well. 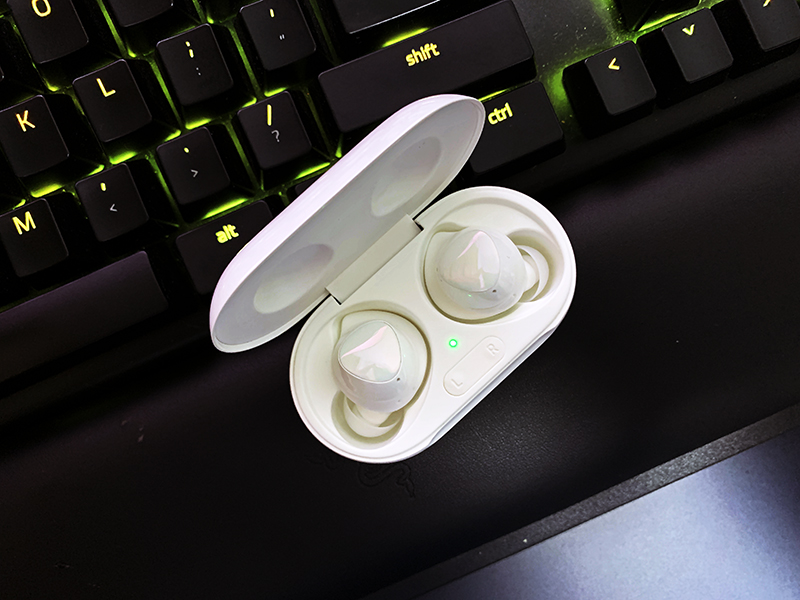 At this price point, it's not surprising at all to see that the construction is completely plastic. Fortunately, the plastic construction doesn’t feel that cheap. In fact, the pillbox-sized gadget has a satisfying amount of heft and feels quite solid.

Besides the earbuds, you’ll also find a USB-C charging cable and three sizes of silicone ear tips and fins in the box. If you have a Qi-certified wireless charger, go ahead and safely ignore the charging cable, as the Buds+ happily supports wireless charging – convenient for people who already have multiple devices that need charging.

The Galaxy Buds+ are surprisingly lightweight once you take them out of the case, but have no problem fitting into and staying in my ear. Noise isolation performs pretty much as expected, just like any other existing in-ear earphones. For best results, do try out all the different tips and wings until you find one that gives you the best fit. This makes the earbuds ideal for long periods of listening. They’re barely noticeable when in-ear and has a rated battery life of up to 11 hours. In a battery rundown test with the music playing at full volume, the Buds+ lasted me just under 10 hours, which is truly remarkable and sets a new standard for true wireless earbuds. This should be more than enough to get you through a day or two and it's great to know the marketing figures really live up to expectations.

The charging case however only holds one additional charge, but it does support fast charging -- rest the earbuds in the case for just 3 minutes and it'll be juiced up for around 60 minutes of listening time!

However, it’s important to note that the Buds+ are only IPX2 rated, as opposed to the IPX4 rating found on many other true wireless earbuds. This means that it can only withstand splashes from certain angles, so maybe don’t take it to the gym if you’re expecting to sweat buckets, and definitely don’t bring it into the shower.

If you have a Galaxy phone, pairing and setting up is dead simple. Simply, bring the Galaxy Buds+ next to your Galaxy phone and open the charging case. A prompt will appear on the phone asking if you want to pair them. For other devices, you'll have to do it manually either through your phone's Bluetooth settings or using the Galaxy Buds+ app. 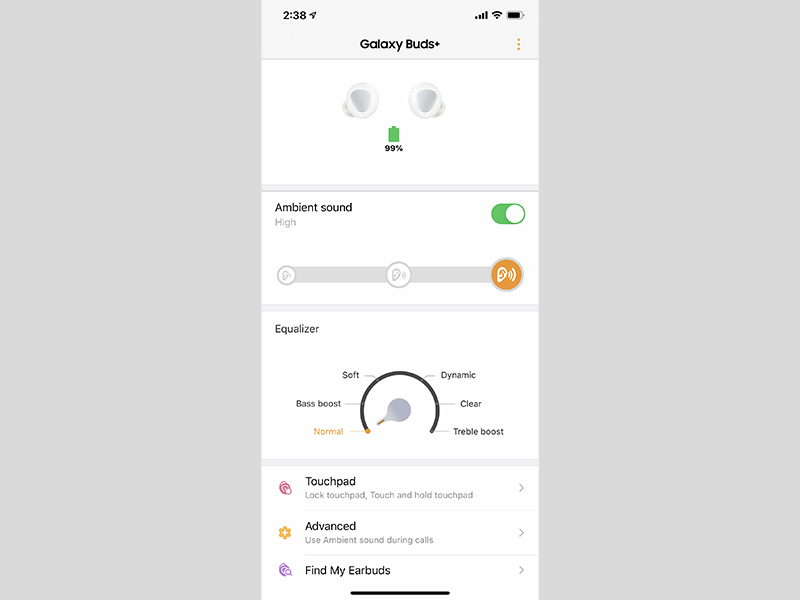 The app is available for both Android and iOS enhances the overall user experience with several nifty but limited features. There's a rudimentary equalizer within the app lets you choose if you want your music to sound “Normal”, “Dynamic” or enhanced with “Bass boost”, among others. You’re out of luck if you want finer control over the sound.

The app also lets you turn on “ambient sound”, a feature that lets in the noise from your surrounding environment into your earbuds. This is great for helping you pay attention to traffic and other potential hazards on the road, but it doesn’t work as well if you have your music volume turned all the way up. You’ll still be able to hear loud distinct sounds like a car horn, but general ambient noise like the rumble of traffic is less obvious, so make sure you pay attention to your immediate environment in any case.

Android users will appreciate the Spotify integration, which the Buds+ can summon upon activation, immediately playing a song that the algorithm gods think you’ll like. I’m not super adventurous when it comes to choosing music, so I don’t see myself using this feature a lot, but it can be useful for people who just want to pop the earbuds in and start listening. (This feature also supports FLO, Genie, and Melon, but Spotify is by far the most popular music streaming service round our part of the world.)

My personal favourite feature of the app is “Find My Earbuds”. No, it’s nothing as advanced as a GPS chip, but if you are within Bluetooth range, it will cause the earbuds to play a piercing loud chirp on loop when activated. This should help you find your earbuds whether they’re lost in the depths of your backpack, or in the next room. Just be careful not to activate it while the earbuds are in your ear, or it’s a certain trip to the doctor for hearing loss.

On the downside, there are a few annoyances that can hopefully be fixed in the next app or firmware update.

First, there is no way to turn off auto pause, which means the music stops every time you pull a single bud out of your ear. Some people like it, some people don’t, so it’ll be nice to have an option to toggle that.

The customization of the touch controls is also very limited. You can choose to turn touch controls off entirely or choose what happens when you tap-and-hold. But that’s it. There’s no option to remap the single, double, and triple tap commands, which will surely put off power users.

The Galaxy Buds+ touts a new dual-driver system that includes a tweeter and a woofer. In theory, this helps it produce a greater range with better clarity. Throw the AKG branding into the mix and it’s reasonable to expect better-than-average sound quality.

Generally, the earbuds produce very consumer-friendly sounds with a stronger emphasis on the bass and mid-range vocals. They’re not particularly stunning, but they definitely deliver on the promise of being better than average – more than good enough for regular commutes and casual listening.

The earbuds are particularly suited to watching videos on-the-go when cinematic sound is less of a concern. Whether it’s on snazzy social media videos, YouTube or even Netflix, the dialogue is clear and precise with no lag, and music is punchy at the right places.

Things are not so straightforward on the music front.

As mentioned, the Buds+ are tuned for the general consumer, which means the typical popular music of the day will sound just fine, whether it’s pop or hip-hop.

Ariana Grande and Justin Bieber sounded suitably vibrant in their new single Stuck with U, their voices well-defined and rising clearly above the punchy bass line. Marshmello and Halsey did no worse in Be Kind, pumping out a grooving tune that got us on our feet.

The flaws of the Buds+ start to show when you move into pieces that are less typical and demand more finesse.

In orchestral or musical theatre works, for example, the soundstage is too narrow to be enjoyable to the discerning listener. For example, the Buds+ failed to do justice to the 10th Anniversary Concert Cast of Les Misérables, where the seminal end of Act I – One Day More – fell flat instead of closing with a bang.

Solo instrumental pieces are also less impressive, coming across as less bright and warm compared to when they’re piped through a better headset. I heard noticeably less detail in Itzhak Perlman’s performance of Paganini’s 24 Caprices, for example.

Overall, the sound is not as good as what you’ll get on a high-end true wireless headset like the AirPods Pro and Sennheiser Momentum True Wireless. The Buds+ sounded noticeably muddier and tinnier in direct comparison.

However, let’s not forget that it’s also much cheaper than the aforementioned models. Samsung is not competing on that level. Instead, the true competitors of the Galaxy Buds+ are products like the regular non-pro AirPods. It is positioned as an enticing upgrade to your stock smartphone buds and the first step into the world of true wireless headphones.

Last but not least, call quality on the Galaxy Buds+ is surprisingly good. I took them through their paces over several calls, including an annoyingly long call with a bank’s help line, with totally zero issues. Speaking with a normal voice was enough for the other parties to hear me, and not once did I have to raise my voice. 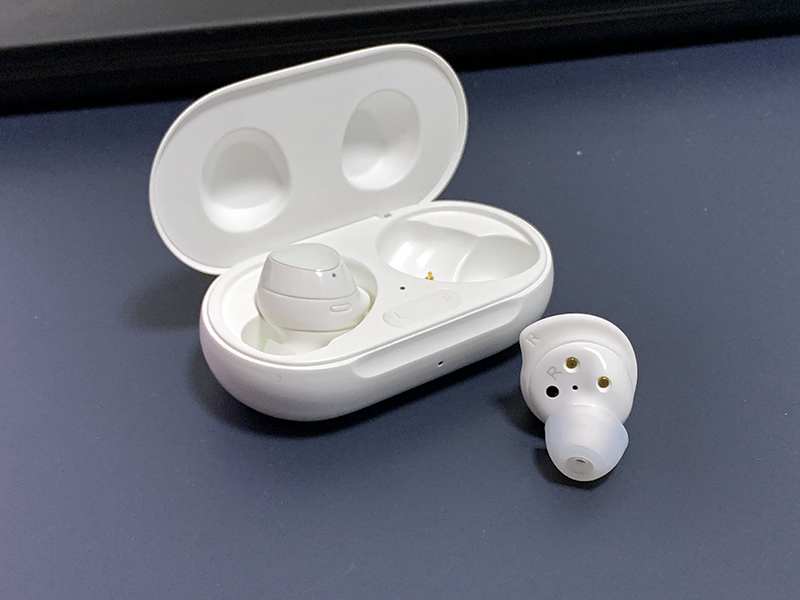 Incredible battery life aside, the Galaxy Buds+ don't really have any other standout feature. But that isn't necessarily a bad thing because they don't have any glaring flaws either.

Build quality is decent for the price, it sounds pretty solid for casual listening, they work well with Galaxy phones, and it comes with a wireless charging case out of the box. Overall, it's a very decent true wireless earbud, especially if you also own a Galaxy phone. There’s even proper support for the iPhone, giving Apple users a solid and cheaper alternative to the AirPods to consider if they're in the market for true wireless earbuds.

Perhaps the biggest thing that is holding us back from recommending the Galaxy Buds+ wholeheartedly is that there's no shortage of cheaper alternatives like the Soundpeats TruEngine 2. These cheaper alternatives might not be as refined and polished but they are considerably cheaper and that's an important consideration if all you want are earbuds that don't get tangled up.

In short, if you’re still using the stock earphones that came with your smartphone and you are looking for something that's truly wireless and a bit more refined in a modern form factor, then the Galaxy Buds+ might just be what you’re looking for. Plus the good call quality is a decent plus point that not all wireless earbuds can nail it right.

But if you need more premium features like active noise cancelling, you’ll have to look elsewhere at more expensive brands and models. But since this is Samsung we’re talking about – they seem to be dead set on conquering just about every single category of consumer electronics on the planet – I won’t be surprised to see a more premium or “pro” Galaxy Buds model with all the bells and whistles in the near future. (Meanwhile, Samsung technically does have wireless earbuds with active noise cancellation from AKG, a brand it owns.)

Write a Review
Compare This | Specifications
Stellar battery life
Good call quality
Easy pairing with Galaxy devices
Well-supported on iOS
Compact and pocketable
Wireless charging
No outstanding features
Average sound quality
Doesn't do much to stand out from cheaper alternatives
Our articles may contain affiliate links. If you buy through these links, we may earn a small commission.
Sponsored Links