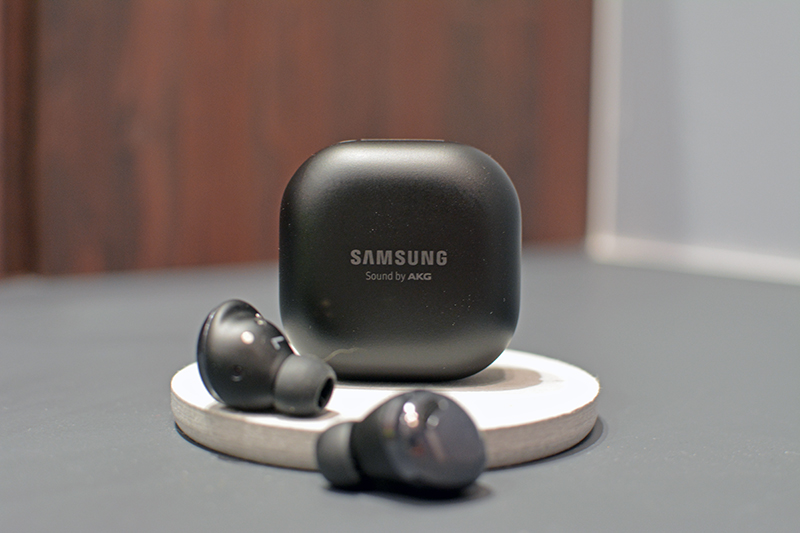 Everything you need without an inflated price tag

Think of a feature you’d like to see in a pair of true wireless earbuds. Active noise cancellation? Water-resistance? Wireless charging?

Whatever feature comes to mind, chances are Samsung already thought of it and made sure to include it in its new Galaxy Buds Pro. The company’s latest gadget comes with everything you’d expect in today’s true wireless earbuds, and then some.

Unfortunately, while it does everything well, it doesn’t really excel in any one particular category. And it isn’t particularly affordable either, hitting just above the S$300 mark when many other competing competent models clock in below that.

Let’s find out if it’s worth the upgrade.

Like the Galaxy Buds Live (which was just launched months back), the Galaxy Buds Pro comes in a compact case that looks like, well, a compact. It fits nicely in my palm and pockets, and has a nice and smooth matte finish. It doesn’t quite displace Google’s Pixel Buds from the most-pocketable mantle, but it comes close. 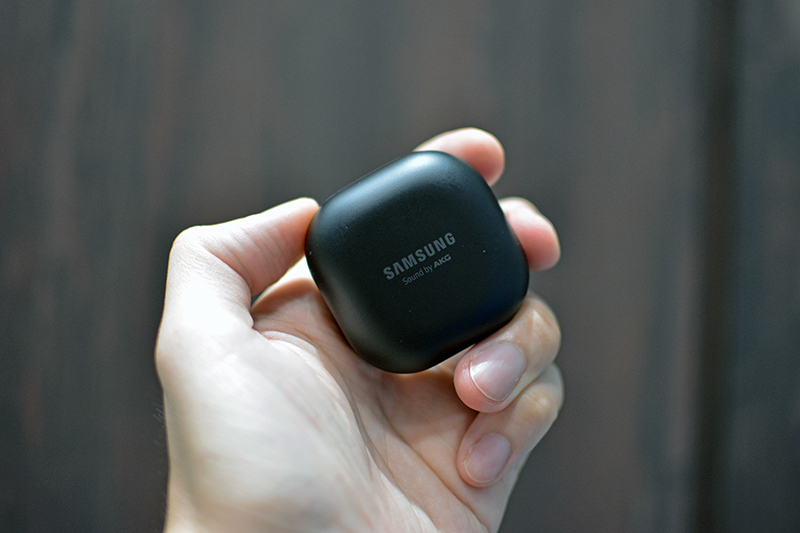 The potential disadvantage of having such a small case is battery life. Samsung says the Buds Pro is rated for a total battery life of up to 28 hours. Each individual charge can support up to 8 hours of listening time. This is a downgrade from the 11 hours on the Buds+, but it's on par with the Buds Live model. However, I didn’t find it much of an issue, since my ears can only withstand a few hours of having earbuds stuffed into it before I have to take a break.

The earbuds themselves are a world of difference from its Live sister, and that’s a very good thing.

Samsung has ditched that unique bean-shaped design and gone for something more conventionally rounded, along with silicone ear tips and a small ridge that helps it settle more comfortably in your ear. This tried and tested form factor, while nothing too exciting, actually fits well and creates a good seal that blocks out ambient noise. 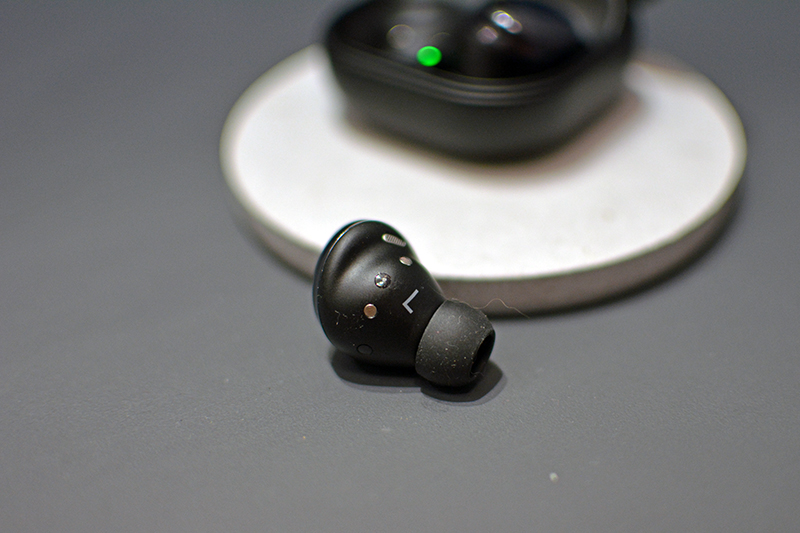 Still, I found the included ear tips a little on the small side. Even the largest one couldn’t completely seal up my ear. Without silicone wings like on the Buds+, they don’t settle in as snug. Nonetheless, it’s an overall good fit that affords a user experience that’s miles better than the Buds Live.

The Buds Pro comes with touch controls, just like its predecessor. Unfortunately, you still can’t customize them to your heart’s content. You can toggle touch input on or off, or customize what touch-and-hold does. And that’s it. Single taps, double taps, and tripe taps are all pre-programmed and unchangeable, so best get learnin’.

But wait, there’s more. To unlock all of the Galaxy Buds Pro’s features, you’ll have to go all in on Samsung’s Android phones and tablets. There are three such notable features in particular: 3D audio, Auto Switch, and Bixby voice wake-up.

3D audio is Samsung’s answer to the rise of spatial audio on true wireless earbuds, and it works with videos with Dolby surround sound. Plus, Samsung says there’s head tracking technology that keeps the sound right in front of you even if you turn your head, which will make movies sound more life-like. Sadly, it works only for Samsung’s Android 11 devices running OneUI 3.1, which currently is only available on its latest flagship Galaxy S21 phones, so I didn’t get to test it out right this instant. But even if I could, my mileage is limited to only with the very latest Samsung mobile devices.

With Auto Switch, the Buds Pro will jump automatically between your Samsung phone or tablet depending on usage. One example is when you’re watching a movie on your Tab, but a call comes in on your phone. The earbuds will switch its connection so you can pick up the call. Once the call ends, it will switch back to the tablet – all by itself without user interaction.

Lastly, Bixby voice wake-up lets you, well, wake up Bixby with just your voice. Personally, I can’t see any use for Bixby on a device with the powerful Google Assistant already built into the Android OS, but given Samsung’s relentless push to get its own voice assistant into all of its appliances, I can’t see Bixby going away anytime soon either.

Unfortunately, you can’t change the voice wake-up to Google Assistant, nor can you programme any input command to summon it. Like it or not, the Galaxy Buds Pro forces you to stick with Bixby.

Making your devices work seamlessly with each other while building walls to keep out the riff-raff is a trick right out of Apple’s playbook. It naturally adds value to you if you’re a loyal customer, but the earbuds become less compelling if you prefer a more diverse stable of personal devices.

Regardless, the Galaxy Buds Pro checks all the necessary boxes to be a flagship true wireless earbuds today. It isn’t quite a killer of other brands’ flagship models, but you’ll find all the necessary extras to call it one, including wireless charging and IPX7-rated resistance.

The Galaxy Buds Pro is undisputedly the best sounding Galaxy Buds compared to its previous generations, and the difference was immediately noticeable the first time I hit play.

Its 11mm tweeter and 6.5mm woofer work together to produce an enjoyable sound with the lows, mids, and highs sufficiently clear and balanced so they don’t sound overly stuck and muddied in the middle of your head. 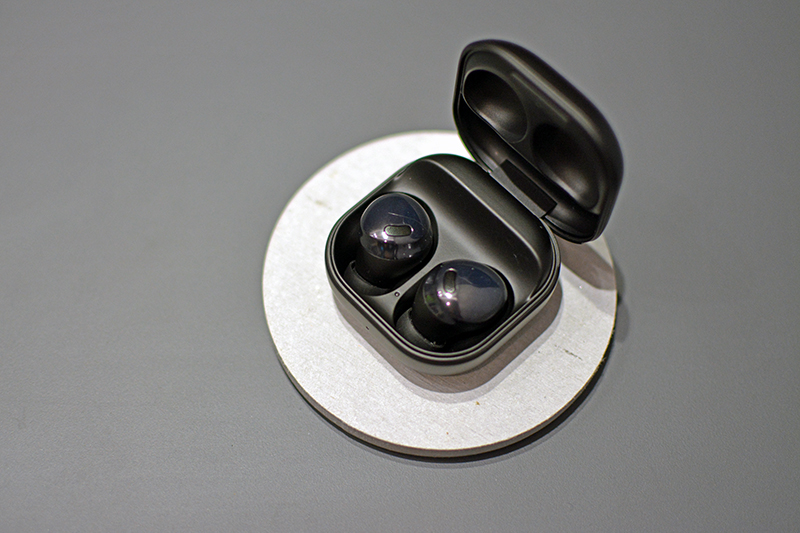 The sound quality doesn’t quite take my breath away, but I also didn’t feel the immediate need to go play around with the equalizer because the Buds Pro easily handled the popular tracks of the day with aplomb, whether they’re bass-heavy pieces or lighter treble-focused songs.

Then again, it’s not like you can do much with the equalizer either. Samsung only gives you a few preset options like “bass boost”, “soft” or “treble boost”, and the difference between them are very subtle depending on what you’re listening to. So, I mostly just stuck with “Normal”, which served me well enough.

Things can get a little tricky on a more complicated rock song like My Chemical Romance’s Helena, but it still sounded good on the Galaxy Buds Pro with an appropriately wide soundstage. I could hear the vocals clearly taking center stage, carried by the bass and guitar accompaniment while the drums support from the back.

The Buds Pro, however, comes with proper silicone ear tips for better passive noise isolation, which enabled the ANC to work its magic.

As expected, Samsung’s claim that its ANC can block up to 99 percent of outside noise was pure hyperbole. The ANC worked well enough to stifle low, rumbling, and repetitive sounds like buses, the relentless rainy weather around the country, or the murmur of an air conditioner. But it’s nowhere near as powerful as what Sony, Panasonic, or even Apple managed to accomplish with their respective earbuds. 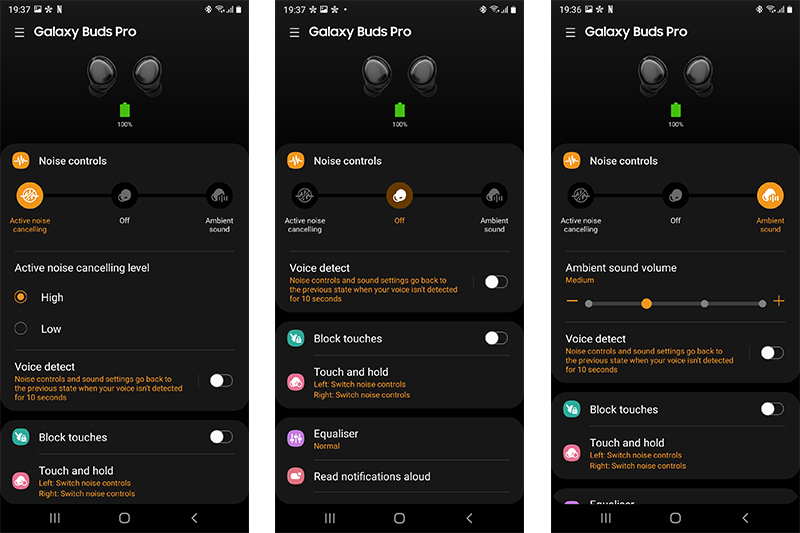 The ANC is adjustable in a limited fashion – you can either set it to strong or weak. There’s not a lot of difference between them, but I imagine they should help with battery life. Ambient sound volume can be adjusted more liberally, ranging in four steps from low to extra high, but voices start to sound rather artificial towards the higher end.

The Galaxy Buds Pro has an added piece of magic Samsung calls voice detect. With this turned on, the Buds Pro will automatically lower your music volume and turn on ambient sound the moment it detects your voice.

This is helpful in various scenarios, such as when your colleague needs to talk to you, or if you need to order food at the kopitiam. But there’s a bit of lag and it takes a while for the music to come back on, so I prefer to manually trigger ambient sound whenever I need to. If you enjoy singing along your favourite tunes, you’ll definitely want to turn voice detect off, or it will turn itself on every time you start singing.

Samsung talked up the call quality of the Galaxy Buds Pro, but it was… fine. Like all other true wireless earbuds, I could do most calls on them without an issue, and there were times when I had to repeat myself several times just to be heard. 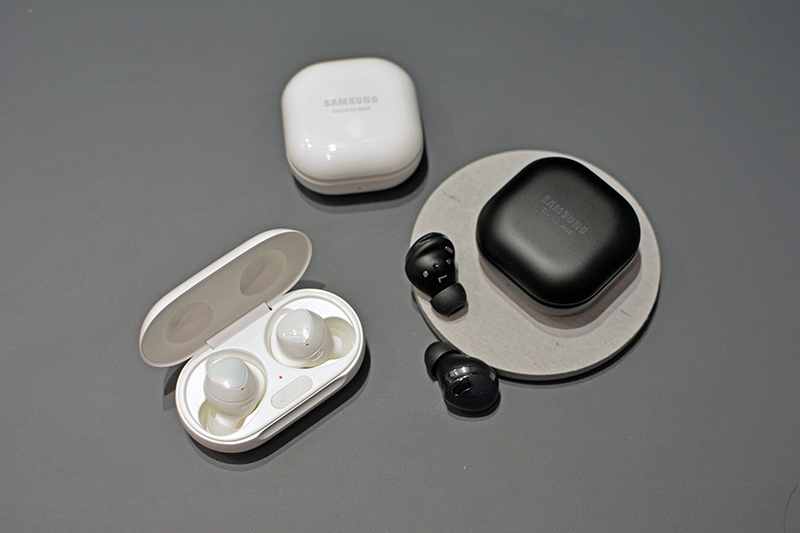 While I never would have considered using the Galaxy Buds Live as my daily driver, I could see myself buying the Buds Pro if I didn’t already own an existing set of true wireless earbuds. They do everything well, from hardware design to sound quality to little useful features to make your life easier while wearing them.

While it doesn’t have that one truly compelling feature that turns heads – such as great sound being the Sennheiser CX400 BT’s unique selling point – it more than makes up for it with an expansive feature set that satisfies almost every need I can think of.

So, if you’re looking for an all-rounder true wireless earbuds, the Galaxy Buds Pro might just be the jack of all trades you’re looking for. Better yet, if you're buying into the latest Galaxy S21 phones, you'll unlock features that are part of the Samsung ecosystem and even enable Multi Mic Recording functionality that can improve your vlogging needs without spending a whole lot more.

Write a Review
Compare This | Specifications
Comprehensive feature-set
Samsung’s best sound yet
IPX7 water resistance
Voice detect makes conversations easier
Adjustable ANC and ambient sound
Some features exclusive only to Samsung devices
Limited touch controls customization
ANC not as powerful as competition
Not compatible with Google Assistant
Our articles may contain affiliate links. If you buy through these links, we may earn a small commission.
Sponsored Links