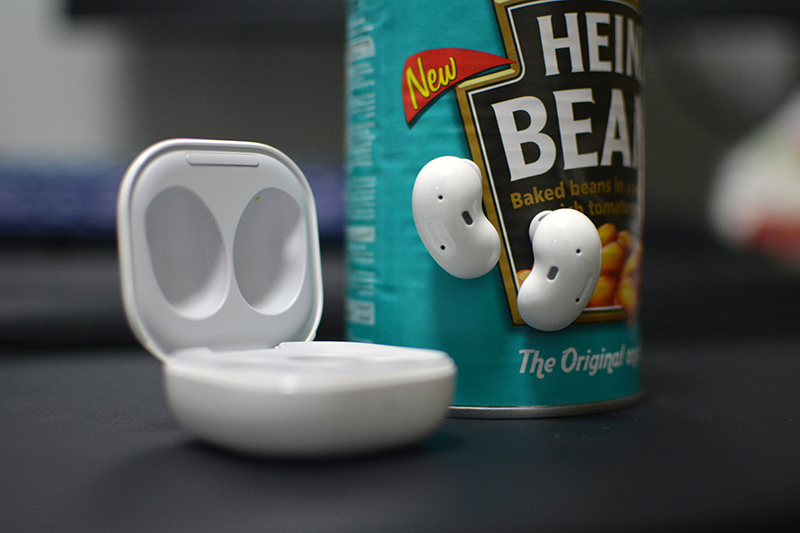 It has bean several weeks since I started testing the Samsung Galaxy Buds Live true wireless earbuds on a daily basis. And yes, they do look a lot like beans, but don’t worry – you won’t need a can opener to get into these cans.

All jokes aside, it’s not a bad look. The Galaxy Buds Live has a bold, distinctive design that’s unlike anything else on the market. Who are these earbuds meant for? And should you switch over from your current favourite pair? And most importantly, is it worth the S$288 asking price?

Let’s dive in to find out.

As mentioned above, it’s evident from first glance that the Galaxy Buds Live has a very unique design and style that’s in a class of its own. This is especially so if you choose the striking Mystic Bronze colour option, which is completely unlike anything else on the market and pairs perfectly with the Galaxy Note 20. But our review unit came in glossy white, just like the Galaxy Buds+, so we inadvertently had flashbacks once again to the design language previously favoured by Apple and is still alive in some products like the AirPods. At any rate, it's an interesting and refreshing design. And like the Galaxy Buds+, the case feels good in the hands and has a nice heft.

That’s about where the similarities between the two Samsung earbuds end. Compared to the chunky rounded pillbox of the Galaxy Buds+ – and truthfully almost every other true wireless earbuds out there – the Galaxy Buds Live is one of the most pocketable I’ve tried, thanks to its compact squarish shape with rounded corners. Just look at the photo above to get a sense of how small it is. 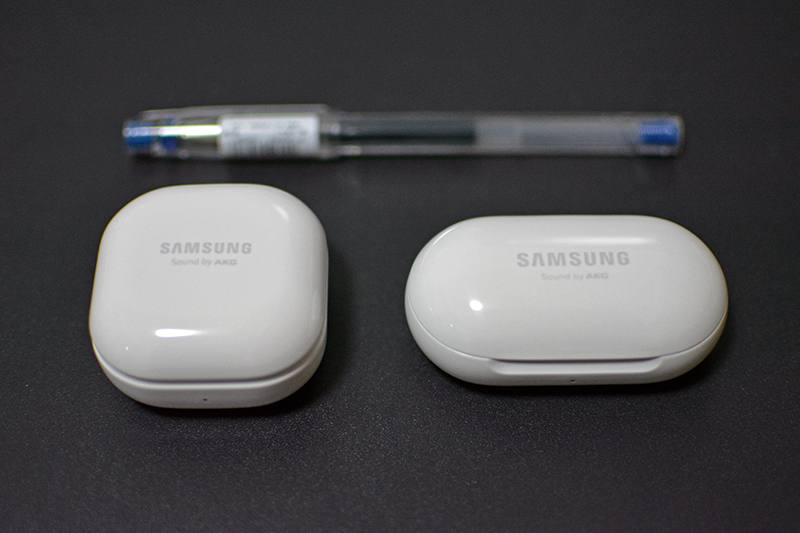 My wife also pointed out that it looks a make-up compact, a metaphor that was further reinforced by the way the lid flips open and close with a satisfying clap.

Once the case is open, you’ll see the bean-shaped earbuds in all their glory. They rest at an angle in the case and are secured magnetically, so picking them up was a cinch. If you have a phone that’s running Android 5.0 or higher, you’ll immediately get a pop-up prompting you to pair. No such luck on iOS, you’ll have to pair them manually. With pairing out of the way, it was time to insert the beans into my ear (fun fact: there’s an actual, real song named Beans In My Ears. The more you know!) I struggled a little with putting it on at first, because there is absolutely no previous frame of reference for how one can wear a bean-shaped gadget in one’s ear. It turns out that the best way to put it on is really to just stick one end of it deep into your ear, with the rest of the bean resting on your ear at an angle.

Samsung used the phrases “ergonomic design” and “adaptive fit” in its marketing materials, so I set out to test these claims by making a few friends try out the earbuds. They did seem to fit fine no matter the size of their ears, so it looks like Samsung did their homework.

Wearing comfort is high because they have an earbuds design as opposed to an in-ear one, which means nothing sticks into your ear canals. But this design choice has downsides too. The degree of seal and fit will vary depending on your ear shape, and without silicone wings or ear tips, the Galaxy Buds Live don't sit as securely. For me, they sit quite loosely in my ears. 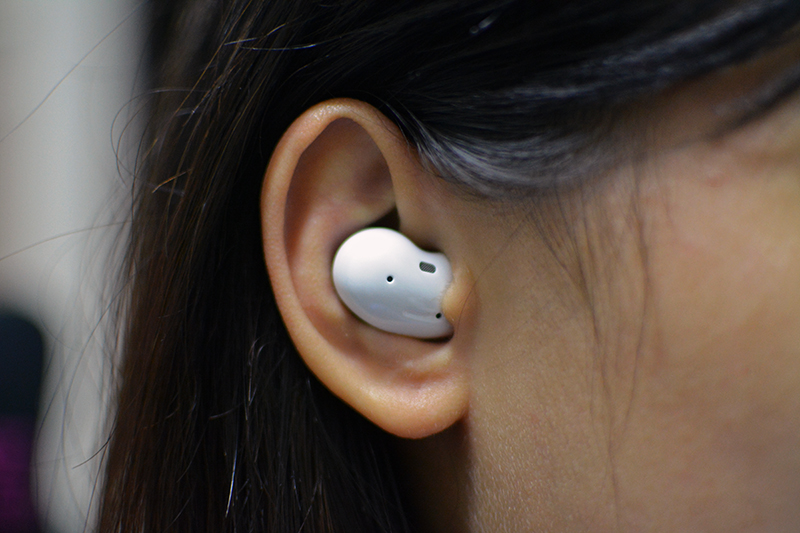 While that led to better overall comfort, I found that the earbuds tend to try to inch their way out of my ear whenever I shook my head, or even just try to smile or open my mouth, due to interconnected facial muscles. This means it’s probably not a good idea to take it out running or you’ll risk losing them in the middle of vigorous activity.

Given its poor IPX2 rating, you probably won’t want to expose it to the elements too much anyway. In case you are wondering about the specifics, IPX2 means it's protected against spraying water when tilted up to 15 degrees vertically. In other words, given its not-insignificant price, you probably won't want to take any chances with it.

The loose fit had me constantly reach out and push the earbuds back in, which brings me to yet another episode of my number one running gripe of true wireless earbuds: touch controls. Samsung has somehow made this experience worse on the Galaxy Buds Live because it’s not clear where exactly on the bean I’m supposed to touch to control it. Is it the tip of the bean? The middle part? No matter. You’re going to register a heck lot of mis-taps on this thing. 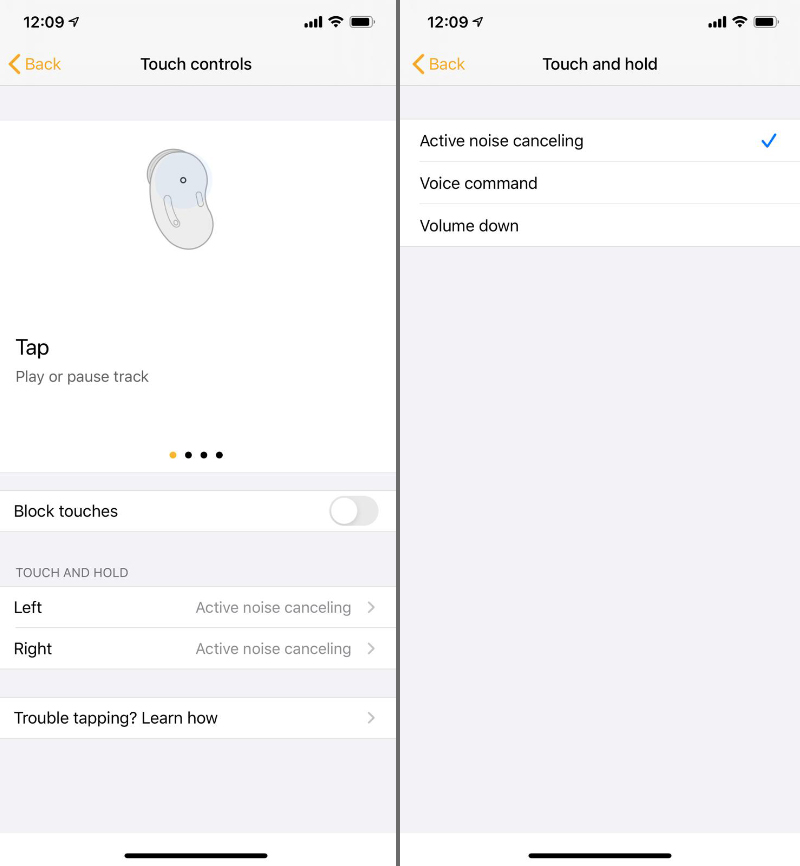 Compared to Google’s second-gen Pixel Buds, what I currently consider the gold standard of touch controls on true wireless earbuds, the controls on the Galaxy Buds Live is limiting and unintuitive. It doesn’t even have the basic function of turning the volume up or down built in. You have to programme it yourself with the only customisable gesture available: tap-and-hold. But if you use it for volume controls, you'll lose the ability to activate and deactivate active noise-cancelling. While this is annoying, the Galaxy Buds Live aren't the only earbuds to be guilty of such clumsy controls. Apple's AirPods Pro, for example, don't have built-in volume controls too.

Let me preface this section by saying first that the sound quality and effectiveness of the active noise-cancelling feature are going to depend greatly on how good a seal you can achieve. And for me, I can't say that the Galaxy Buds Live were a good fit at all.

I found that the Galaxy Buds Live lets in a lot of ambient noise, so much so that the active noise cancellation has virtually no effect. Sure, I do notice a bit of a difference in the level of droning sounds that the Galaxy Buds Live can jam out, but the sound of my air conditioner is the least of my concerns when I can clearly hear kids yelling from the playground downstairs. The experience is even worse on a commute, with the Galaxy Buds Live failing to block or filter out every single wave of noise, whether it’s the rumble of the MRT or the high-pitched screech of train brakes.

Ironically, the Galaxy Buds+ actually block out more noise with its ear tips even though it doesn't have ANC. Sometimes, it's best to go old school. To be fair, the open concept does lead to better comfort with less pressure build-up. Also, it lets you hear your surroundings better, which may be an important consideration for some readers.

As for audio quality, the Galaxy Buds Live feature relatively large 12mm drivers tuned by headphone specialists AKG (owned by Harman and a subsidiary of Samsung). It also has what Samsung calls "bass ducts" to create deep, rich bass. Unfortunately, I'm afraid to say that my inability to get a decent seal resulted in a lacklustre listening experience. 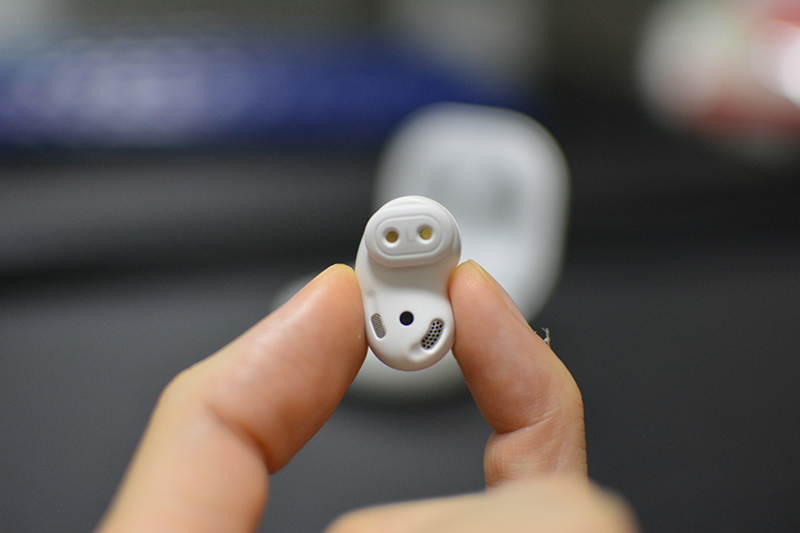 As detailed in my previous review, the Galaxy Buds+ features a dual-driver system that produced very consumer-friendly sound that makes it pleasant to listen to. But more importantly, it's in-ear design allowed me to get a better seal, which gave it the edge over the Galaxy Buds Live, even with its larger drivers.

To be sure, I went back to the same tracks I used to test the Galaxy Buds+ and listened to them side-by-side with the Galaxy Buds Live. These include the Ariana Grande and Justin Bieber’s Stuck with U, and Marshmello and Halsey’s Be Kind.

I found the Galaxy Buds Live’s rendition of both tracks to be shallower and less warm compared to that of the Galaxy Buds+. Coupled with its non-existent seal, you get an overall soundstage that’s noticeably flatter. The issue is exacerbated when you try to counter ambient noise by pumping up the volume of the earbuds, resulting in painfully loud sound without much detail.

Again, to be fair here, what you get out of the Galaxy Buds Live is going to depend greatly on how good a seal you get, and there are some reviewers out there who seem to have much better results.

It's not all bad

Two areas that Samsung did deliver on the Galaxy Buds Live are its battery life and call quality.

Samsung promised 8 hours of listening time on a single charge, and up to 21 hours together with the charging case. Although this is lower than that of the Galaxy Buds+, they are comparable with other flagship models and do come close to that number in my real-world test.

Call quality was similarly outstanding. With a total of three beam-forming mics, I could field several phone calls for work on the Galaxy Buds Live with no issues. Samsung says that it has also built in a “voice pickup unit” that can sense when your jaw is moving, converting that resulting vibration data into voice signals. Sounds like complicated tech, but it works.

Like the Galaxy Buds+, the Galaxy Live also has Spotify integration on supported Android phones. This means you can just tap and hold the earbuds to instantly jump into a playlist of your choice.

If you’re one of the few people in the world who actually use Bixby, then you might find the always-on Bixby useful. The Galaxy Buds Live lets you summon up the smart assistant with just your voice, without having to touch a single button.

Conclusion: Try it out first 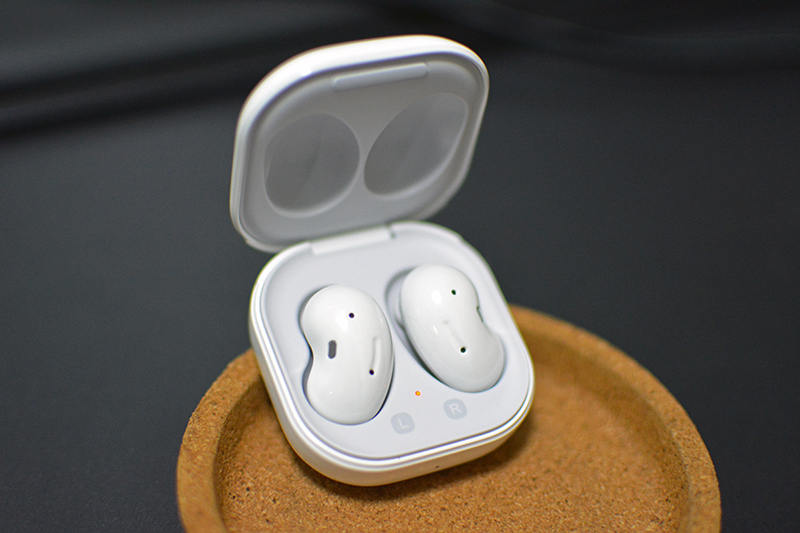 The Galaxy Buds Live have an undeniably interesting design, and they look especially striking in Mystic Bronze. The level of fit and finish is very high too, which commensurate with their high S$288 price tag.

Battery life is impressive too. At 8 hours on a single charge, it's one of the longest of any true wireless earbud. Microphone performance was commendable, which can be crucial for some readers considering how many of us are working remotely now.

But the biggest issue with it is fit. It's safe to say that you'll find the Galaxy Buds Live to be disappointing if you can't get them to fit well. So, our recommendation would be to go down to a store and try them out for yourself first. But even if they do, there's the Galaxy Buds+ which are slightly cheaper and, to me at least, sound and fit better.

In short, there are a couple of things that the Galaxy Buds Live do really well, but the unfortunate thing is that all of it hinges on how well you can get it to fit your ears. It also makes us wonder why Samsung didn't opt for an arguably safer in-ear design instead.

Still, I suspect some people won't be too bothered because it looks the absolute business in Mystic Bronze.