The pico projector smartphone is not a new concept, at least not with Samsung. First glimpsed at Mobile World Congress 2012 at Barcelona and later seen at the Samsung South East Asia Oceania Forum 2012, the new Samsung Galaxy Beam (2012) is finally here to stay on our sunny island. Its predecessor, the Samsung Galaxy Beam (yep, you got that right) first made the headlines two years back, condensing pico projector features into the form factor of a mobile phone.

When the niche device first came out, it was criticized for being overtly bulky and clunky; the newer Galaxy Beam seeks to address the issue with a slimmer and lighter body. Aside hardware and software updates, what else is there to look forward to in the new Beam rendition? Here's a quick chart to compare both smartphones: The new Samsung Galaxy Beam improves in leaps and bounds from a design perspective, showcasing a relatively attractive body. While it is still generally sheathed in plastic like its predecessor was, it doesn't look tacky or cheap and actually comes across as polished and funky. The phone is wrapped by a yellow plastic trim and framed by a black body. 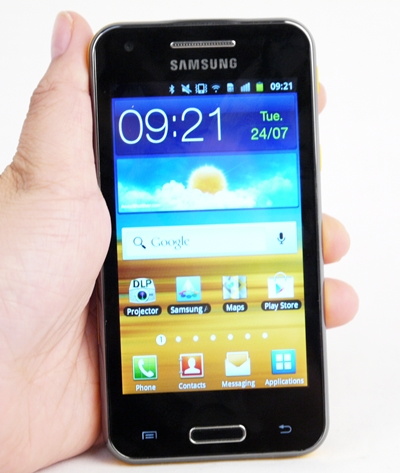 Curved at the edges, the phone generally fits well into our palms; with the addition of a grooved back case, the phone feels rather slip-resistant. This is definitely a welcomed aspect given that the projector lens is vulnerably placed at the top with no cover or casing, and users wouldn't want to risk dropping the device. 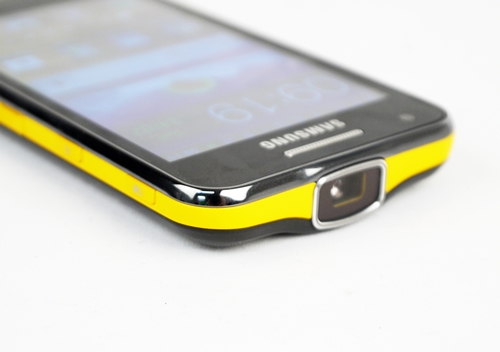 With dimensions of 124 x 64.2 x 12.5mm and a weight of 145g, the device is slightly wider than its predecessor but noticeably thinner and lighter. Nonetheless, because of its built-in projector, the new Samsung Galaxy Beam still remains bulkier and heavier than most of the slimmer and lighter smartphones out in the market (relatively speaking). Take for example: comparing it to the Samsung Galaxy S III (8.6mm, 133g), the new Galaxy Beam does seem a tad intimidating.

Otherwise, usability is generally positive here with tactile physical buttons. The projector button is laid at the top on the right profile of the phone, allowing for quick access to its projection capabilities. As a word of caution - users transiting from a regular smartphone might need some time to get comfortable with the button layout; the power button, usually located at the top, has been relegated to a spot below the projector button. Strangely, both microSD and SIM card slots are located on either side of the phone despite having a removable 2000mAh battery. This causes the sides to be a little too cluttered for our liking but this isn't something that will make or break the Galaxy Beam experience. 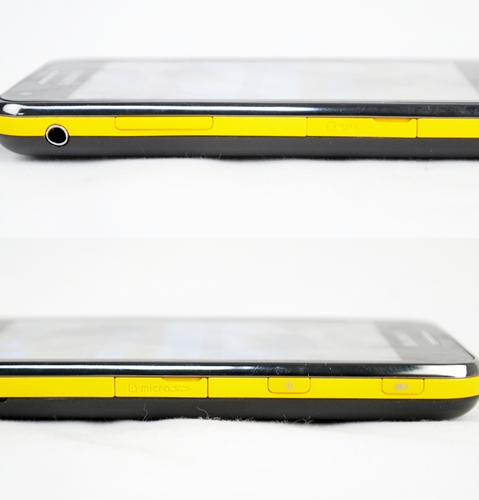 The new Samsung Galaxy Beam is equipped with the usual TouchWiz UI, of which we aren't going to elaborate much here, and the rather outdated Android 2.3 OS. For the uninitiated, the TouchWiz UI is Samsung's trademark user interface, one that seemingly takes a leaf out of Apple's clean iOS design. The usual Samsung add-ons like Game Hub, ChatON, Samsung Apps, and Social Hub make appearances here as part of the Korean company's additional services.

The main subject of interest here, is of course, the phone's projector capability. Pico projectors have been in the market for quite some time now but the projector smartphone still remains a relatively novel concept. Our experience on the first Galaxy Beam was a little rough on the edges - interesting yet experimental in nature -, and the new successor happens to improve this somewhat. Both Quick Pad option, a feature that allows the user to bring up a cursor-shaped pointer or type text, and the Visual Presenter option, a feature that allows images or videos to be captured via the cameras lens and projected real-time, both make reappearances on the new Galaxy Beam. 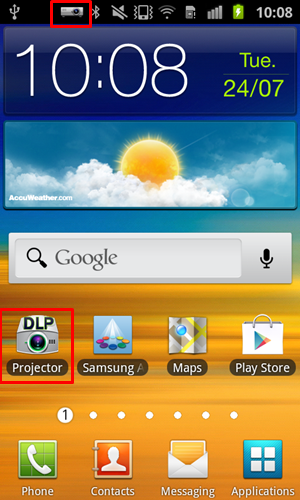 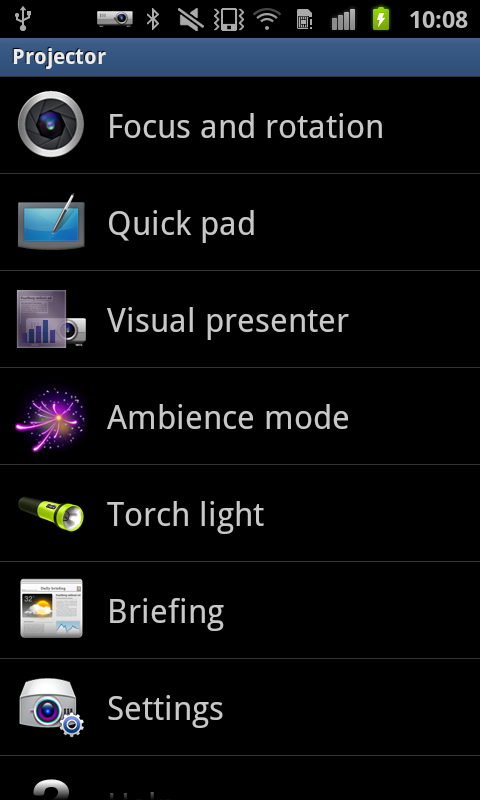 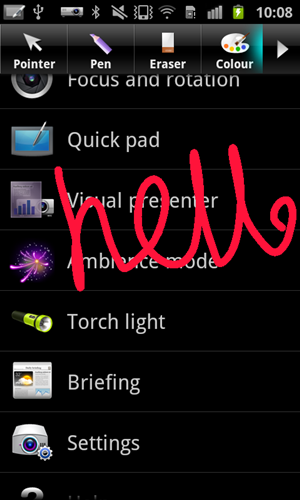 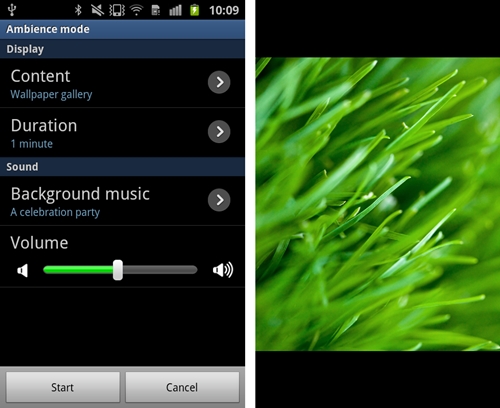 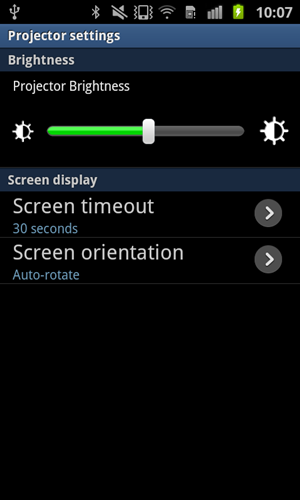 Like we mentioned earlier, you can activate the projector via the projector button. If you are playing a video from your gallery and want to project it on the screen, simply long press the button; you don't have to go into the app specifically to activate it. Likewise, long press the same button to switch it off. The Samsung Galaxy Beam gets a boost with a higher output level of 15 lumens, up from its predecessor's 9.5 lumens, matching the average lumens level of current pico projectors (12 to 15). This makes it easier to discern projections in difficult lighting conditions, say in brightly-lit places. 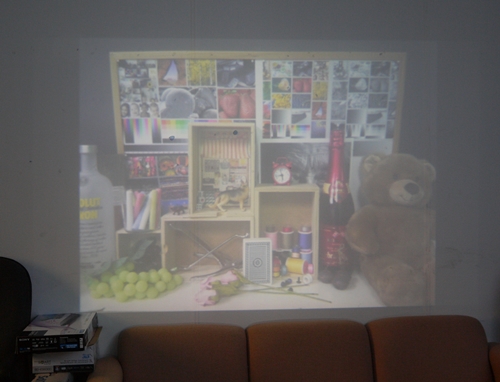 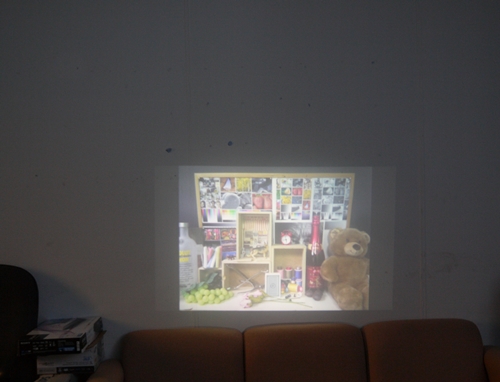 Of course, you cannot expect it to match the quality of standalone dedicated projectors as Samsung states that the device can only display images up to 50 inches across at a resolution of 640 x 360 pixels. As a general rule of thumb, the Galaxy Beam works best when projecting on a white space in a reasonably dark room. Furthermore, our test findings shown above actually reveal that the projection works best if the output size is kept at no larger than 40-inches across.

Read 1 User Review
★ ★ ★ ★ ★
Write a Review
Compare This | Specifications
Good range of features for its built-in projector
Good performance
Reasonable battery life
Bulky and heavy build
Outdated 2.3 Android OS
Below average camera capabilities
Our articles may contain affiliate links. If you buy through these links, we may earn a small commission.
Sponsored Links