In the low-end and midrange, One UI is Samsung's ace in the hole, giving the Korean company a significant advantage over the often visually jarring, unpolished software interfaces of Chinese competitors. The A80 has it atop an Android 9.0 base. 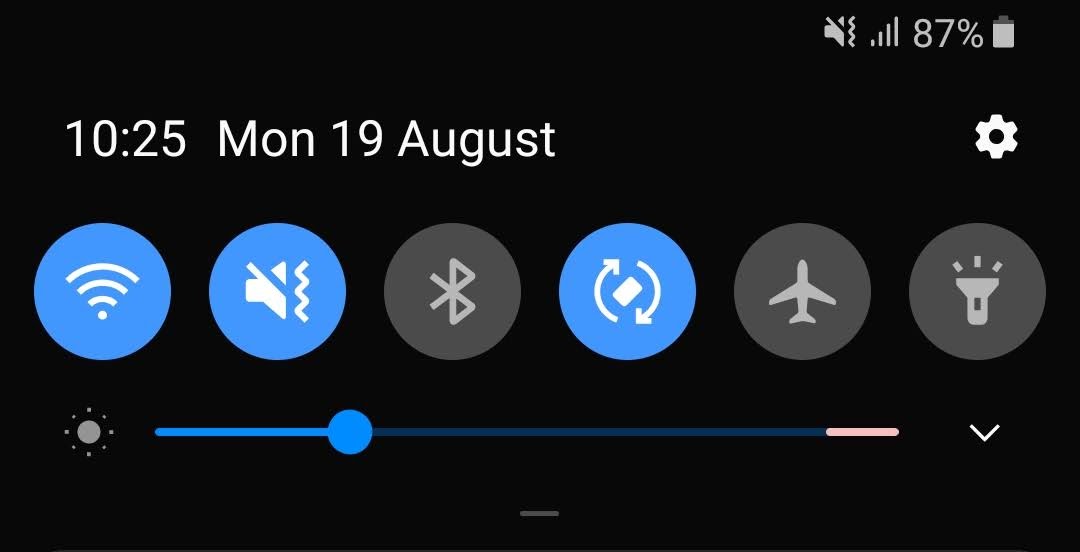 My sole nitpick would be that One UI seems rather resource-heavy. Performance — which we'll talk about in detail next— was certainly adequate, but I've seen faster phones that cost less.

It didn't seem like so long ago that the phrase "mid-range Android smartphone processor" meant putting up with eight merely adequate Cortex-A53 cores clocked at 1.8GHz (think Qualcomm’s Snapdragon 625 on everything from (Mi) A1 to Zenfone.) Day by day, though, phones in this segment are closing the gap with flagship devices.

You could throw a stone into a phone shop and easily hit something like this - something such as the Samsung Galaxy A80. It runs the game-optimised Snapdragon 730G, and its two Kryo 470 cores, running at 2.2GHz, are derived from ARM's fastest architecture at the moment, the Cortex-A76. That's similar to what's on the Snapdragon 855! These are helped out by six more A55-derived Kryo cores clocked at 1.8GHz.

We’ve pitted the A80 against other recent mid-rangers in these tests (be it price-point matched or target-segment matched devices), and also thrown in Huawei’s Honor View 20 which uses Huawei’s flagship chip, the Kirin 980. See, I told you mid-rangers were behaving like flagships now. 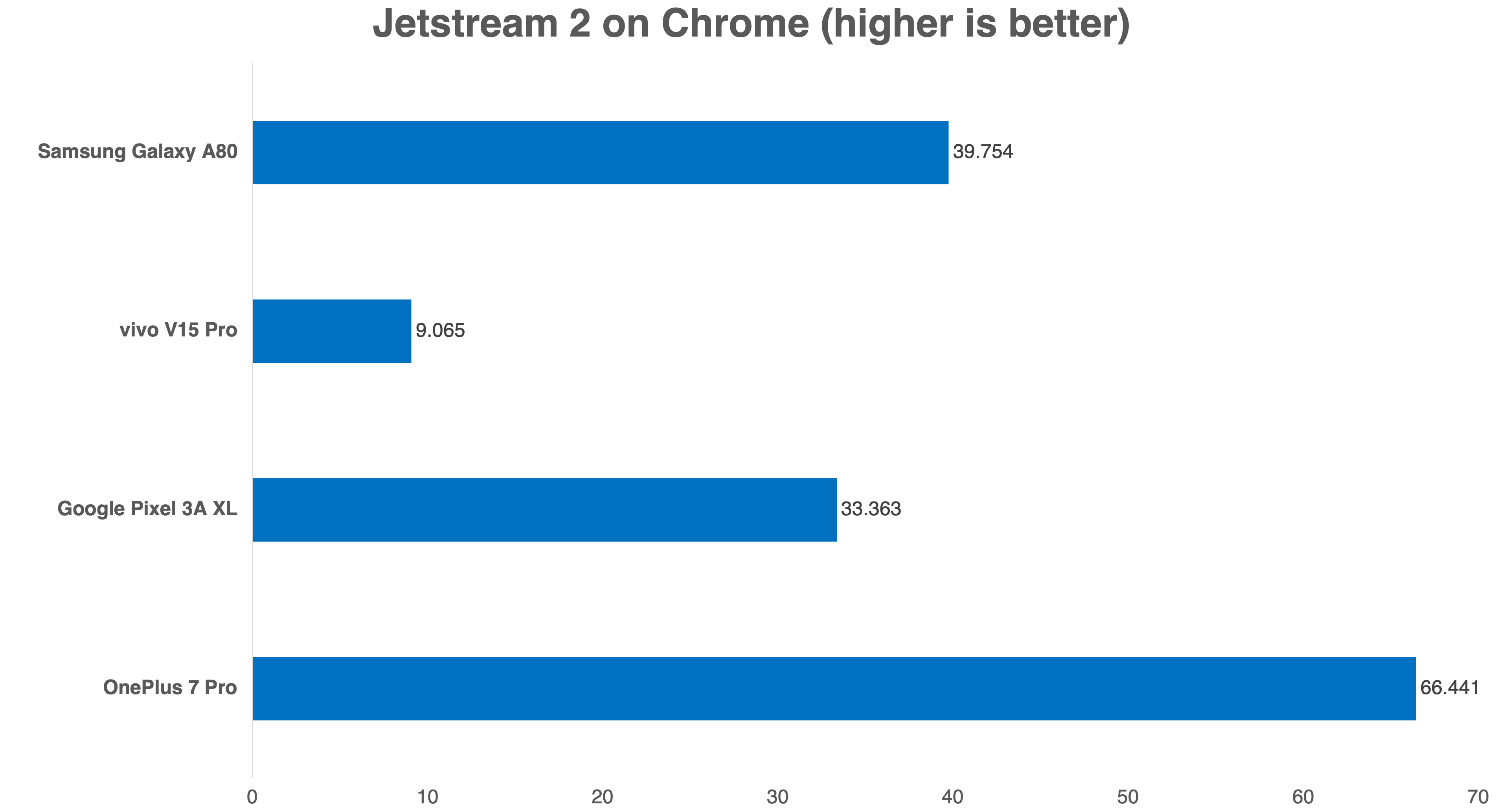 In Jetstream 2.0, which tests browser JavaScript performance across a range of real-world situations, the A80 saw off the Snapdragon 67x-equipped Vivo V15 Pro and Pixel 3A XL - the former by quite a margin. The OnePlus 7 Pro, with its flagship-class Snapdragon 855 processor, was the runaway leader here.

Antutu and Geekbench measure system performance over a variety of factors in real-world usage scenarios, such as CPU performance, RAM, and storage. And again, the performance of the A80 led the Snapdragon 67x-series devices but expectedly fell behind the Kirin 980 in the View 20.

Now for graphics performance in 3DMark. Compared to the "vanilla" Snapdragon 730, the 730G actually has a faster-clocked Adreno 618 GPU (825MHz versus 700MHz in the 730) and faster "big" cores. Here, the A80 slotted in nicely above the 600-series devices but was still outperformed by the Honor View 20.

On the power side of things, despite the huge 6.7-inch AMOLED display and moderately-sized 3,700mAh battery, the A80 was able to keep going for over 14 hours! It comfortably outlasted its rivals by at nearly 1.5 hours. This may be due to better driver and hardware optimisation or the newer Hexagon 688 DSP in the Snapdragon 730G chip. 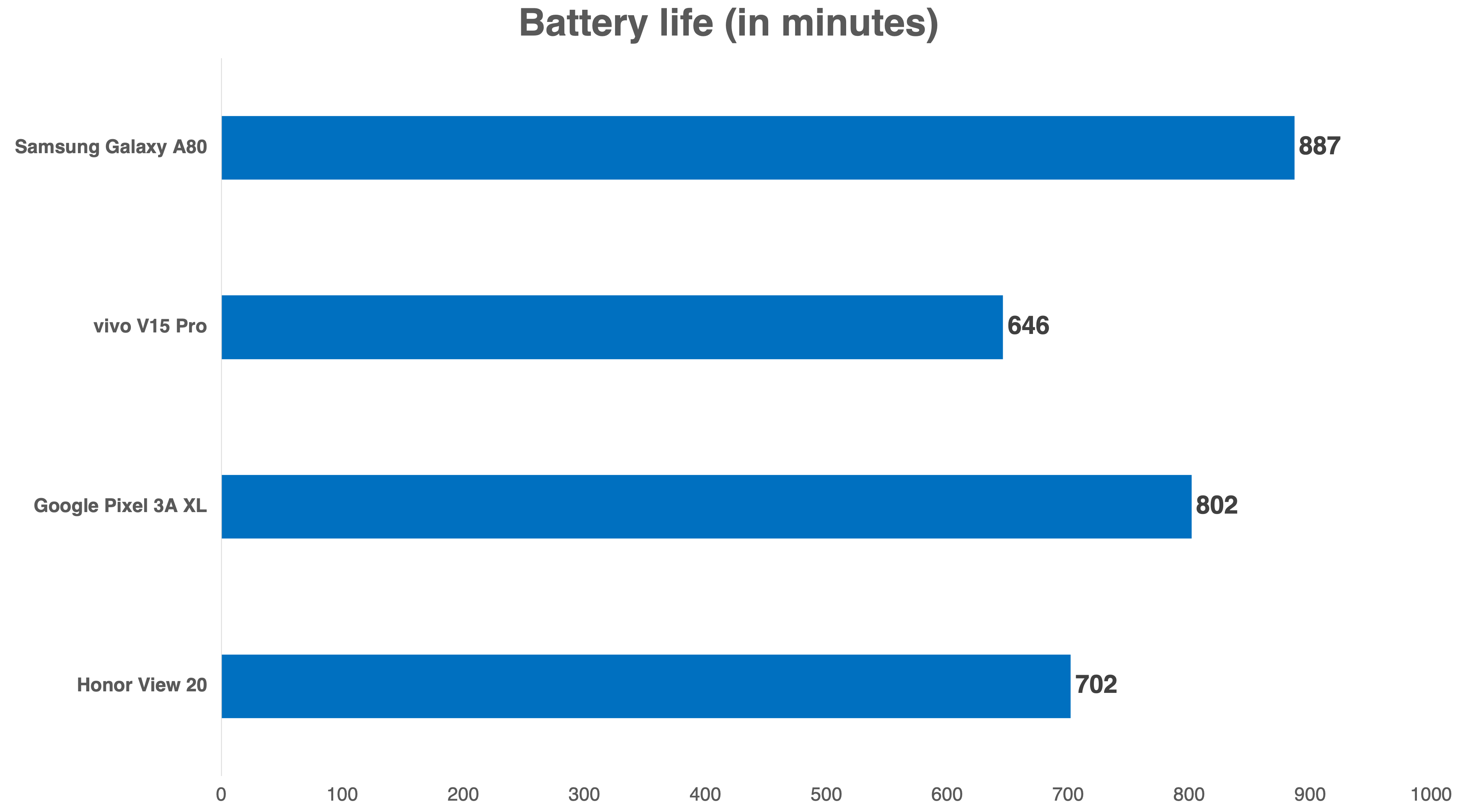 My eminent colleagues and I know that benchmarks don't lie, but they don't tell the whole truth, either. I think the phone could feel more snappy in daily use. One UI is not to blame for this, and it seems to me that other factors like touch response latency appear to be at play.