Samsung Galaxy A7 (2017) review: Flagship features in an affordable package 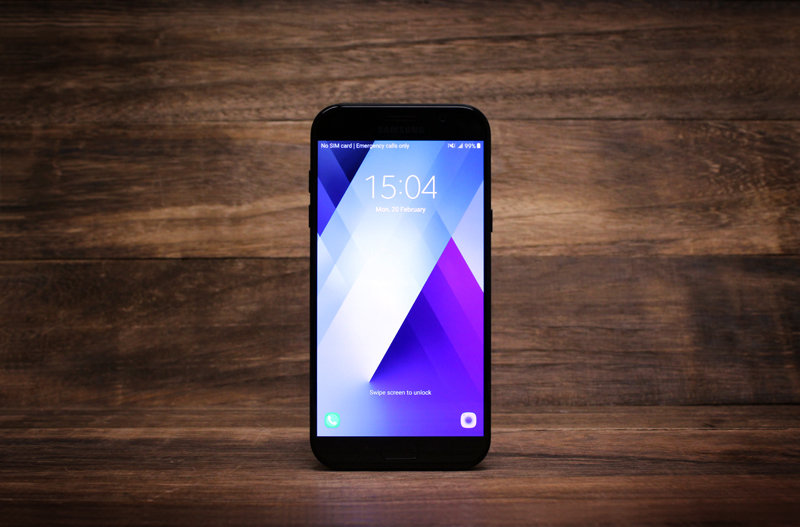 If you asked me for advice about buying a new Android smartphone today, I would tell you that the $600-800 price range is where you should start looking. At this price range, phones like the OnePlus 3T and Xiaomi Mi 5, offer the best bang for your buck, with powerful processors, Full HD displays, premium builds, and high quality rear and front cameras. But with so much competition in this tightly packed segment, what sets one phone apart from the rest?

Samsung thinks it has the answer with its 2017 A series smartphones that it launched in January. Available in two sizes: A7 (5.7-inch) and A5 (5.2-inch) and retailing now for S$648 and S$548 respectively, the freshly updated A range builds on last year's models, with premium metal and glass builds, and octa-core Samsung Exynos processors, but also adds some unique features taken directly from Samsung's flagship 'S' series: an always-on AMOLED display, and an IP68 water resistant build, making these phones the only ones in this price range to boast these features.

But are these additions enough to dethrone OnePlus as the king of the mid-range smartphone? Let's find out.

For this review we'll be looking at the A7 model. The A5 has exactly the same features and hardware, but with a smaller 5.2-inch display.

N.B. The 4.7-inch A3 is also part of the series, but it's not currently available in Singapore. 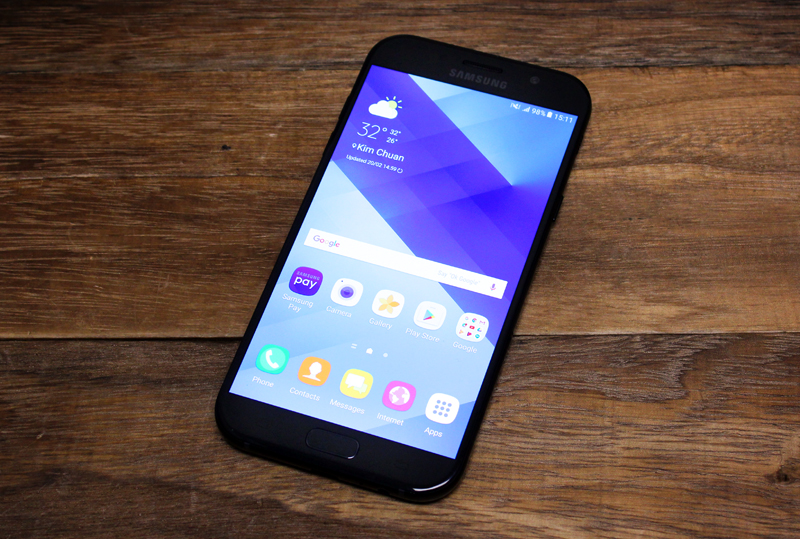 When the Galaxy A series debuted in 2015 it was the first full-metal set of smartphones Samsung had built, and arguably its best looking at that time. Two years later and the latest A series smartphones continue that legacy with a stunning combination of metal and glass that look and feel just as premium as Samsung's top of the line phones. In fact, the thin bezels, metal frame and curved glass back make the A5 and A7 look very similar to Samsung's Galaxy S7. And just like the S7, both the A5 and A7 are IP68 dust and water resistant, meaning they can survive underwater for 30 minutes at depths of up to 1.5m. 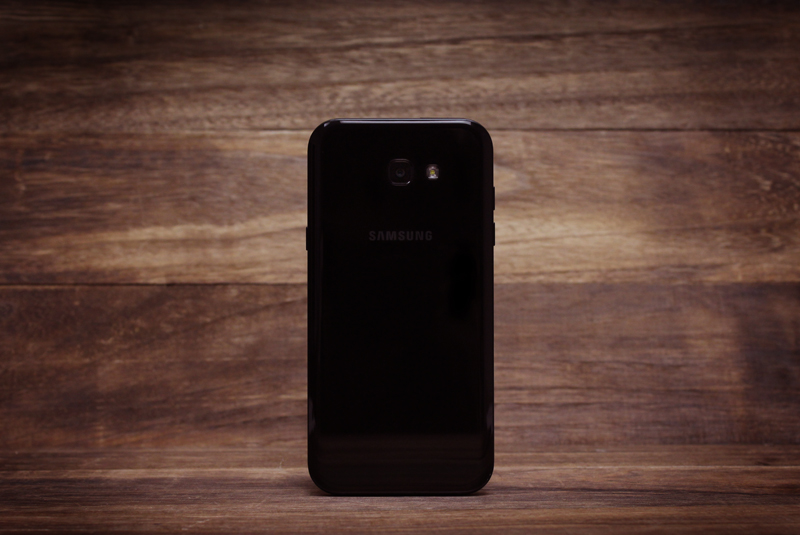 This year's A7 has a 5.7-inch display, making it slightly larger than last year's 5.5-inch model. With the demise of the Note7, this also makes the A7 the only 5.7-inch smartphone in Samsung's current lineup. Despite the phone's large size, the curved rear and fairly compact dimensions make it quite comfortable to hold.

Like the S7, below the display there's a physical home button that doubles as a fingerprint sensor. On either side of the home button are backlit navigation keys. Samsung has actually improved the fingerprint sensor since the S7. On the S7, you had to click the Home button once to wake the screen up, then keep your finger on the button to authenticate your fingerprint. For the A7, you just place your finger on the button and the phone wakes up and unlocks at the same time. It's a lot more convenient and saves a bit of time.

Another improvement on the S7's design is the speaker placement. On the S7 it was on the bottom edge, but on the A7 you'll find it on the right-side above the power button. Samsung first experimented with this speaker placement on the J7 Prime. The new speaker position may seem strange, but once you turn the phone into landscape orientation (which you're more likely to do when watching  video content) you'll see that it makes perfect sense. In this orientation, you can either position the speaker to fire down or up depending on your preference and there's no risk of covering it up by holding the sides like there was with the previous speaker position. 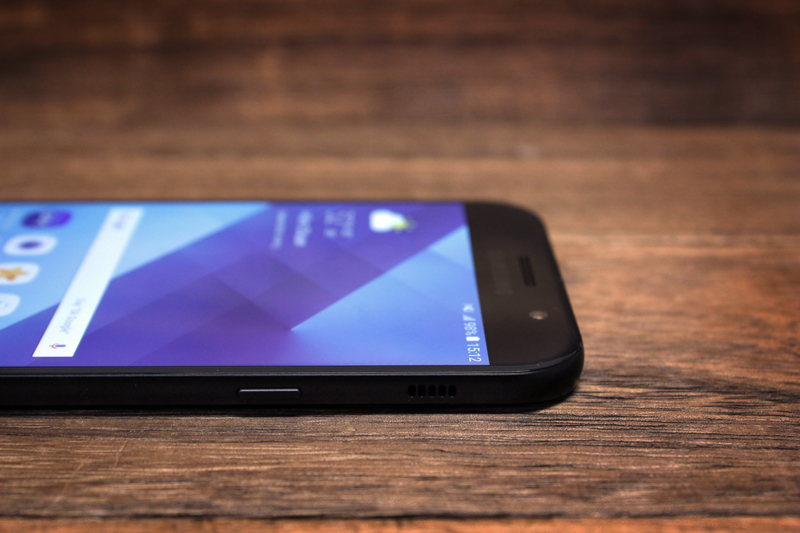 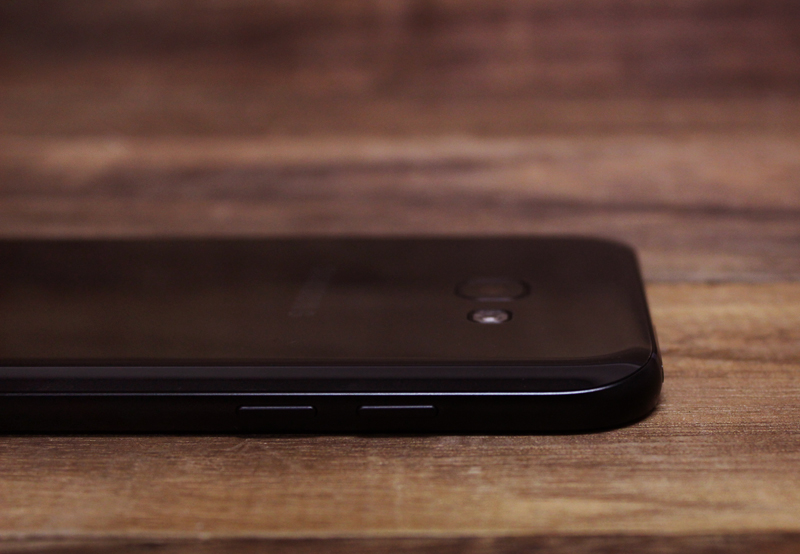 Like most of Samsung's phones, the power button is on the right side, and the two volume buttons are on the left side. We like this layout (it's also used by Apple) and find it to be the most ergonomic position to easily reach every button. Below the volume buttons is the first nano-SIM card tray, while on top there's another slot with a second nano-SIM tray and a dedicated microSD card slot that accepts cards up to 256GB in capacity, so you don't have to pick between dual SIM and expandable storage functionality.

On the bottom of the phone is a USB-C port and, thankfully, a 3.5mm headphone jack. 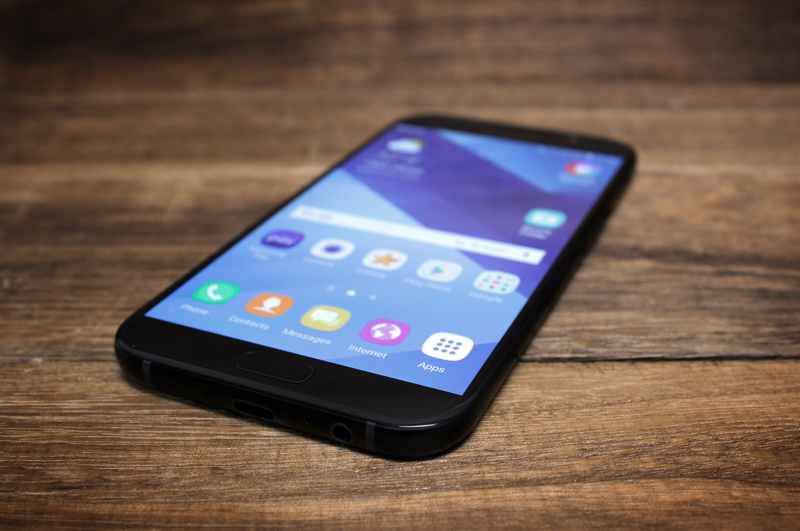 Both the A5 and A7 are available in three colors: Black Sky, Peach Cloud (pink), and Gold Sand. A Blue Mist color is also available, but as usual with blue colors, Samsung hasn't brought it to Singapore yet. Perhaps in the near future? 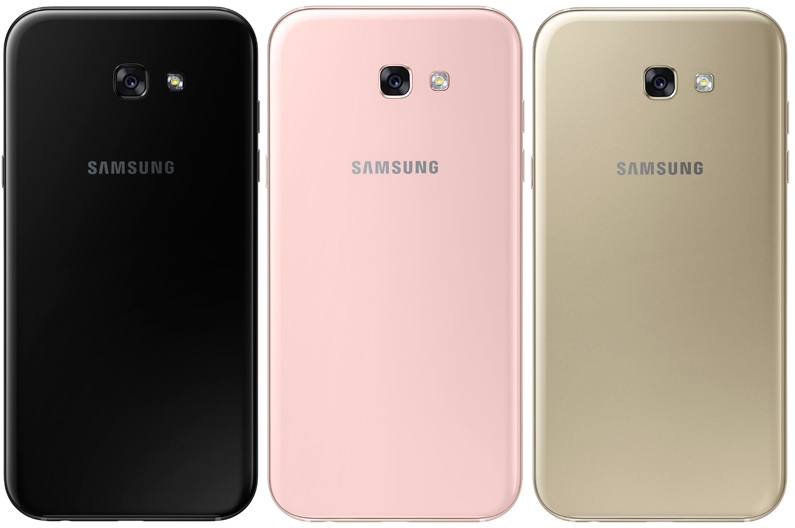