To recap, the Samsung Galaxy A52 5G comes with a Qualcomm Snapdragon 750G processor. It is one of the newer mid-range Qualcomm chips supporting 5G networks all within its main SoC, though the A52 5G in Singapore only supports sub-6GHz 5G networks, which is what our 5G infrastructure primarily utilises (Singtel does deploy mmWave in limited areas though). The processor itself comprises six 2.2GHz cores and twin 1.8GHz cores. Given that the Galaxy A52 5G is one of the very few new mid-range phones that we can get our hands on this year, we can only benchmark it against other mid-range phones released late last year. 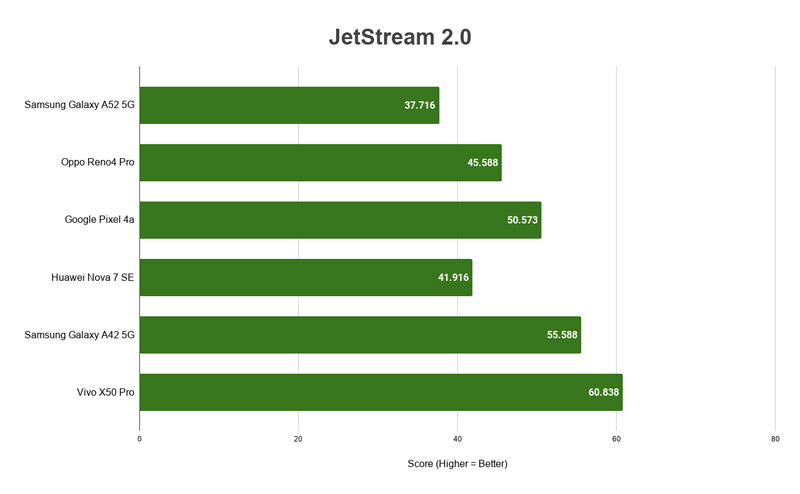 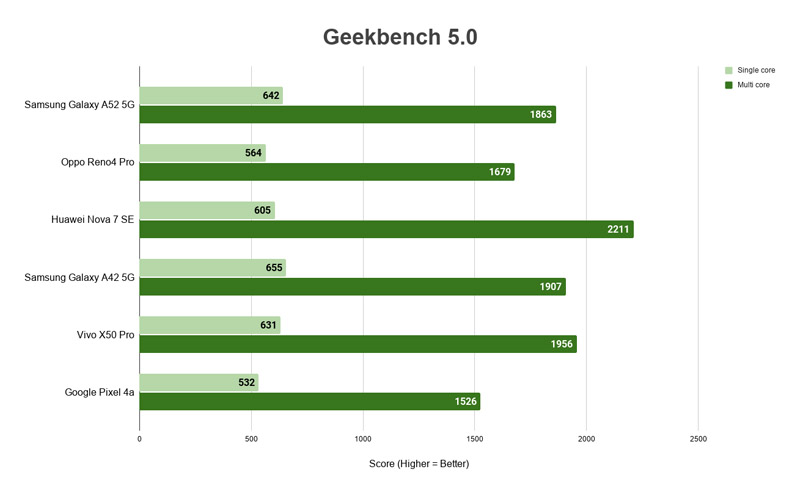 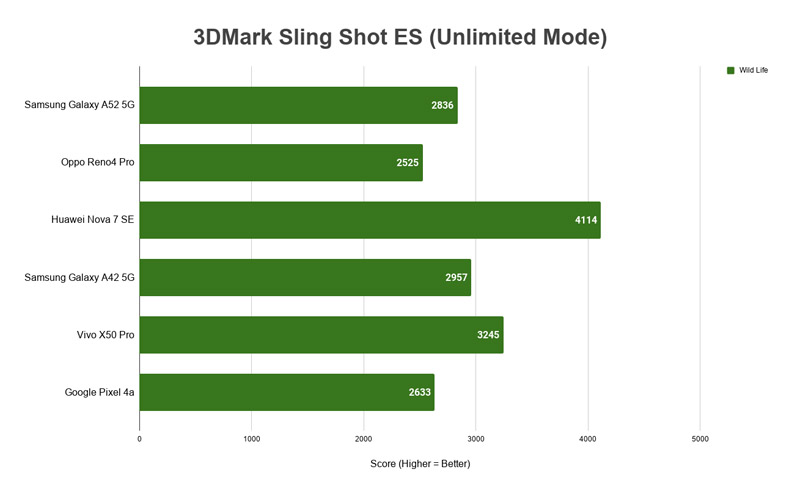 The Snapdragon 750G in the Galaxy A52 5G performs rather decently in the benchmarks, slightly exceeding Pixel 4a’s Snapdragon 730G, the chip it was supposed to succeed. It is expectedly almost on par with its Galaxy A42 5G cousin. The benchmarks also translate well to real-life experience as the usage is so far still smooth. Most games perform decently as well. 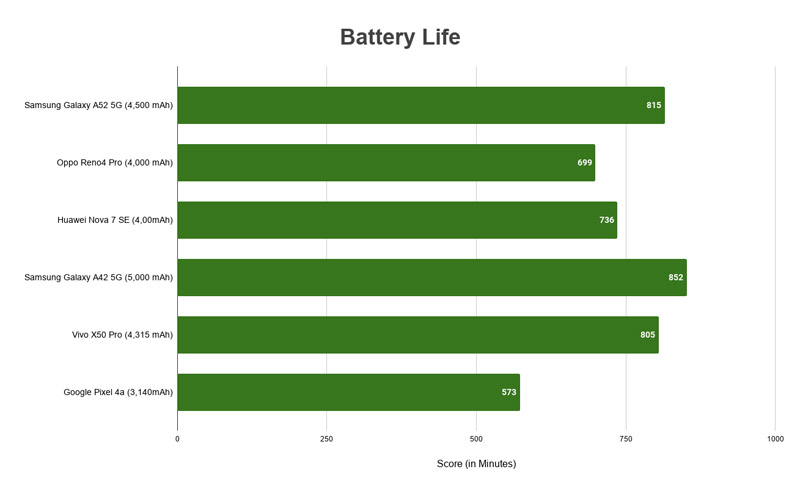 Samsung Galaxy A52 5G yields a battery life of over 13 hours in our tests, which is the longest amongst other devices tested in its class - other than its A42 cousin, which is endowed with a slightly larger battery. This translates to real-life usage as well, where I don’t find the need to reach out for the charger at the end of the day (though it’s a good practice anyway).

As iterated earlier, the Galaxy A52 5G supports 25W fast charging, though the charger that comes with the packaging is the normal Samsung 15W fast charger. While it is a pity that Samsung chose not to include a 25W charger inside the box, we are happy to see they are still including capable chargers for mid-range phones. The A52 does not support wireless charging, which is par for the course for phones priced at its tier.

While I didn't have the official 25W Samsung charger at hand, I do have a 100W GaN multiport USB-C charger, in which one of the ports supports USB PPS charging. Using that port, I found the Samsung Galaxy A52 5G charged at “Super fast charging” mode, and it managed to charge the phone from 56% to 90% in just 25 minutes. 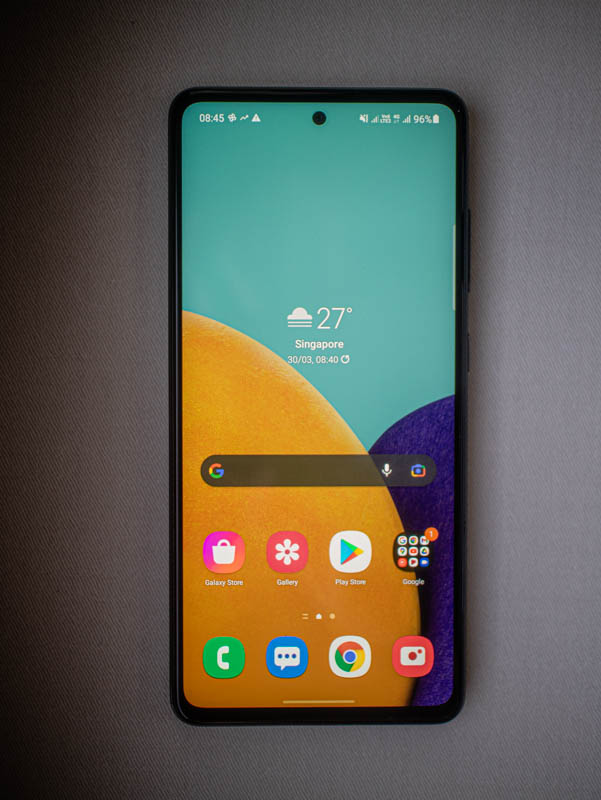 Samsung’s mid-range phones have been a hit and miss affair in the past, but they have since risen to the competition, starting from last year’s A-series. This year, the Samsung Galaxy A52 5G turns up the heat further by incorporating features normally seen on more expensive phones like optical image stabilisation (OIS) for better photo taking and even being able to weather the elements with IP67 water and dust resistance rating. Truly, Samsung’s mid-range has finally become a credible recommendation and not just devices put out by the big blue to fill in different price bins without a thought towards consumer appeal.

It can be argued by some that water resistance is a useless feature since electronics don’t play well with liquids in the first place. However, the fact remains that it is a practical unsung hero when certain scenarios call for it, like being caught in heavy rain, or you really want to bring the phone by the poolside and not worry about it being drenched or splashed upon accidentally.

The Galaxy A52’s camera array, though modest compared to the likes of a Galaxy S21 that costs at least twice as much, still performs rather capably as seen in our unforgiving test shots (no thanks to the weather). If you don’t really care for zoom and other advanced use cases, the camera array on the Galaxy A52 easily fulfils most everyday usage needs. Don’t forget that it also has an ultrawide angle lens to capture those trickier group shots or an expansive landscape scene.

Apart from these two upgrades for the Samsung A5 series (water resistance and a better camera), other notable enhancements, such as Dolby Atmos audio processing (best used with headphones), 25W fast charging, and speedy 120Hz FHD display, would easily appeal to most users looking for a modern daily driver that doesn’t leave out features that were once the domain of flagship phones. The Galaxy A52 also checks off other practical asks such as a decent 128GB internal storage with expandable storage capability, 3.5mm audio jack and FM radio.

Gaming performance may not rival top-tier phones, but since the phone can play games like Genshin Impact and MLBB comfortably, that level of performance would please most users. Perhaps the only minor disappointment is the lack of a wireless charging option, though that may not be what users are necessarily looking for since such wireless chargers are expensive and there is some efficiency loss compared to wired charging. In fact, the only reason anyone might ask for it is because the phone comes with such a capable feature set that you might associate it with a high-end phone than a mid-range one.

What's even more compelling is that all of what the phone offers come at a very modest suggested retail price of just S$548 (for 8GB RAM and 128 GB storage), or if you prefer more onboard storage, you can opt for the 256GB variant for S$648. Only those who have little time to housekeep content on their phone or install way too many apps and download content will require the higher capacity version. For everyone else, you could easily get by with the much more palatable 128GB edition and there's still microSD expansion if you need more storage. If you're keen to purchase it online, you can make the jump to Samsung's Online Store, Samsung LazMall Store or the Samsung Shopee Mall.

With so much to offer at under $550, phones like the Galaxy A52 and its competitors might start to eat into the appeal that flagship phones once held a strong grip. Is this the end of ultra-expensive phones? Or is this just the beginning as top-end phone models start to explore the realms of multi-displays, foldable display, rollable display and other such leading-edge experiences? We tend to think there’s a push for the latter as more brands are debuting showcase devices that we may one day pine for. Till then, the mainstream audience stands to benefit from the continual process and technological improvements to bring devices like the Samsung Galaxy A52 at ever more palatable price points.