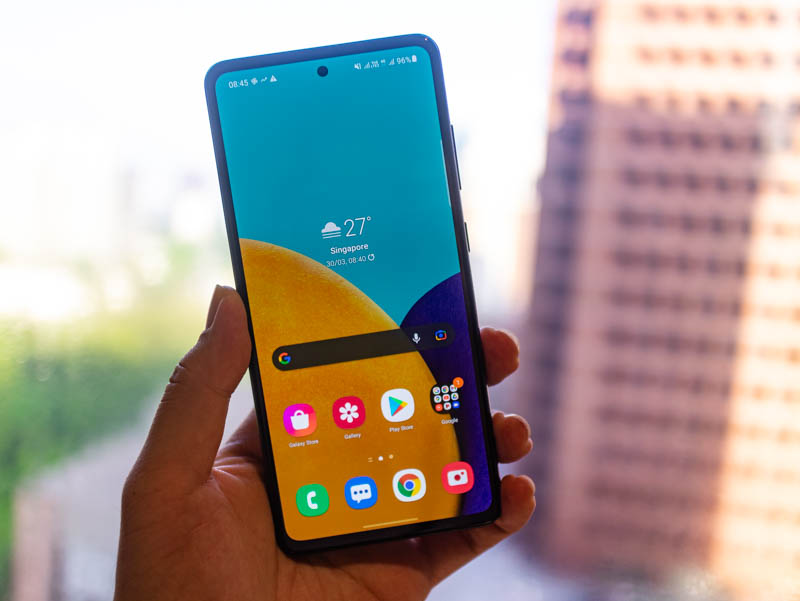 Last year, we saw intense competition in the mid-range smartphone market, and it’s now finally possible to have a very respectable phone in the S$500 price point and not feel left out for not splurging twice or thrice that amount for a high-end phone. We see this trend will be a mainstay for 2021 as phone brands hailing from China will continue to put pressure on global offerings from Apple and Samsung and if it wasn’t for their persistence, we probably won’t see a capable mid-range offering from either of these two brands.

Before any of the other brands get a chance to push their offerings to retail, Samsung has aggressively launched three new Galaxy A series mid-range phones: the A72, A52, and A32. Sadly, for our local market, there are no immediate plans to bring in the A72, and since Singapore is actively expanding its 5G network, Samsung has opted to bring in only the 5G variants of the A52 and A32 to our sunny island. I managed to get my hands on the Galaxy A52 5G on its launch day, and this will be the focus of my review.

Naturally, the A52 is an immediate successor of the A51 released last year, and the naming convention puts the A52 plainly right in the middle of the spectrum of mid-range phones released by Samsung.

In spite of that, the Samsung Galaxy A52 5G is a tremendous improvement over its predecessor, in which the Qualcomm Snapdragon 750G chip within supports 5G networks natively. Also, the phone’s rear camera has OIS, and the screen supports 120 Hz refresh rate. Above all, it is waterproof.

Wait, didn’t Samsung launch A42 just a few months back with the same processor?

Back in November 2020, Samsung launched the A42 5G. While the raw specs of the A42 are very similar to A52, the headliner differences are the waterproofing, better camera and screen. Having said that, we are curious to see whether there are any differences between the performance of A42 and A52, and that will be explored in the benchmarks section.

Now that we’ve figured out where the new Galaxy A52 5G is in the pecking order, let’s explore the phone in greater detail, starting with first impressions - its design. At the front, it would seem that Samsung has kept its design language for its A5- series of phones, with the same hole-punch display that facilitates the front camera at the top of the screen, right smack in the center. On its back though, while Samsung is still using plastic materials, it is now matte haze finish instead of glossy, thus it feels and looks much better in hand compared to its predecessors. The sides are also dramatically less curved and it seems that Samsung has infused some design elements of the Galaxy S21 into A52. The same goes for the camera bump; while the bump is still present, the design looks decidedly less “awkward” than the A51 and has more in common to the S21 range. 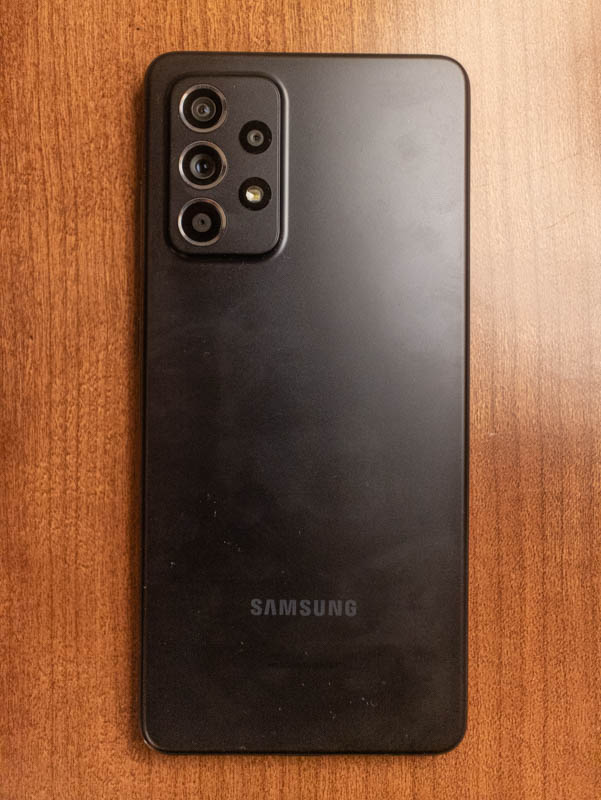 Partly because of its body construct, even though it weighs 189g - slightly heavier than the A51 - it feels comfortable in hand - not too heavy, but it feels just about right with a comfortable amount of heft without feeling any flimsiness that you might expect of this class of phones. The phone is a tad thicker than A51 at 8.4mm. Perhaps all this ‘upsizing’ is partly due to the incorporating a slightly bigger battery (4500mAh), though oddly, it’s not as large as the earlier released Galaxy A42.

On top of that, while A52 still retains the 6.5-inch display form factor with the same Super AMOLED Infinity-O display and resolution as A51 (1,080 x 2,400 pixels), the display now comes with a 120Hz refresh rate, which renders the user experience buttery smooth, in spite of it being a mid-range device. The display also incorporates an under-display fingerprint sensor, a standard thoroughfare amongst most respectable mid-range devices these days and flagships, and is decently sensitive enough; I managed to unlock the phone without fuss most of the time and this is definitely a sign of maturity for in-display fingerprint sensors. Would I perhaps prefer a fingerprint sensor incorporated in the power button as opposed to this implementation? Perhaps, if it also means the cost of the phone goes down somewhat, but otherwise, I can definitely live with this.

Besides that, there are not many other design changes between the A51 and A52. The volume rocker and the power button are positioned on the right side once again. Also found at the bottom side is a 3.5mm headphone jack, a rarity in flagship phones in this decade. The Dual-SIM card slot is found at the top, which also supports single-SIM and expandable microSD card storage (yet another rarity these days). Expectedly, the USB-C port is placed at the bottom side of the phone.

Also at the bottom side is a speaker grill, which is part of the stereo sound system in the A52, with the other speaker being the loudspeaker at the top of the screen.  The phone supports Dolby Atmos surround sound upmixing and decoding, which was a flagship feature but slowly filtering down as a standard in some mid-range phones. With that, watching either the Mandalorian or the Falcon and Winter Soldier yields a pleasing aural experience - especially on headphones. Audio over the speaker is decent for a phone, but nothing out of the expected. Oh and if your eyes are not free enough to enjoy your favourite streaming shows, you might be delighted to know that the A52 has FM radio support - an understated feature that’s also fast becoming a thing of the past.

What about the Galaxy A52 package itself? You’ll be delighted to know that unlike most flagship phones, the Samsung Galaxy A52 package actually comes with a 15W charger (though the phone can actually support 25W fast charging). This is actually a good move considering most people purchasing this tier (upgrading from older mid-range devices) would likely not have a modern fast charging adapter since their old phones wouldn’t have supported it anyway. Kudos to Samsung.

Rejoice! The Samsung Galaxy A52 is IP67 rated. While it is now taken for granted that flagship phones feature a certain level of water resistance, it is a rarity in the mid-tier and isn't featured in any Samsung mid-range phone since the 2017 A series. The launch of A52 5G dethrones the Apple iPhone SE as the cheapest waterproof phone one can get in the local market. 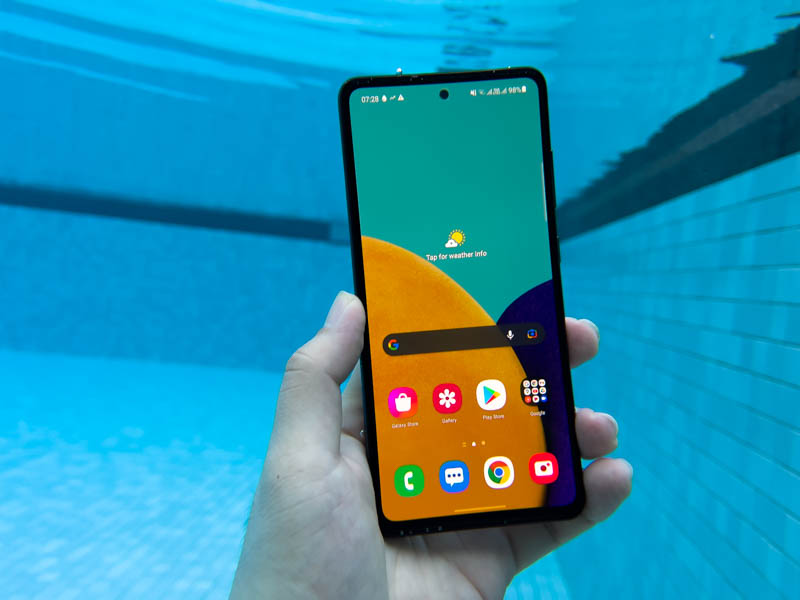 The Samsung A52 5G is preloaded with Android 11. Overlaying it is Samsung One UI 3. My colleague has briefly covered it in his Galaxy S21 review. Overall, the One UI 3 is aesthetically pleasing and is one of the better OEM skins in the Android market.