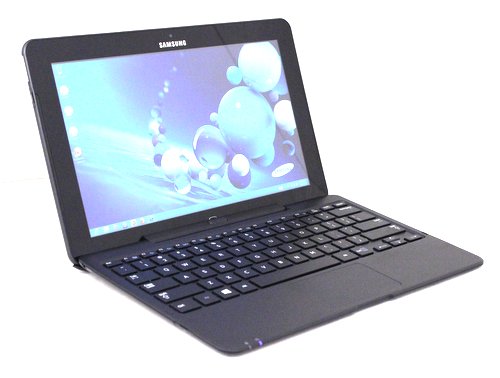 Out of all the Windows 8 Ultrabooks we’ve seen thus far, only the 11.6-inch Samsung ATIV Smart PC Pro has the ability to become a true tablet without the excess baggage of a keyboard. Together with a keyboard dock, it has a clamshell form factor that puts it firmly in the hybrid notebook category. The difference here is that it consists of two parts, unlike the the convertible machines from other manufacturers such as the Sony Vaio Duo 11 and Lenovo Yoga 11.

From our tests, we find that the 0.88kg ATIV Pro's ability to be removed from its dock improves its physical portability and battery life significantly. That's because the keyboard dock adds an additional  0.72kg, and it also uses up quite a bit of battery. On the plus side, you can always just pair it with a thin Bluetooth keyboard instead of using the dock. However, that means losing a couple of USB ports and still forking out more cash for these slim accessories (Mircosoft's version comes to mind). Take note that you cannot purchase the ATIV Pro unit without the keyboard dock.

Once you factor in the combination of the tablet and dock to form a clamshell Ultrabook, its physical dimensions (up to a chunky 22mm thick) and 1.6kg weight are however not quite appealing against the usual Ultrabooks. As such, the ATIV Pro's strengths won't appeal much if you intend to use it in the notebook form factor most of the time. Instead, potential buyers would be best served if their usage style has a good mix of tablet and notebook form factor use on the same device.

As for raw performance, its Ultrabook components helps it to keep up with competing Ultrabooks in the market, but just barely. What's interesting is its good battery life, despite its bright full HD IPS panel (rated for 400 nits at maximum brightness). Samsung has certainly tweaked this mobile device for portability and it shows in our tests.

What's special about the ATIV Pro is its stylus that slots in neatly into the side of the tablet. This stylus is powered by Wacom technology, which makes it smooth and responsive. However, we'd advise against using the Samsung proprietary S-Note app because the app is resource heavy, thus affecting the responsiveness of the stylus. Instead, we've used some of the native inking features within Windows 8 and stylus friendly apps from the Windows Store, which posed no such issues and lent an extra dimension of productivity and creativity that's not available in most other Ultrabooks or convertible Ultrabooks.

Another advantage (or useless feature, depending on who you ask), is the 5MP rear-facing camera. It’s not meant for conventional usage, but it’s good to know that it’s there when you need to take an impromptu photo while using the tablet.

The ATIV Pro is decked with premium features and is marketed as such, but unfortunately the ATIV Pro’s build quality is a little disappointing. It’s mostly made of plastic to help keep its mass in check, but it also introduces some flex on the back of the display and keyboard. The plastic clickable trackpad on the keyboard too doesn’t feel as good as the premium glass clickpads on other Ultrabooks for it feels flimsy and stiffness is unevenly spread.

We feel that for an Ultrabook, the Samsung ATIV Pro Smart PC Pro has a good arrangement between power, features and battery life. Unfortunately, its recommended retail price of S$2199 is a tad too high to be instantly appealing and with some of the mentioned downsides. If you've always wanted the portability of a tablet (albeit a slightly large one), but the processing prowess of an Ultrabook, the ATIV Pro is one of the rare few devices that offers this unique blend of features. Essentially, an Ultrabook that allows you to tear away the keyboard. Not to forget is its competent stylus input, which further makes this device stand out.

The only other machine with those specs now is the Microsoft Surface Pro which is only for sale in the USA. For other alternatives, there is always the Acer Iconia W700 which is also a tablet with Ultrabooks specs. The Iconia is more affordable at S$1498, but it doesn't come with a dock, nor a Wacom technology driven digitizer input.