As far as hybrid PCs go, the Samsung ATIV Smart PC Pro could very well be the most powerful hybrid PC in the Singapore market at the time of testing this product. The only comparable one would be the Microsoft Surface Pro, which isn’t available locally. In terms of specifications, the ATIV PC Pro is decked out well enough to compete with any other Ultrabook of its class.

It has an Intel consumer-ultra-low-voltage (CULV) Ivy Bridge processor, and an SSD, both of which are found on premium Ultrabooks. To provide a gauge of its performance, we’ve also gotten results from some of the best Windows 8 Ultrabooks out in the market right now. Besides the ATIV PC Pro, only the Acer Aspire S7 is not a convertible or hybrid Ultrabook.

PC Mark 7 is a benchmark that tests all aspects of a machine. It stresses vital components like the CPU, GPU and storage to give a score depending on how the machine performs collectively. From the chart, you can see that there's a difference in scores between the Samsung ATIV Pro and other machines. It’s about 15% behind most of the other machines that score around the 4500 mark. It seems that the SSD within the Samsung machine isn't quite in the same ballpark as the other machines, thus pulling down the scores across the board.

Thankfully in actual usage, most users wouldn’t be able to discern the difference in performance between the tested machines unless of course you literally hold out a stop watch to time some tasks. 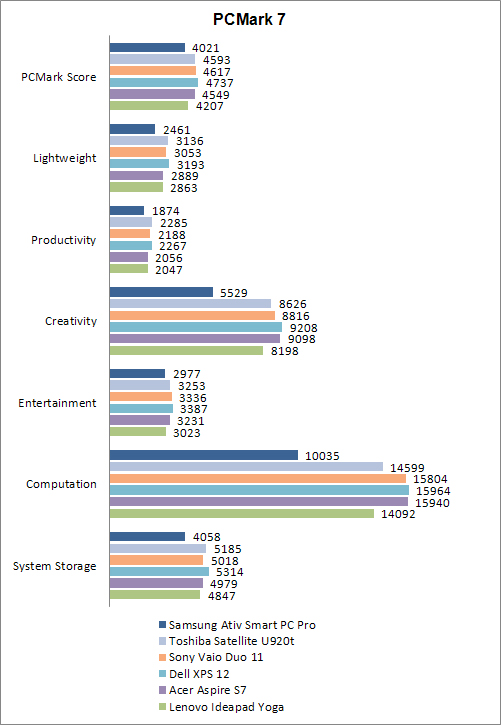 Both 3DMark 11 and Far Cry 2 are popular GPU benchmarking tools and we use them to asses the notebook/tablet's 3D rendering capabilities. Unfortunately, results mirror that of its less than flattering PC Mark 7 showing. Even for Far Cry 2, a relatively old PC game used to extract frame rates, its test outcome is about 10 to 15% worse than the expected norm.

In actual usage however, the performance differences between the ATIV Pro and other notebooks are quite insignificant, because Ultrabooks aren't meant for gaming and it shows from the results below. However, do take note that while the Samsung ATIV Smart PC Pro isn’t able to handle intensive games, its GPU is more than sufficient to tackle the daily grind of rendering operating system animations, rendering websites and basic photo editing without any problems whatsoever. The discrepancy is only pronounced when peering under the microscope such as these benchmarking tools. 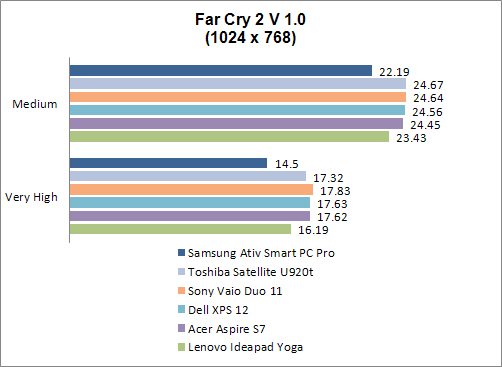