Appealing To Your Senses

Samsung is one of the pioneers to kickstart the Smart TV campaign during a time when most televisions were 'dumb' and happy to stay offline. With the arrival of their 2012's series of televisions, it is undeniable that the South Korean firm has invested a fair bit of their R&D efforts to spice up their almost predictable Smart TV routine, and no other model that marks this change better than the flagship 55-inch ES8000 LED TV, introduced only two months ago. Let's discuss its cosmetics later, but more significant aspects will have to be its new set of interactive interfaces, in the form of gesture controls, voice triggers, and face recognition. Honestly, we do believe that a Smart TV's usability has the power to make or break the user experience. After we're done with this review, however, we'll be in a better position to impart if Samsung's approach is truly a practical effort, or simply an expensive gimmick, so to speak. 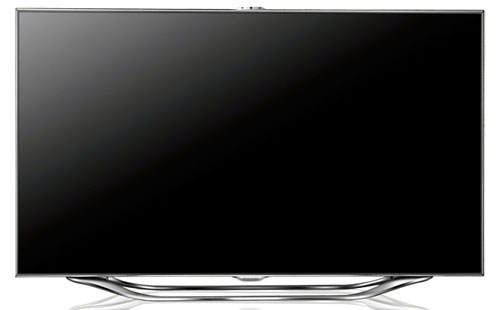 The ES8000 is an edge-lit LED model at heart. And it's powered by a dual-core processor although Samsung did not specify if it applies to the video processor or otherwise. The stylish LCD display features Samsung's Micro Dimming Ultimate, a 'cluster backlighting' technology with relatively more dimming areas than Micro Dimming Pro used by the ES7500. The ES7500 follows just behind the ES8000, but with less spectacular qualities like a slower Clear Motion Rate of 600Hz for example. Having dynamic backlighting on the ES8000 is better than not having any, however, this feature still pales in comparison to dedicated local dimming facilities on a full-array display for instance. Moving on, the Koreans also have plans to introduce a Smart Evolution Kit - a thumbdrive-like contraption which enables you to upgrade the TV's performance capabilities like "transforming your TV's dual-core CPU to faster quad-core technology" as stated on Samsung's website. Sounds fantastic? You bet. However, this feature won't be available till 2013. That said, let's take a closer look at what the ES8000 offers today in the next few pages.

Write a Review
Compare This | Specifications
Stylish design
Superb clarity
Brilliant HD performance
Suffers from minor clouding issues
SD and 3D delivery could be better
Our articles may contain affiliate links. If you buy through these links, we may earn a small commission.
Sponsored Links