Note: This article was first published on 28th November 2020. 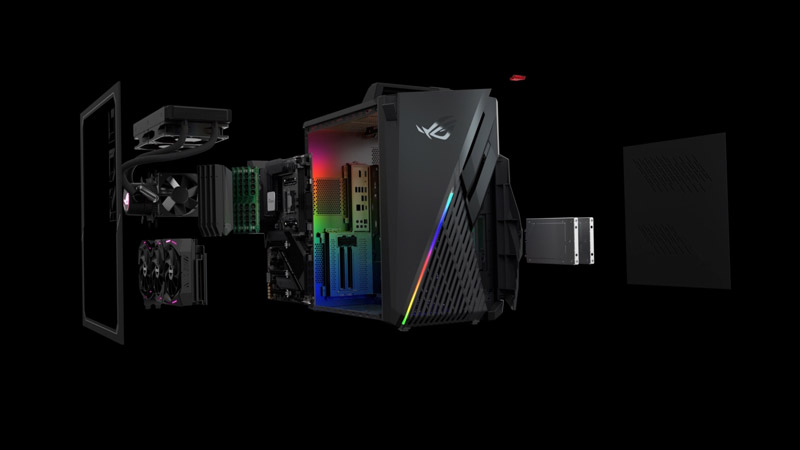 If you are a hardcore PC gamer, let’s face it: only a PC gaming desktop provides the firepower necessary for modern triple-A titles. And it also goes without saying that only a gaming desktop allows you to customise an RGB setup that best suits your personality. A gaming notebook just can't project the same presence nor have the cooling capacity to really deliver consistent high-end gaming performance over a prolonged gaming session.

So, there are two ways to get your own gaming desktop. One obvious route is to do a DIY custom-built system, where you have free reign in deciding what type of casing, processor, RAM, SSD storage size and even the graphics card that you want and within your budget. The little downside here is that you need to be relatively technically knowledgeable with PC components – knowing the differences between an Intel or AMD processor, or if 16GB of memory is sufficient for instance. The other, and more convenient method is to simply buy a pre-built PC, like the ASUS ROG Strix GT35 machine here. 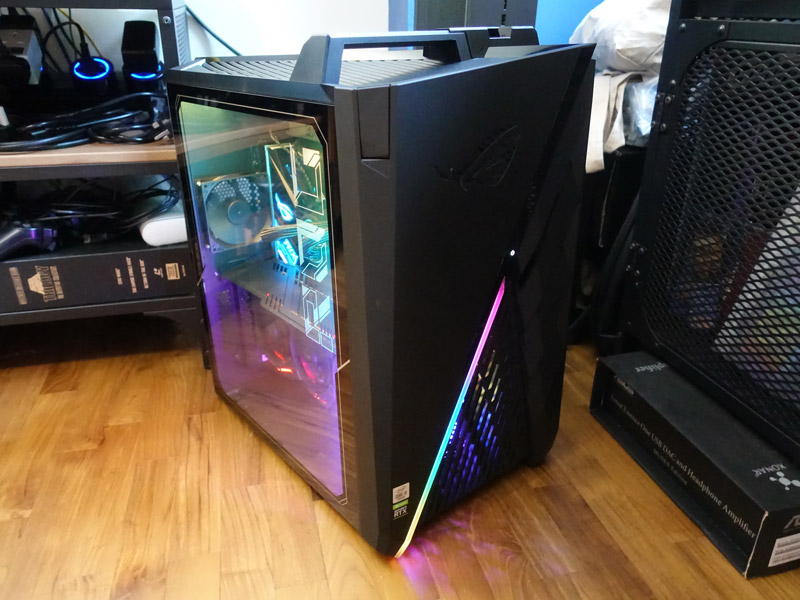 ASUS claims on its website that the GT35 is built with esports in mind and comes with two different (albeit just slightly) pre-built configurations available for purchase. The GT35 (G35CZ) system that I tested comes with the following key specifications:

When you think of esports games, titles like Overwatch, Valorant or League of Legends come to mind and you don’t necessarily need a top-of-the-line CPU or GPU to run them smoothly. So, the i9-10900KF processor and RTX 2080 Ti graphics card feels like a tad overkill for the targeted gamer that ASUS is pitching this system to. That said, with specs like that the GT35 can run most modern games easily at 1440p and even 4K.

The elephant in the room is, of course, being that the GT35 isn’t paired with the newer RTX 3080 graphics cards. It’s worth remembering that the system was launched before NVIDIA’s latest RTX 30 Series so the RTX 2080 Ti back then was the best graphics card available for it. Yet it is also interesting to note that even at this point of writing, the GT35 is only available with the RTX 2080 Ti or RTX 2080 Super cards with nary a price drop. But more on this later. In the meantime, let us judge the GT35 based on its own merits. 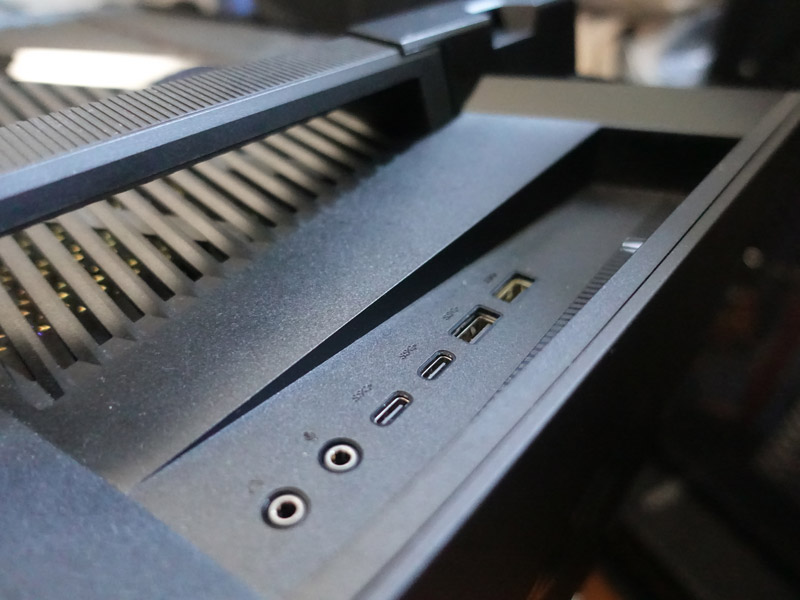 The ROG Strix GT35’s casing is a custom ATX, cooling-focused multi-chambered chassis design with a liquid cooling system. The case itself measures 27.9 x 43.3 x 50.1cm and comes with the usual ports and connectivity at the front including two USB 3.2 Type-A, two USB 3.2 Type-C, mic-in and headphone-out. There are also widened vents on the front and top panels that stealthily direct more cool air through to the internal AIO liquid cooling system, but there are no dust filters to protect dust and other small dirt from being sucked in. 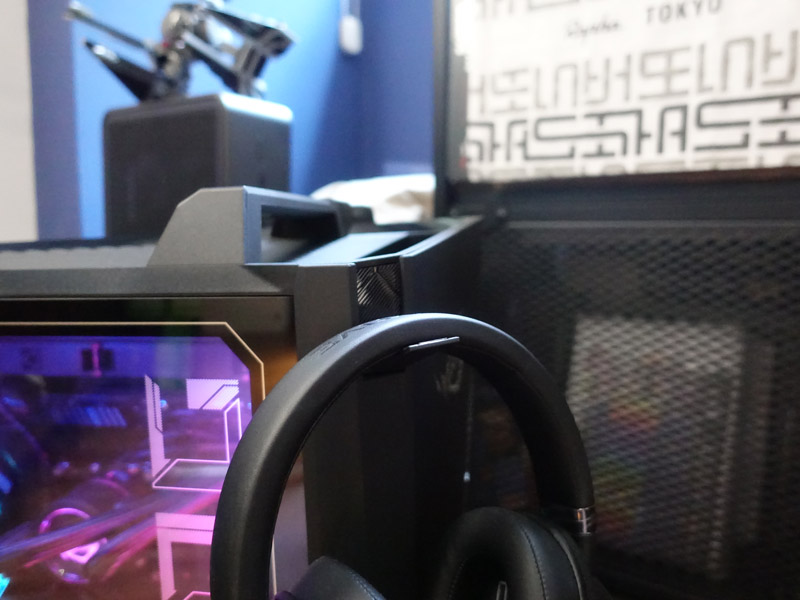 A built-in handle allows for easy portability, but at 15kg, I’m sure that’s not something you’d want to be doing often. For casters or gamers who prefers to game on the quiet, the casing also comes with a headphone holder, which can be folded and magnetically locked when not in use. The casing does remind me a little of the popular Lian-Li O-11 ATX casing, where the PSU is placed on the side behind the motherboard – rather than the traditional bottom or top. 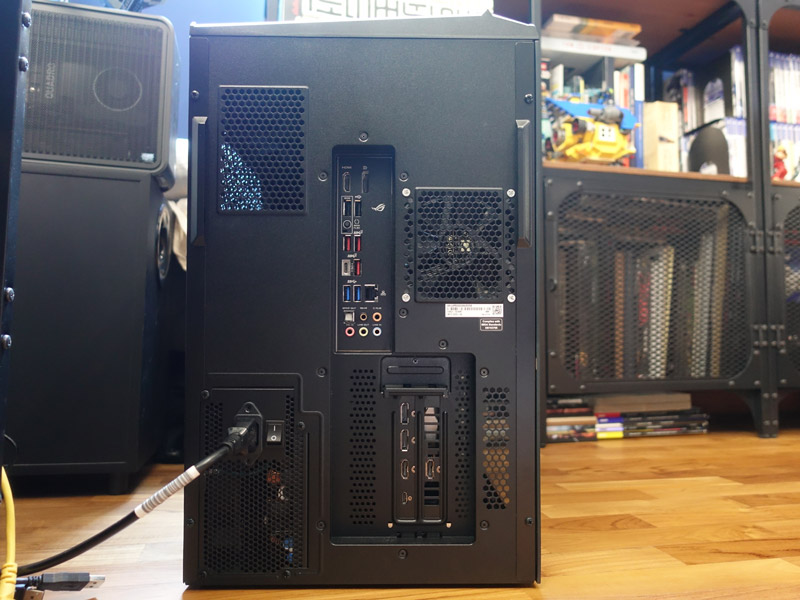 The rear ports are pretty vanilla fare, courtesy of the ROG Strix Z490-F gaming motherboard. What’s interesting though, is that the casing only supports a vertical placement of the ROG Strix RTX 2080 Ti graphics card, and if you look even closer you’d realise that it in fact, only can support one graphics card that does not occupy more than two PCIe slots. That’s not only an awful waste of space inside the casing, but it also limits off the occasional but rare graphics cards that occupies three PCIe slots (e.g., NVIDIA’s GeForce RTX 3090 Founders Edition). 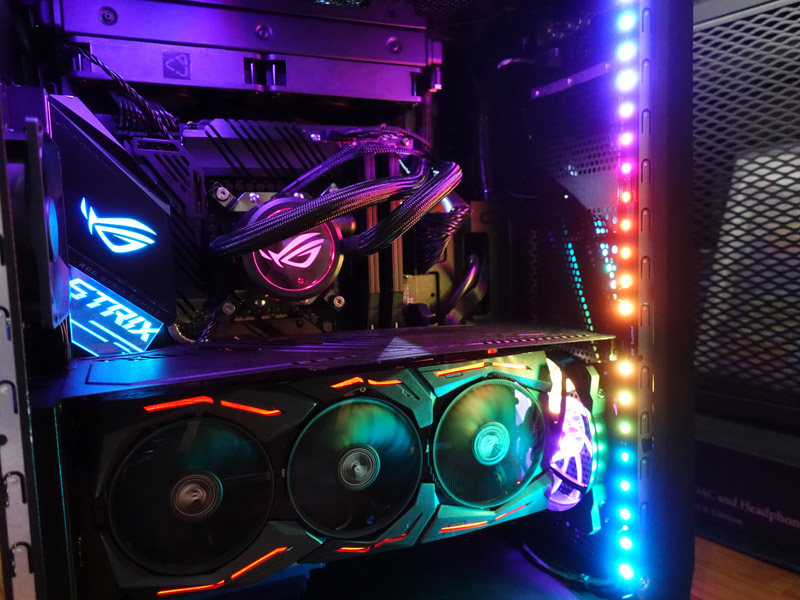 Oh, and it will not be an ROG without the obligatory RGB lightings and the GT35 features them impressively on the casing’s front panel and just behind it. I’m not one for RGB overkill, but I think it’s a missed opportunity not to have included RGB options for the fans placed at the rear exhaust and the AIO liquid cooling radiator. The RAM modules too. 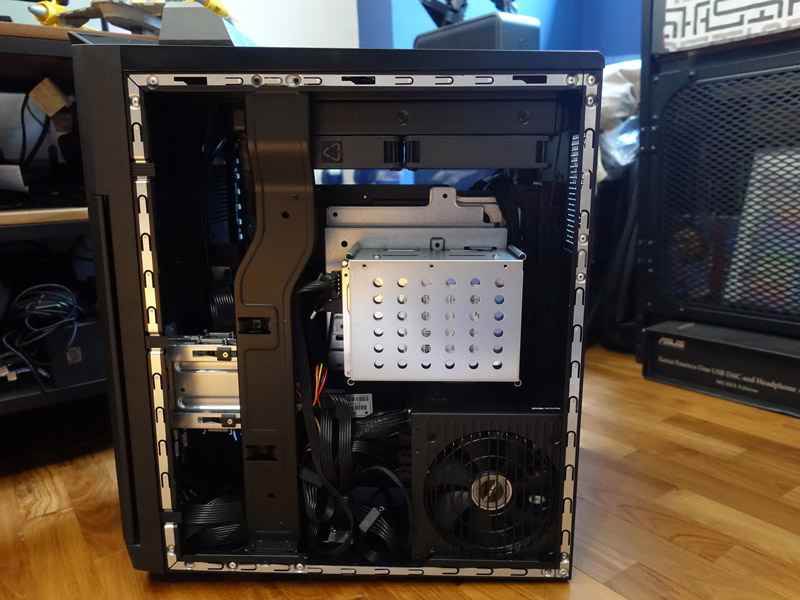 Overall, I think the GT35 chassis will find a niche among gamers but for PC enthusiasts it’s a missed opportunity to get some goodwill and love – many brands seem to forget that PC enthusiasts make for good influencers among their peers. Apart from the impracticality of supporting just one PCIe card (basically just one graphics card and nothing else), limiting future upgrade options is another concern especially for a high-end non-compact gaming system.

A system with an RTX 2080 Ti card may seem a little outdated too, don't forget there are supply issues with the new graphics cards that have prevented ASUS from offering a refreshed SKU. Despite the concern, the card still has a fair bit of performance mileage left in its tank. Let’s take look at how this GT35 performs.