Roccat Tyon: So many buttons!

Roccat Tyon review: So many buttons! 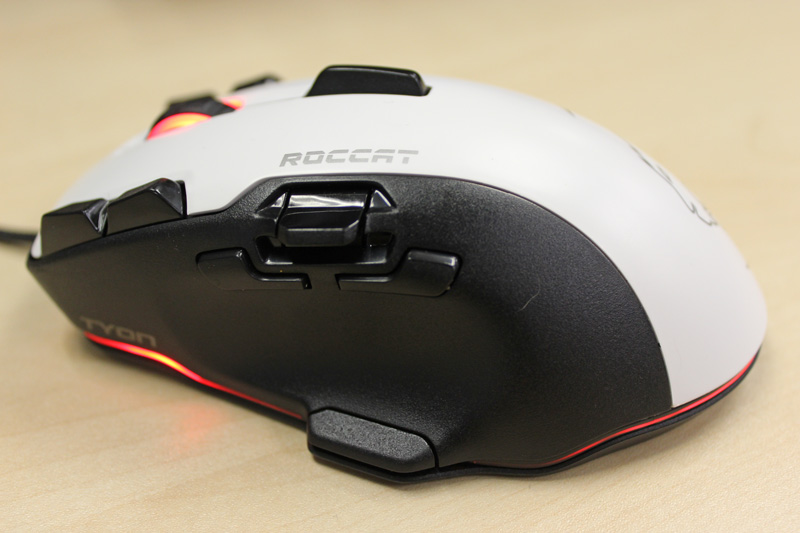 Roccat's mice aren't for the normal person. As a company, Roccat has made a name for themselves by delivering quality high end gaming gear for the hardcore gamer. Be it a mouse or a keyboard, if it has the Roccat name, you're getting some good stuff. The Tyon is the latest in Roccat's line of mice and from what we've seen, comfortably shoulders the burden of being the new kid on the block remarkably well. 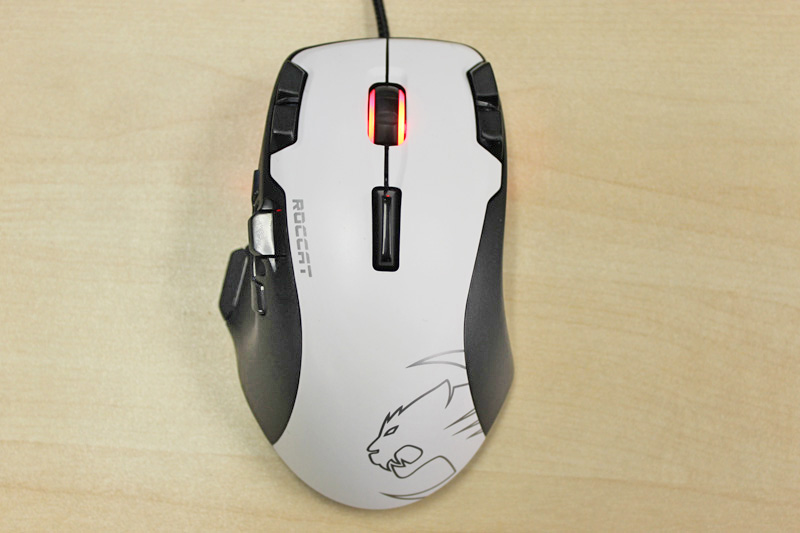 With it's much touted 14-button design, the Roccat Tyon is shamelessly extravagant. Nobody's going to be buying the Tyon just to do Excel spreadsheets is what we're saying. We can't really blame Roccat for trying to stuff as many buttons as they can on the Tyon, as gamers all know how troublesome it is to have to look down at the keyboard when you need to hit a certain key that's not easily accessible. That's what the Tyon is built for. If everything else is within easy reach of the fingers, there's no reason for your eyes to be away from the screen, right? Of course, it goes without saying that the gamer that'll get the most mileage out of the Tyon is the MMO gamer. With so many buttons, the Tyon is a godsend to MMO players who want everything easily accessible without resorting to keyboard macros or shortcuts.

The Roccat Tyon is a USB 2.0 wired mouse and comes with a 1.8 meter braided cable. Since you can't detach the cable, users who don't need the extra length have no choice but to put up with it. The mouse isn't weighted, which means there's no way to increase its default weight. It shouldn't be an issue though, as the Roccat Tyon weighs a comfortable 126g, which is comparable to other gaming mice like ASUS ROG Gladius. Its 14 x 4 x 8cm size makes it ideal for people with average sized hands. The main mouse buttons register presses up to near the Dorsal Fin switch (the button below the scroll wheel), so even those with smaller hands shouldn't have much of an issue using the mouse.

The Roccat Tyon has a 200 - 8200 DPI Pro Aim (R3) laser sensor, so you can adjust your favorite sensitivity setting. If the default presets aren't to your liking, you can always customize them until they suit your playing style. The Roccat Tyon also boasts a 1000Hz polling rate. Polling rate determines how often the mouse sends positional data to the computer, so the higher the polling rate the more precise your inputs. Conventional USB mice only have a polling rate of 125Hz, which is about 8 milliseconds in real time. What the increased polling rate in the Tyon means is that it's more accurate since the mouse regularly sends updates to the PC.

In its guts, the Roccat Tyon also utilizes a 72MHz Turbo Core V2 32-bit ARM based MCU to help it process information. There's also 576KB of on-board memory for saving profiles and storage.

Made of a matte plastic material, the Tyon eschews conventional norms by not having rubber grips of any kind on its sides. While that's fine most of the time, it will be sorely missed in the heat of gaming, when palms are sweaty. It's definitely not as slippery as a glossy finish would've been, but you do slip a bit.

Despite that, we really like how Roccat's designed the mouse though. The LED colors (which you can also customize) are bright and highlight the mouse's shape nicely. It even switches colors when you're holding down the Easy Shift [+] key (we'll explain what this is later on), which is a nice touch. The thumb indentation is deep enough that you can get a solid grip on the mouse, though the one for your pinkie is a bit too shallow for our liking.

With so many buttons, the first few minutes of using the Tyon will be just getting familiar with what does what. While we were confused about using the mouse initially, it soon became second nature as we grew familiar with it. Apart from the main mouse buttons, the Tyon also has a couple of additional buttons to the side of your standard left and right click buttons. 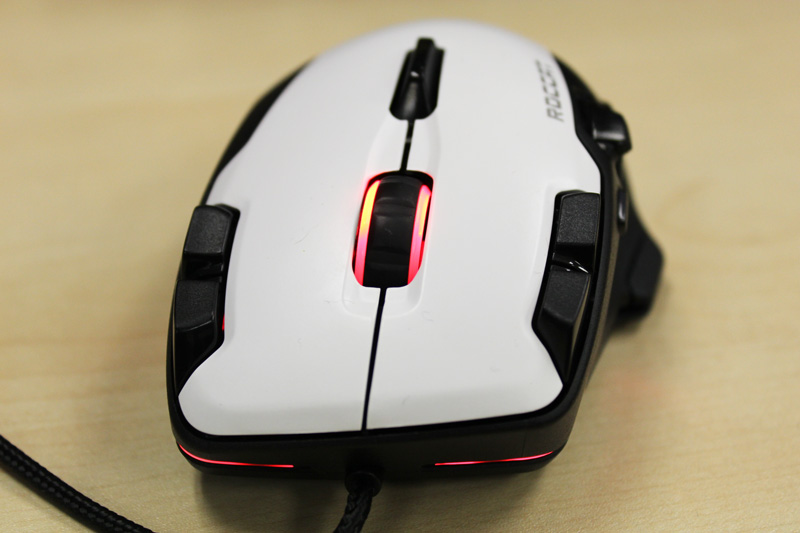 These buttons are fully customizable (like most of the others), but by default, the ones on the left mouse button control the DPI, with the top one raising it and the bottom one lowering the value. While intuitive to use, they do suffer from one problem - you need to raise your finger to use them. Since the sides of the buttons are curved, you can't just hit them with the side of your fingers. If you're using the default configuration, adjusting DPI on the fly can be a bit tricky, since you're essentially lifting a finger off the left mouse button, arguably the most important button in any game.

In thew center, you get to the mouse wheel. Unlike the Logitech Proteus Core, the Roccat Tyon's mouse wheel only has a single mode, similar to most mice. The stepped scrolling of the wheel is comfortable, though some might not like that the rubber grip on the wheel is ridged instead of being completely smooth. 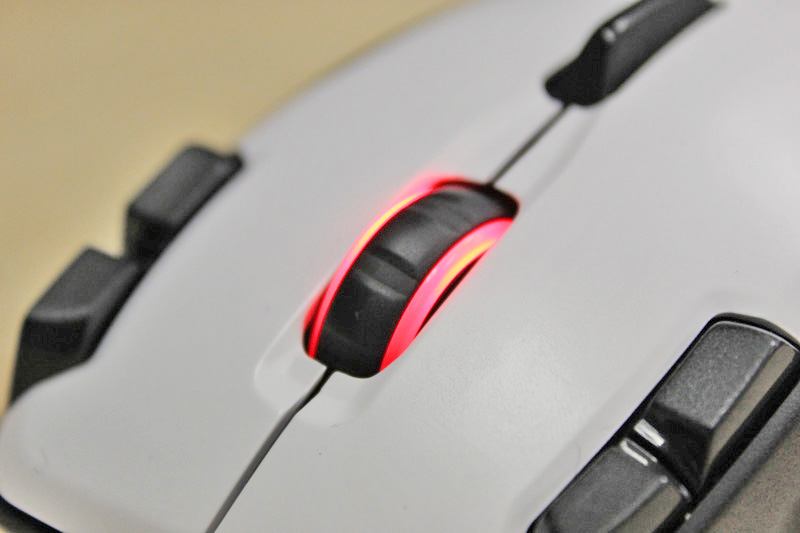 Weirdly, for all its buttons, the Tyon is oddly bare on its right side. There aren't any buttons or triggers of any kind. Clearly, this is a mouse designed for right-handers. Perhaps, the Dorsal Fin could've been positioned here instead. Using a pinkie to trigger it seems much more intuitive and useful than the sides of fingers. 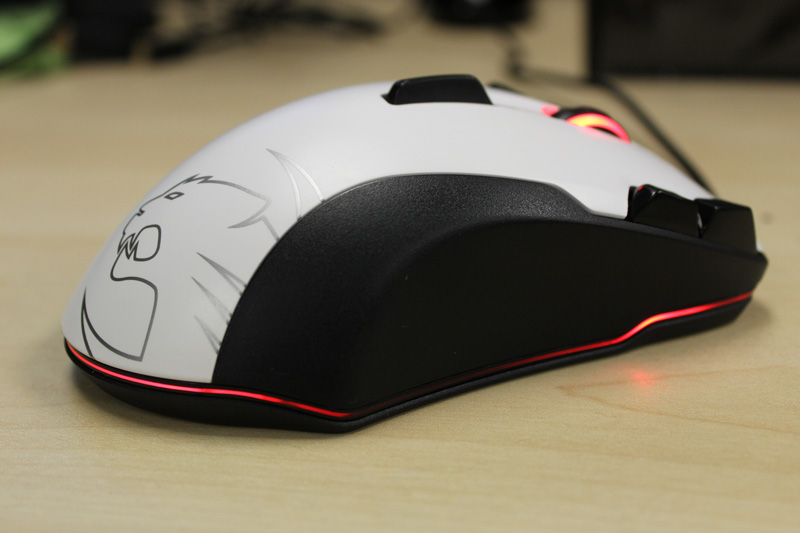 The other unique button on the Roccat Tyon is the X-celerator paddle. It's a flat piece of plastic that can go up and down. That's fine and dandy, but the main draw here is that the button is fully analog. What that means is that the paddle registers the slightest movement on it. For racing games, you can use it as a gas pedal. By adjusting how hard you're pressing down on it, you can regulate your speed naturally instead of by just pressing and letting go of a button. That's just one example though. The button can be used in a variety of games and it's just about how you prefer to use it. For us, we love this paddle because it basically combines the sensitivity of a controller's analog stick with the accuracy of a mouse. 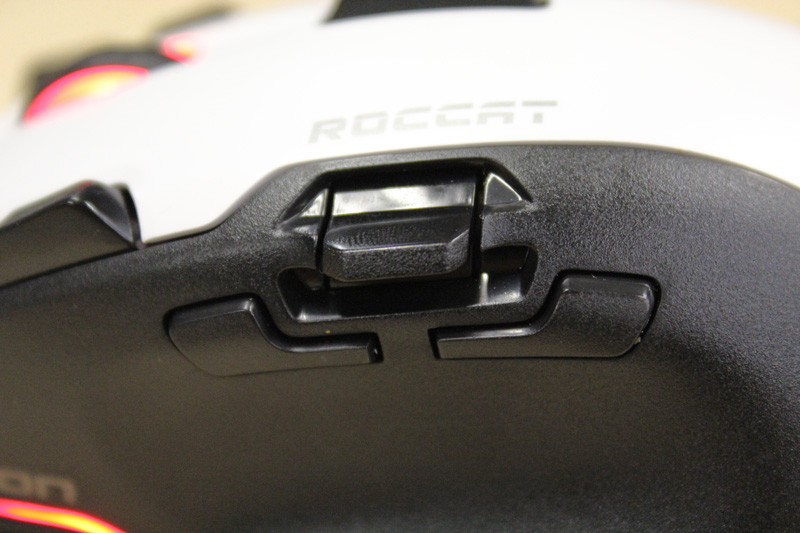 There are two more buttons that flank the X-celerator paddle. By default, these go forward and back on web browsers and file navigation. Then finally, at the thumb rest is the Easy Shift [+] button. 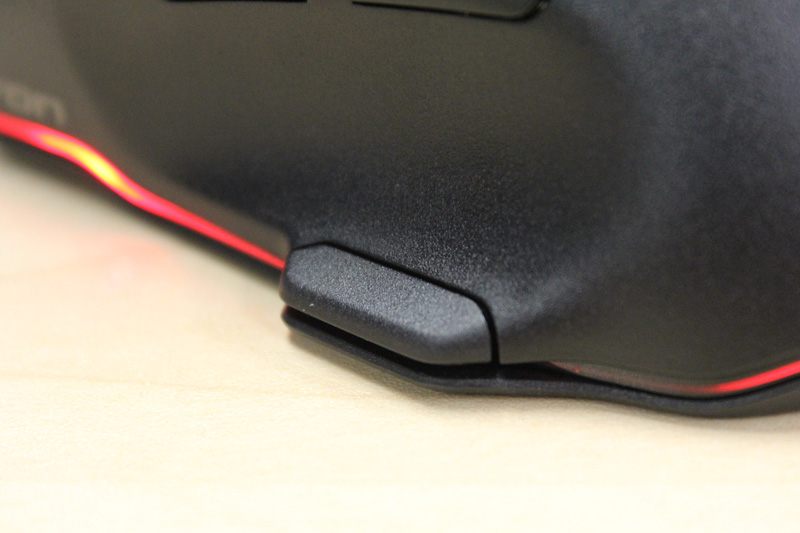 The Easy Shift [+] button is a modifier, as it essentially doubles the commands you assign to the physical buttons. For example, clicking mouse button 1 fires a gun. If you press the Easy Shift [+] key and then press mouse button 1, you can bind another command to it and have it treated as a different key press altogether. It works great in practice, though unless you're playing MMOs exclusively, you won't need the extra buttons. Despite that, it is still a very useful function to have and we wish more mice would copy it, and the X-celerator paddle too.

Finally, on the bottom of the mouse are two friction resistant feet. Nothing special about them, but they do get the job done. Moving the mouse around is easily accomplished; the gliding is smooth and requires very little effort. 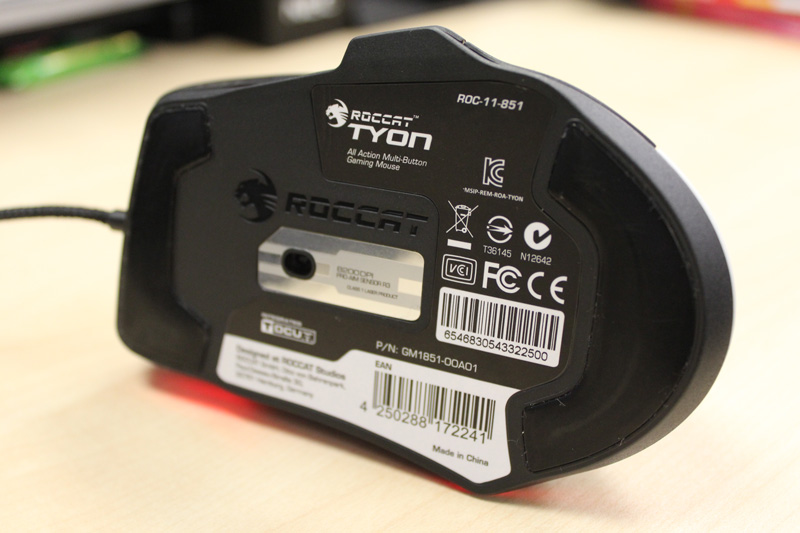 The Tyon is more suited for mouse users who fall into the palm grip category. Of course, we're not saying the other types won't be able to use the Tyon, they just won't be able to use the Tyon as effectively. Allow us to explain, for claw and fingertip grips, the center of the palm is usually off the mouse's body, which means the Dorsal Fin in the middle will be hard to access. When we used the Tyon, the Dorsal Fin sat comfortably in the middle of our index and middle fingers, which meant a slight nudge with the side of either finger can trigger the button. That's not possible with the claw or fingertip grip since the middle of the palm is raised.

Other than having to get use to the buttons and their placement, the Roccat Tyon is one of the best mice we've ever laid our hands on. With zero angle snapping or prediction, movement is entirely down to the user. The only downside to the Roccat Tyon is its total dependence on the Roccat Driver. The Roccat Driver is the configuration tool (which you need to download from Roccat's website) which is essential if you're planning on customizing the buttons and other settings on the mouse. 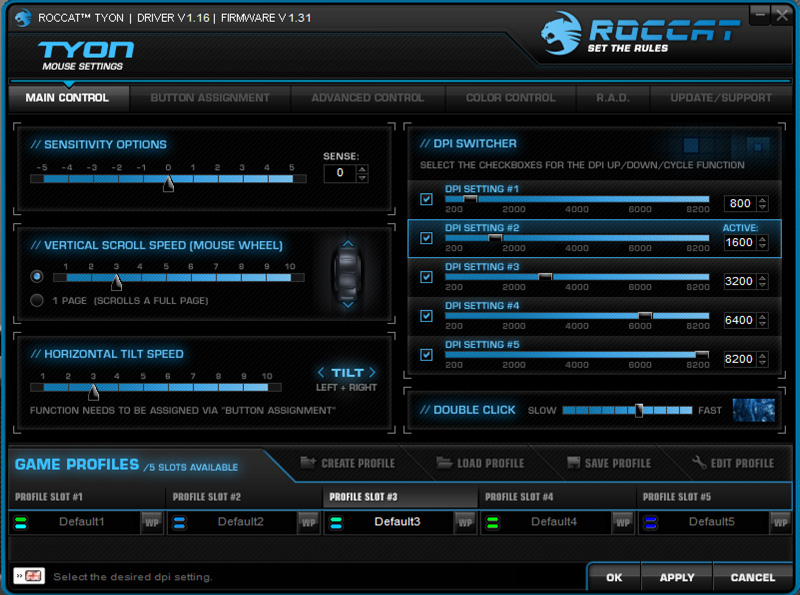 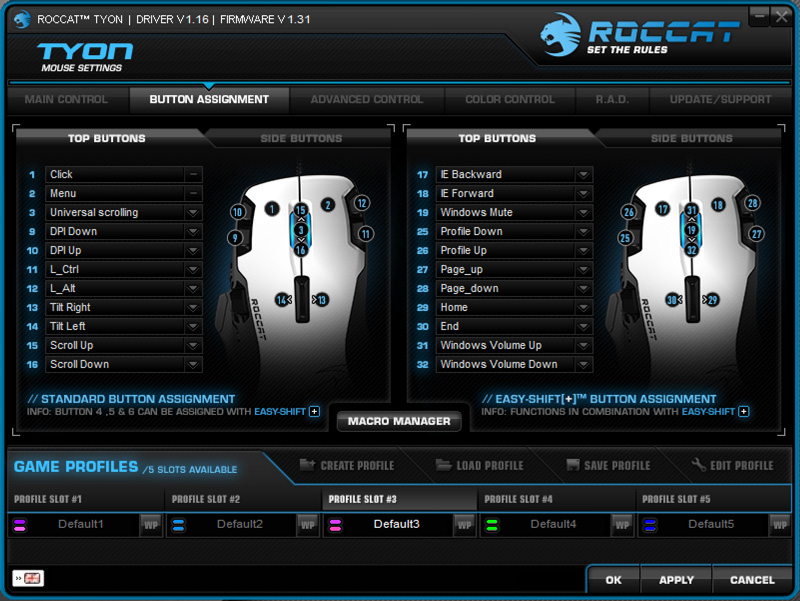 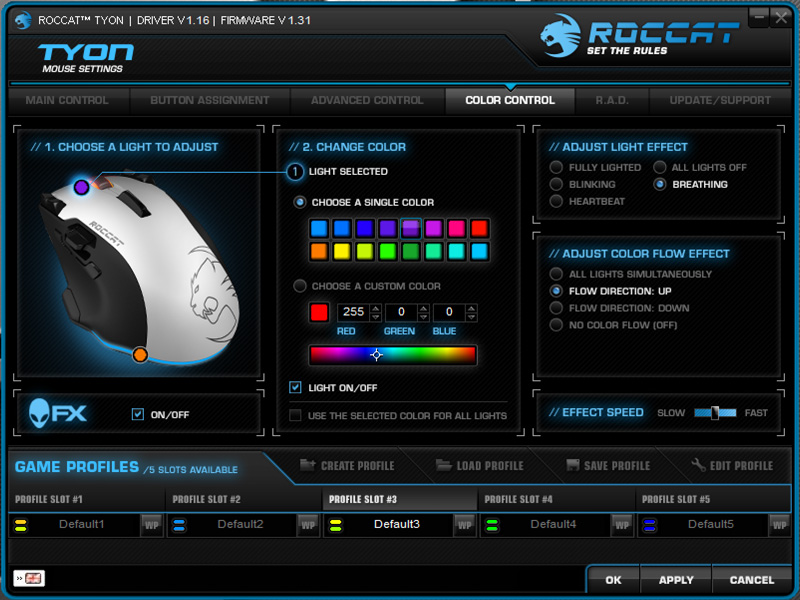 The Roccat Driver is user friendly enough, though there's a ton of customization options that might confuse gamers new to Roccat. However, calling the configuration program Roccat Driver is a tad misleading as we initially thought that the Roccat Driver was a driver program that could update the mouse drivers. Clearer instructions or a more accurate name for the utility would've been much appreciated. Of course, we would also have preferred to have a disc to install the Roccat Driver so that those without immediate internet access can still utilize the full functions of the mouse.

We definitely like the customization you can do though, even for the colors. We miss the color cycling effect from Alienware's AlienFX customization suite, but the Roccat Driver definitely comes in a close second for the amount of stuff it gives you to play around with.

The Roccat Tyon is one of the best gaming mice you can buy. The sheer number of options it gives you is incredible, enough to make any gamer drool. The configurable buttons, the customizable DPI and the X-celerator paddle only adds to the things the Roccat Tyon has going for it. The X-celerator button in particular is great because analog sensitivity actually gives opens up a whole new dimension in some games, one you will definitely miss when you go back to regular buttons.

The lack of rubber grips might frustrate those with sweaty palms, but not everybody will have that issue. That said, we do feel that the mouse could have used better material than the matte plastic it uses now.

Ironically, the main problem we have isn't the mouse itself but the Roccat Driver. It's extremely confusing to newcomers and more documentation would've been much appreciated. When we did get used to the Roccat Driver though, we found that it was extremely flexible and useful. We just wished that there was an offline version packed in with the mouse, even if it's an outdated version.

Despite the kinks though, we think the Roccat Tyon is a great gaming mouse. And at S$149, it is reasonably priced for a flagship mouse from a respected brand. It still has a few issues to work out and it's really only for right-handers, but you do get a lot of bang for your buck, more than enough to overlook its minor problems.

Write a Review
Compare This | Specifications
Tons of customizable buttons
Looks great
X-celerator paddle great for some games
Easy Shift [+] key essentially doubles the available buttons
Confusing configuration software
Slippery with sweaty palms
Dorsal Fin placement could be better
Some buttons might be tricky to reach while gaming
Only for right-handers
Our articles may contain affiliate links. If you buy through these links, we may earn a small commission.
Sponsored Links