The Ryos MK Pro is a fairly large keyboard with a built-in wrist rest area and Roccat's usual angular design with plenty of corners and cut outs. The keyboard utilizes an interesting matte black finish with a glossy micro-dot pattern that does a good job at repelling fingerprints and smudges. 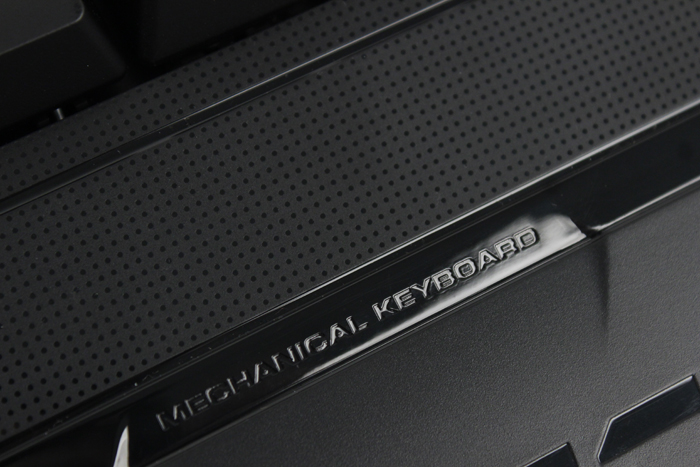 The built in wrist rest is quite large with a gentle taper that provides a comfortable typing position with ample resting space for your hands. Unfortunately, the rest doesn't utilize the same micro-dot finish so it picks up smudges quite easily. 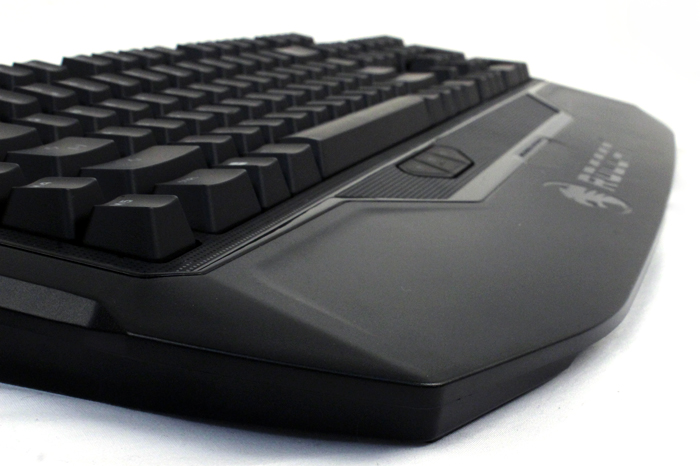 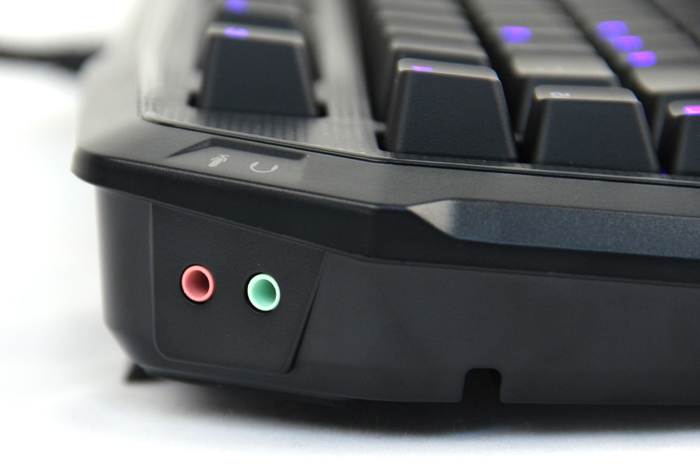 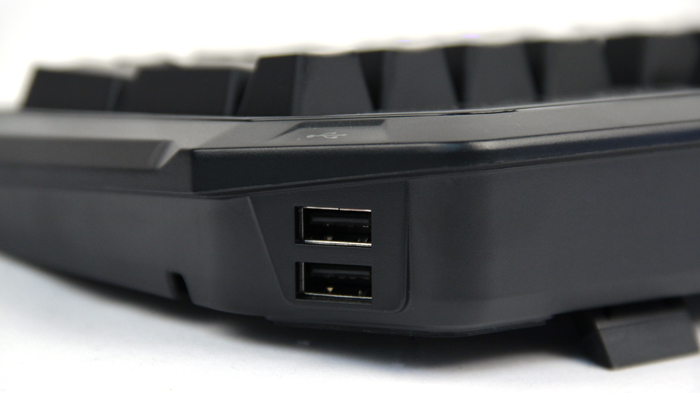 What separates the Ryos MK Pro from other gaming keyboards is its per-key backlighting. Two modes are available, Smart and Manual. Smart mode simply lights up a key for a few seconds after you've hit it. While this looks quite clever, and lets you easily identify which key you've hit, it's obviously not all that useful in practice.

The manual mode, however, is an incredibly powerful feature that lets every single key be customized and configured to light up or deactivate individually (one of the MK Pro's 32-bit ARM processors is actually completely dedicated to controlling this feature). There are loads of helpful ways you can use this feature, from highlighting in-game and application key bindings, to notifying you of available cooldowns and macro conditions. Essentially, you can set up the keyboard to tell you when you're supposed to hit a key, and have it then light up a visual aid to remind you to do so. Of course, if you prefer more standard backlighting setups like WASD only you can do this too. Now obviously this feature will be banned in any serious competitive tournament play, but for the average gamer playing from home, it could provide a huge advantage.

The MK Pro also includes 2MB of onboard memory, so even if you switch computers, you can retain your settings. 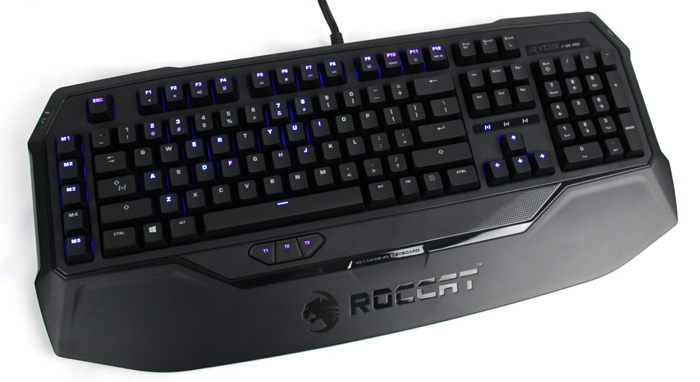 The backlighting color itself unfortunately can't be customized, but is a rather nice rich blue. There are also five levels of brightness available, with the brightest setting being one of the brighter backlights we've seen.

The MK Pro has the fairly standard row of macro keys along the left side of the keyboard. As with most gaming keyboards, macro recording can be done on the fly. 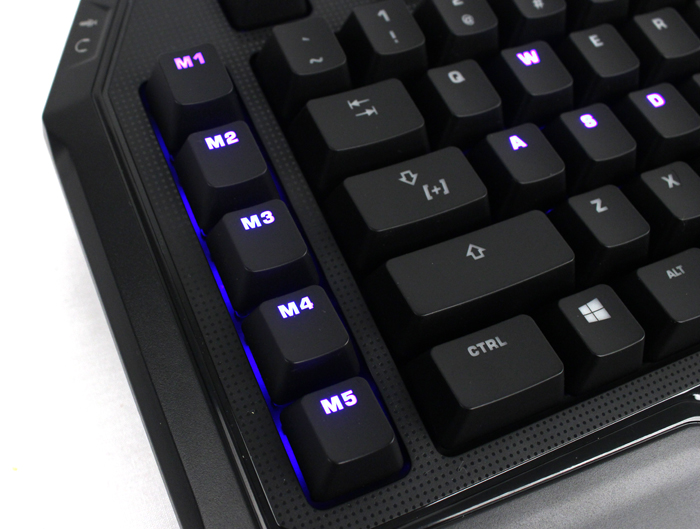 The keyboard also has a more unusual set of three 'thumbster' macro buttons conveniently located under the space bar. We actually found these buttons easier to hit than the macro row as each one is a different size and shape (the middle button also has a line on it), giving you a tactile clue that makes it easy to know which one you're hitting without having to look. We also found these keys faster to hit as they're just a short stretch away with your thumb. 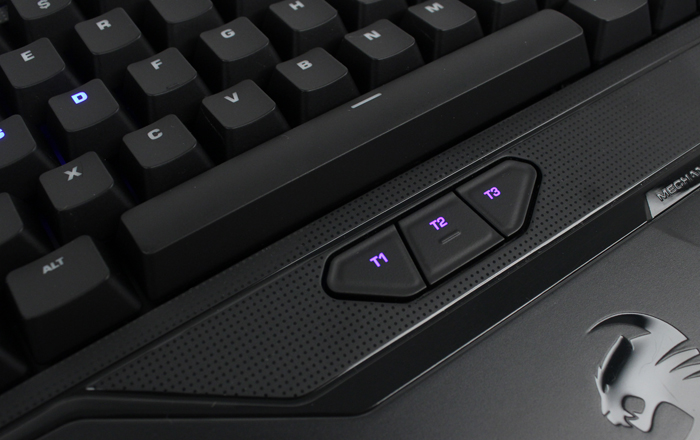 Like many of Roccat’s gaming mice, the MK Pro features Roccat's signature EasyShift+ key. It makes more sense on a mouse as your keyboard already has its own Shift key (as well as Alt and Control) but essentially it just adds another modifier key to work with. By default, the EasyShift+ modifier is set to the caps lock key, although it can also be toggled off or reconfigured. MMO gamers with lots of keybinds might find the extra modifier useful, as it’s actually much easier to hit than Left Alt. 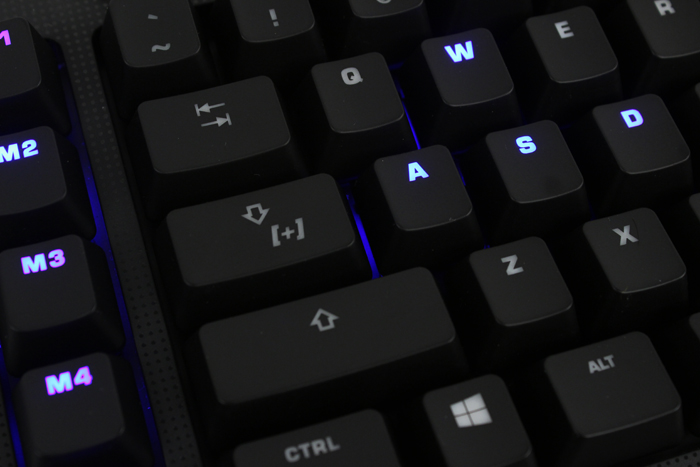 Black, Blue, Brown or Red? The Choice is Yours

To suit all preferences, the Ryos MK Pro is available in four of the most popular Cherry MX Switches: Black, Blue, Brown, and Red. Each keyboard retails for the same price. Our particular review unit is equipped with Black switches, and displays the typical smooth, if slightly stiff, punchy feel of MX Black keys. The keys themselves are fairly standard, of average height and with the usual concave cylindrical shape and an easy to read font. 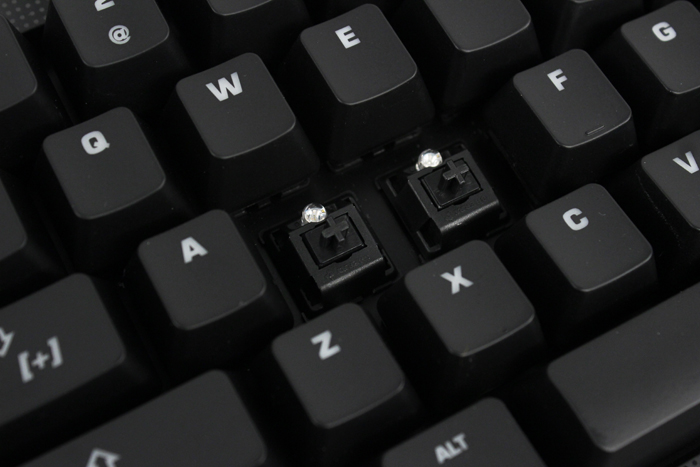 The only negative we can fault the Ryos MK Pro's keyboard with, is that the Windows key remains precariously positioned on the left side. While it is possible to disable it through software configuration, we would have preferred if it was relocated to the right side, or if there was at least a dedicated Windows lock key.

The MK Pro supports N-key rollover via USB. This is fairly puzzling because, as most people know, true N-key rollover is only possible through a PS/2 connection, due to the limitations of the USB controller buffer size. While we've seen other keyboards work around the problem - usually by cloning the number of keyboards the computer registers and thus sending multiple inputs at the same time - these methods tend to be good for only up to about 26-key rollover. We're not sure what method Roccat is using but it seems to work as the MK Pro scored perfectly in the Aqua'S KeyTest we use to check Key Rollover.

Roccat has been a bit slow to join the mechanical keyboard party, but the wait has certainly been worth it. Mechanical keyboards are often very similar to each other - in fact, many are just rebranded OEM models, but the Ryos MK Pro is something quite special. The keyboard is well thought out with a comfortable design and plenty of easily accessible macro keys. Per-key illumination is a killer feature that can provide a real advantage and will probably find a lot more use than other gimmicky keyboard features like built in LCD displays and modular number pads. While N-key rollover via USB shouldn't theoretically work, Roccat seems to have made it possible, which is a real breakthrough.

It remains to be seen how much the MK Pro will retail for locally, however it has a US SRP of $179.99 (~S$230), which should put it inline with other high-end mechanical gaming keyboards like Logitech's G710+ (S$219) and SteelSeries' 7G (S$239). If the local SRP falls under S$250, the MK Pro should easily be the first choice for anyone looking for a high-end mechanical keyboard.