The compact camera with near-DSLR quality is the holy grail of the digital compact camera market, and the search for it sure intensified during 2009.

The DSLRs hung in there with smaller versions of their entry-level models, packed with more features like built-in guides in the Nikon D3000 and the Sony Alpha 380. The Micro Four Thirds gang arguably hit closest to the target with the popular Olympus PEN E-P1 and the Panasonic GF1, but although both cameras were smaller than the smallest DSLRs, they were comparably bigger than any compact.

And where was Canon going to be in this zone? We all thought we knew: an update to the PowerShot
G-series - bigger sensor than a compact, but larger and heavier. We guessed right, the G11 was released with a swivel LCD screen, but no one saw the surprise camera that was announced together with the G11, the PowerShot S90.

And that's what makes the S90 so exciting. Canon has somehow managed to take the large sensor of the G-series and squeezed it into a compact camera body that's only slightly larger than a regular compact. Not only that, they've included full manual controls, and a unique manual control ring that's not even found on the G-series. All this would have been exciting enough, but they even threw in a fast f/2 lens, which is no less of a shot across the bow for near rival Panasonic LX3 which also features an f/2 lens.

Does it work though? The G10 had some issues with image noise, did Canon manage to overcome that with the S90 or is it still a noisy camera? Does the larger sensor work well in a smaller body than the G11's? Does the new-style manual control ring work, or is it a doomed innovation that shouldn't have left the planning room? Has Canon found the holy grail with the S90? Yes, yes, no, yes, yes and maybe. Read on and find out why. 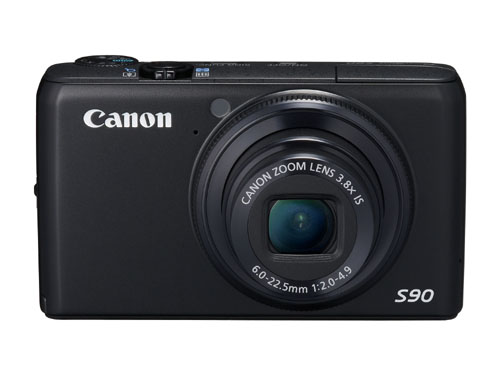