The Medium (PC) Review: More of a spooky thrill ride than an actual horror game 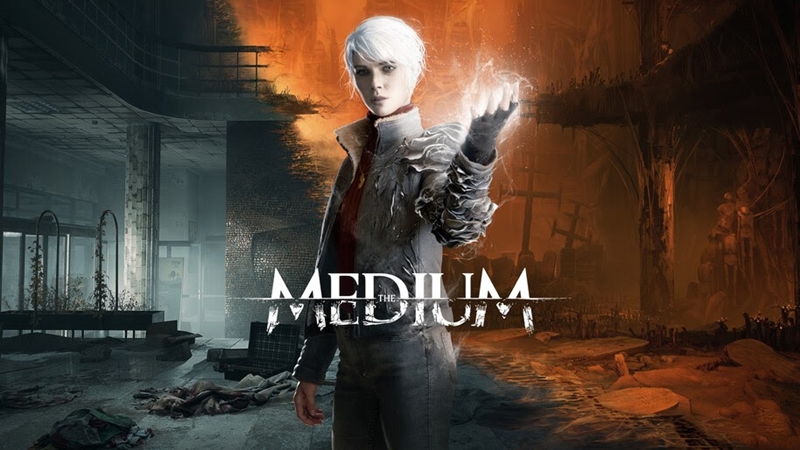 Yes, I know it's hard to believe, but apparently the one guy at the HardwareZone | GameAxis office with zero appetite for horror games willingly signed up to review Bloober Team's newest psychological horror title The Medium. No bulls**t.

Honestly, I think my brain blew a fuse or something when I said "ok.".

Fortunately, though, the game wasn't as scary as I imagined it to be, and I will admit I was intrigued by the developers' use of the whole "dual-reality" angle. Anyway, for those who can't really stomach ghostly monstrosities suddenly jumping out at you a la Outlast and Five Nights at Freddy's, I'm happy to inform you that this game doesn't have jumpscares, and as such it makes a really good entry title to the horror genre. To top that off, it also features a pretty decent narrative to boot. 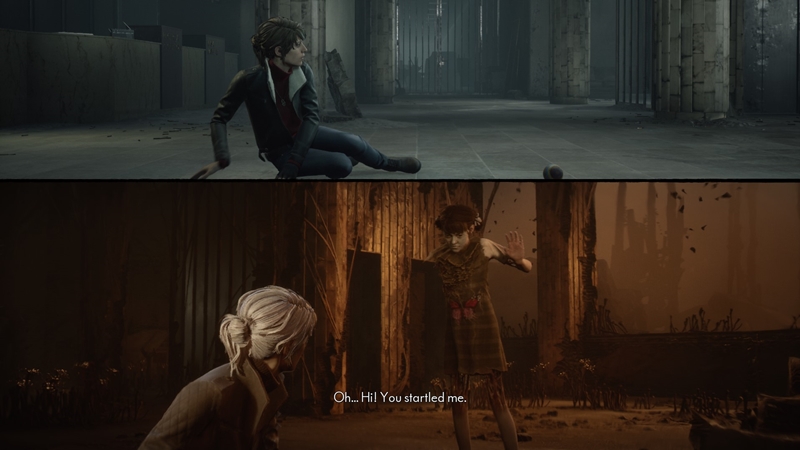 But before we deep-dive into the gameplay and other aspects, let's see what we've got to work with plot-wise. In The Medium, you'll step into the shoes of a young lady named Marianne, who is gifted (or cursed, in some ways) with the ability to perceive spiritual entities and enter their world.

After the death of her adoptive father and guardian Jack, Marianne receives a call from a mysterious man named Thomas, saying he has more information on her otherworldly powers and invites her to a dilapidated old resort called Niwa. When she arrives, Marianne quickly discovers that she's way in over her head, as a malevolent, bloodthirsty entity called The Maw attempts to possess her body and use it to invade the real world. However, she is persuaded to stay and uncover the truth by the spirit of a young girl called "Sadness", whose story just might bring all of Niwa's metaphorical (and actual) skeletons out of the closet.

Now, I'd be lying if I said I didn't enjoy at least this part of the game. I'm always a sucker for a good story, and for what The Medium lacks in actual jumpscares it more than makes up for with its impressive aesthetics and intriguing (yet disturbing) narrative. It might start off a little "traditional" at first, but it quickly becomes evident that this isn't your typical campfire ghost story - it's more unnerving than actually horrifying, and the most you've got in the way of scary stuff is that occasional sequence where you have to run away from The Maw, or the grotesque architecture of the spirit realm if you want to count that in. 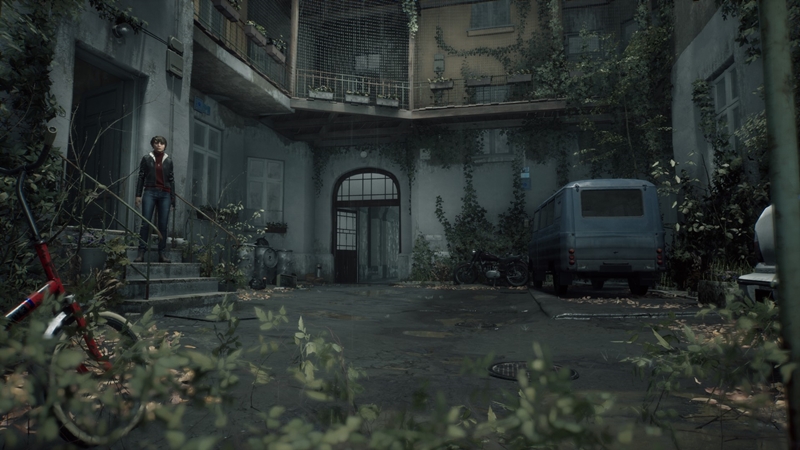 Speaking of architecture, the real world architecture adds a few more points to the "scare factor" as well. By making use of a time period like the 1960s which isn't completely ancient, yet not completely modern, Bloober Team has managed to achieve that nice sweet spot between the spookiness of a classic haunted house with the dreariness of an abandoned modern facility.

The audio sports similar flavours too - it's eerie and ominous, and while most of the time you're physically alone exploring the abandoned resort, the developers have tuned it such that you never really feel alone. If you immediately thought of Silent Hill, then you're right on the mark, because the composer for The Medium is none other than Silent Hill's Akira Yamaoka, which explains the game's masterful mood-setting with regards to audio. In fact, I'd also like to extend a nod to their use of silence throughout the game, especially when Marianne is navigating by torchlight through pitch dark rooms. In those cases, not hearing anything at all is probably a lot more unnerving than having spooky background music.

Of course, this isn't that surprising - jumpscares have never been the main focus of Bloober Team's modus operandi, to begin with. They've always been about instilling a sense of dread and insecurity - the studio is absolutely prodigious at setting up these "monster under your bed" vibes, and all things considered, The Medium is no different. 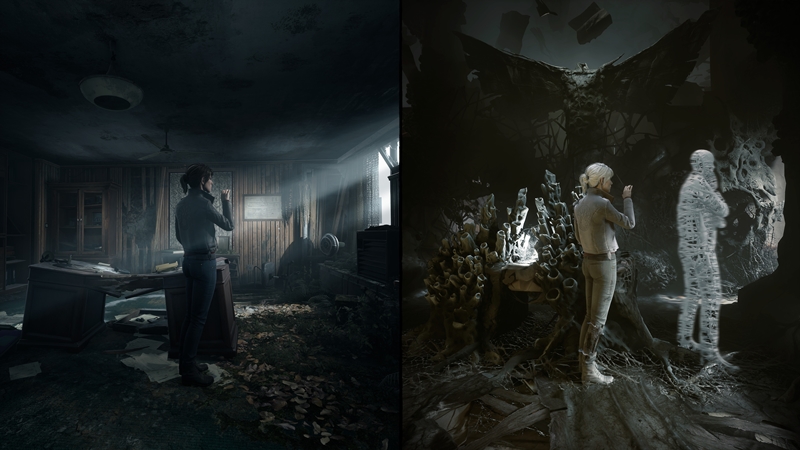 And thy puzzle-solving skills too.

When it comes to gameplay, I find that The Medium is kind of, well...medium. It's definitely not bad, but it tends to come across as a glorified walking simulator. Most of your time in Niwa is merely spent exploring the place and looking for tools to get you past the next roadblock, and I'm actually a little disappointed here. Frankly, if the developers hadn't introduced this whole dual-reality thing, The Medium might have ended up as a more simplistic Resident Evil without the combat aspect. Meanwhile, the character movement and control schemes, while simple and easily understandable, can sometimes be frustrating due to the lack of player-controlled camera adjustment.

You see, most of the time when Marianne wanders through a door or entrance, the camera doesn't change until she's one or two steps into the next room, which then means you'll have to change your directional input to match the new angle. It's an age-old problem that we could do without, and although I do respect Bloober Team's artistic freedom in designing their games, it doesn't make the occasionally awkward camera transitions any less frustrating.

Moving on, how exactly does Marianne's ability factor into her adventure in this abandoned facility? To keep things simple, solving puzzles and interacting with objects in one realm can open up new options in the other, and similarly, having roadblocks in one realm means your other half isn't going anywhere.

For example, there will be cases where a secret entrance is only visible to Marianne's spirit form, and the game turns into a kind of "spot-the-difference" between the real and spiritual worlds. Naturally, some parts will be blockaded by swarms of spiritual moth things, so make sure to keep a lookout for Spirit Wells. By using one of these to recharge her energy, Marianne can burn away the moths, or even create a temporary shield while she wades through the swarms. 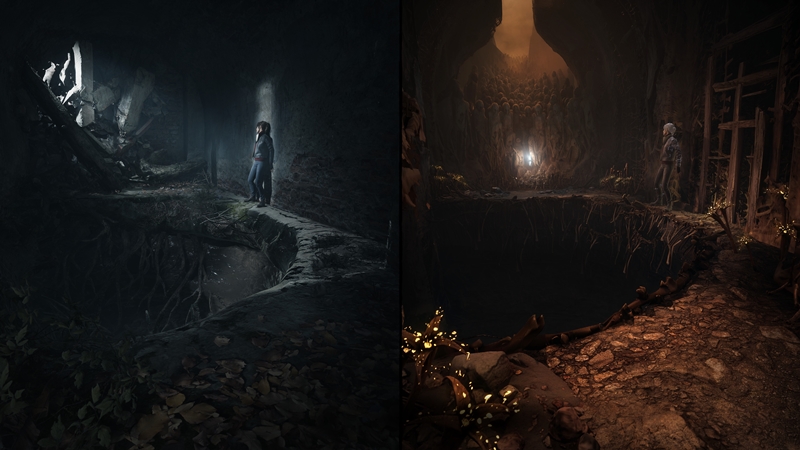 That's about all the game features in the way of combat too. Even your encounters with The Maw (who happens to be voiced by the awesome Troy Baker) doesn't come with any "toppings" we haven't seen before - you're either running from it, trying to sneak past it to the next Spirit Well, or if you fail at both of the above, you're instantly killed. However, credit should be given where it is due, and the stealth sequences are really, really nerve-wracking - you're alone in a realm with literally no one (alive) to help you, and your adversary is a roughly ten-foot tall giant moth-like monster with a seemingly huge mouth for a face. Go figure.

Getting back on topic, if there's any significant flaw within the whole gameplay aspect unrelated to the technical end, it would probably have to be the repetitiveness of the puzzles, in my opinion. After you get through the first hour or two, the methods to solving the remaining puzzles are going to be roughly the same as the ones you've already completed. You're usually scouting around in the spirit realm via your out-of-body experiences for spirit wells to charge generators with, which then operates an elevator or opens a door, and then you do it again. And again.

In that sense, I felt Bloober Team didn't manage to bring out the full creative potential of this dual-reality thing they've got going on, even though the concept is a novel one. Coincidentally, this applies to the game in general too - since it places a lot of emphasis on its one solid narrative, it's no exaggeration to say that there isn't a lot of replay value, unless you intend to collect all of the spiritual Echoes within Niwa. In other words, even the most wondrous of fairy tales loses much of its lustre after you hear it the first time.

Still, if there's something I'm sure of, it's that the real beauty of The Medium isn't seen in any one individual aspect - you have to sit back and take it in as a whole. I'll be blunt - if you're here for something to scare your socks off for a few instants, you'll be pretty disappointed. However, if you are playing The Medium for an experience that will keep you up at night thinking and leave you wary of every shadow for the next couple of weeks, then go ahead and have a good one.

Here's why one plus one equals three 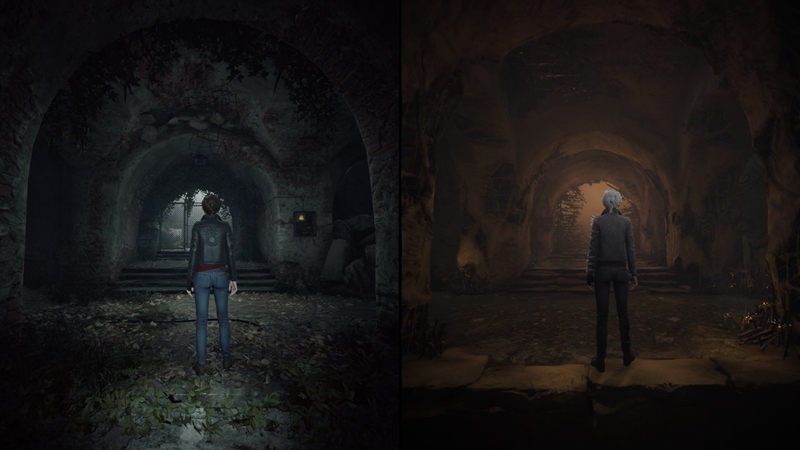 Going by that train of thought, I guess The Medium supposedly operates on the same level as games like Dead by Daylight and Hello, Neighbour, where the experience as a whole is substantially greater than the sum of its parts. The game might not have much in the way of actual excitement, combat or otherwise, but its narrative is nothing short of enrapturing, and it is only complemented by the developers' use of grotesque architecture, dark spaces and a nightmarish antagonist that chases you every so often.

Granted, the game does stray away a little from the usual horror formula we're used to seeing in modern video games given its lack of gore and jumpscares, but in exchange, it seems Bloober Team has managed to nail down a far more important element in their storytelling: unpredictability. I mean, the biggest underlying reason behind the success of the horror genre, be it in the form of video games, films or TV shows is because you don't see it coming.

Write a Review
Decent entry-level horror title for those new to the genre
Dual-reality concept is pretty cool and has a lot of potential
Exceptional aesthetics, audio and mood-setting
Narrative is intriguing while still being top-tier spooky
Not much incentive to return after the first playthrough
Puzzles tend to be rather straightforward and simplistic
Not much "action" in general, which might leave some players wanting
No possession! Bad Maw, BAD!
Our articles may contain affiliate links. If you buy through these links, we may earn a small commission.
Sponsored Links