Review: Doom Eternal is an outstanding shooter, maybe even the best of all time 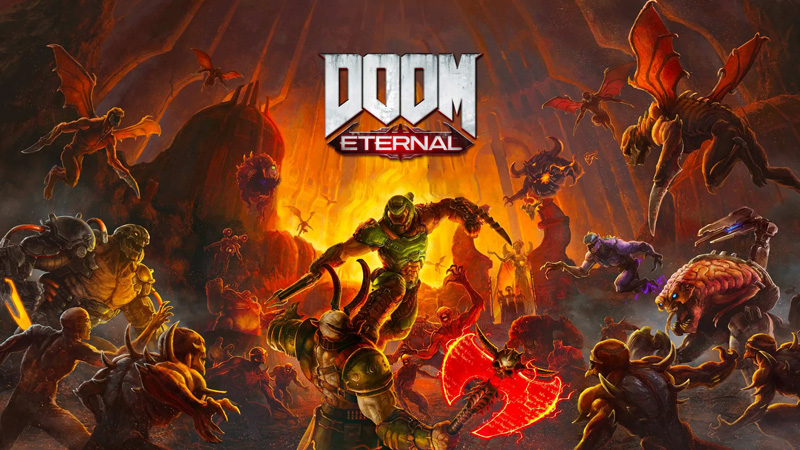 Doom (2016) was my favourite shooter of all time. The soundtrack, weaponry, atmosphere and level design all made for one of the best gaming experiences I’ve ever had. Having said that, Doom Eternal is twice as good. It takes the first-person shooter formula that the developers at id Software pioneered with the original Doom (1993), and perfects it. It challenges your skill level at every turn, enriches Doom’s lore with aplomb and throws you into spectacularly-designed arenas with some of the most jaw-droppingly detailed environments in all of gaming.

“There is only one dominant life form in this universe, and it carries a steel-barreled sword of vengeance.”

This sequel takes everything Doom (2016) did right, and throws away everything it did wrong. More weapons, more demons, more environments, a deeper story and the best first-person shooting money can buy - all densely packed into a 20-hour campaign for the ages. And it has a multiplayer mode, too!

Where we last left off… 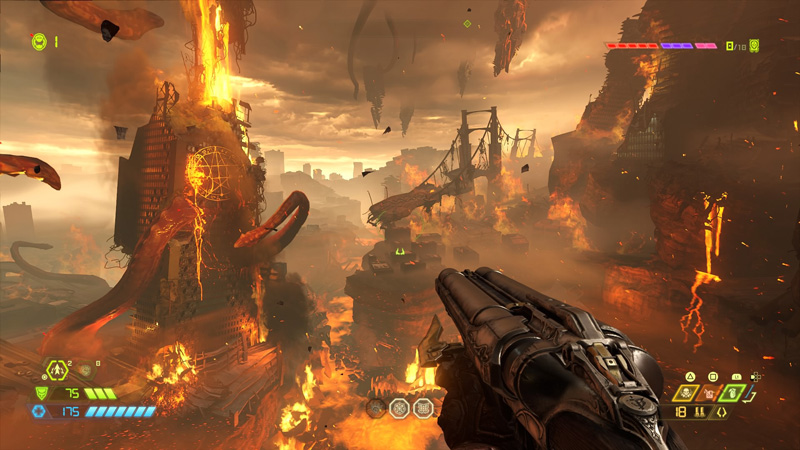 Before we get to the ripping and tearing, let’s set the scene first. Doom Eternal picks up two years after the bloody events of Doom (2016). Hell has arrived on Earth, despite all of the Doom Slayer’s previous attempts to stop them on Mars and in hell itself. 60% of humanity has been utterly wiped out, with the rest either fighting to survive or already in the midst of being overrun. The Slayer hears their cries for help on his Fortress of Doom (not joking) and cocks his shotgun, teleports to Earth and gets back to doing what he does best: blasting demons to bloody bits.

Every cutscene in this game is short and sweet, and never betraying the tone of the franchise - pushing players from one level to the next organically while making them feel like the biggest badass in the universe. Players can pick up codex entries throughout the game, which serve to inform them on the lore of the world - such as who governs hell, what the Makyrs are, and how the Slayer got so strong in the first place. That works nicely for both types of Doom players - the ones who just want to make demons explode like meat balloons, and the ones heavily invested in the games' lore. 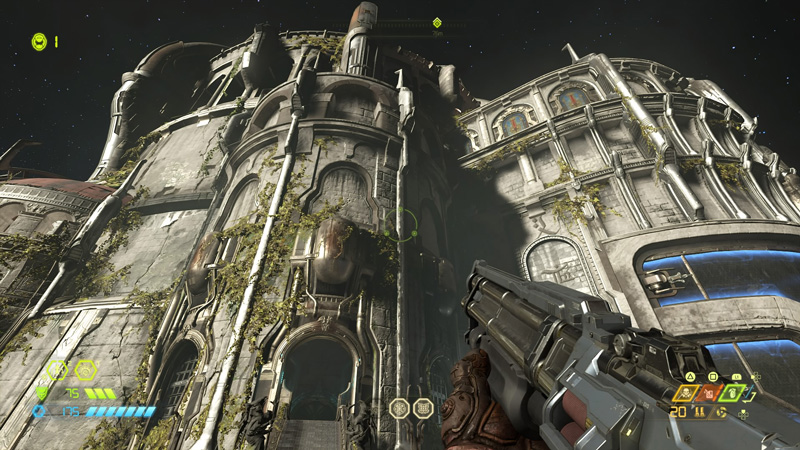 All this is to say that the story is fantastic. It's intricately detailed, expanding on the lore of the classic games - from 1993's Doom to 1997's Doom 64 - in surprising ways. The story, though it appears minimalistic at first, is rich in flavour, told in its environment as much as it is in cutscenes. You'll find yourself asking more than a few intriguing questions as you rampage through the campaign, and the answers that come won't disappoint you. 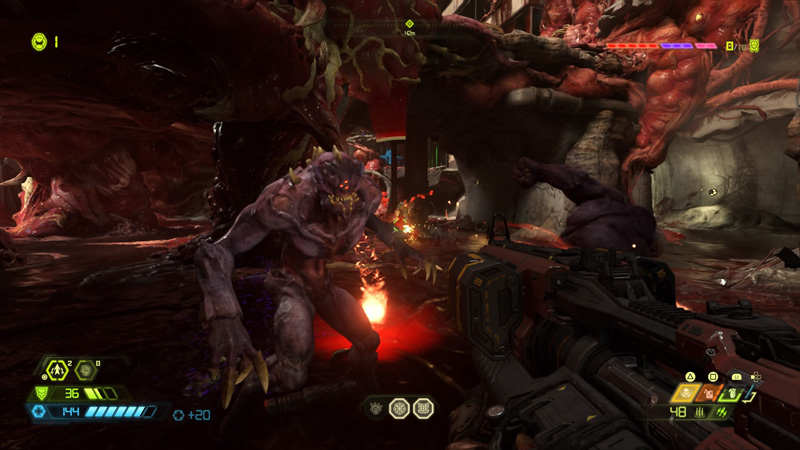 While talking about Doom Eternal, game director Hugo Martin at id Software made frequent mention of ‘the fun zone’. Doom (2016)’s core gameplay loop of running around and killing demons was a lot of fun, but it got tiring by the end due to a lack of enemy variety. The game's biggest issue was that it wasn’t pushing players enough to try different things. Trying different weapons and making full use of the environment during intense combat encounters feels satisfying and challenging. That’s the fun zone.

Doom Eternal has a very specific and unique combat loop that you won’t find anywhere else, which pushes you to be as tactical as possible without sacrificing that fun factor. Ammo is much more limited this time around, but you can chainsaw enemies for more ammo. Demons hit harder, but you can use your Flame Belch ability to replenish armour. Enemies may overwhelm you - but glory kills will give you a steady stream of health. Combat feels drastically different, and by that I mean much, much better. 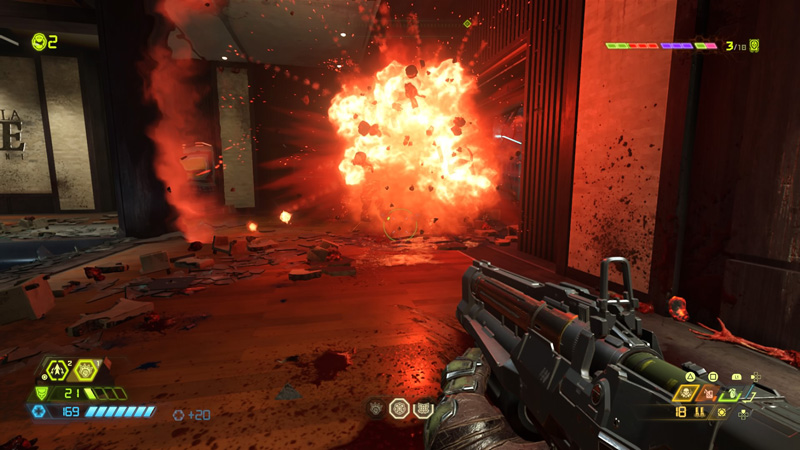 The early levels of Doom Eternal will definitely take some adjusting to if you’re coming in fresh to the series - or even if you’re jumping on right after Doom (2016). Many things have changed, and the combat has become much more cerebral as a result. You’ll constantly have to keep an eye on your ammo and resources, while getting one up on every enemy around you during fights. In the beginning, this might seem frustratingly hard. Soon enough however, it will become satisfyingly challenging.

One of the major selling points of this series is that it allows you to shoot things and feel like a god while doing so. No other game does this better than Doom Eternal. Sure, it makes you work for it, but by doing so it makes you feel like you’ve truly earned every victory you claim over the demons. It never feels unfair even in its most challenging moments - because you’re just learning how combat works with every death. The game even gives you generous amounts of extra lives to mitigate that!

Write a Review
Compare This | Specifications
Excellent gunplay and weaponry
Great story and characterisation for the Slayer
Game mechanics are fun and challenging
Tons of enemy and environmental variety
Extraordinary soundtrack
Battlemode might not be as fun for those who want to play as the Slayer
Our articles may contain affiliate links. If you buy through these links, we may earn a small commission.
Sponsored Links