Review: Cyberpunk 2077 on PlayStation 4 and Xbox One should be avoided at all costs

Let's talk about the story and combat 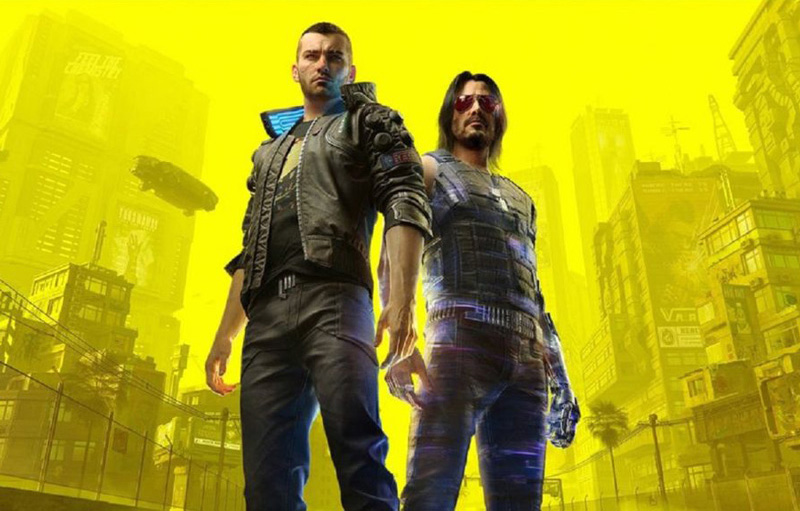 It’s been a long seven years since CD Projekt Red dropped their first cinematic teaser for Cyberpunk 2077: a highly ambitious open-world game set in the far-flung future, from the creators of The Witcher games. The teaser ended with a rather bold statement: ‘Coming: when it’s ready’. That sentence has aged like milk on a sunny day.

In many ways, Cyberpunk 2077 still delivers. Night City is a jaw-droppingly beautiful place, and every crevice of this world brings about a renewed sense of spectacle. The game’s story is an action-packed tale of survival held up by the charms of one Keanu Reeves. The characters you meet and stories you experience will likely stay with you for a long time.

However, playing Cyberpunk 2077 on current-gen consoles is a lot like snapping the leg off a table before standing on it. It’s not going to go well for either you or the table. The game is being sold to the masses in an unforgivably broken and unfinished state, making it nigh-unplayable for most console owners. When I wasn’t seeing game crashes and a host of other performance issues, a myriad of bugs and glitches greeted me instead. It felt like I was biting my nails at all times, anxiously wondering when the next thing to completely break the game would show up.

Note: this review is based on the PlayStation 4 version of the game. A PC review of Cyberpunk 2077 is also forthcoming, as the game has launched there with far fewer issues.

Where is my mind? 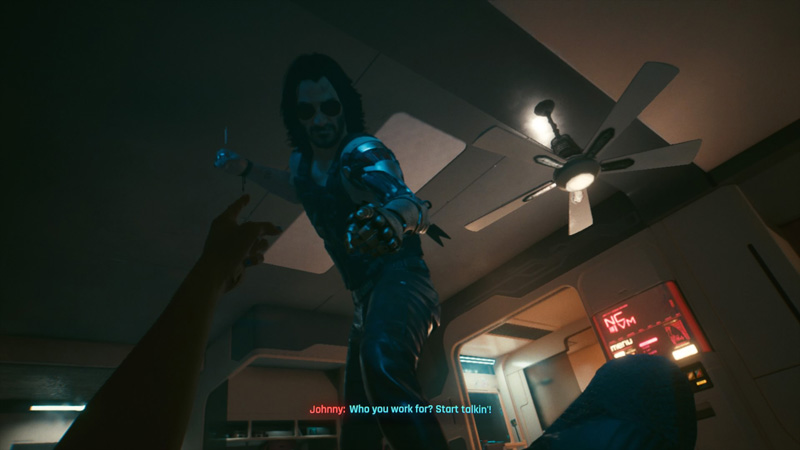 Cyberpunk 2077 puts you in the shoes of V, a mercenary who enters the city from three different places, depending on what life path you’ve chosen. For example, picking Corpo would have V working for a mega corporation, sent into the city on orders from a higher up. Whichever life path you choose however, know that they branch towards the same main storyline after the game's prologue. Each V enters Night City after a brief mission, and never looks back. You’ll have different dialogue options later on depending on whether you’re a Nomad, Street Kid or Corpo - but they never feel consequential, and as such, the entire concept of life paths feel disappointingly hollow.

Character creation is robust enough to let you be exactly the kind of V you want to be. There are a huge amount of options to fiddle with, ranging from hairstyles to genital size (yes, really). Since the game doesn’t include first-person cutscenes, you’ll usually only see V in mirrors or menus, making this whole process feel a little unrewarding. You will want to choose wisely however, as the game has bafflingly provided no way to change V’s physical appearance in any way during the story - I'd at least hope to be able to change my V's hairstyle, add or change my tattoo, and so forth.

The story takes its time to introduce you to Night City and its people, before throwing you into an ambitious heist. Unsurprisingly, this heist goes terribly wrong and V gets stuck with an experimental biochip in their head - one that allows them to see and interact with a long-dead Night City legend: Johnny Silverhand. The duo then traipse across Night City on an incredibly dangerous series of missions with a ticking clock, but it’s not all bullets and mayhem.

The world portrayed here is a dystopian one, its darker underbelly covered up and painted over with neon lights, flying cars and modern conveniences. Make no mistake, however: Night City is a terrible place to live. Different districts of the city are governed and controlled by separate factions of gangs and criminals. The streets are rife with crime, and shoot-outs can erupt from around the corner with no warning. Massive, monolithic buildings tower over the populace, reminding them of the mega corporations that have their roots buried so far under the city so as to be rendered untouchable. 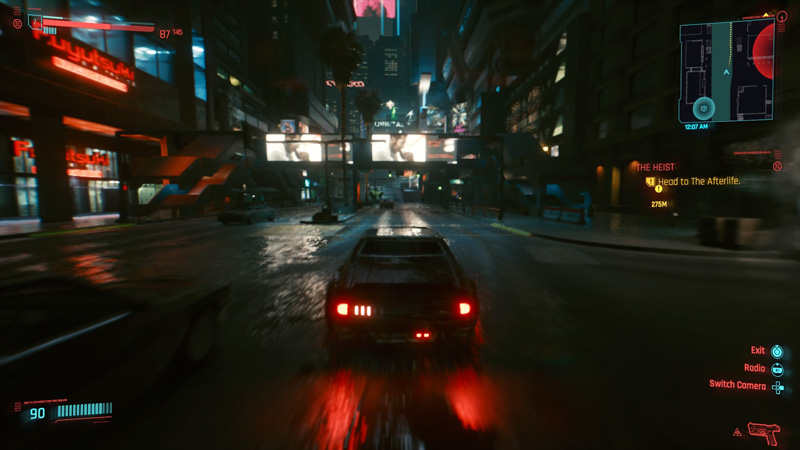 Night City is a breathtaking place to be, and the characters you meet in the story campaign reflect its borderline chaotic levels of diversity. There are people who avoid the city, and choose to live in the Badlands beyond it instead. Others work for corporations or in politics, engaging with Night City in a matter unfeasible to the criminals that loot and plunder for survival. You meet all of these people, and more. The very best moments of this story usually happen when it slows down, too. That’s when V has heart-to-hearts with friends and allies from all walks of life, and the game delivers some surprisingly emotional moments.

Much like The Witcher 3, Cyberpunk 2077 has a massive amount of quests to offer. The main story is a lot shorter than expected. I suspect that you could finish it alone in less than 20 hours, but you’d be robbing yourself of the opportunity to experience the best stories in this game, which lie in its side jobs. Many of them introduce Night City’s most fascinating individuals, who often return in more quests down the line. Your choices can be quite consequential on their lives, too. I walked away from this game loving the optional side quests most - such as a truly disturbing one that had V encounter a would-be messiah, or another with a chrome-faced singer in a dingy motel room.

I’d love to tell you that Cyberpunk 2077’s main story delivers after such a long wait, but I walked away from it feeling pretty empty. It certainly doesn’t hold a candle to The Witcher 3 or any of its expansions, likely because V feels like such an underdeveloped character. The mercenary simply doesn’t carry much personality no matter which life path you’ve chosen, and I never felt as invested in their journey as I wanted to be. By comparison, Johnny Silverhand is a sarcastic, borderline unlikable douchebag through and through, but he’s also a superb companion to the various gigs and side jobs V undertakes in Night City. He always adds a little something to every quest you go on - even if it’s small as a snappy retort.

One of my favourite interactions with him happened while tailing a client’s wife down the street - and he narrated the whole thing as if he were in a noir detective story. The back and forth banter between him and V adds much-needed depth to the flavourless mercenary. Dialogue feels stilted and awkwardly written however, compared to CD Projekt Red's acclaimed The Witcher series.

Popping out those Mantis Blades 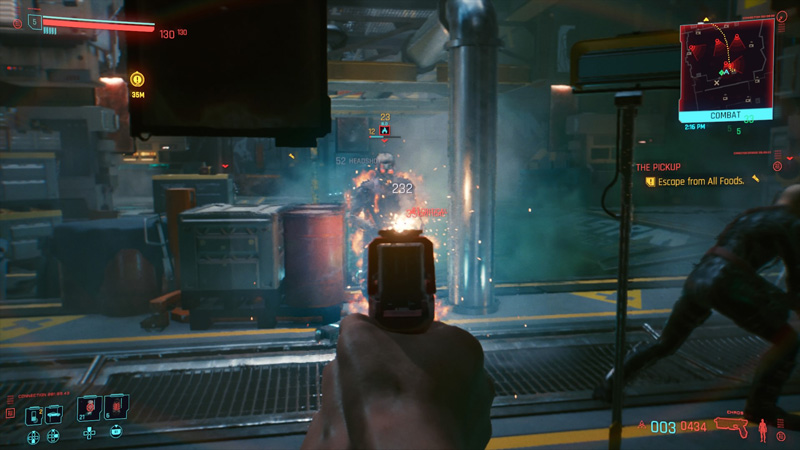 You’re given an impressive amount of options in navigating each one of Cyberpunk 2077’s missions. Almost every side job I completed allowed for a stealth route, which means that you can easily get around higher-level enemies without ever having to engage in combat. Earning XP and levelling up also allows you to invest in V’s five attributes, and the various perks that lie within them.

If you level up the ‘Body’ attribute for example, you’re essentially making V stronger - and that opens up other avenues in missions. A high Body level allowed me to intimidate NPCs into giving me free stuff during side jobs, and talk others down from combat. In hostile areas, I could tear open locked doors instead of finding my way around them. Levelling up Attributes also reveal different Perks, which you can then unlock with separate Perk points. For example, the Body attribute relates to V’s physical shape, so its Perks include upgrades like ‘10% more health’. Different Perks allow you to finetune your playstyle, which is nice, but this system isn’t perfect.

Technical is a great example of an interesting attribute destroyed by flawed game balancing. The Perks here dig into the game’s crafting menu, which lets you craft and upgrade clothes and weapons. However, the gear game is built like a looter-shooter, which means that you’re constantly bombarded with new guns, melee weapons and clothing items every five minutes. You never, ever have to craft or upgrade a single thing because you’re constantly getting gear that outclasses your current outfit.

Even if you’ve found gear that you prefer cosmetically, and you want to upgrade them to keep your outfit from being under-leveled, the added stats you get are usually minimal. Cyberpunk 2077 is suffering from a resource problem, too. Each weapon you want to upgrade requires something like 10 different types of resources for no reason, making short work of whatever you’ve been saving up. Once you hit the late-game and start picking up really cool Epic and Legendary-level gear, you’ll need much rarer components to upgrade them. As if it wasn’t enough that gear costs so much to upgrade, the components you actually need for those upgrades are so damn hard to come by. All this, for… +10 armour? No thanks. 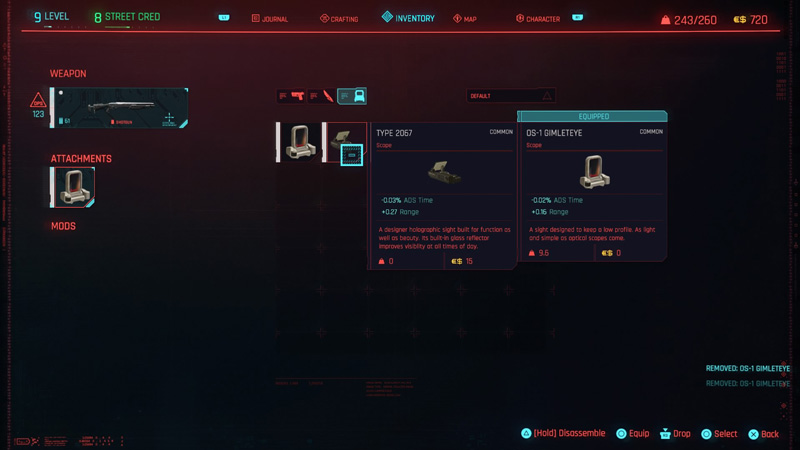 The gunplay was a pleasant surprise, at least. For a game with such a focus on RPG-like gameplay, the guns feel really great to use. A colourful variety of weapon types diversify your arsenal beyond categories like ‘shotguns’ and ‘assault rifles’ into stuff like ‘smart weapons’ and ‘power weapons’. Tech weapons can be charged up before firing, whereas smart weapons have auto-aim. There’s a satisfying level of punch to these things, especially the shotguns, which send enemies flying.

Melee combat on the other hand, feels awful. The game teaches you to properly utilise blocking and parrying in melee combat, but I found that most encounters devolved entirely into mindless button mashing. You can safely avoid these mechanics entirely and have more fun doing so, which is not a good look on their very inclusion. A wealth of expensive body mods are also available at various Ripperdocs across the city, and they can significantly impact the way you play this game in really interesting ways.

Adding to the intensity of combat is the excellent soundtrack that churns in the background, with energetic bass-thumping synths that drive each encounter. Night City’s various radio stations also do a great job of lending atmosphere to your late night cruises.

And... that's all the good bits done. It's time to talk about what makes Cyberpunk 2077 such an awful experience on consoles.

Write a Review
Compare This | Specifications
Lots of choices in navigating missions (stealth, combat, perks)
Body mods feel great
Night City is a gorgeous place to inhabit
Most side jobs are engaging and worth chasing
Keanu Reeves
Riddled with performance issues, bugs and glitches
Night City doesn't offer much in the way of interactivity
The story feels like wasted potential
Lacking in quality of life features such as character customisation, transmog and more
Traffic and enemy AI is terrible
Crafting system is unbalanced
Our articles may contain affiliate links. If you buy through these links, we may earn a small commission.
Sponsored Links