Review: Biped is an adorable co-op game, but it's way too short

Review: Biped is an adorable co-op game, but it's way too short 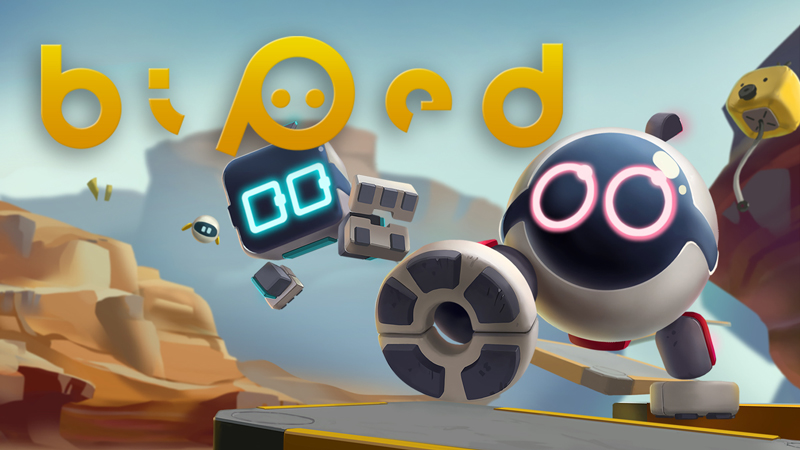 I love games about cute little robots, and this is certainly one of them. Players control Aku and Sila, two WALL-E-like robots on a quest to reactivate beacons around the world, which all went out after a storm. If these beacons are left unlit, travellers from all over the galaxy will be lost, and Gondor would fall. Or something like that.

One foot before the other 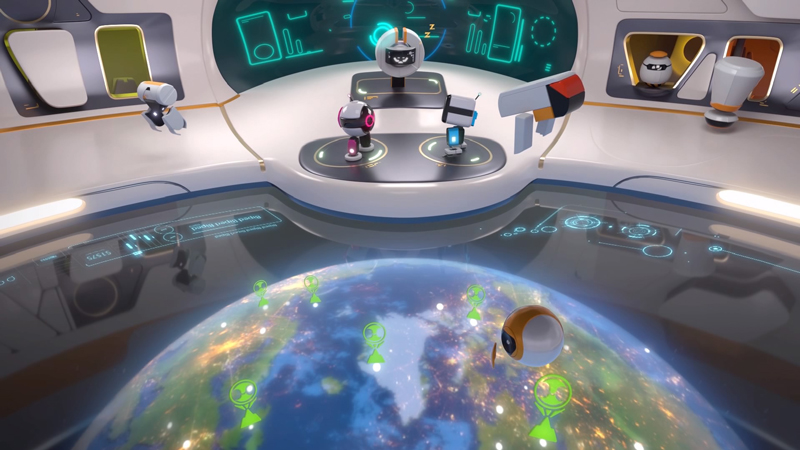 As you might’ve already guessed from its title, Biped involves you controlling a two-legged robot in platformer-style gameplay. You’ll have to make it through multiple obstacles to reach the end of eight levels, each of which have a beacon that needs activating. To spice things up, you’ll have to deal with a pretty funky control scheme when controlling these robots.

Each analog stick controls one of the robot’s legs, and you’ll have to alternate between spinning both sticks to move in any direction. In addition to that, you’ll often have to use their legs to interact with objects in the environment, such as levers. When doing so, you’ll have to stretch out a leg with one stick, and pull the lever down. You can also glide around using both sticks for much smoother movement, but even that is unreliable - you could just end up skating off a cavern. 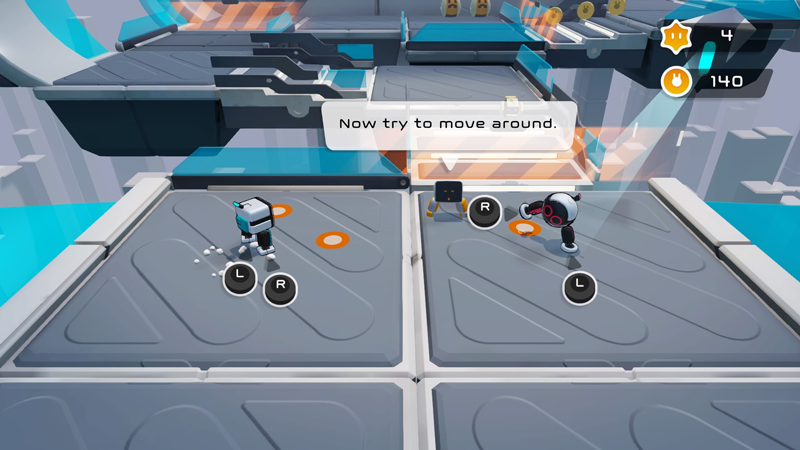 Biped’s strange movement is the beating heart of its gameplay. It’s slow and awkward by design, and will often lead to many frustrating mistakes during the more difficult platforming sections. Once the game decides you’ve got the basics down, it starts throwing harder puzzle elements at you, like floors that crumble and objects that need to be stepped on in a certain sequence.

Some will hate this method of movement, but it really is a lot of fun. It’ll take some getting used to, but the absolutely hilarious situations you’ll find yourself in with a co-op partner are worth all the stress and effort.

One is the loneliest number 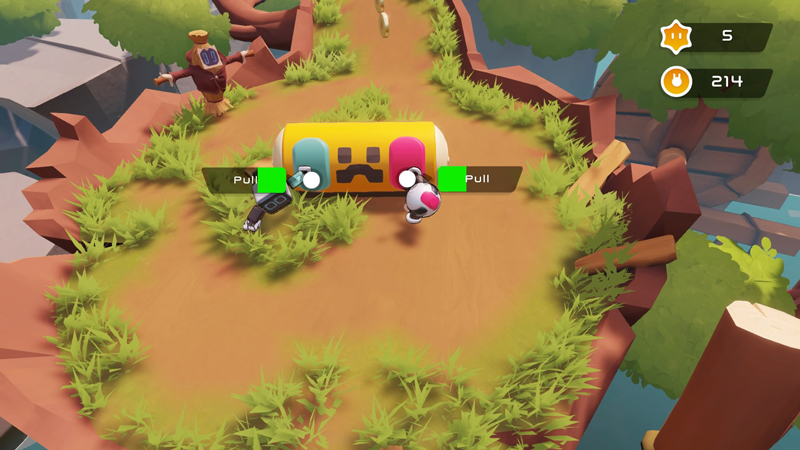 Biped can be played in both solo and couch co-op modes, with the latter being much more difficult. Co-op levels are packed with puzzles that rely on you cooperating with your partner and working in sync, as timing is often important to get over obstacles. That can be difficult when you and your partner keep falling off the map, or struggle to even walk from one end of the level to the other.

Ordinarily, I love playing couch co-op games with a focus on teamplay and timing (Overcooked is a great example), but this game's puzzles often fly in the face of its cutesy design. I was fully ready to recommend it to anyone struggling to keep their kids busy at home, but it is unbelievably difficult in co-op, with frustrating difficulty spikes peppered throughout the game. Don’t be fooled by Biped’s appearance - this isn’t a game for kids.

The PlayStation 4 version of this game also doesn’t support online co-op, which is a downright shame considering the current state of things.

This game is way too short 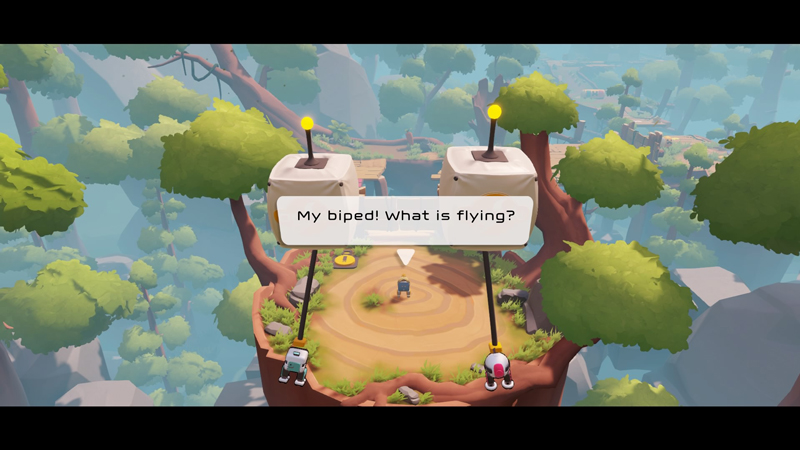 Now for the bad news. Biped can be beaten in under three hours - a shockingly small runtime for a game like this. It honestly feels like the game was just getting started with its mechanics before suddenly coming to an end. Granted, there are things you can do to extend your playtime - like collecting all the coins in every level, and completing optional challenges. This all makes for a very shallow post-game unfortunately, barely giving you any reason to come back after beating it.

The eight levels present in the game never outstay their welcome, but that’s only because they’re so short and generic. From the usual forest levels to water levels, this game really doesn’t do much with its environments to make them stand out from the crowd. Its visual style is pretty, at the very least. These levels aren’t exactly jaw-dropping, but vibrant and cartoonish visuals make them easy on the eyes. 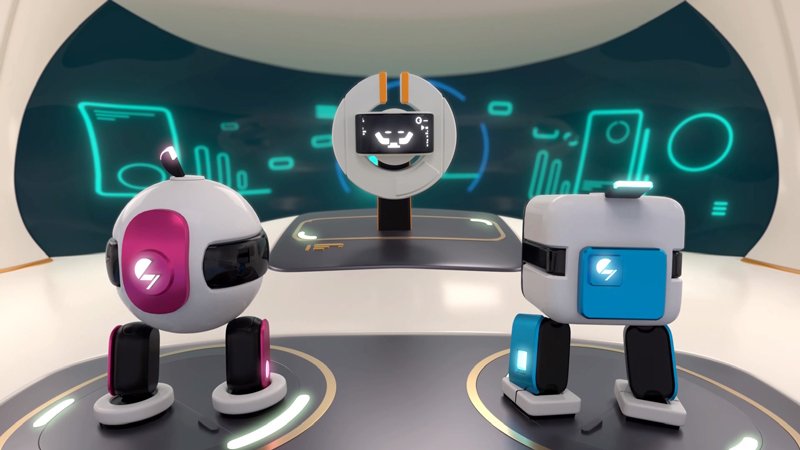 Biped is one of those rare examples of a co-op game that I found more fun to play alone. Its co-op puzzles aren’t structured very well, seemingly designed to elicit anger out of players, rather than a simple sense of fun. The game is also incredibly short, and doesn't take the time to properly flesh out its environments and puzzles. Wait for a sale on this one.

Write a Review
Compare This | Specifications
Visually pretty
Fun controls
Simple but satisfying puzzles
Way too short
Geared towards children, not much depth to it
Story is pretty generic
Puzzles aren't much fun to solve
Sponsored Links