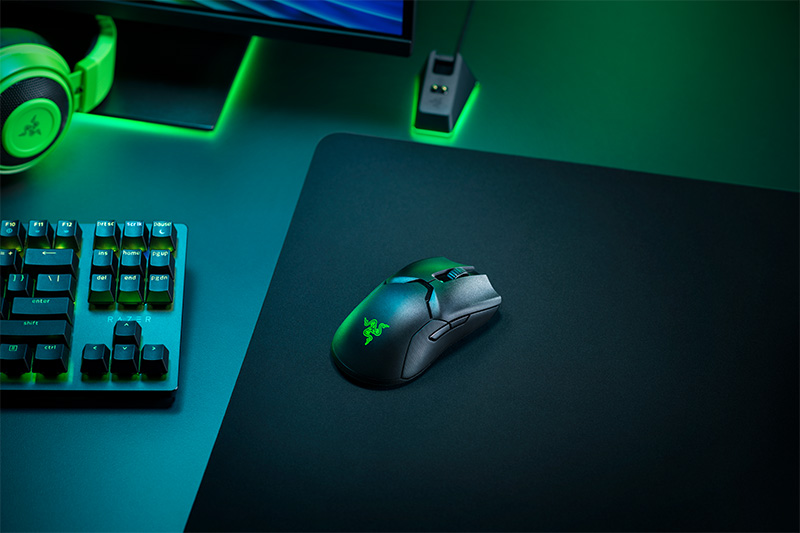 Razer has been on a roll in 2019, trotting out some of the best gaming mice and keyboards I've seen in the form of the rebooted Viper and Huntsman Tournament Edition keyboard. The Viper Ultimate is just the latest addition to the company's already impressive recent record, improving on the Viper in key ways and most notably cutting the cord.

But while many wireless gaming mice tend to be ponderously heavy, the Viper Ultimate weighs a sprightly 74g – not super light in a world where wired mice in the 50g range exist, but really good for a wireless mouse. After all, wireless mice have to contend with the added weight of a battery and receiver, and they often weigh well over 100g. The closest competitor to the Viper Ultimate is probably the Logitech G Pro Wireless, which tips the scales at 80g. 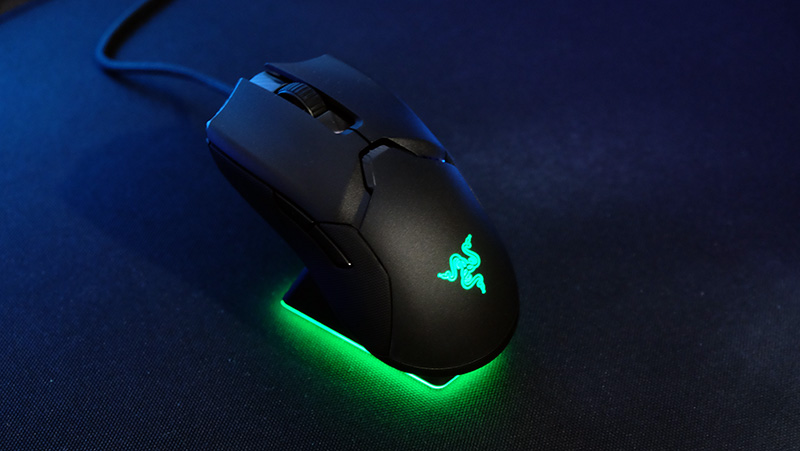 To my knowledge, the Viper Ultimate is the lightest wireless gaming mouse around, and it makes a good case for being one of the best. Razer didn't stop at just tossing the cable on this mouse. It's crammed in a new 20,000DPI sensor and put better skates on it, so it's a bit more than simply a wireless version of the original Viper.

The Viper Ultimate shares the same shape as the Viper I reviewed previously, which means it's also a low-profile and oblong mouse reminiscent of the Zowie FK1. I find it best suited for the fingertip grip, but only if you have large hands. The tallest point of the mouse is located somewhere in the middle, and the Viper lacks any prominent hump to support your palm. That may feel less comfortable if you have large hands and want to palm or claw it, but I think it'll work better if you have smaller mitts. 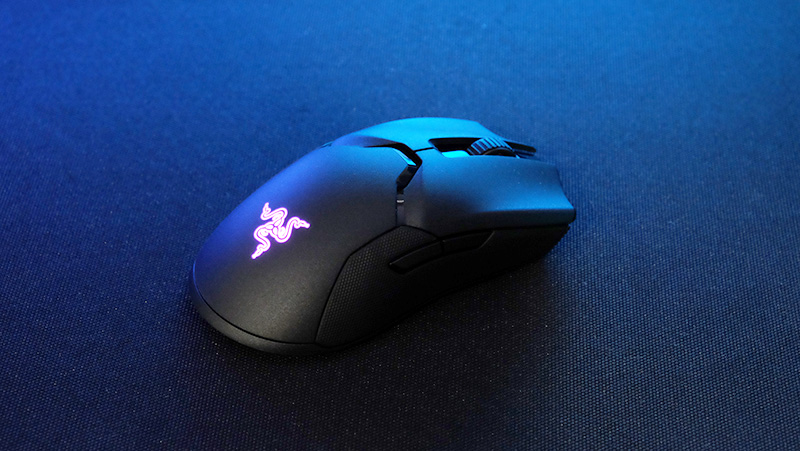 Nevertheless, for someone whose hands measure 16.5cm from the base of the palm to fingertip, the Viper is still a bit too large for me. I can use it just fine, but I'm really more comfortable with something like the Finalmouse Ultralight 2. I recently switched over to using the fingertip grip, and the length of the Viper – it measures 126.7mm long – makes it such that there's not a lot of room to work with when you want to make micro-adjustments such as pulling down the mouse.

That aside, the ambidextrous shape of the mouse has a pretty good chance of appealing to the masses, and there are also programmable side buttons on both sides for left- and right-handers.

Like the first Viper, the Viper Ultimate also uses optical switches for mouse buttons 1 and 2. In theory, this means faster actuation – the switch doesn't rely on metal contacts so there's no need for any debounce delay. When you click the button, the switch simply opens its shutter to allow an infrared light beam to pass through, and your PC then registers the click. However, as I noted in my review of the Viper, the optical switches don't feel tangibly faster, and they do more to make you feel good about owning a piece of more advanced technology than actually helping you step up your game. 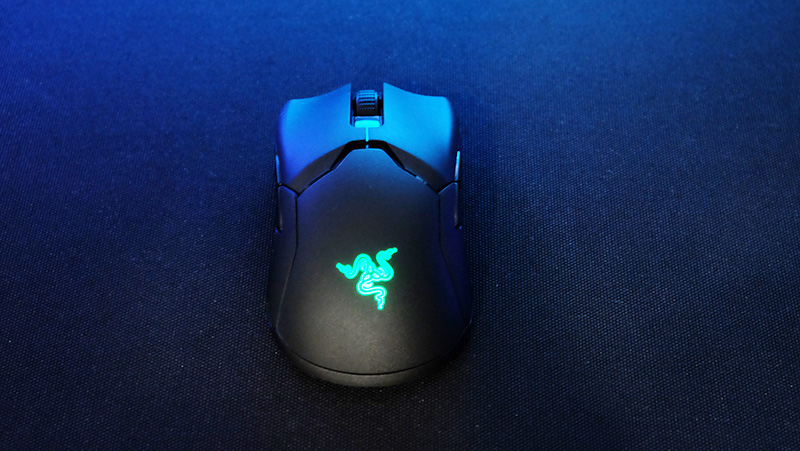 Nevertheless, the switches feel crisp and responsive, and I've no complaints about them. There's some side to side wobble of the buttons, but that's present to some extent on most mice that separate mouse buttons 1 and 2 from the shell. Fortunately, the wobble isn't excessive and you don't notice it when using the mouse normally.

Other than that, build quality on the mouse is good and there's no flexing when pushing on the sides. The mouse is also only 5g heavier than the wired Viper, and at 74g, it still feels really light and nimble in hand.

The side buttons are springy and have good feedback, but they're still a little too flush with the side of the mouse, which makes them slightly hard to press. I usually do this with the side of my thumb, and it really helps if the buttons stick out a bit more. 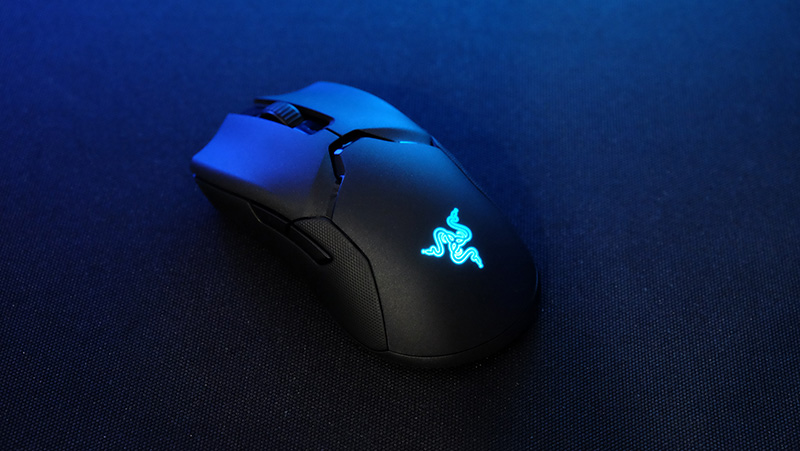 The scroll wheel also has tactile, well-defined steps. It isn't too noisy either, and it's one of the better scroll wheels I've seen on a gaming mouse.

Finally, the Viper Ultimate also fixes the scratchy mouse feet that came on the Viper. These are now pure PTFE and are a lot smoother than before. 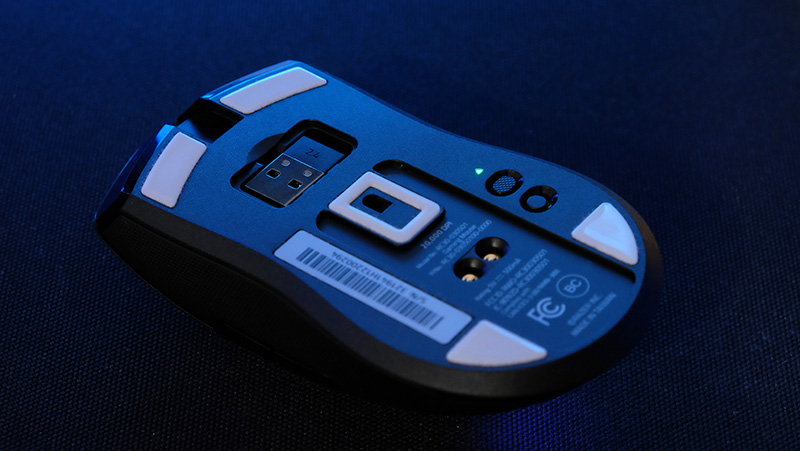 One of the biggest changes Razer made to the Viper Ultimate is the addition of its new Focus+ optical sensor. This is a 20,000DPI sensor developed together with Pixart, and it comes with a few new features that help the mouse adapt to different surfaces. The first is something called Smart Tracking – it automatically calibrates the sensor for the particular surface you're using it on. Previously, you'd need to install Synapse 3 and manually calibrate the sensor. The next feature is asymmetric cut-off, which lets you set the distance at which the sensor resumes tracking when you lift the mouse off and set it back down. Finally, there's Motion Sync, which syncs the sensor's signals at the same intervals that your PC extracts information. This supposedly gives your PC the most updated position of the mouse.

That said, I don't think these features make a lot of difference in practice. Tracking on the Viper Ultimate feels flawless, but that's just what you get on other top mice today that have a PMW 3360 sensor or some variant of it.

Synapse 3 will let you configure up to five sensitivity stages, and there's also a colour-coded indicator at the bottom to show you what stage you're on. The DPI button is at the bottom too so you won't hit it accidentally. 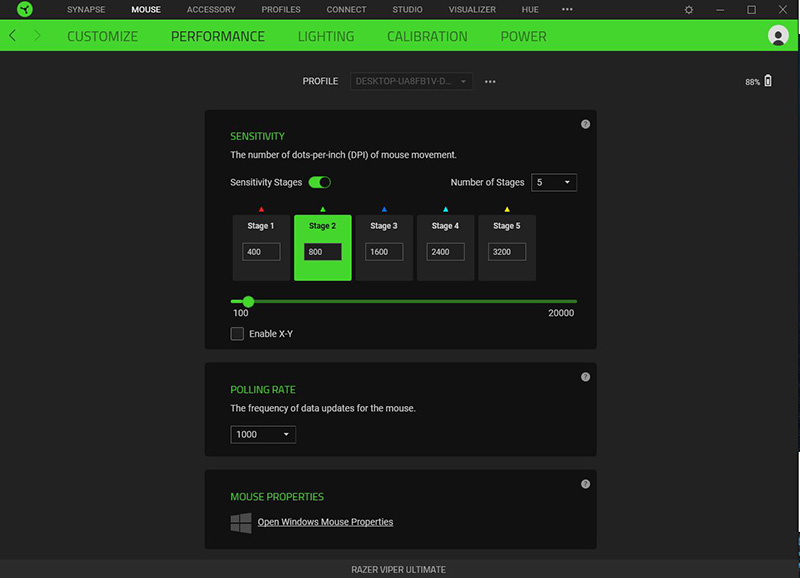 Wireless performance is the bigger highlight. Logitech and Razer both seemed to have nailed getting a wireless mouse to feel just like a wired one, but it's always nice to see a new cordless mouse with none of the drawbacks like lag. The Viper Ultimate feels every bit as reliable and responsive as every other wired mouse I've tried. 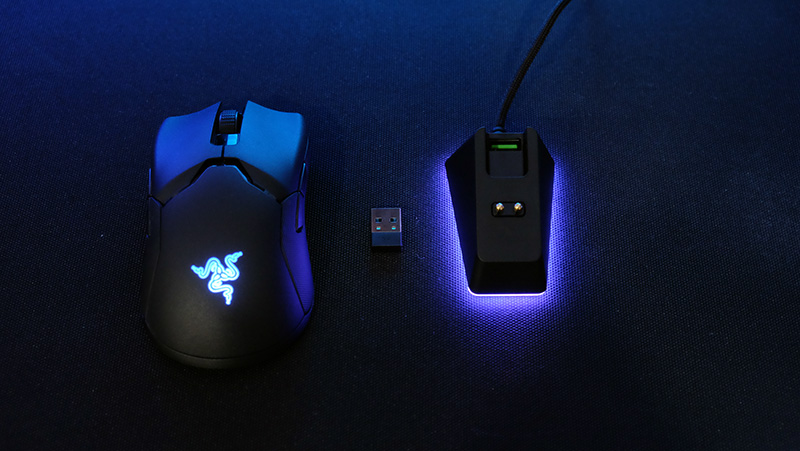 Battery life is rated at 70 hours, according to Razer, but that'll of course depend on things like the LED brightness and effects you pick. In my time using it, the battery dropped roughly 25 per cent in 12 hours (a lot of which was spent gaming) with brightness set at 50 per cent and the effect set to spectrum cycling. If you want the mouse to last longer, just turn off the LEDs.

The Viper Ultimate also ships with its own charging dock, which comes ringed with an attractive LED strip at the bottom. When docked, the Razer logo on the mouse will also change colour to indicate the battery level and charging status. You can pop the wireless dongle into the USB slot on the dock as well, and it uses the same detachable Speedflex cable as the mouse. 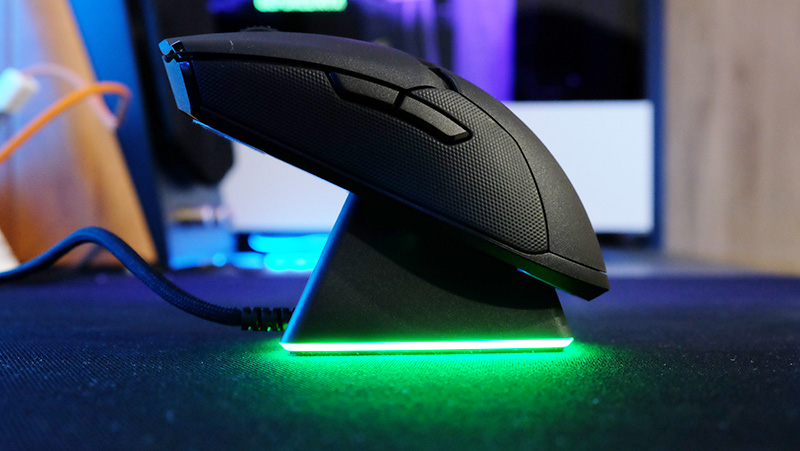 This is the same cable that the original Viper used, and it's a lot more flexible and supple than your usual stiff braided cables. It's a little stiffer than the cable on some other mice, but it's still a really good one. You can plug it directly into the Viper Ultimate to charge it too or if you just want to use it in wired mode. 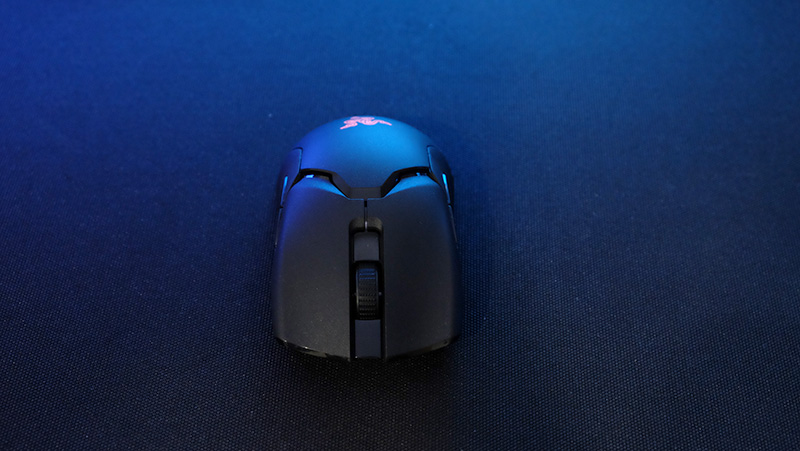 That said, the Viper Ultimate could just be the best wireless gaming mouse you can get today. It's very expensive at S$239.90, but the G Pro Wireless still costs a bit more at S$249 and doesn't come with a dock. The Viper Ultimate trumps it in many other ways too – it's got a better cable, a more advanced sensor, and is lighter. Wireless freedom comes at a steep premium, but the Viper Ultimate makes it worth it.

Write a Review
Compare This | Specifications
Flawless 20,000DPI Focus+ optical sensor
Excellent wireless performance
Truly ambidextrous design for both left- and right-handers
The lightest wireless gaming mouse around at just 74g
Good battery life
Very expensive
Side buttons are too flat and a little hard to press
Not the best for small hands
Our articles may contain affiliate links. If you buy through these links, we may earn a small commission.
Sponsored Links