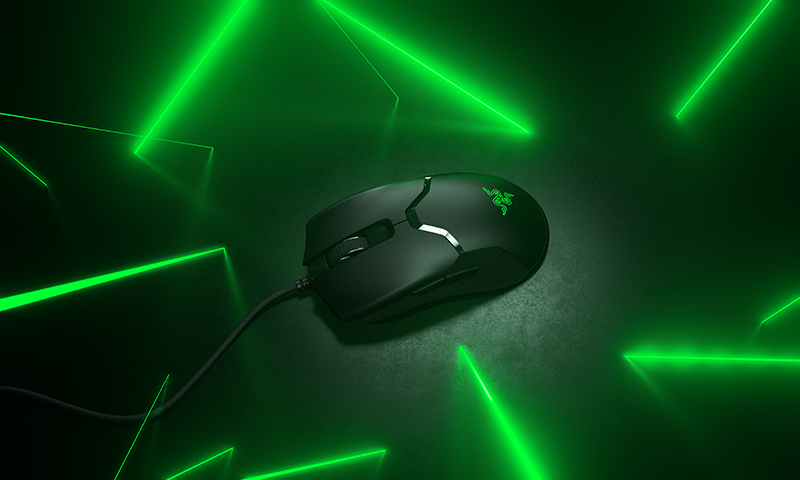 I suppose it was only a matter of time before it happened. With so many players experimenting with so-called ultra-light mice, the question was when, rather than if, Razer would catch on. The Razer Viper is Razer's lightest wired mouse to date, and it may be the first mouse from the company in a long while to really demonstrate a serious focus on professional gamers.

I'm just going to define this category of ultra-light mice as anything under 70g. It's already a fairly crowded space, including mice like the Finalmouse Air58 Ninja, the Glorious Model O (and soon to be released Model O-), the lesser known G-Wolves Skoll, and the upcoming Cooler Master MM710. On top of that, there's also Xtrfy's Project 4 mouse and a slightly absurd-looking carbon fiber mouse from German outfit Zaunkoenig. But with the exception of the Zaunkoenig mouse, which looks like it just got its ass loped off, all the mice share one thing in common. They're all shot through with holes. 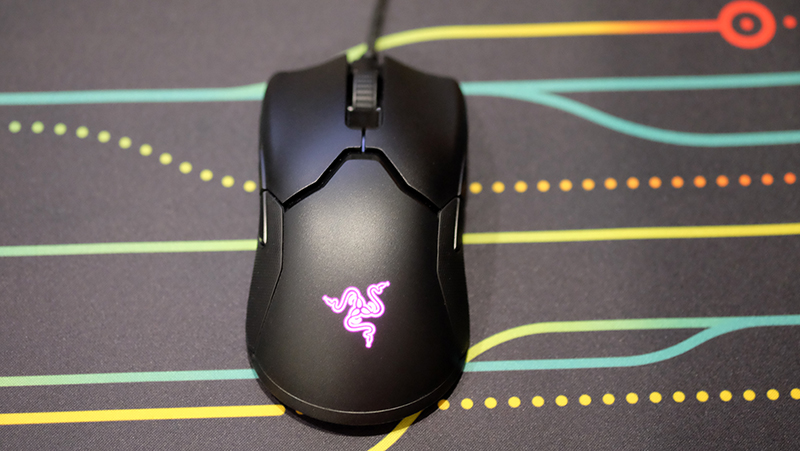 At 69g, the Viper has just squeaked into the ultra-light category, but its shell is blissfully solid. That's great news for trypophobia sufferers everywhere, and the Viper looks just like a regular mouse. In fact, it's only 2g heavier than the Model O, a barely perceptible difference that I don't think is humanly possible to discern. It's managed that with a solid shell, which is pretty impressive, and it feels just as agile and nimble in hand as the Model O. The mouse feels like just regular plastic though, and Razer didn't specify if there was anything special about the material it used.

I'm firmly in the camp that believes that a lighter mouse is much easier to control and make flick shots with. I haven't quite decided how light is too light, but even the 58g Air58 felt great in hand. Of course, you may disagree, in which case there are still plenty of other mice out there that might suit you better. 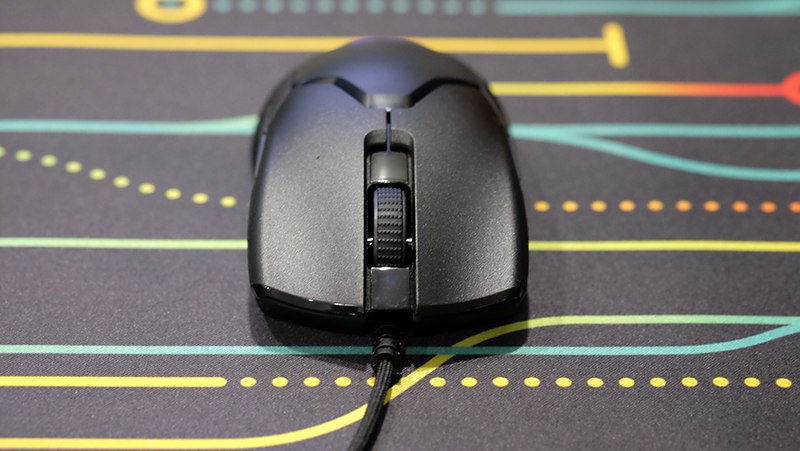 That said, having used both the Air58 and Model O, I feel like the solid shell of the Viper isn't markedly more comfortable than the perforated shells of the former two mice. But if you're still worried about somehow getting a honeycomb pattern etched into the flesh of your palm (unless you have a vise-like grip, I'm pretty sure this doesn't actually happen) or dust getting into the mouse, the Viper is shaping up to be a worthy alternative.

The original Razer Viper that was released in 2004 was Razer's first optical mouse. It only supported up to 1,000DPI – gasp – but it was significantly lighter than existing ball mice of the time, including the legendary Boomslang. As a result, it seems fitting that Razer is bringing back the Viper name for a mouse that makes a similar leap forward in terms of weight, technology, and design.

One of the biggest upgrades that Razer is touting on the Viper is the use of optical mouse switches, similar to what it did with the Huntsman Elite keyboard. Unlike traditional mechanical switches that rely on pieces of metal to make contact in order to register a click, the Viper's switches rely on light. This means that there's no need to implement any sort of debounce delay, resulting in actuation times that are, in theory, up to three times faster. 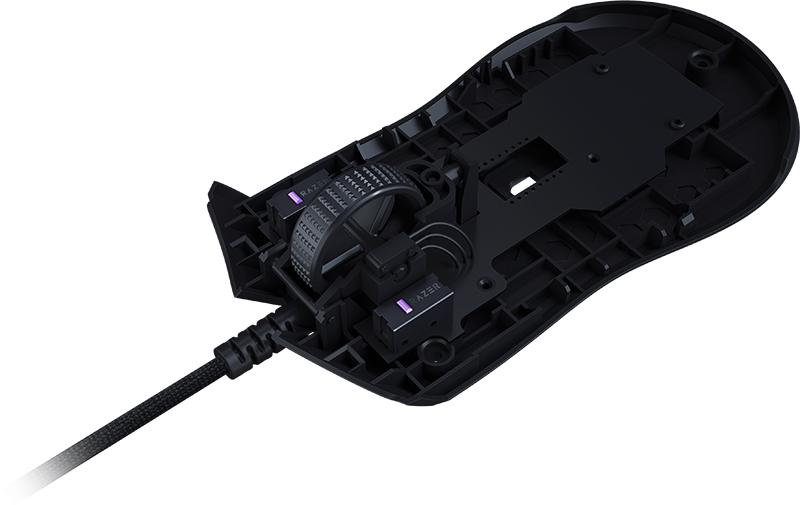 It works by passing an infrared beam through a shutter to fire an electrical signal to the computer, and because there are no metallic contacts to wear down, the switches are also supposed to last longer.

In practice, I can't say that there's actually a tangible difference. While I definitely think that optical switches are a nice step forward, they shouldn't be the reason you buy this mouse. Buy the Viper because you like its design or shape, not because the switches will help you react faster.

Then there's Razer's new Speedflex cable, which comprises a low-drag cable covering that results in a cord that is more supple than the company's existing braided cables. While the cords on the Air58 and Model O still feel slightly more flexible, the Speedflex cable is probably good enough for most people. At the very least, I didn't feel much drag when making large, swiping movements.

The cable is also narrower and neater in appearance than the ones on the Air58 and Model O. The cable on the latter two is really, really flexible, but the cord has an uneven appearance that puffs out in certain areas. In comparison, the Speedflex cord has a tighter covering and is also narrow enough to fit into my Zowie Camade mouse bungie (I had trouble with this on the Model O). 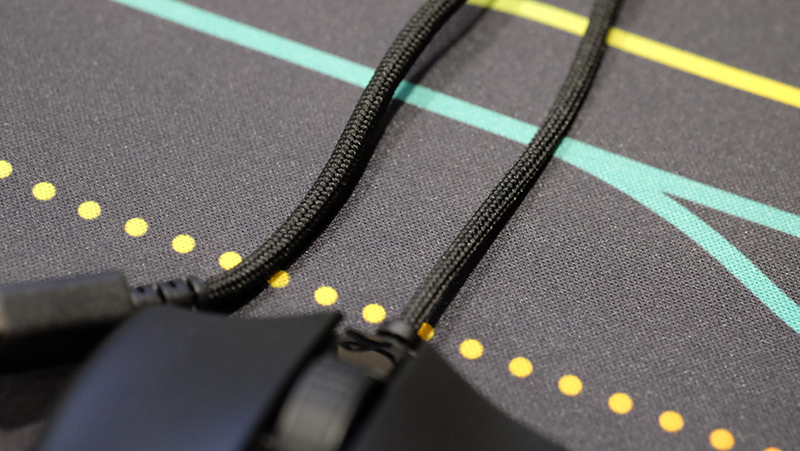 However, one odd thing I noticed was that the section of cable closer to the USB end was softer than the portion that came out of the mouse. It seems like the cable covering gets looser toward the end, and it'd have been nice to see this implemented throughout the cable with greater consistency.

The Viper uses the same 16,000DPI PixArt PMW3389 optical sensor as the Razer DeathAdder Elite. That sensor is pretty much regarded as flawless, which means no jitter, acceleration, or prediction. I was also unable to make the mouse spinout even when swiping really fast, so you shouldn't have any issues with tracking on the mouse. 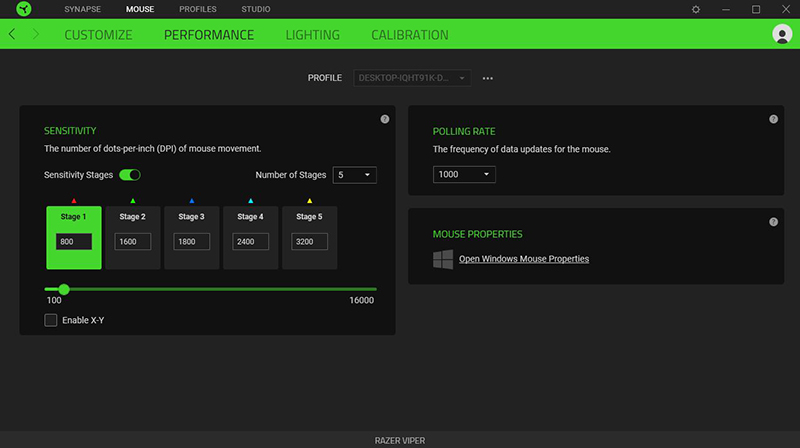 Razer will let you set up to five DPI stages in the Synapse 3 software (first featured in our Razer Cynosa Chroma review), and a color-coded indicator at the bottom of the mouse will tell you what sensitivity stage you're on. You can also remove stages if you don't need all of them, so you can toggle between, say, just two DPI options. The DPI toggle button is located on the bottom of the mouse, which avoids the risk of hitting it accidentally. 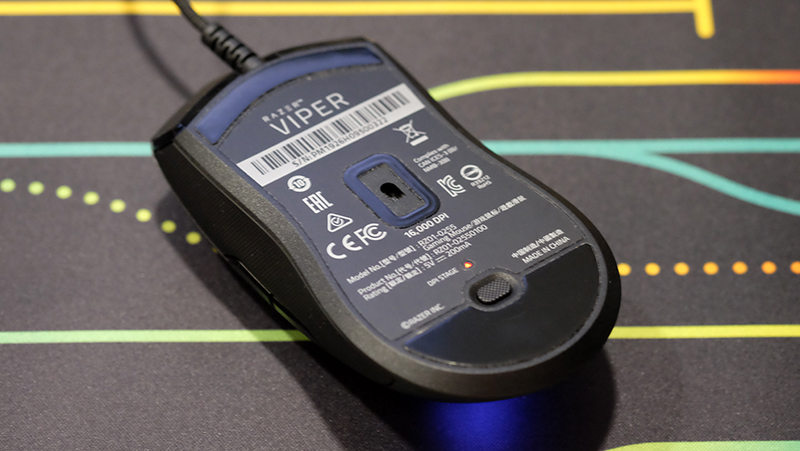 The Viper features an ambidextrous shape with two programmable side buttons on both sides, which means it'll work for left-handers as well. The rubberized side grips provide some nice texture, and they seem like they'll be good if you have sweaty palms. The side buttons provide surprising resistance and travel as well, but I like how crisp and solid they feel. 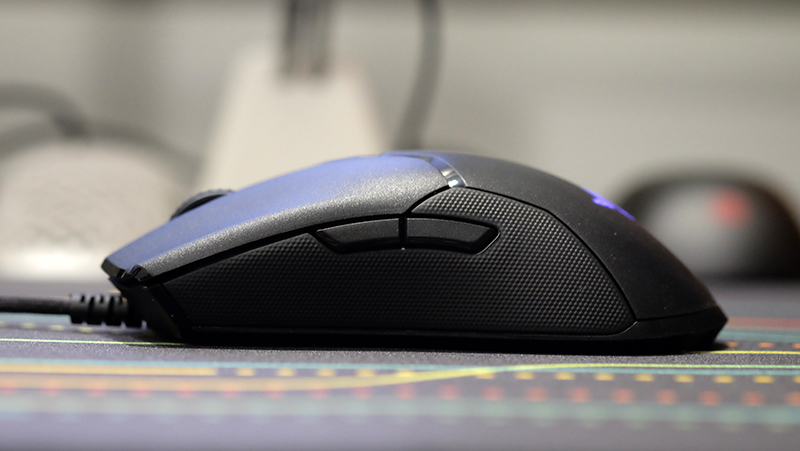 Razer's mouse measures 126.73 x 66.2 x 37.81mm, which is pretty similar to both the Model O and Zowie FK1. If you liked both those mice, you'll probably like the Viper. I'd describe it as long and kind of flat. There's no prominent hump for you to cup, but I was still able to palm the mouse quite comfortably. My hands measure 16.5cm from the base of my palm to my fingertips, so the Viper is a little too large for me, but that's no fault of the mouse. If you have larger hands, you should be able to use claw or fingertip grips with the mouse as well. 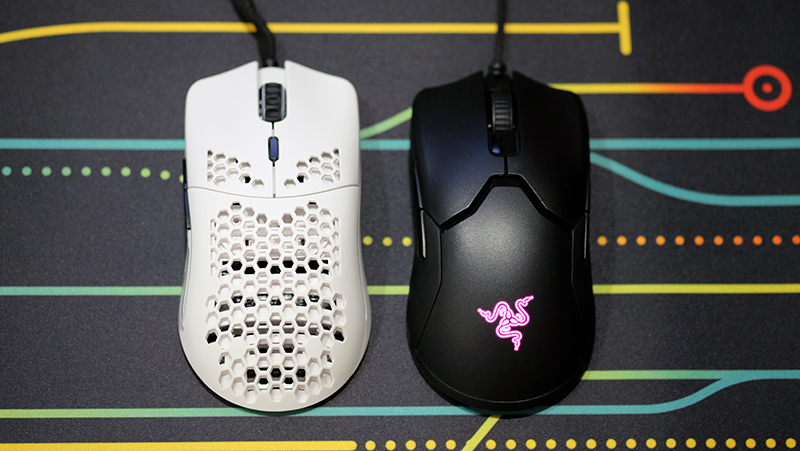 If there was one thing I could change though, that would be the sharp edge of the mouse. The base of the mouse and top shell curve toward each other and form a sharp edge that encircles the mouse. It's worth pointing out that Zowie deliberately smoothed out the edges on the base of its S2 mouse to prevent it from digging into your palm, and that's what Razer should have done here as well. The edge didn't pose a super big problem, but getting rid of it would have made the mouse ever so slightly more comfortable.

Elsewhere, the primary mouse buttons and scroll wheel are also pretty good. They offer decent feedback, and while the scroll wheel does make some noise when you scroll really fast, it's still far more quiet than the squeaky messes on Zowie mice. I also like that the left- and right-click buttons are separate from the main body of the mouse. I find that this provides more consistent clicks and is also more durable since the entire mouse body doesn't have to flex every time you press a button.

One final thing I'd like to call attention to is the mouse's glide. Despite being more expensive than the Model O, the Viper's stock feet don't feel as good. There's a slightly scratchy feeling when gliding across the mousepad that isn't present on the Model O. This might go away with time after the feet have been broken in, but I haven't used the mouse for long enough to know yet. If you want to make this your main mouse, I'd definitely see about swapping out the feet.

Razer is asking for S$124.90 for the Viper, and it's available to buy right now.

The price isn't as competitive as Glorious' S$99.99 price tag on the Model O, but it's still something I think most people will be able to accept. The Viper may just be Razer's best mouse yet and a treat for fans of competitive shooters. It has an excellent sensor, a shape with broad appeal, and a really light chassis. Despite all the hype over super light mice like the Model O, I think there might still exist a significant number of gamers who remain discomfited by the amount of holes in those mice. If that's the case, the Viper is perfectly positioned to welcome these folks into its arms.

Write a Review
Compare This | Specifications
Lightweight design without honeycomb shell
Flawless optical sensor
Good build quality
Flexible cable and optical switches
Sharp edges around mouse
Cable not equally flexible throughout its length
Our articles may contain affiliate links. If you buy through these links, we may earn a small commission.
Sponsored Links