Razer Viper Mini review: Is this the best mouse for small hands?

Razer Viper Mini review: Is this the best mouse for small hands? 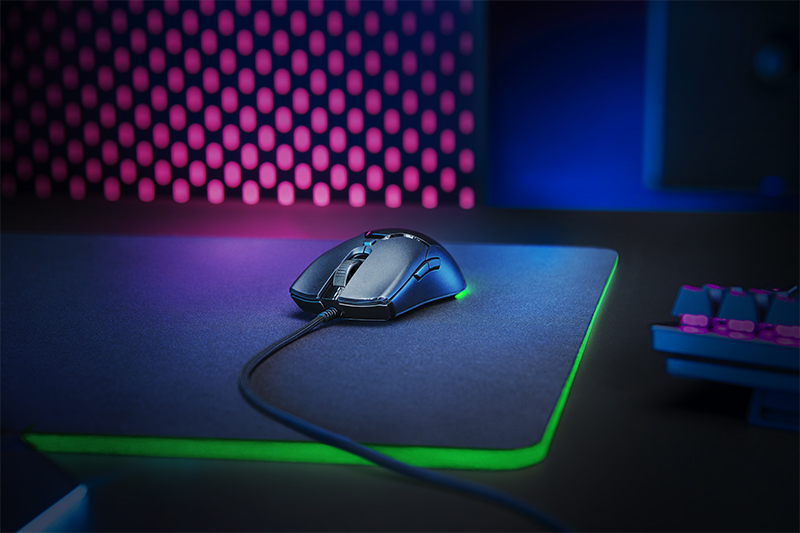 A Viper for tiny hands

Today, Razer literally answered my prayers for a smaller mouse. The Viper Mini is a smaller version of the Viper, which together with the Viper Ultimate, is among the best gaming mice to come out in 2019. The larger Viper mice are both equipped with features that all the top gaming rodents possess today, including a soft and supple paracord-style cable and ultra-lightweight design. However, they stood out from the crowd because of the lack of holes in the mouse shell, which meant they looked better and were also slightly more comfortable to use.

The Viper Mini brings all of that to a smaller form factor, and it's truly a godsend for those with smaller hands. While I personally thought the Viper was a great mouse, I never made it my daily driver because of how big it was. Razer says explicitly that the Viper Mini is designed for those with hands measuring under 17cm, which means that it's targeted at a very specific subset of people. Some will likely find the Viper Mini too tiny, but that's not really an issue since Razer already has them covered with the Viper.

I'm not alone in asking for a smaller Viper either, and there are a handful of Reddit posts already asking for an Ultralight 2-sized Viper. Well, here it is.

A sacrifice for the Razer Viper Mini. from r/MouseReview

I'm not sure what's going on behind the scenes at Razer, but I feel like the company has really sat up and listened to what gamers want. That's evident in the Huntsman Tournament Edition keyboard, and it's evident here in the Viper Mini and in last October's Viper Ultimate. The latter improved on the scratchy feet of the first Viper with much slicker pure PTFE feet, and those improvements carry over to the Viper Mini as well. 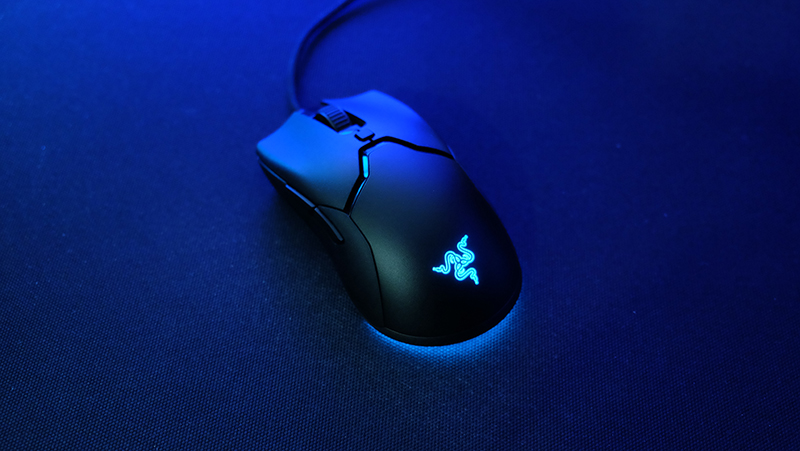 The Viper Mini comes with two large feet at the top and bottom, which glide smoothly right out of the box. In fact, I find them a bit smoother than the Corepad feet I installed on my Ultralight 2.

At 61g, the Mini is even lighter than the 69g Viper, but it still isn't quite as light as competitors that have had holes punched into their shells, such as the Cooler Master MM710, Glorious Model O-, or even the Ultralight 2 itself. The Viper Mini is 14g heavier than the latter, and you can feel the difference when switching between the two. However, I don't think it makes much of a difference in terms of your actual performance in game, and I was able to jump straight in with the Viper Mini with no adjustment required whatsoever. 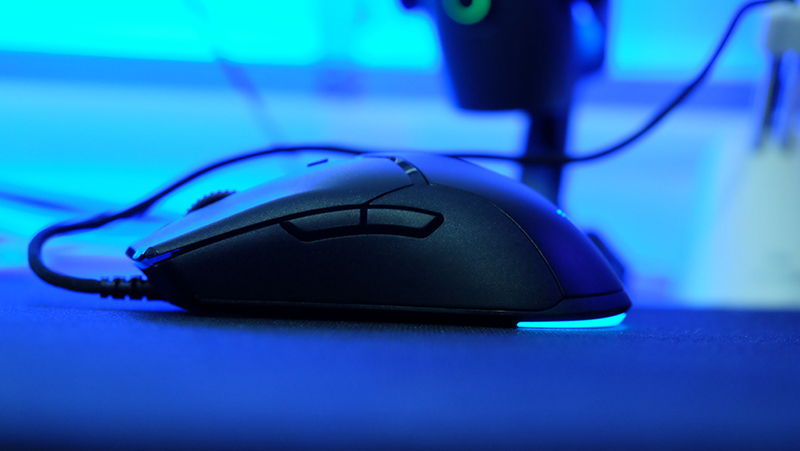 The Mini is obviously supposed to be a smaller Viper, but it reminds me more of the Ultralight 2 and the two have a very similar shape as well. The main difference is that the Ultralight 2 is flatter, measuring around 35.8mm at its tallest point to the Viper Mini's 38.3mm. The Viper Mini fills out your hand a little more, so it's better suited to the palm grip than the Ultralight 2, although it still works great for the fingertip and claw grips. On the other hand, the Ultralight 2 is more specifically tailored for the latter two grip styles.

I use the fingertip grip, and I have no problems with this on the Viper Mini. It's short enough so I can still make micro-adjustments with my fingers and pull the mouse down without it coming up short against my palm. 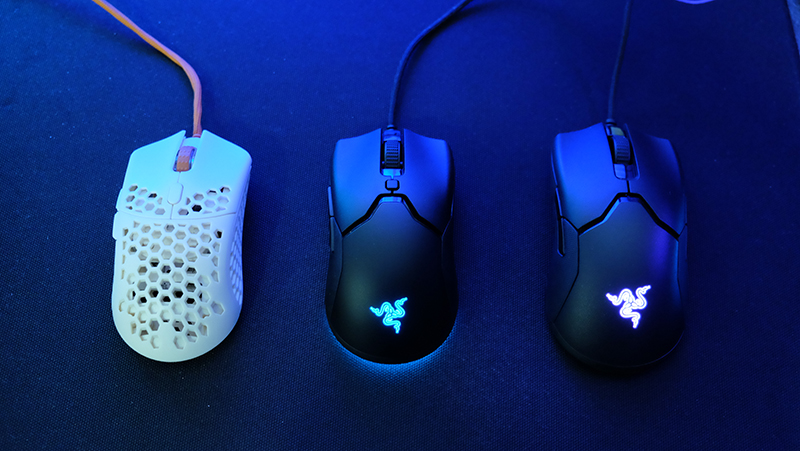 The Viper Mini also feels slightly wider than the Ultralight 2 at the rear. This is a small difference, but it makes it slightly more comfortable to use the fingertip grip on. And when compared to the Cooler Master MM710, which is the other tiny mouse on the market right now, the Viper Mini feels vastly different. Cooler Master's mouse is short, but it has a very prominent hump that shows that it is designed more for the palm and claw grip. Glorious's mini offering, the Model O-, feels more similar to the Viper Mini, but it is still too long at 120mm. 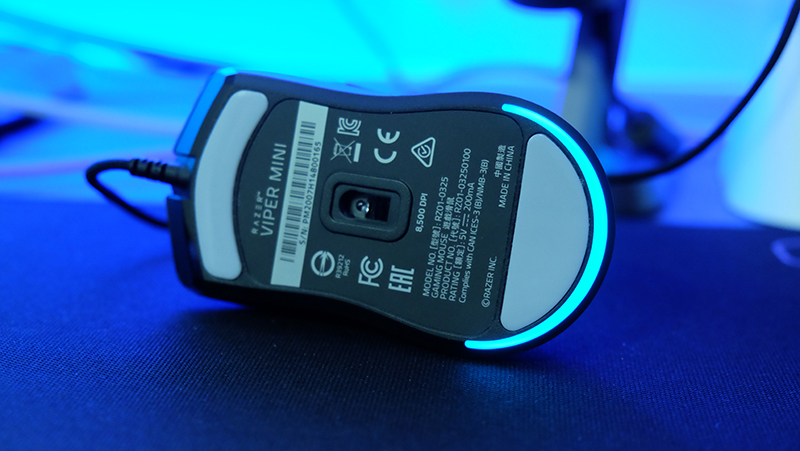 The Viper Mini also ditches the ambidextrous side buttons on the right side, catering specifically to right-handers this time.

Razer says the mouse 1 and 2 buttons have been improved as well to better mimic the feel of mechanical switches. These are still optical switches that use light to register a press, but they're different from the ones used on the previous Viper mice. For one, they're rated for 50 million clicks instead of 70 million. As for the upgraded click feel that Razer is citing, the difference is extremely minuscule. They are crisper and less springy, but I'm honestly not sure I'd have thought this worth mentioning if Razer didn't point this out. 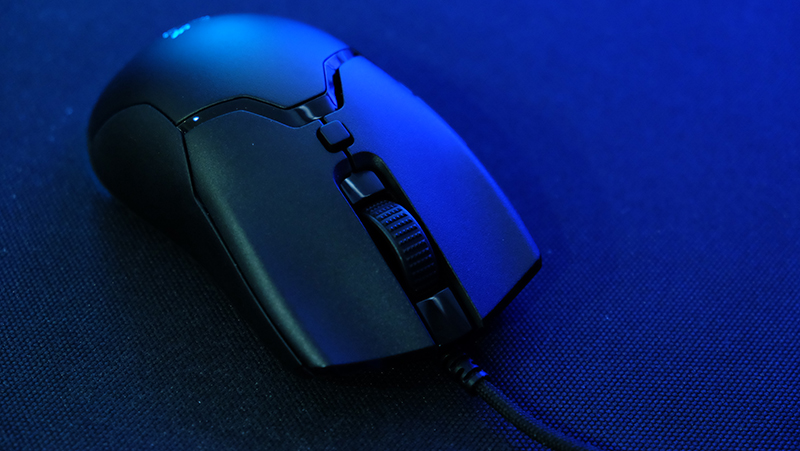 That said, they are still nowhere as clicky as the Kailh GM Red switches that some in the modding community like to install on their mice.

There are comfort grooves on the buttons too, but they're not so aggressive as to force you to hold the mouse in any particular way.

I've also been over the benefits of optical switches before, and I don't think you should be setting much store beside their claims of faster actuation. The theory behind them is solid, and yes there is no need for a debounce delay, but you're not going to notice this in game. Instead, the bigger benefit is probably what they bring to the table in terms of durability and reliability, since there are no longer any metal contacts to wear down. 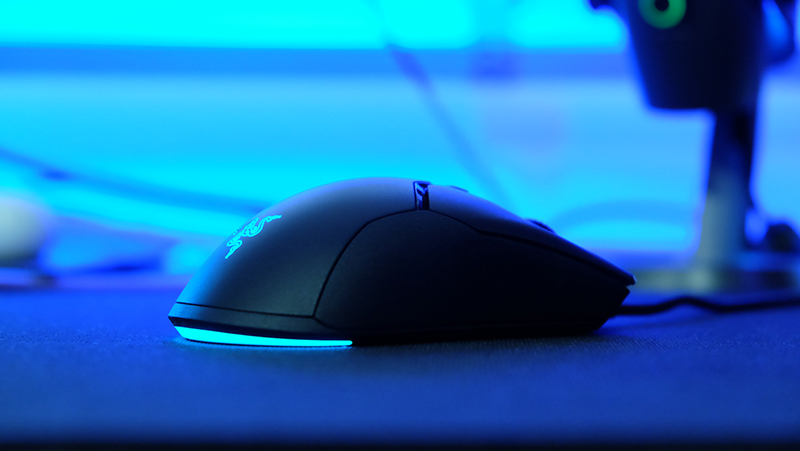 The Speedflex cable is the same as the one on the Viper, but it does feel ever so slightly more flexible. You're able to use this without a mouse bungee quite comfortably, although it's still my personal preference to have one since it makes everything a bit neater.

Build quality is excellent, and there's no flexing when pushing on the sides or top of the mouse. The mouse 1 and 2 buttons show minimum wobble as well, and they're separate from the mouse shell. The scroll wheel has just the right amount of resistance, offering clearly defined steps while still being pretty quiet. 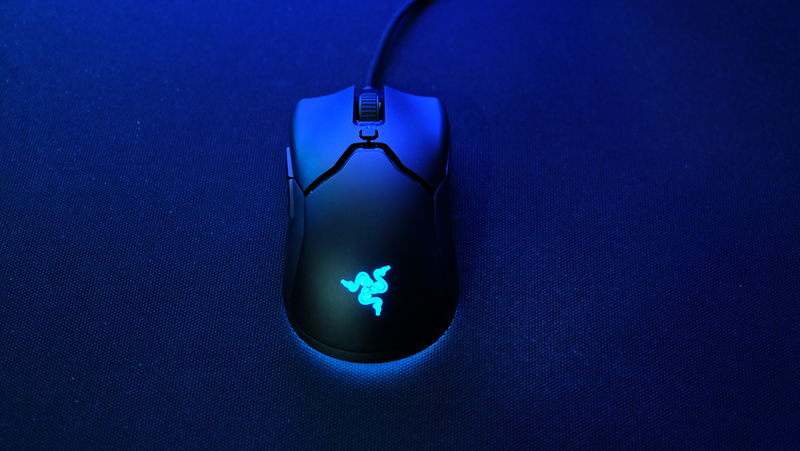 The DPI button has been moved from the bottom of the mouse to sit just below the scroll wheel. It's a tiny square that doesn't really get in your way, so I think there is little chance of hitting it accidentally. You might miss the colour-coded indicator on the original Viper, but I think most folks usually just set their mouse to their usual DPI and forget about it.

The Synapse 3 software will let you save up to five DPI stages, which you can store in the onboard memory. The lighting profiles won't carry over however, and you'll still need to install Synapse 3 on a new PC to access your lighting settings. I'm not really sure why this is the case, and I'd really have liked to be able to set my sensitivity and lighting preferences and not have to load up Synapse every time I power on my PC to just get the mouse to light up in the colour I want. 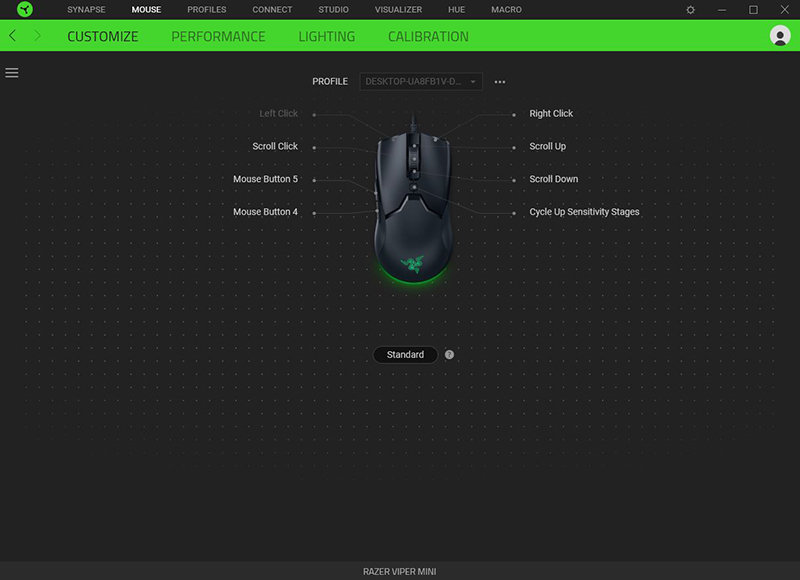 Compared to the Viper, the Viper Mini also gets some extra RGB LEDs in the form of a cool underglow strip. However, this isn't treated as an independent zone in Synapse 3, and you can't configure it separately from the Razer logo.

Finally, Razer has put a new 8,500DPI optical sensor in the Viper Mini, which is rated for up to 300 inches-per-second (IPS) and 35G of acceleration. There's no indication whether this is based on any particular PixArt sensor or Razer's own design, but I didn't notice any issues with it after several hours of Modern Warfare over a couple of days. I'm a pretty low-sensitivity player and require around 43cm to make a full 360° turn, but I had no issues with the mouse spinning out. As far as I can tell, tracking is flawless, with no prediction or acceleration either. 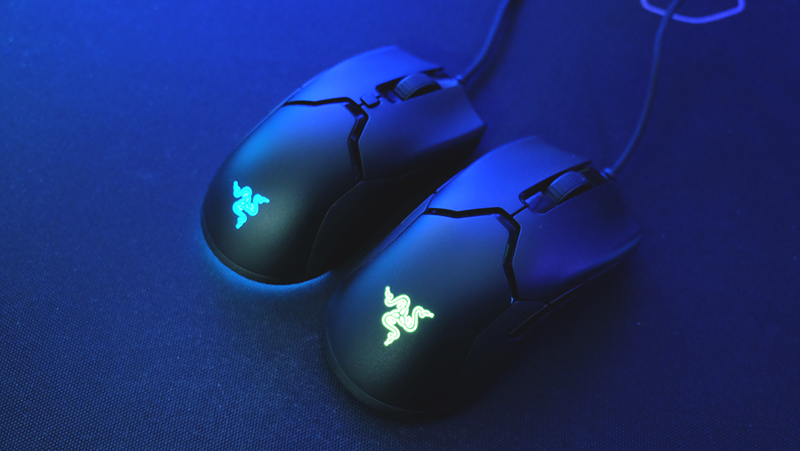 The Viper Mini is very much a product of the time, hewing closely to the prevailing trends in gaming mouse design. That's a great thing to see, because Razer may just have put out the best gaming mouse available now for small hands, or those who just prefer smaller mice. It has a safe, ambidextrous shape that works well with the three most popular grip styles, and I'd be really hard-pressed to find a serious flaw with it.

It may not be the lightest mouse around, but when you're in 60g territory, it hardly makes much of a difference. What's more, there's no doubt that a mouse with a solid shell feels and looks better than one that is shot through with holes.

My one gripe would be the way Razer seems to be cutting costs on the mouse, such as with the lower-rated optical switches and a different sensor. To be fair, these things aren't something you'd notice in real-world use and these decisions have allowed Razer to price the mouse at an extremely attractive S$63.90, but it'd just have been nice to see it go all out with a premium mouse for tiny hands.

I can't really argue with a price like that though, and it's cheaper even than the Glorious Model O- and Cooler Master MM710, while offering more features and feeling better made in every way. If you're on the hunt for a small mouse like the Ultralight 2, it doesn't get much better than the Viper Mini.

Write a Review
Compare This | Specifications
Cheaper than its competitors, while offering more features
Soft and supple cable
Optical mouse switches
Lightweight design without honeycomb shell
Good build quality and design improvements over the original Viper
Not for everyone given its small size
Onboard memory only stores sensitivity settings; Synapse 3 still required to load lighting and macros
Our articles may contain affiliate links. If you buy through these links, we may earn a small commission.
Sponsored Links