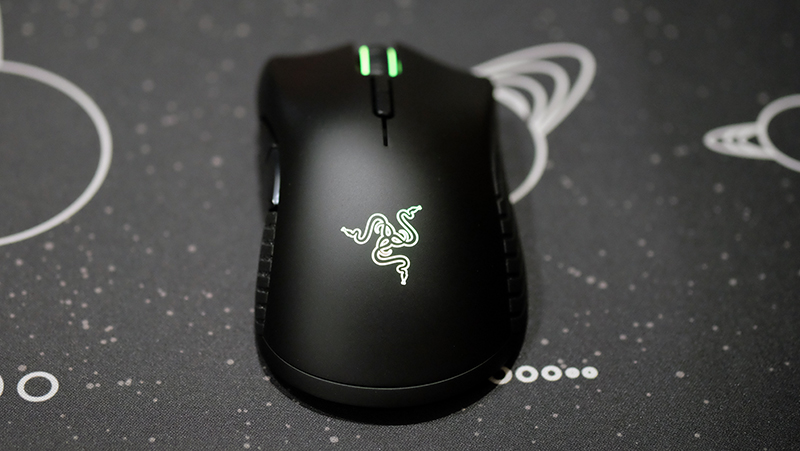 Wireless mice have truly come into their own. Razer’s new Mamba Wireless gaming mouse may be the most competent Mamba it has made yet, inching out even the Mamba Elite because of the sheer convenience that going wireless affords.

If you’re a fan of the previous Mamba, the Mamba Wireless will feel quite familiar. The shape of the mouse has changed quite a bit since it debuted way back in 2009, and the new Mamba sports somewhat gentler curves and a more ergonomic shape.

I find it more comfortable to use than the DeathAdder Elite, which has a rather severe shape, a higher arch, and somehow feels more tiring to use. The Mamba Elite is also a rather large mouse, so it’s not the best if you’ve got small mitts like me. That said, it’s best suited for the palm grip. The highest point is located more toward the middle, which leaves the back arch relatively flat.

This is an ergonomic, right-handed mouse, and the left side is curved in to allow your thumb to grip it more naturally. Conversely, the right side protrudes slightly to accommodate your ring finger and pinky. Both sides also feature rubber grips, which do help during long gaming sessions. 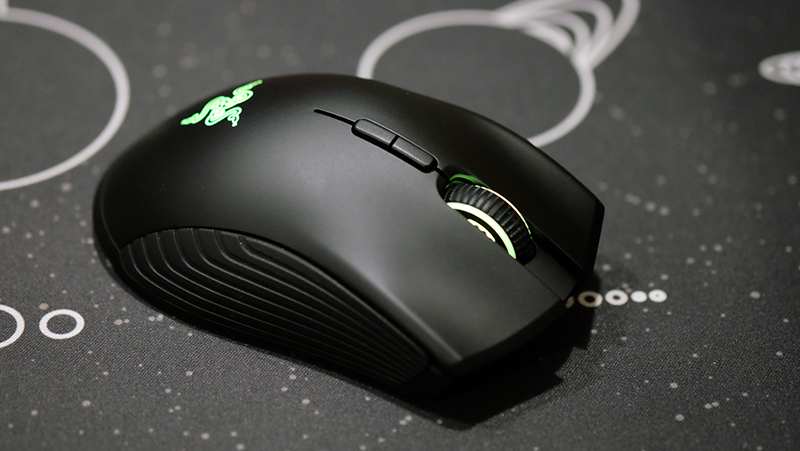 The mouse is coated in a matte black surface, which feels quite nice and resists the build up of dirt and grime quite well. Razer’s mice used to feature plenty of glossy plastic or a rubber coating that was woefully prone to peeling, so it’s great to see that those days are far behind it.

The Mamba Wireless feels like a quality product, down to the striated rubber sides and buttons that actuate with a nice click. Razer’s left- and right-click buttons are still on the lighter side, compared to a Logitech mouse for example, but they’re not light to the point that you’ll click them accidentally.

The scroll wheel has ridges for precise control, and it has just the right amount of resistance for me. 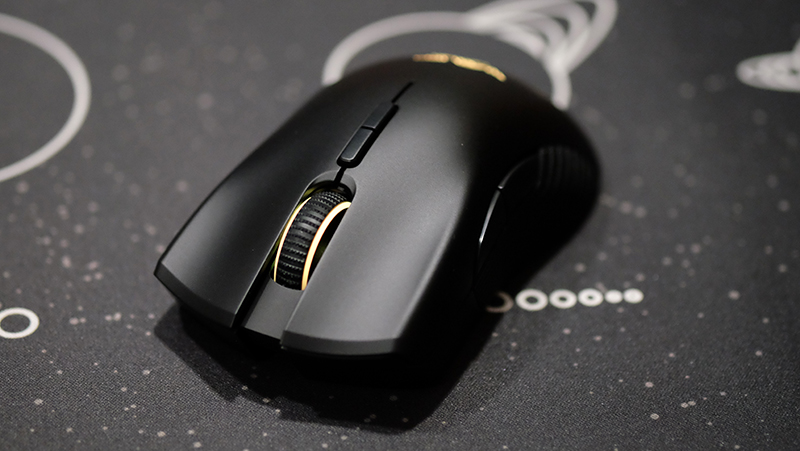 The two side buttons are large and positioned within easy reach, even though I have smaller hands. Overall, this feels like a mouse that will endear itself to those who have larger hands and favor the palm grip. 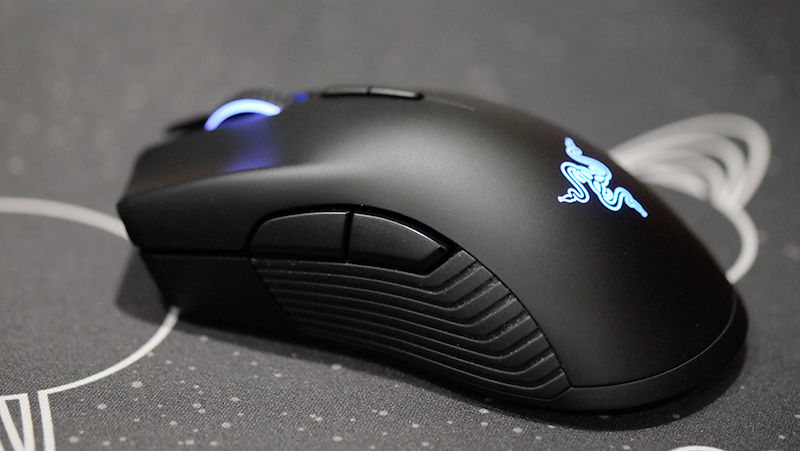 However, the biggest upgrade that the Mamba Wireless is getting over its predecessor is probably its new sensor. Like the wired Mamba Elite, the Mamba Wireless comes equipped with what Razer calls its 16,000DPI 5G Advanced Optical Sensor. All you need to know is that it’s a huge upgrade from the old laser sensor. Optical sensors are technically better suited to cloth pads as well, of which there is a far larger selection. That’s because laser sensors are way too sensitive, and pick up a lot of useless information about the structure and fibers of the cloth, whereas optical sensors just look at the surface and are capable of more consistent performance.

The difference between a laser and optical sensor is hard to describe in practice, but there’s just something about the latter that just feels more accurate, responsive, and reliable. In my time with it, I was unable to make the mouse spin out at any time, and it translated all my movements faithfully onscreen.

The Mamba Wireless uses Razer’s Adaptive Frequency Technology (AFT), which first debuted on the Razer Lancehead. This works with virtually no hiccups, and I was unable to discern any difference between the wired and wireless modes.

The mouse operates in the 2.4GHz band, but it scans the different frequencies hundreds of times a second and selects the one with the least interference. This ability to frequency hop helps ensure better transmission stability, in theory, and is what enables to Lancehead to keep transmitting reliably even in a crowded environment with multiple wireless devices. However, Razer says the frequency switching only happens when absolutely necessary, thus avoiding performance drops that can occur during this process. 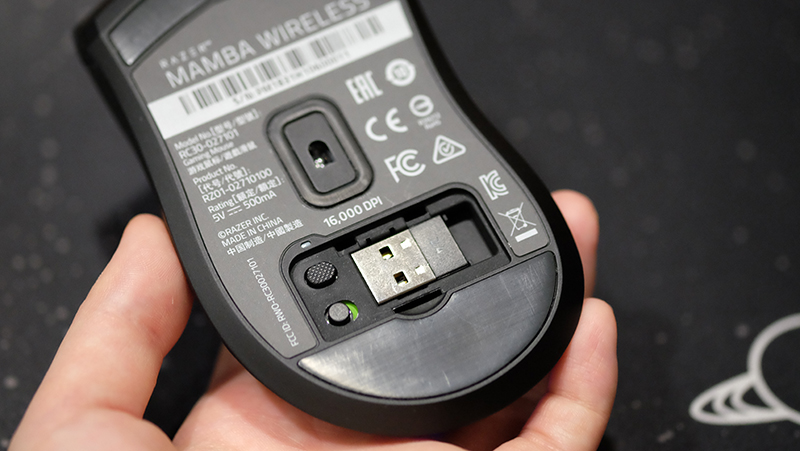 There’s also an adapter that connects with the charging cable and lets you bring the dongle closer to the mouse for the best possible performance. However, I didn’t actually need this, and the mouse felt just fine with the dongle plugged into the front USB port on my PC. 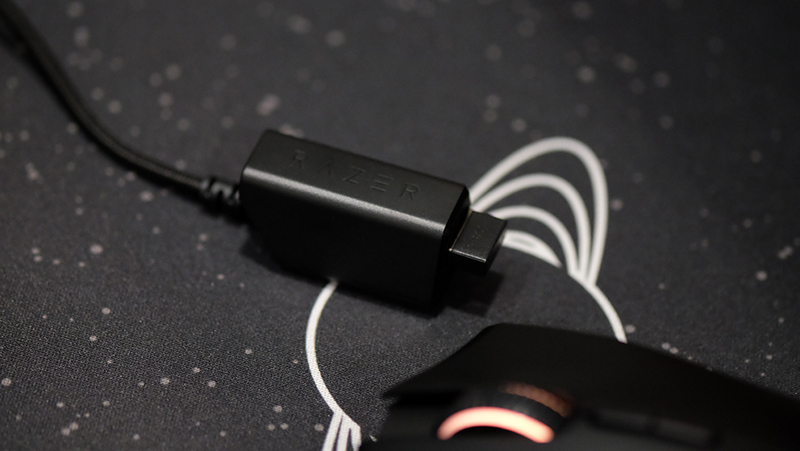 Having said that, when it comes to ease of aiming and general handling of the mouse, I’m still of the opinion that smaller mice do better, even if you have larger hands than me. Of course, this does come down to a matter of personal preference and what you’re used to, so you may very well beg to differ.

Razer also boosted the battery life on the Mamba Wireless. It’s now claiming up to 50 hours, which is pretty good on paper. However, having the RGB LEDs enabled felt like it drained the battery pretty quick, even with the brightness slider set to the middle. I found myself down nearly 40 percent after around a full day of use, so the mouse is probably good for two to three days on a single charge, depending on your usage.

However, if you’re thinking about using the Mamba Wireless to play competitively, it’s still a little heavier than most pros would probably like. It weighs 106g, which is pretty great for a wireless mouse, but it still falls behind the Logitech G Pro Wireless’ feather-light 80g. 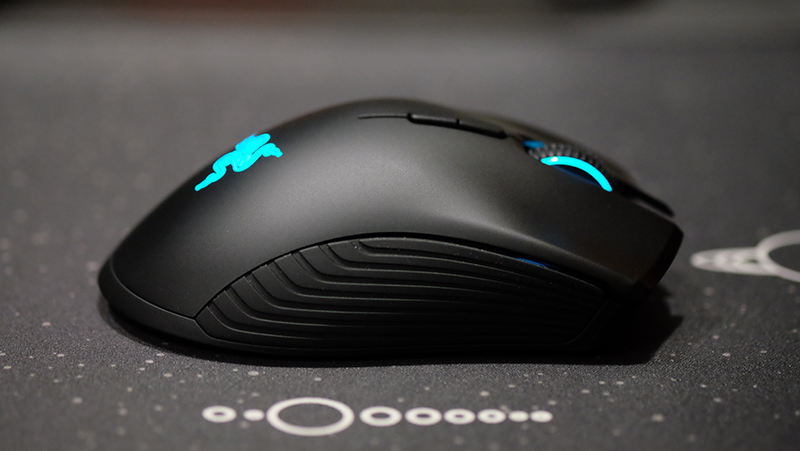 You can save up to five profiles in the mouse’s onboard memory, so you can take your settings with you wherever you go. A dedicated button at the bottom of the mouse lets you switch between profiles on-the-fly. In addition, there are two DPI adjustment buttons below the scroll wheel, so you can toggle between up to five different sensitivity stages.

The Mamba Wireless will work with Razer’s new Synapse 3 software, which is still in beta. The software is reasonably stable, but I did run into issues where it wouldn’t detect the mouse, even though I’d already installed the latest version using the built-in updater. However, a clean install seemed to fix the issue.

Razer's Chroma lighting system is solid as always, with bright, vivid, and consistent LEDs and extensive customizability. However, the Mamba Wireless is lacking the illuminated side rails found on the Mamba Elite, likely to help conserve battery.

All things considered, the Mamba Wireless is a great addition to Razer’s line-up. It’s improved on its predecessors in meaningful ways, while trimming the fat, which allowed Razer to drop the price to S$159.90. It’s not revolutionary, but it’s a thoughtful update that further proves that wireless mice are every bit as good, and possibly better, than their wired counterparts.

Write a Review
Compare This | Specifications
Excellent wireless performance
Reliable and accurate optical sensor
Comfortable shape
More affordable than its predecessor
Still heavier than competing mice from other brands
Our articles may contain affiliate links. If you buy through these links, we may earn a small commission.
Sponsored Links