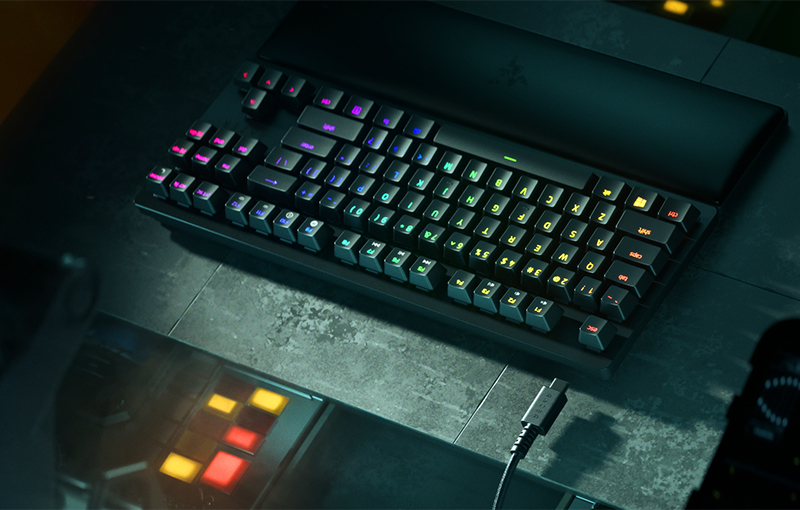 How fast is too fast?

Razer's latest addition to its Huntsman family, the Huntsman V2 Tenkeyless, builds on what made its predecessors so good and then amps it up even further. For the Huntsman V2 TKL, it's all about speed. I'm just going to get this out of the way immediately – Razer's newest keyboard comes with an incredible 8,000Hz polling rate, which means the company is claiming near-zero input latency. The keyboard checks for key presses and reports back to your computer a whopping 8,000 times a second, compared to a measly 1,000 on a regular keyboard.

Is that impressive? Yes. Can you feel the difference? Not really. That said, those of you who like to parse input lag numbers will be pleased to learn that the new second-generation optical switches have a response time of just 0.2ms, compared to 2ms for a traditional mechanical switch. I'm not sure that this will help you outmanoeuvre your opponents in game, but if you want the most technologically advanced and responsive switches you can get, this is probably it. 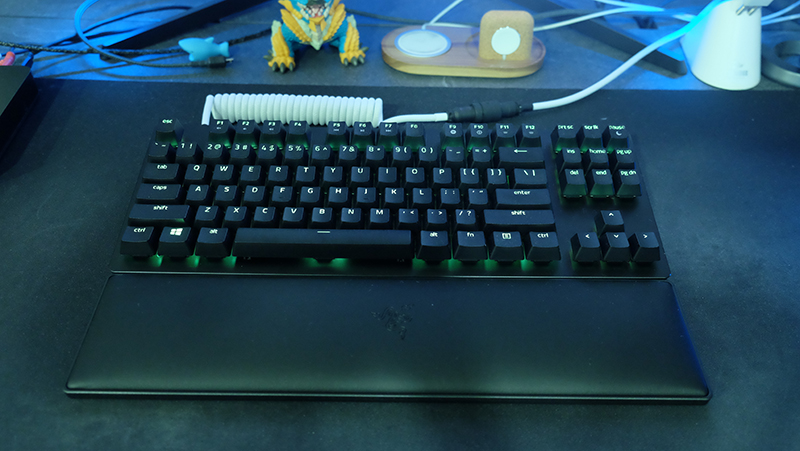 Interestingly enough, the polling rate is set to a more modest 1,000Hz by default, and you have to manually change it to 8,000Hz in Synapse. If you select any option above 1,000Hz, a caveat will pop up telling you that higher polling rates require more processing power, which may in turn decrease your frame rates in CPU-bound games. That's probably why Razer hasn't made 8,000Hz the default, instead allowing you to choose higher polling rates only if you feel your system is powerful enough.

There is also a keyswitch optimisation setting, which lets you decide whether you want to implement a debounce delay while typing. Typing mode adds a delay to prevent unwanted inputs from a single keystroke, while Gaming mode prioritises responsiveness. 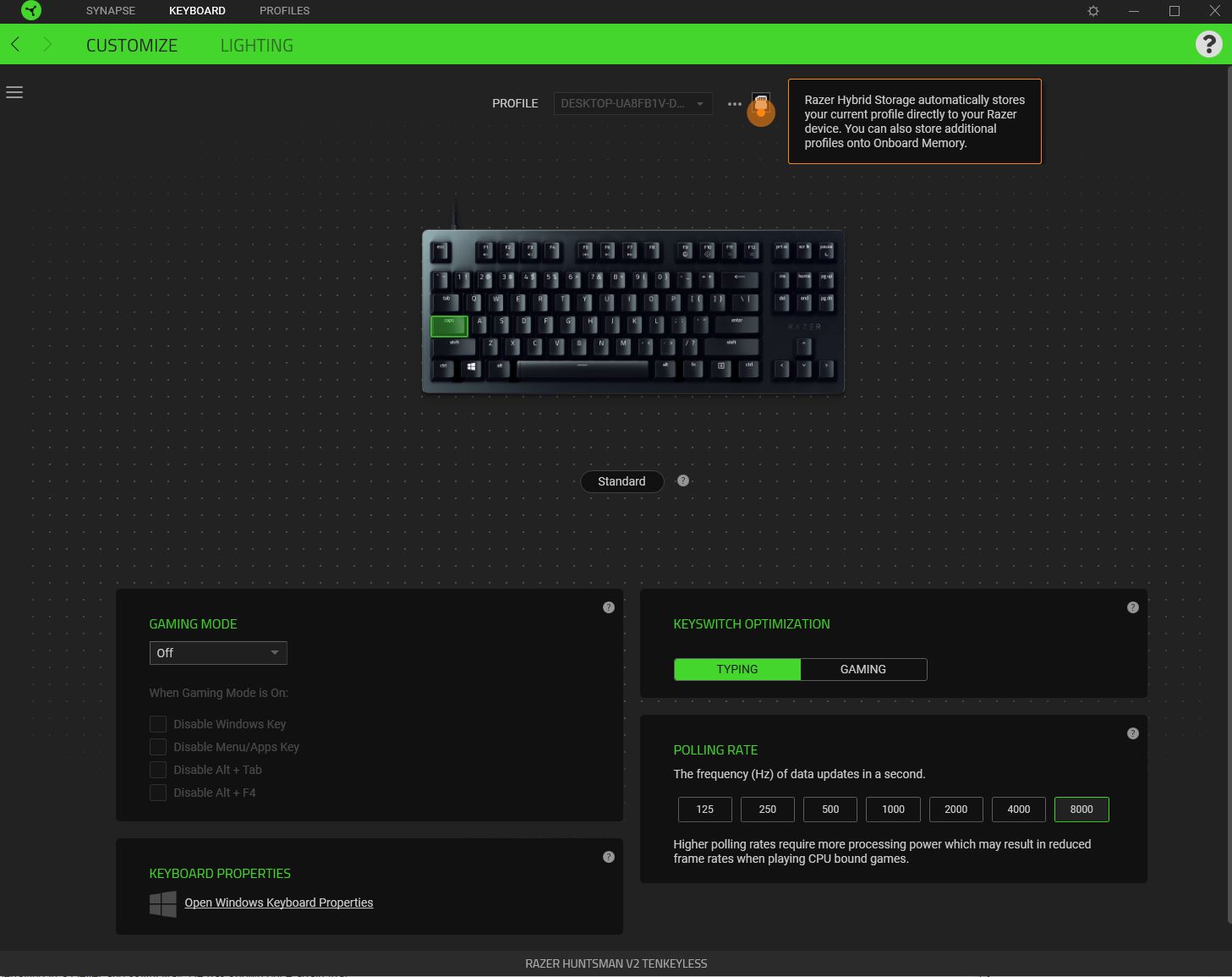 The Huntsman V2 TKL joins the Razer Viper 8KHz in offering an ultra-high polling rate, so you can get your setup fully kitted out. They're not going to suddenly improve your kill-death ratio, but they are a way to reduce the overall latency of your system if you really care about the numbers.

It's worth pointing out that the Huntsman V2 TKL is not the only keyboard to advertise an 8,000Hz polling rate. The Corsair K70 RGB TKL Champion Series mechanical gaming keyboard does the same, but the key difference is that the K70 has a 4,000Hz key-scan rate. In comparison, the Huntsman V2 TKL reports and scans at 8,000Hz, which makes it a little quicker, at least in theory. On top of that, Razer's keyboard also uses optical switches, while Corsair has stuck with Cherry MX switches. 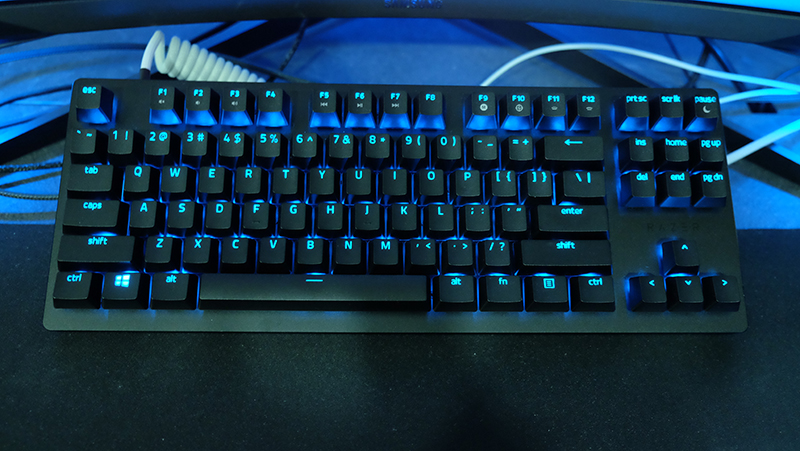 Optical switches rely on a beam of light to detect when a key has been pressed, so there are no metallic contacts to wear down. Regular mechanical switches also implement a debounce delay to prevent repeat keypresses when the metal contacts bounce off each other. Optical switches don't have this problem, so they're able to register a keypress almost instantaneously. 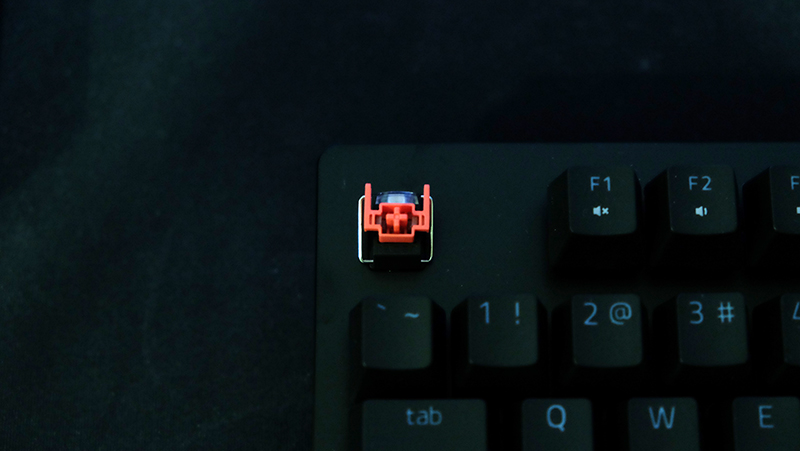 Razer has also put some work into refining the overall typing experience, although its tweaks might not be to everyone's tastes. My review unit came with Razer's red linear optical switches, which actuate at around 45g. The actuation point sits pretty high up, at just 1.2mm, while the switch resets at 1mm. The switches and stabilisers now supposedly feature more generous lubrication for smoother operation and better noise reduction. Razer also added a silicon sound dampener to reduce the "clack" sound when bottoming out, and topped that off with a layer of foam inside the case to absorb any pinging noises when typing. 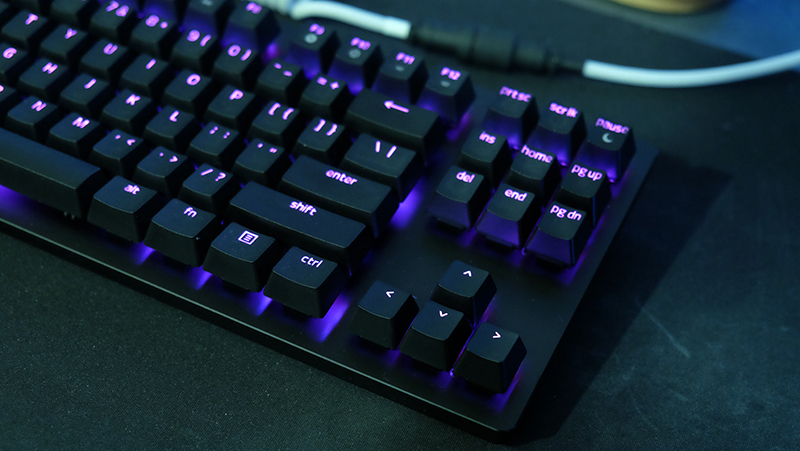 The result is a super quiet typing experience – almost too quiet in fact. So while the Huntsman V2 TKL would be a great fit for someone who wants to be as inoffensive in the office as possible, I'm not sure it'd satisfy more discerning enthusiasts who want a sound signature with more character. The silicon dampeners also create an almost mushy feel when bottoming out. Again, this is not for everyone, and it took some getting used to for me.

The plush leatherette wrist rest is a nice touch, and it's quite a delight to use and very comfortable. However, it remains to be seen how the leatherette will hold up over time.

The doubleshot PBT keycaps feel great under the hand though, with a nice, matte texture that should resist shine. The legends will also not fade, thanks to the doubleshot molding process that creates them from a separate piece of plastic.

Build quality is excellent, and the aluminium top plate delivers a very rigid construction with no creaking or flexing. Overall, the keyboard adheres to an elegant, minimalist aesthetic that makes it suitable for both work and play. Turn the RGB lights off, and it's fully equipped to go incognito. 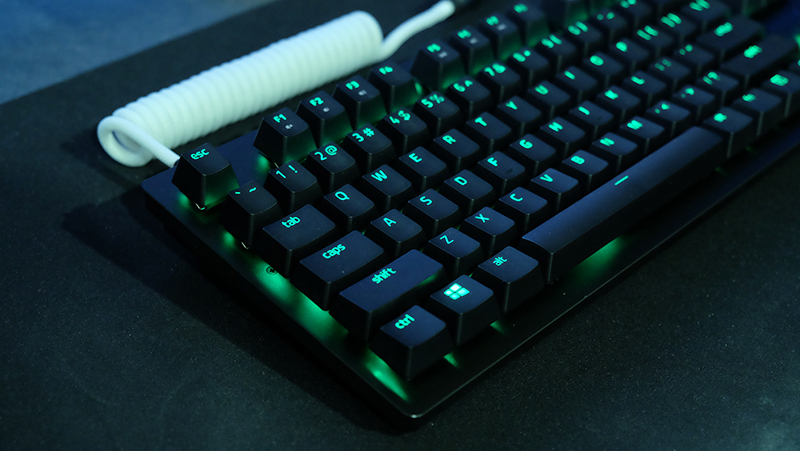 But if you're all about that RGB lighting, you'll have nearly limitless options available to you, with support for per-key customisations and bespoke lighting effects. The doubleshot legends still create some slight brightness inconsistencies, but I'm really just nitpicking here.

The Huntsman V2 is available in both tenkeyless and full-sized form factors, but I'm partial toward the former as it is easier to centre for a more ergonomic typing experience, while also leaving more room for your mouse.

The keyboard ships with a detachable, braided USB-C cable, so you'll have the option to use one of Razer's coiled cables, or your own. 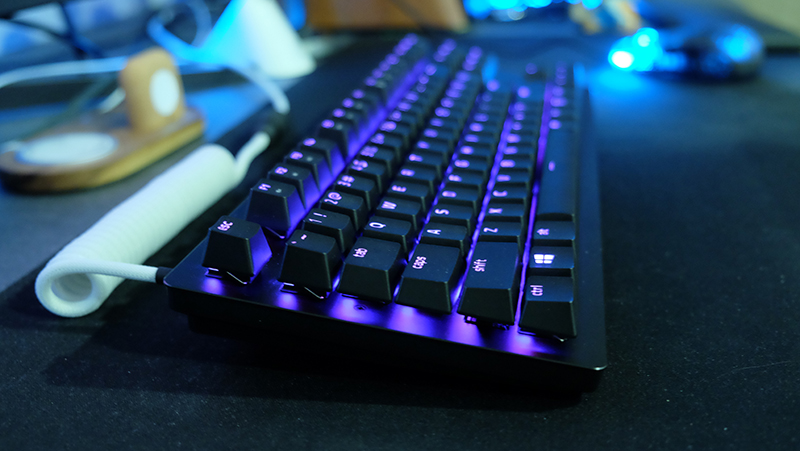 At S$254.90, the Huntsman V2 TKL is rather pricey. You're paying for a lot of tech, such as the 8,000Hz polling rate and lubed optical switches. However, the typing refinements are not for everyone, and unless you're expressly after a really quiet keyboard, you might not like the slightly mushy feel when bottoming out. And while it did grow on me after a time, going back to any of my usual keyboards immediately reminded me of what I'd missed.

This is overall an excellent product and one of the best-looking gaming keyboards out there, but it's difficult to justify the price increase given the questionable utility of the higher polling rate. It's really cutting-edge and advanced, but it simply doesn't translate tangibly into real-world benefits. I want to applaud Razer for really pushing the envelope in terms of keyboard tech and design, but the Huntsman V2 TKL doesn't significantly improve the user experience over the Huntsman Tournament Edition.

If you want the most responsive keyboard you can get, this is probably it. If not, few of you will miss the 8,000Hz polling rate.