Razer Huntsman V2 Analog review: Kind of like having joysticks on your keyboard

Razer Huntsman V2 Analog review: Kind of like having joysticks on your keyboard

Note: This article was first published on 2nd April 2021. 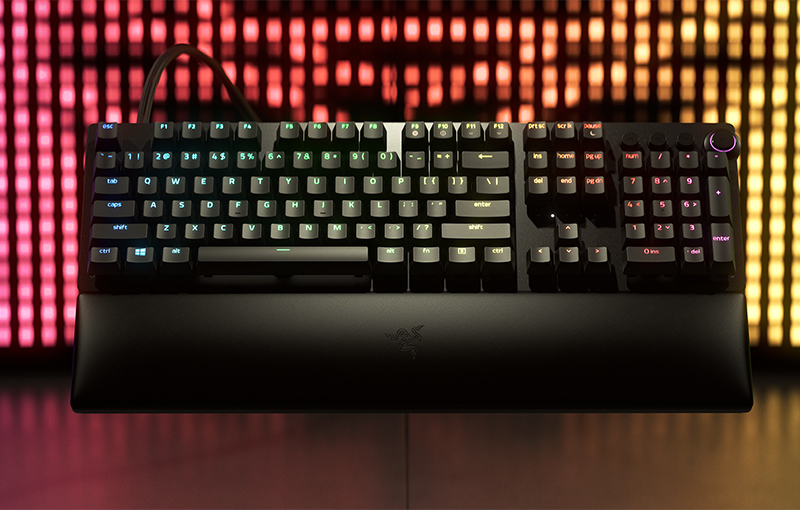 Razer's Huntsman family of keyboards just keeps growing. The newest member is the Huntsman V2 Analog, which as its name suggests, features unique pressure-sensitive analog optical switches. This is still a rarity today – one other brand that also makes analog keyboards is Wooting, but it has yet to really gain traction in the mainstream market. (On an unrelated note, while we primarily use British English, since the product name is "Analog", we'll stick to that throughout the article.)

The Huntsman V2 Analog is probably one of the most easily available analog keyboards today, but it also comes with a stiff price tag. At an eye-watering S$399, it will only really appeal to gamers who, depending on the games they play, want controller-like functionality on their keyboard. The Huntsman V2 Analog lives and dies on its analog switches. If you've been wanting this feature for a while, the price will seem justified. If not, it's simply out-of-this-world expensive.

Design-wise, the Huntsman V2 Analog looks remarkably similar to the BlackWidow V3 Pro, so Razer has decided not to change up anything too drastically outside of its new switches.

How do analog switches work?

But its familiar appearance belies the cool tech underlying its switches. Derived from Razer's optical switches, which rely on light to actuate a key instead of mechanical contacts, the analog switches can now track how much light goes through the switch and allow the keyboard to measure how far down each key is pressed. These have all the benefits of regular optical switches as well. With fewer moving parts and no physical contacts to degrade, these switches are theoretically more reliable and are rated for up to 100 million keystrokes.

What this means is that you now get additional adjustability in each keystroke. The analog input emulates an analog joystick input for smoother, finer-grained control, but you can also customise each key's actuation point. You can set the actuation anywhere from 1.5mm to 3.6mm, depending on your preferences. 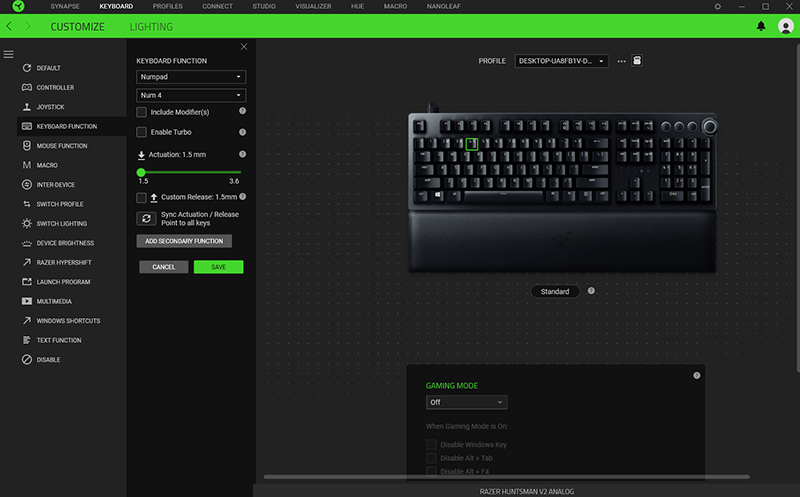 Finally, each key also supports deeper functionality with what Razer calls dual-step actuation. This enables each keystroke to activate two different programmed functions set at two different actuation points, kind of like having two keys in one. At first glance, this appears to lend itself well to performing complex combos in game, or even by combining simple actions. For instance, instead of switching to your grenade and throwing it with your left mouse button, you could simply throw it in the same keystroke.

In practice, the analog switches are pretty neat. The level of customisation in Synapse makes for some seriously fun tinkering, especially if your game supports it. The keys are set to actuate at 1.5mm by default, and it's really nice having the option to change the actuation point in increments of 0.1mm to fit your typing style. What's more, you can also customise the analog sensitivity to suit your needs. 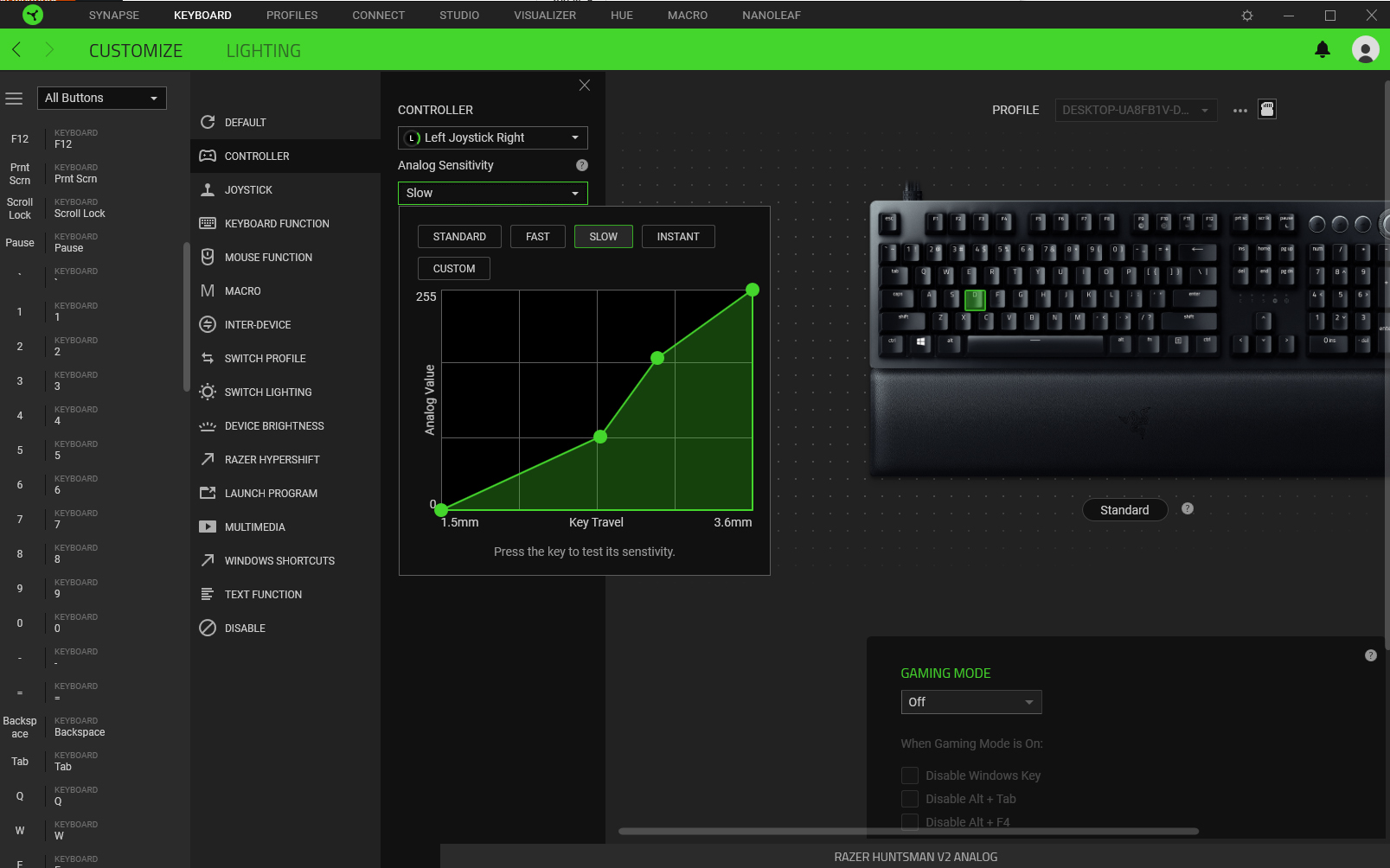 Razer says the keyboard will work with any game that supports both mouse and controller input, but oddly enough, there isn't yet an official list of supported games. Having said that, I'm not sure I'm entirely sold on the merits of nuanced, analog control on a keyboard.

Don't get me wrong – Razer's analog switches work brilliantly, and I'm able to go from a slow walk to a fast sprint in Call of Duty: Modern Warfare without having to hit the Shift key at all. But the Huntsman V2 Analog isn't really ideal for first-person shooters. That's because people tend to bottom out when playing shooters, and most of your focus is generally on your mouse. If you have to focus on actuating a key halfway because you want to Shift walk, and be careful not to press down too far to go into a full-on sprint, your aim will suffer.

And in games that it is actually theoretically more suited for, such as racing games and third-person adventuring in the Assassin's Creed franchise or Monster Hunter World: Iceborne, the support for analog movements doesn't change the fact that the button layout of a controller still feels more intuitive for these games. 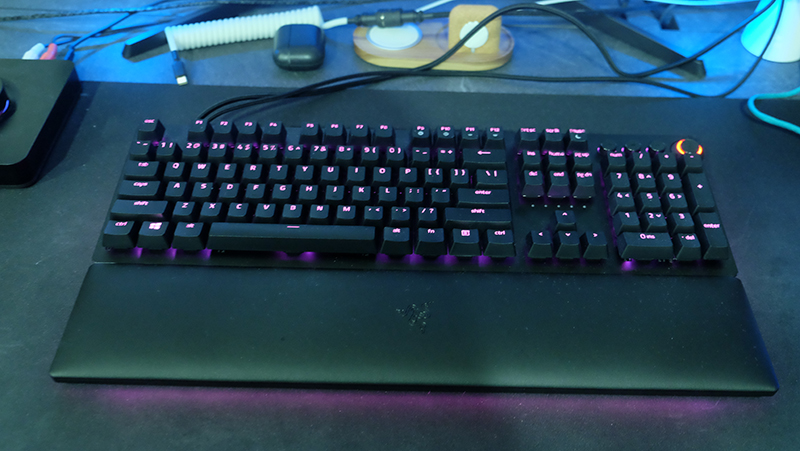 It goes without saying that most of the analog capabilities are tied to Synapse, and you'll definitely need to have it running to get the most out of the Huntsman V2 Analog. However, activating the analog functionality is also a whole different ball game. There is a useful Quick Remapping feature in Synapse that lets you instantly bind WASD to controller joystick, so you don't have to manually assign that function to each key. However, this means that you can no longer type with WASD, so this is something that you'll have to toggle on and off when entering and exiting your game.

Beyond that, it's not immediately intuitive how to make use of the dual-step actuation. You have to first click the key you want to assign this function to, select keyboard function from the left menu, and then click Add Secondary Function.

My biggest gripe is how every key has to be manually reassigned if you want to take advantage of the controller-like functionality in game. This is just one of the limitations of having a keyboard that sort of also doubles as a controller, which is one of the reasons why I think you might be better off just using a dedicated controller for certain games. That said, it'd be nice if the controller functionality would only activate when you're in game, or if there was some way to create a separate controller mode and toggle to it with a quick key press. 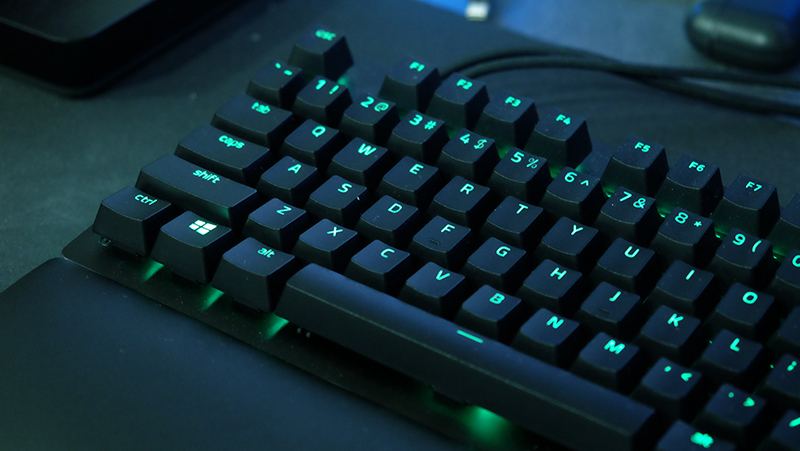 Nevertheless, the Huntsman V2 Analog remains at the forefront of gaming keyboard tech. I don't find it super practical at the moment, but it is very possible that analog switches could truly come into their own if games start to properly support them. Most games today fall pretty clearly on either side of the keyboard and controller divide, so we'll need to see a pretty drastic shift to account for this new type of switch.

As a regular keyboard, the Huntsman V2 Analog is a pretty solid board. Like most of the Huntsman line, Razer has stuck to durable, doubleshot PBT keycaps and a standard bottom row. This means no pesky keycap shine, and also good support for third-party keycaps if you want a different look. You also get a great volume wheel – press to mute – and convenient dedicated media controls. 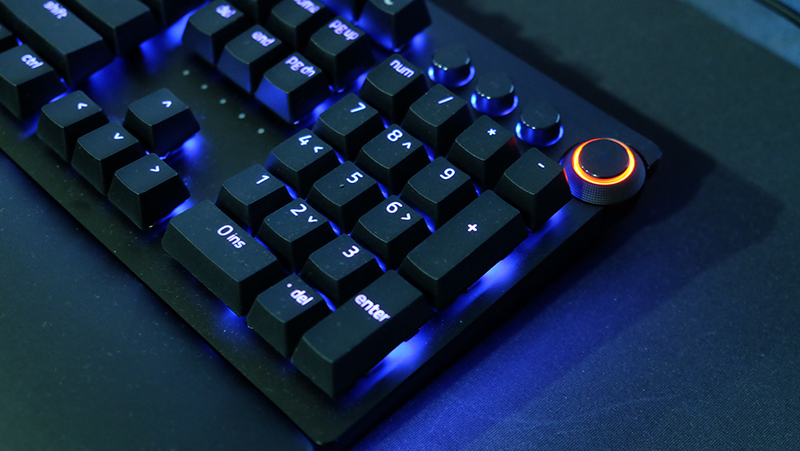 The stock PBT keycaps produce a deep, satisfying typing experience, but they are on the loud side. The analog switches themselves feel smooth and pleasant to type on. They require a decent amount of force to actuate, feeling more akin to Cherry MX Blacks instead of the lighter Red switches. Switch wobble is minimal, so the typing experience overall is pretty solid.

The backlighting is bright, with smooth and fluid lighting effects. However, it seems like certain inconsistencies in the level of transparency of the legends can create a slightly uneven effect on certain keys, like the "%" and "$" signs.

Build quality is very robust, with almost no discernible flex to the body of the keyboard at all – an impressive feat for a full-sized keyboard. The magnetic wrist rest that comes with the keyboard is topped with a plush leatherette that feels great, and it is super comfortable to rest your wrists on. The wrist rest comes with its own underglow lighting, similar to what you get on the keyboard itself.

Unfortunately, the Huntsman V2 Analog is also a super large and unwieldy keyboard. The full-sized layout makes it difficult to centre, and I find my left and right hands awkwardly spaced and too far apart when using the mouse. But if you're already used to a full-sized board like this one, you probably won't face any issues. On top of that, it features two fat, non-detachable braided cables that extend from the top left. These are stiff and not pliable at all, making them hard to manage and route neatly. 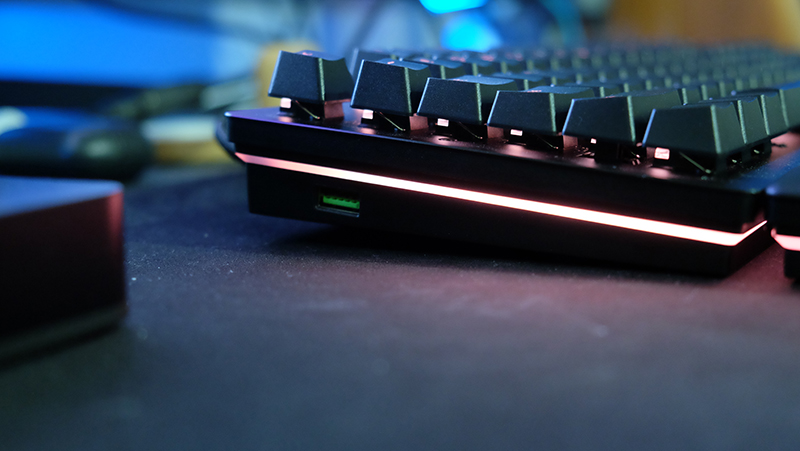 One of these is a USB Type-C cable, while the other is a Type-A. You can actually power the keyboard with just the USB-C connection alone, but then you'd be left with the stray Type-A cable because you can't detach it. Suffice to say, you don't want to be taking this keyboard anywhere other than your desk. A USB 3.0 Type-A passthrough sits on the left of the keyboard, which is useful for plugging in a thumb drive or external hard disk. 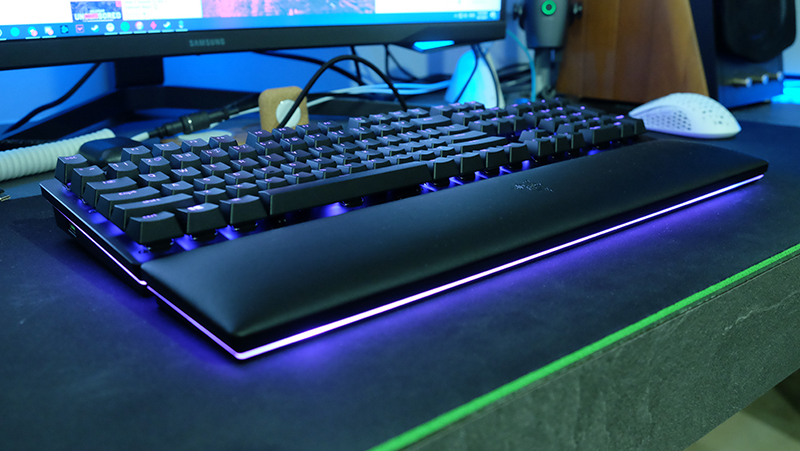 The Razer Huntsman V2 Analog is a great keyboard that sits on the cutting-edge of switch tech. But it is also impractical in more ways than one. The analog tech is cool and supports a ton of customisability and powerful features. If you enjoy tinkering and like the idea of optimising all your keystrokes, it could appeal to you. But it doesn't work with every single game and is a bit of a hassle to set up.

As a traditional keyboard, it is excellent, boasting solid build quality, PBT keycaps and a standard bottom row. On top of that, it serves up a stellar typing experience. However, you can get most of the same experience on the BlackWidow V3 Pro, which is a bit cheaper and is wireless, so you don't have to deal with the fat, pesky cables.

To help make the purchase decision easier, Razer should release a list of games that the Huntsman V2 Analog has been tested to work with. At the moment, the S$399 price tag is a steep price to pay when you can't be sure that your game will work properly with it. But if you do decide to shell out anyway, what you get is a keyboard that is ahead of its time and will provide endless customisations and delightful new use cases waiting to be discovered.

Have we piqued your interest? You can get the Huntsman V2 Analog from Razer's own e-store now. Alternatively, Razer has an official store on Shopee and Lazada too.

Write a Review
Compare This | Specifications
Analog switch tech is at the cutting-edge of keyboard design
Plush and comfortable wrist rest
Durable PBT keycaps
Standard bottom row for third-party keycap compatibility
Analog input will not work for all games
Need to manually reassign each key to use controller functionality in-game
Twin braided cables are stiff and unwieldy
Very pricey
Our articles may contain affiliate links. If you buy through these links, we may earn a small commission.
Sponsored Links