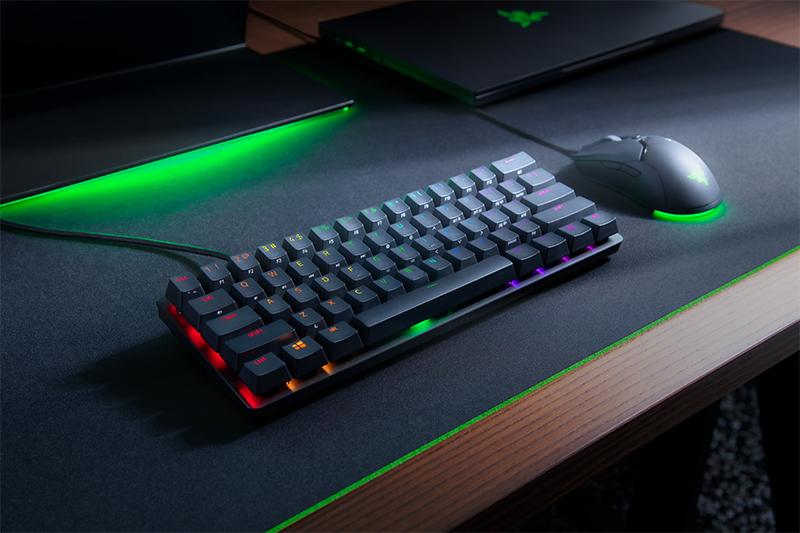 A light and travel-friendly keyboard

Razer has released the most compact keyboard in its Huntsman family yet. The Huntsman Mini is the company's first-ever 60% keyboard, and I can't believe how long it took Razer to come up with a challenger to something like the Pok3r or Ducky One 2 Mini.

While some people can't see themselves giving up even the number pad, there are others who prefer a smaller keyboard that will give them more room for their mouse. I fall firmly in the latter camp, and I also like 60% keyboards because their smaller footprint makes them easier to centre and more ergonomic to use. It feels far more natural to have your mouse hand closer to the WASD key cluster, or QWER if you're a MOBA player, and your back and shoulders will thank you in the long run. If you're not working with spreadsheets regularly and are looking for a daily driver for gaming, the Huntsman Mini is shaping up to be a top contender. 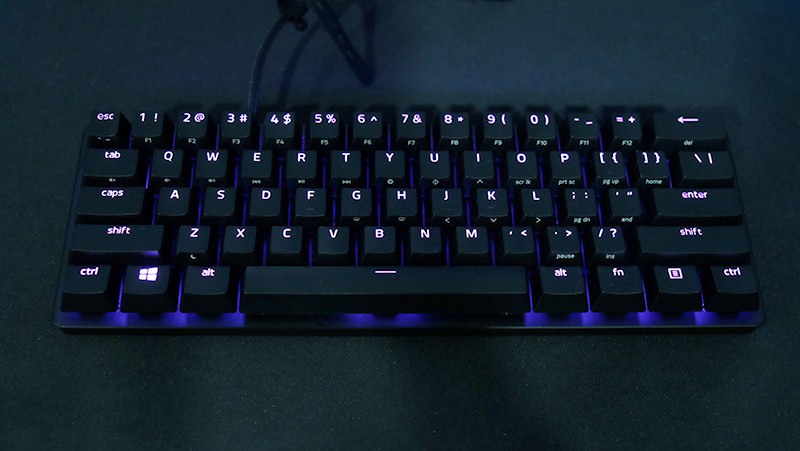 Complete with a lightweight aluminium construction and detachable braided USB-C cable, the Huntsman Mini could be a good travel companion. The 60% form factor sheds the function row and arrow keys, but it still retains all the essential keys and the Fn key lets you access the aforementioned function row, arrow keys, home cluster, and more through a secondary layer.

The diminutive Huntsman Mini follows in the footsteps of its larger siblings, featuring Razer's own optical switches that supposedly provide faster actuation compared to traditional mechanical switches. To recap, Razer uses light to actuate a switch, whereas traditional mechanical switches register a key press via metallic contacts.  A light beam passes through the switch stem when a key is pressed, which then actuates via a receiver that sends the corresponding signal to the computer. No debounce delay is required because metal contacts are not involved, so the signal is sent right at the instant you actuate the key.

The keyboard is available in two variants – the clicky purple switches (45g) and linear red switches (40g). Razer sent me both, and I can safely say that the linear variant is by far the superior one. Compared to the linear switches on the Huntsman Tournament Edition, the linear switches that ship with the Huntsman Mini are second-generation offerings that feature improved acoustics, in that they are now silenced and a lot quieter than before. They still retain their relatively short actuation distance of 1.0mm however, so these are among the most responsive switches around, in theory. 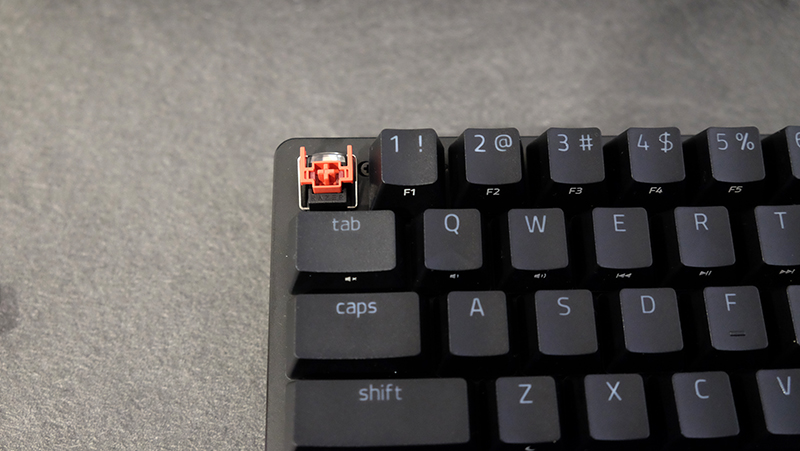 The new linear switches now come with silicon sound dampeners and more generous switch lubing, which create a smoother and quieter experience. The Huntsman Mini with linear switches is markedly quieter than its Tournament Edition counterpart, but one downside of the silicon dampeners is that they do exactly what their name says and end up dampening the keystroke. While that helps cut down on noise and also makes the Huntsman Mini uniquely suited for office use, each key press can feel slightly mushy and shallow, especially if you're looking for a deep and satisfying "thock" sound. That said, I can't really fault Razer on the smoothness of the switch, and the new linear switches more than deliver in this area. 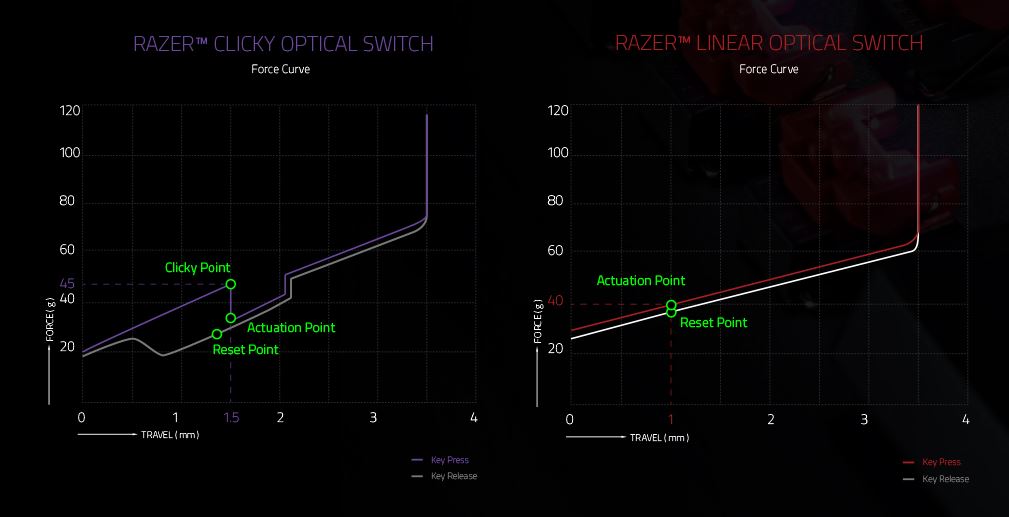 In comparison, the clicky switches feel crunchy, and I don't mean that in a good way. The tactile bump feels unsatisfying, and you're left with a noisy keyboard that will earn you the ire of your co-workers. What's more, the reset point sits above the actuation point, instead of being at the same point like the linear switches, so they're less suitable for rapid key presses and gaming. That said, with most of us working from home now, this probably isn't such a big deal.

Having said that, both switch types are plagued by considerable switch wobble, despite the tiny stabiliser bar that Razer has incorporated into the switch design. Razer says it allows for fewer moving parts within the switch though, which combined with the optical switch technology, may help improve long-term reliability. According to Razer, you're looking at a lifespan of up to 100 million keystrokes, double the industry standard. 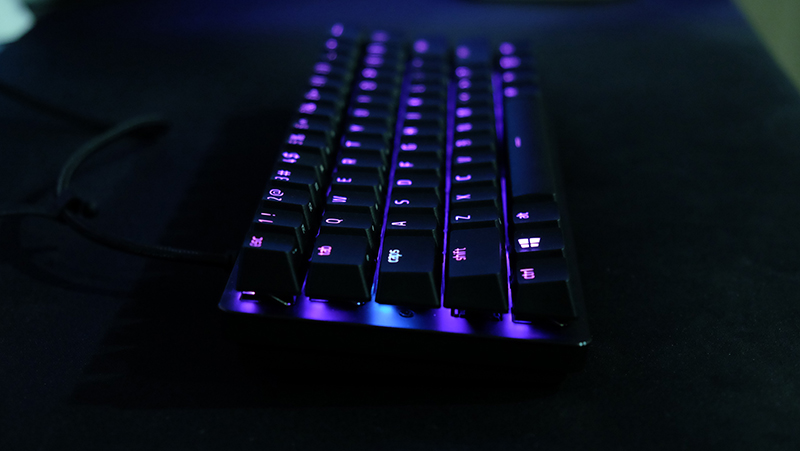 The board uses a plastic bottom chassis and an aluminum top plate, the latter of which adds some welcome stiffness and rigidity to the overall build. There is no flexing anywhere and the keyboard in no way feels flimsy. The floating key design makes cleaning the keyboard super easy as you can just blow dust and detritus out quickly without necessarily having to remove the keycaps.

The doubleshot PBT keycaps are far superior to the standard ABS you still get on many keyboards today. PBT is a denser plastic than ABS and is more resistant to key shine, so it'll stay in like-new condition for longer. In addition, they are more textured, which I prefer to the smoother surface of ABS keycaps. On top of that, the use of doubleshot injection moulding – where the legends are formed from two layers of plastic moulded into each other – allows for keycaps that are effectively resistant to fading legends. Razer says that it used bespoke manufacturing methods to create the thinnest font possible on a doubleshot PBT keycap as well, and the legends look crisp and easily readable. Secondary legends are printed on the sides of each keycap, so you shouldn't ever be at a loss as to where the arrow keys are. 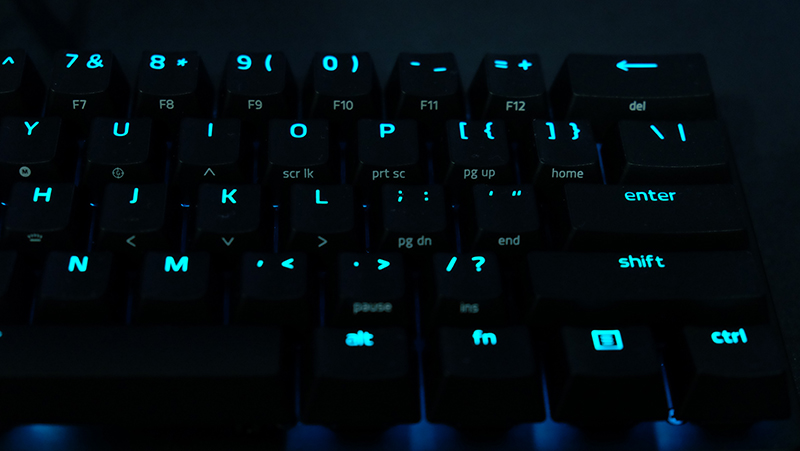 And as on the Huntsman Tournament Edition, Razer included a standard bottom row on the Huntsman Mini, which means it should be compatible with most custom keycap sets available today.

Backlighting is bright and even, helped along by the fact that the main legends are arranged in a tight horizontal fashion and directly above the switch LED. It also looks to have been improved over the Huntsman Tournament Edition, where the lighting appeared uneven on symbols like the '@' sign.

Unfortunately, the keyboard won't store your lighting profiles in its onboard memory. Nevertheless, the Huntsman Mini supports seven different lighting presets even without Synapse 3 installed. To switch between the preset lighting effects, you simply hit Fn + Ctrl + 1-7. Tap on the same number multiple times to toggle between preset colors, including white, red, green, blue and cyan, in the same effect style. 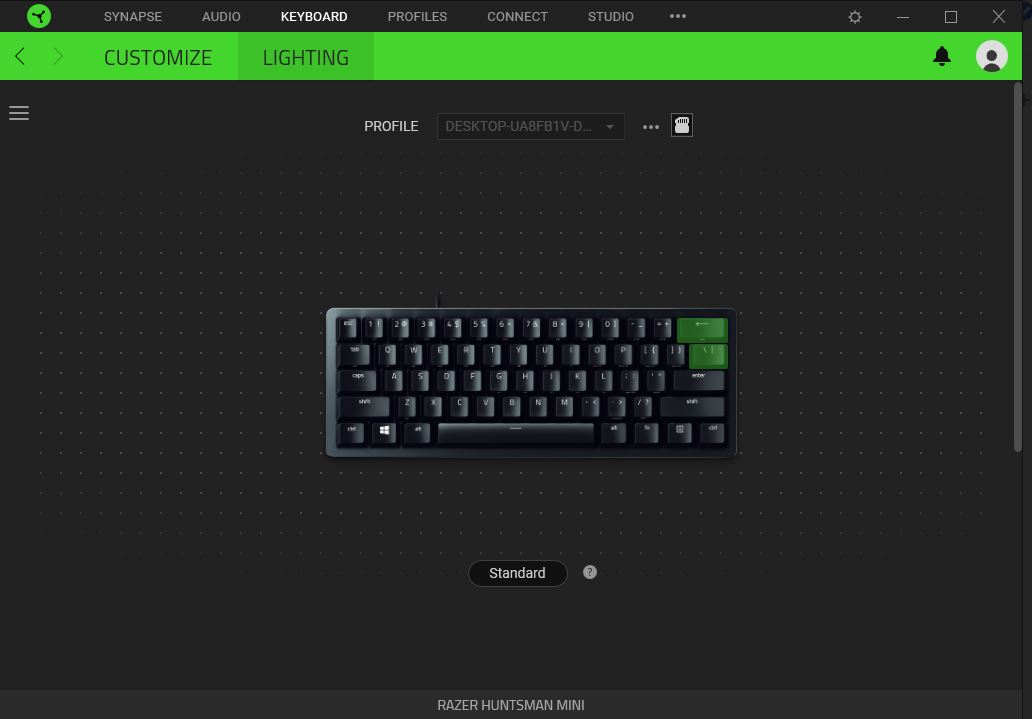 The onboard memory will remember your key binds however, and you can store up to five custom profiles on the keyboard itself.

The base of the keyboard reminds me a lot of the Huntsman Tournament Edition. Razer's "For Gamers. By Gamers." slogan is etched on the back of the keyboard, and it's a look that befits the keyboard. There are two pairs of feet, which offer typing angles of 6° and 9°, so you can pick whichever suits you better. Personally, I found the 9° angle too steep, so I opted for the other set of feet. 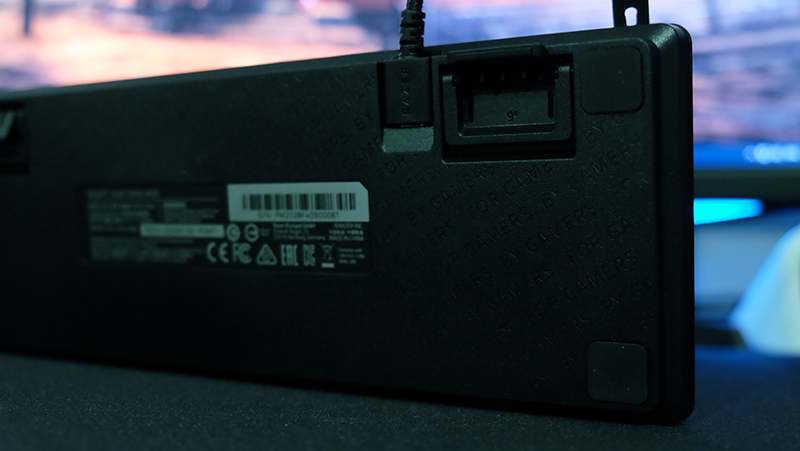 The USB-C cable slots securely into a niche at the bottom of the keyboard. Two protrusions along the channel interface with niches along the USB-C header, and it helps make the cable more secure. That said, the slot is designed to fit any regular-sized USB-C cable, so you can feel free to use your favorite custom cable here. 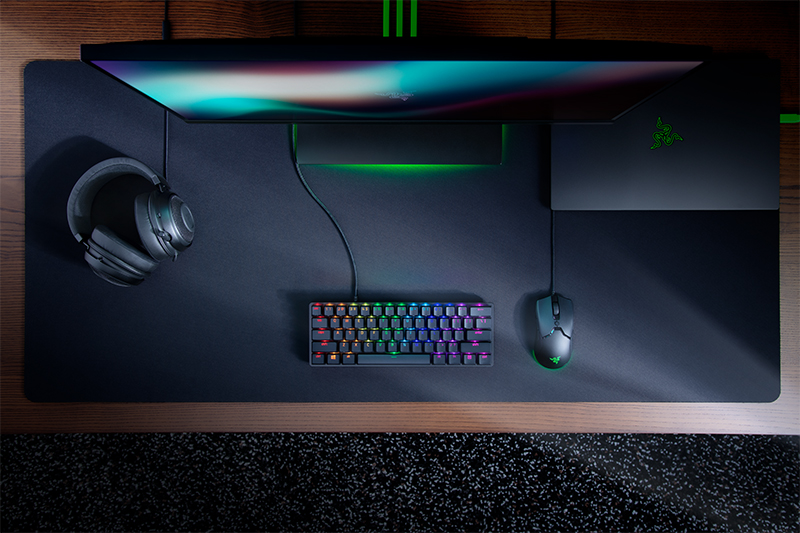 At S$189.90 for the clicky, purple switches and S$209.99 for the linear reds, the Huntsman Mini is a considerable investment. It is a study in sleek minimalism, and some may question why they have to pay so much for a keyboard that is lacking things like dedicated media controls or even the function row. That said, there remains a sizeable segment of gamers and enthusiasts who prefer a more compact keyboard, and I'm happy to see that Razer has something for them at last.

That said, I should point out that while Razer's optical switches are more responsive in theory, they don't confer any practical benefit in-game. Their main advantage is probably greater reliability, and it's nice to see Razer offering pre-lubed and silenced switches to those who want smoother and quieter switch operation. I personally still prefer the first generation of linear reds because of their more satisfying feedback, but I get that some people could really benefit from a quieter mechanical keyboard.

If you're used to larger keyboards but have your eye on something smaller, the Huntsman Mini is a good entry point to the 60% form factor. With features like doubleshot PBT keycaps, a detachable USB-C cable, and a standard bottom row, it is one of the best mechanical gaming keyboards you can get today. Just do yourself a favour and get the linear, red switches instead of the clicky ones.

Have we piqued your interest? Get the Huntsman Mini from Razer's own e-store now. Alternatively, Razer has an official store on Shopee and Lazada too.

Write a Review
Compare This | Specifications
Detachable USB-C cable
Doubleshot PBT keycaps
Smooth, optical switches
Standard bottom row allows for more custom keycap options
Still requires Synapse 3 to be installed on PC to access onboard profiles
Compact 60% layout may not be for everyone
Pricey
Our articles may contain affiliate links. If you buy through these links, we may earn a small commission.
Sponsored Links