Note: This review was first published on 14 December 2021. 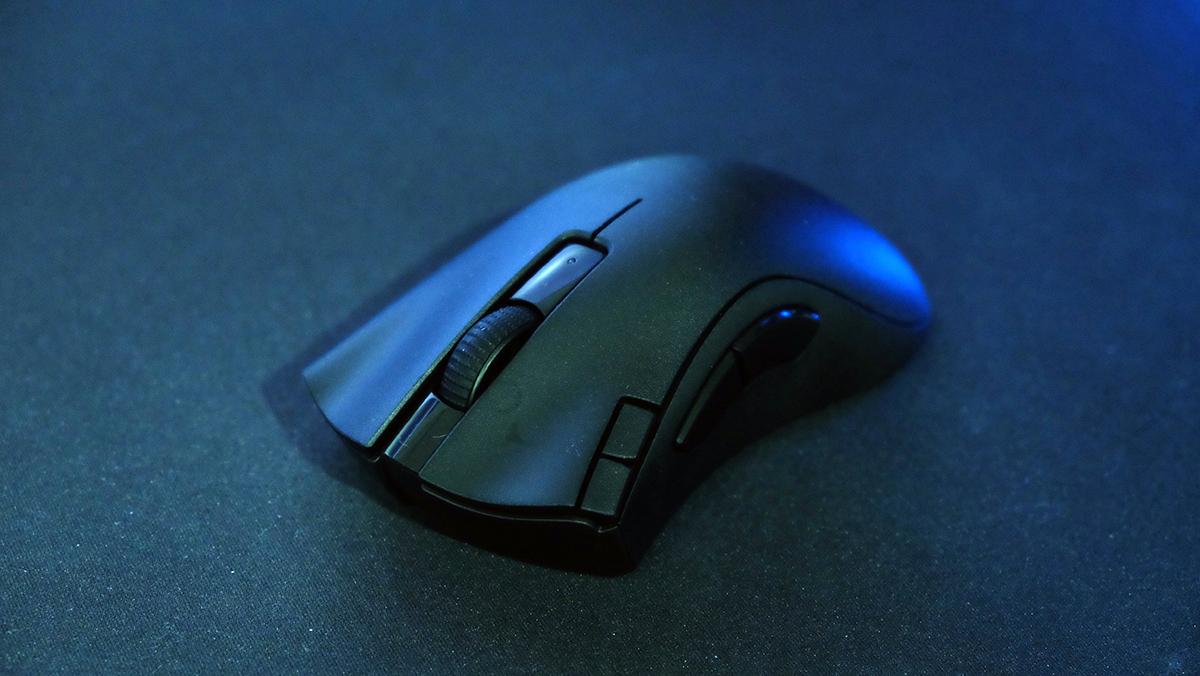 Razer's most iconic mouse has a new look yet again. The Razer DeathAdder V2 X HyperSpeed is the latest addition to this sprawling extended family, offering dual HyperSpeed wireless and Bluetooth functionality in an affordable package. With over 13 million DeathAdders sold, people have been lapping up every iteration of this classic.

The new DeathAdder V2 X HyperSpeed isn't intended to replace the DeathAdder V2 Pro though. The Pro is Razer's flagship DeathAdder, while the V2 X sits lower down the rungs. Certain tweaks and compromises have been made to achieve the more palatable price point, but that doesn't mean the V2 X feels cheaply made in any way. 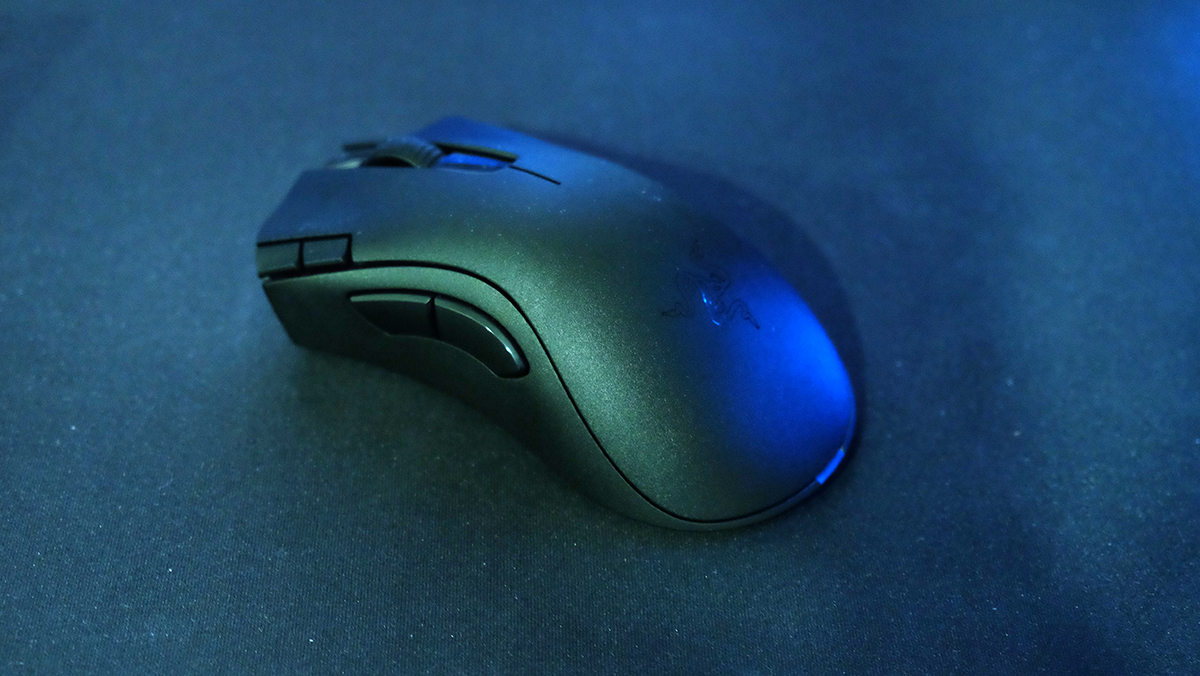 What's interesting about the design is the inspiration it takes from the Razer Orochi V2. There's the same removable top and support for a single AA or AAA battery, so you can pick between longer battery life or lighter weight. Razer says it has taken care to optimise the position of the battery slot too for more balanced weight distribution. The mouse ships with a single AA battery, but for some reason it isn't a lighter lithium one like on the Orochi V2.

The DeathAdder V2 X weighs in at between 86g and 103g, depending on the type of battery you've installed. With the AA battery, the mouse feels relatively hefty in hand, especially when compared to the wide selection of ultralight options available today. The rubber side grips on the Pro model are missing too, replaced instead by the matte plastic that covers the rest of the mouse. This makes it a little harder to find purchase on the mouse if you've got dry hands, but the textured plastic does a good job of staving off the build-up of oil and grime. The ergonomic DeathAdder shape is as great for the palm grip as always, with deep comfort grooves along each mouse button and a tall hump. The side buttons are large and easily accessible side, responding crisply to each button press with no mushiness or excessive post travel. The same goes for the primary mouse buttons, which use Razer's Gen2 mechanical switches and not the optical ones found on its higher-end mice. However, I do wish that the clicks could be more tactile, and they are a little too light for my liking.

The rubberised scroll wheel has ridges for better grip, and it is quiet with well-defined notches. On the bottom, the mouse feet are pure PTFE and are incredibly smooth right out of the box. 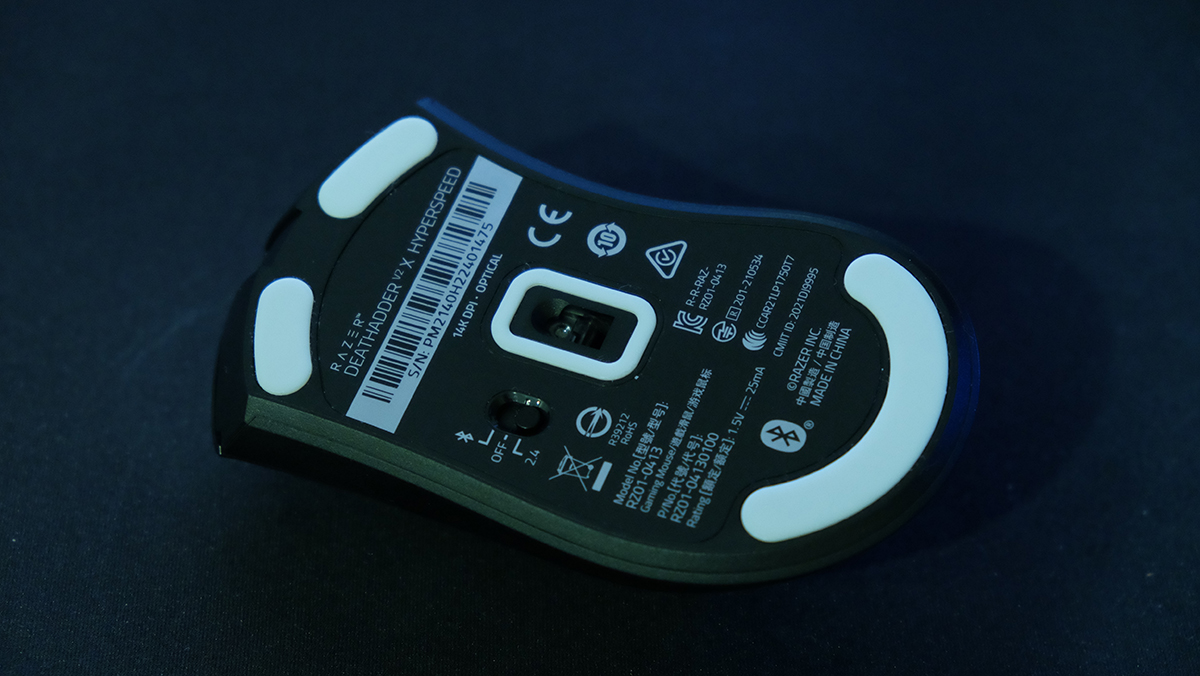 Another change from the DeathAdders that have come before it is also the button layout. The two DPI adjustment buttons have moved from below the scroll wheel to the top left corner of the left mouse button. They're a little out of the way and difficult to press, but it also means you're less likely to trigger an accidental DPI change.

The sensor is a 14,000DPI optical sensor, and tracking is unsurprisingly flawless. Razer's HyperSpeed wireless tech works perfectly, and there is no lag or skipping whatsoever. But since the mouse doesn't use rechargeable batteries, there is no wireless extender cable included in the box should you want to place the dongle closer to the mouse. If you need to travel with the mouse, there's a dedicated niche to hold the dongle so you don't lose it. Battery life is simply outstanding, much like on the Orochi V2, and Razer is claiming up to 235 hours of use on the included AA battery (much longer, if you opt for Bluetooth). Another year, another spin on the DeathAdder. The DeathAdder V2 X HyperSpeed takes aim at more budget-conscious gamers this time, those who want the beloved shape in a travel-friendly wireless package. At S$95, it's a lot more affordable than the DeathAdder V2 Pro too, while still offering the same HyperSpeed wireless functionality. The mouse makes some compromises compared to Razer's flagship models, such as a different sensor, no RGB lighting, mechanical instead of optical switches, and slightly more heft. Having said that, it's still a really well-designed mouse for those who want a wireless DeathAdder but don't want to break the bank.

Write a Review
Compare This | Specifications
Flawless wireless functionality at an affordable price
Excellent battery life
Supports both AA and AAA batteries
A little on the heavy side
Comes with a heavier alkaline battery instead of a lithium one
Repositioned DPI buttons are hard to reach
Our articles may contain affiliate links. If you buy through these links, we may earn a small commission.
Sponsored Links