Mountain Everest 60 keyboard review: You never have to give up the numpad 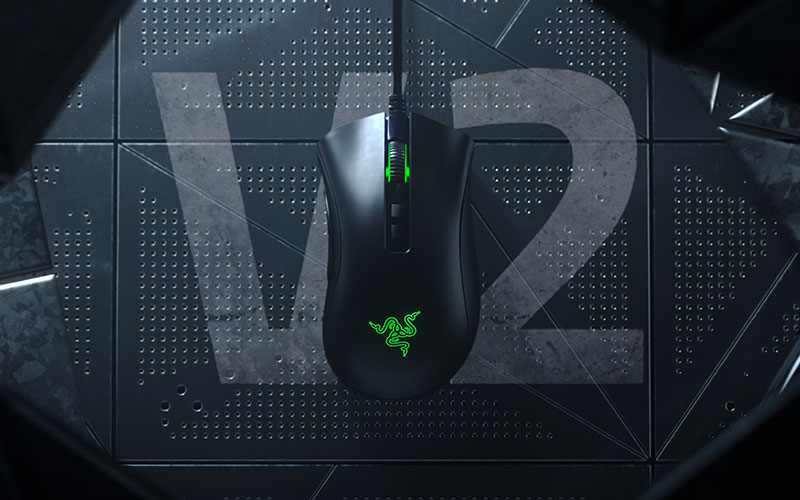 Razer has made over 30 versions of the DeathAdder

The Razer DeathAdder is something of an icon. First released in 2006, Razer has blazed through over 30 different variations of the mouse over the past decade, if you count the game- and team-branded editions as well. This is one of the most popular mice ever made – last June, Razer announced that it had sold 10 million copies of the DeathAdder to date. The new DeathAdder V2 the company announced yesterday joins a sprawling list that includes the Essential, Chroma, and Elite versions of the mouse, but it's probably the best one Razer has made so far.

But do we really need a new DeathAdder in 2020? The DeathAdder Elite came out back in 2016, but mice today are quite different beasts altogether. The latest models tend to feature ambidextrous shapes that are also super lightweight and agile. Razer itself has already hopped on board this train, releasing the Viper and wireless Viper Ultimate, both of which are truly excellent mice. I'd have completely understood if Razer decided to let the DeathAdder rest in the annals of history, a legendary mouse that's already served its tour of duty. 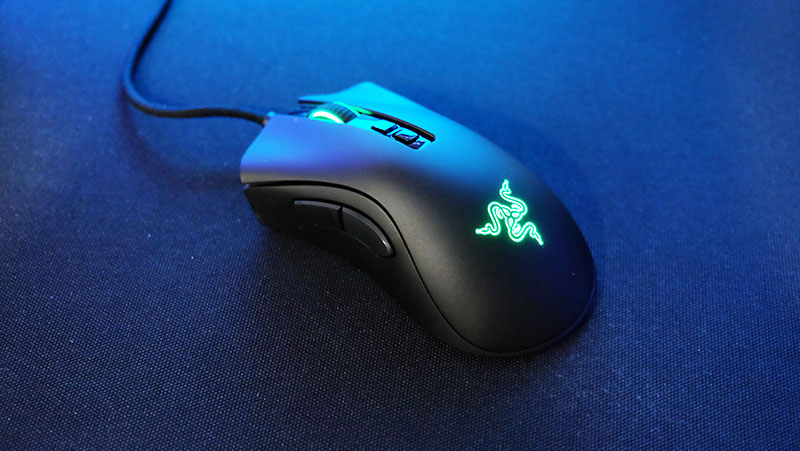 However, the company clearly doesn't want to let this classic die. The DeathAdder isn't what immediately comes to mind when you think of a top gaming mouse today, but the V2 version makes it a lot more competitive with a far lighter body, flexible cable, optical switches, and Razer's new 20,000DPI Focus+ optical sensor. If you've remained a fan of the DeathAdder after all these years, the V2 model is looking like a pretty significant upgrade.

The biggest improvement that the DeathAdder V2 makes over the Elite is probably the weight reduction. At 82g, it's far lighter than the 105g Elite, and that difference is immediately obvious when you pick it up. I've always found the DeathAdder to be a really heavy and ponderous mouse, and the V2 version feels sprightly in comparison. And considering how large a mouse the DeathAdder really is, any reduction in weight goes a long way toward helping it feel more agile and nimble in hand. 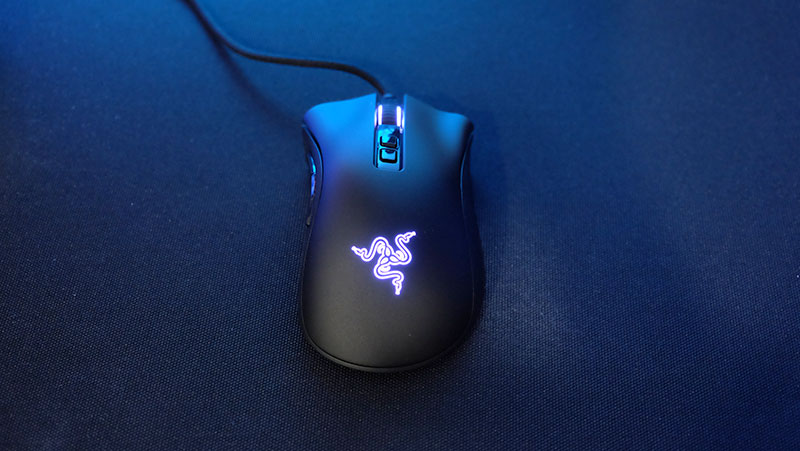 The DeathAdder is also an ergonomic, right-handed mouse, and the V2 largely sticks to that, making only small adjustments to eliminate "unnecessary finger drag points" and reduce stress on your hands, according to Razer. This mostly means a less dramatic flaring out at the sides, which is better, but I don't think the changes alter how the mouse feels in hand in too big a way. If you've used a DeathAdder all this while and are thinking about picking up the V2, you should feel right at home with it.

That said, this is a mouse designed for palm and claw grippers with medium to large hands. It has a very large and prominent hump situated at the center, and it's basically the polar opposite of a low-profile mouse like the Glorious Model O. The left side is curved inward to accommodate your thumb, while the right edge bulges outward to hold your ring finger and pinky. Finally, comfort grooves guide your fingers into place on the mouse 1 and 2 buttons. I found myself going for the palm grip when using the mouse, even though it's not my preferred grip. 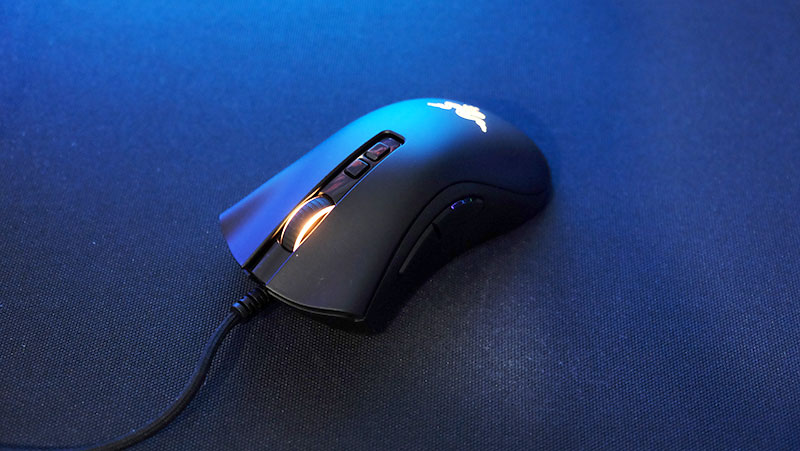 However, I'm personally not a fan of the ergonomic shape and the grooves. I have no doubt that they're very comfortable if they happen to suit your particular grip style, but you're out of luck if they don't. I find that they tend to force your fingers into a certain position, which may not necessarily be how you want to hold the mouse. As a result, I still prefer more neutral, ambidextrous shapes, since they offer more flexibility in this area.

Like previous DeathAdders, the V2 also uses the same single top shell design, where the mouse buttons aren't separate from the rest of the body. This approach means that the body flexes whenever you click, which is technically less durable. Nevertheless, build quality on the V2 feels really good, with no flexing or rattling whatsoever. I wouldn't worry too much about this, but I do find that the mouse clicks are slightly less crisp than on mice that have separate left- and right-click buttons, such as the Viper.

The switches are the same optical switches used on the Viper mice, so they're supposed to enable faster actuations. That's because the switch doesn't rely on metal contacts touching to register a press, so there's no need for any debounce delay. But as I've said countless times, optical switches don't feel tangibly faster, so their biggest benefit is probably what they do to improve reliability, since fewer parts coming into contact should help minimise wear and tear.

That aside, the side buttons feel much better, and they're large and easy to access. 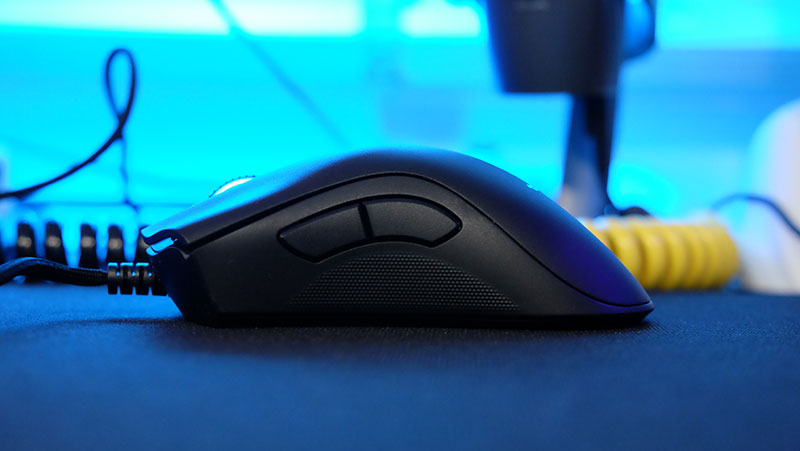 The DPI buttons sit below the scroll wheel, and they're now more square-ish compared to the elongated ones on the Elite. They also have their own slightly recessed niche and are mounted on a strip of glossy black plastic. They give off a distinct hollow sound and feel when pressed, which isn't great. Fortunately, I usually just set every single mouse I get to 800DPI and forget about it, so it didn't bother me too much.

The scroll wheel turns smoothly and has clearly defined notches. More importantly, it's quiet, and I don't really see anyone having complaints about it. 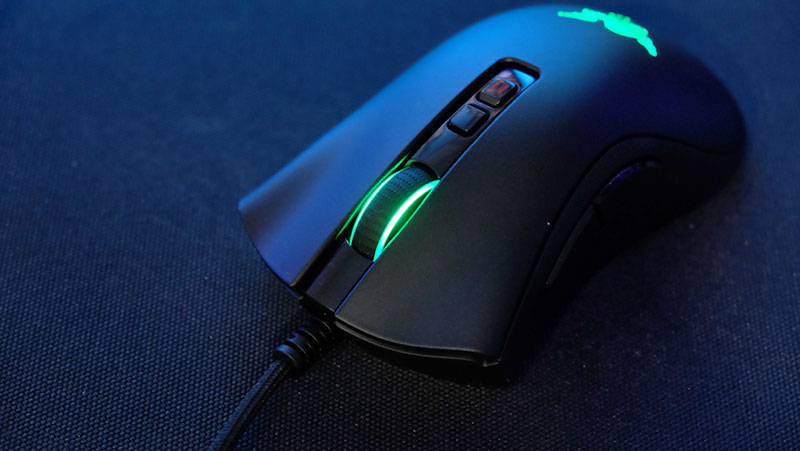 Elsewhere, the mouse feet have been upgraded too. They're now pure PTFE and measure 0.8mm thick, the same as on the Viper Ultimate. Razer's new mouse feet are really pretty good. On my Cooler Master MP510 mouse pad, the mouse glides about smoothly right out of the box, and there's no hint of scratchiness whatsoever.

When it comes to the cable, the Speedflex cord is soft and supple, as on many other top mice today. It's not the most flexible cable I've encountered, but it still does a good job of minimising drag. I was able to use the mouse without a bungee with no issues, so that's mostly good enough for me. 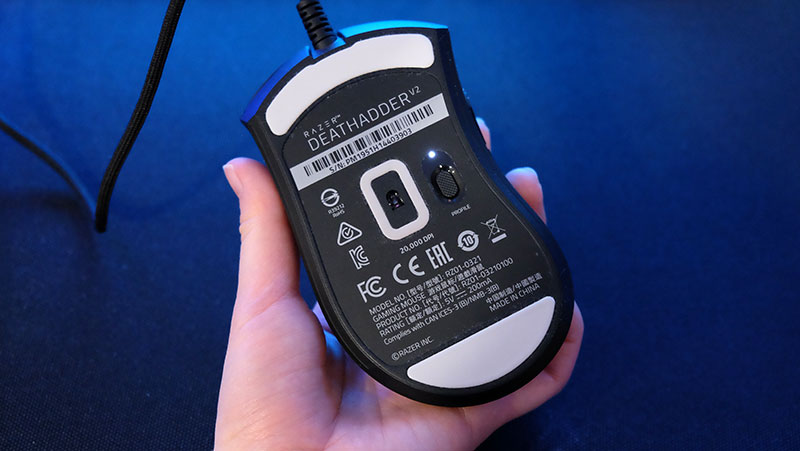 You'll find another button at the bottom of the mouse, which can be used for toggling between different profiles. The onboard memory can store up to five profiles, and each profile holds things like sensitivity and lighting settings. However, it seems like you can only access the different profiles after launching Synapse 3. Similarly, you'll need Synapse to be running to activate your lighting presets, which really seems to defeat the purpose of having onboard memory. What's the point of having onboard storage if you can't just bring the mouse to a new PC and have it load up all your settings without installing any software?

Fortunately, the sensitivity settings and macros do seem to stay even without Synapse, so at least Razer is preserving the most important things. 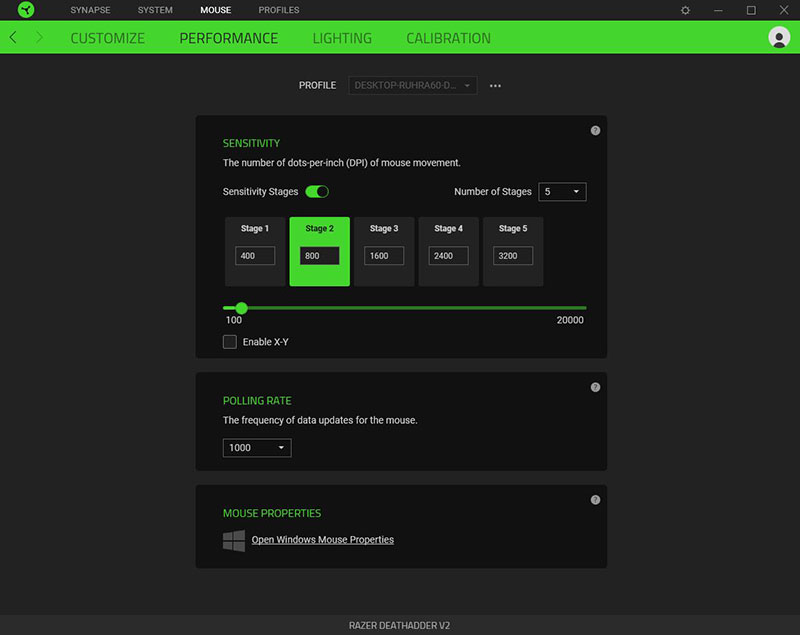 Then there's the 20,000DPI Focus+ optical sensor, which comes with a bunch of new features like Smart Tracking, asymmetric cut-off, and Motion Sync. Smart Tracking automatically calibrates the sensor for the particular surface you're using it on, whereas previously you'd need to install Synapse 3 and manually do this. Asymmetric cut-off focuses on low-sensitivity players who often have to lift up and reposition their mouse, allowing you to set the distance at which the sensor resumes tracking when you set it back down. Finally, Motion Sync syncs the sensor's signals at the same intervals that your PC extracts information, which supposedly gives your PC the most updated position of the mouse.

These features sound pretty neat, but I can't say they translate into any noticeable difference in practice. All you need to know is that the sensor on the DeathAdder V2 is flawless, with no jitter or spinning out in my time with it.

At S$109.90, the DeathAdder V2 is priced the same as the Elite, and I'm glad all the advanced technological bits and bobs haven't driven up the price.

However, I do wish Razer had done a bit more with the mouse's shape. I get that the mouse is a classic, but the V2 moniker seems like a missed opportunity to take the DeathAdder series forward with new options, such as perhaps a smaller version of the mouse or maybe even less aggressive ergonomic curves. 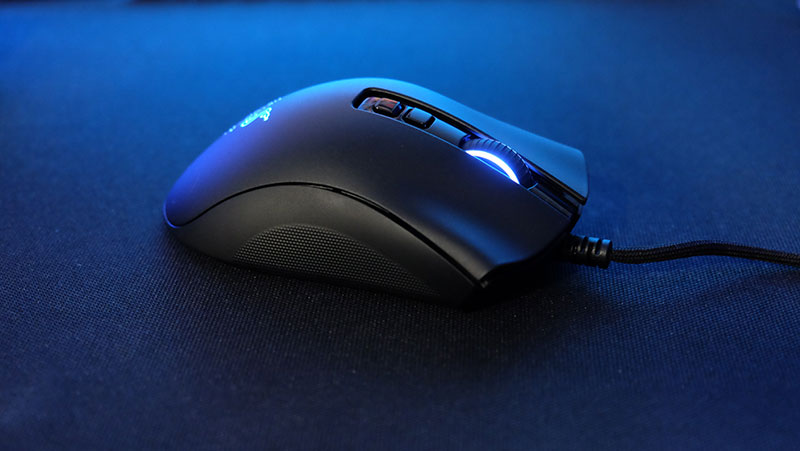 The DeathAdder is a great mouse for palm grippers, but it's also a very big one that nearly excludes folks like me who have smaller hands. Furthermore, its ergonomic shape forces you to hold it in a certain way, which is good for some people but less ideal for others. I'd have liked to see Razer come up with a DeathAdder that is more accommodating in these respects, but who am I to talk? After all, they've sold over 10 million copies of it, so clearly a lot of people love it.

That said, it's definitely a worthwhile upgrade if you're an existing DeathAdder fan, and the huge drop in weight and new features should make you quite happy. But if you've yet to figure out the kind of mice that suits you best or your grip style, I'd still recommend going for something with a "safer", ambidextrous shape to start out.

Write a Review
Compare This | Specifications
Great build quality
Almost perfectly designed for the palm grip
Stock mouse feet are slick and smooth
Soft and supple cable
Significantly lighter than the DeathAdder Elite
Synapse 3 still needs to be running to access custom profiles and lighting effects
Not suitable for people with smaller hands
Shape is not for everyone
Our articles may contain affiliate links. If you buy through these links, we may earn a small commission.
Sponsored Links