Razer Cynosa Chroma review: A keyboard for those who love their LEDs

Razer Cynosa Chroma review: A keyboard for those who love their LEDs 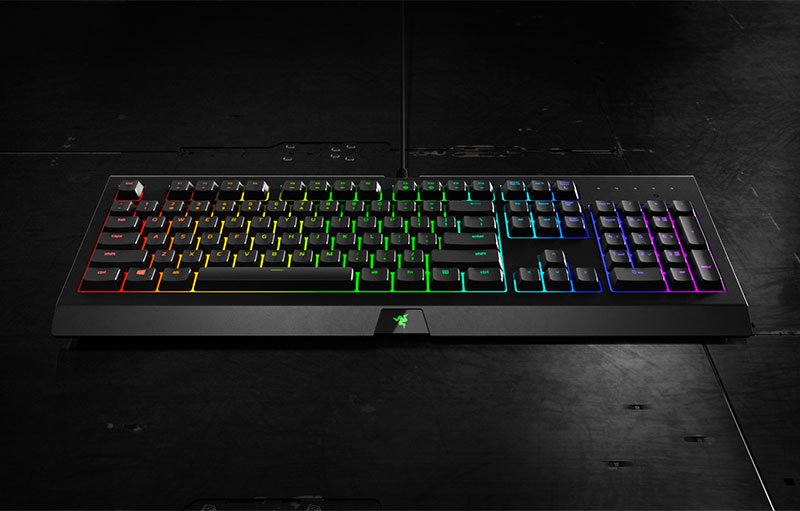 When it comes to keyboards, Razer’s probably better known for its Blackwidow line of products, which span the range from the more affordable Blackwidow X models to the super pricey Blackwidow Chroma V2.

The company introduced something new with the Ornata and its mecha-membrane keys, but it hasn’t had something to fill the gap where the Lycosa once stood.

That changes today with the release of the Cynosa Chroma and Cynosa Chroma Pro keyboards, a pair of relatively affordable keyboards that feature Razer’s signature Chroma lighting.

At S$99 and and S$129 respectively, one of their strongest selling points is their price. Unfortunately, those of you hoping for an affordable mechanical keyboard will be disappointed, as both of them feature decidedly ordinary membrane keys. 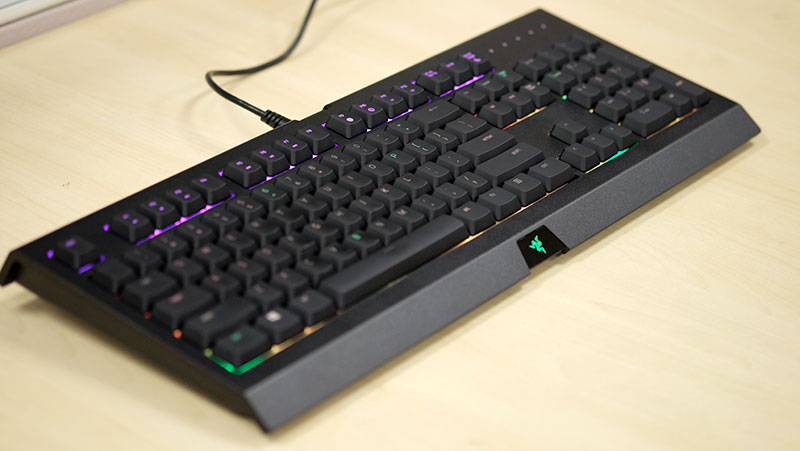 Razer describes these as “soft-cushioned gaming-grade” keys, which may or may not be a way of excusing their mushy feel. But for what it’s worth, the membrane keys on the Cynosa feel way better than those on the Lycosa, and while they can’t compare to actual mechanical keys, I can see less picky users being okay with them.

Razer also says the keyboard is spill-resistant, and while I didn’t get to test this out, at least there’s the assurance that the Cynosa will live through small accidents.

Still, Razer’s making up for the lack of mechanical keys by including per-key RGB lighting that can be customized using its Synapse 3 software. Per-key customizations are a rarity at this price point, so it’s nice to see Razer making the feature more accessible to the masses.

Each key has its own individual LED, so the lighting is bright and quite even. The inside of the base plate has also been colored white, which helps accentuate the lighting even further. 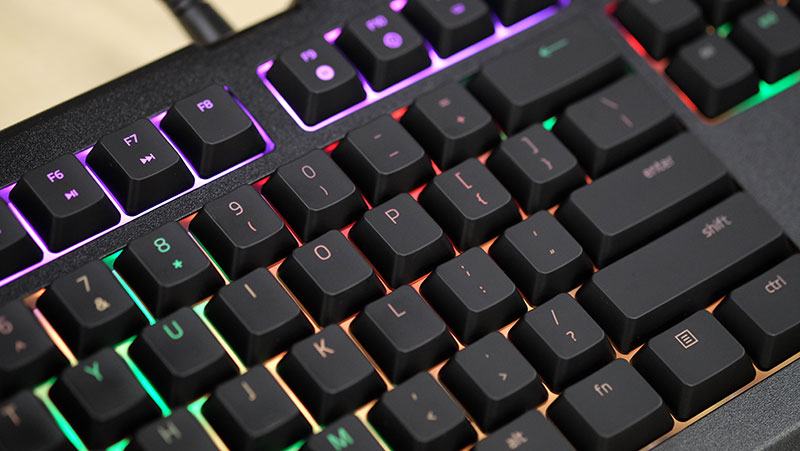 You’ll find a mind-boggling range of options inside the Synapse 3 utility, including options to adjust the peaks of your roiling wave of color, tweak the speed and angle of the wave, or even stack effects on top of one another to combine them.

Other features offered in Synapse 3 include a dedicated Game Mode, which lets you disable pesky keys such as the Windows button or the Alt+Tab combination. This can be a lifesaver when you’re frantically button-mashing in game, so the Cynosa has most of the basics covered.

Some of the function keys also double as media, volume and backlight controls. When you hold down the Fn key, the entire function row lights up in white, so you immediately know what keys have additional functions available to you. The brightness adjustment keys offer very minute adjustments, and because the non-function keys have their backlight deactivated when you hold down the Fn key, it's a little hard to tell what extent of adjustments you've made. 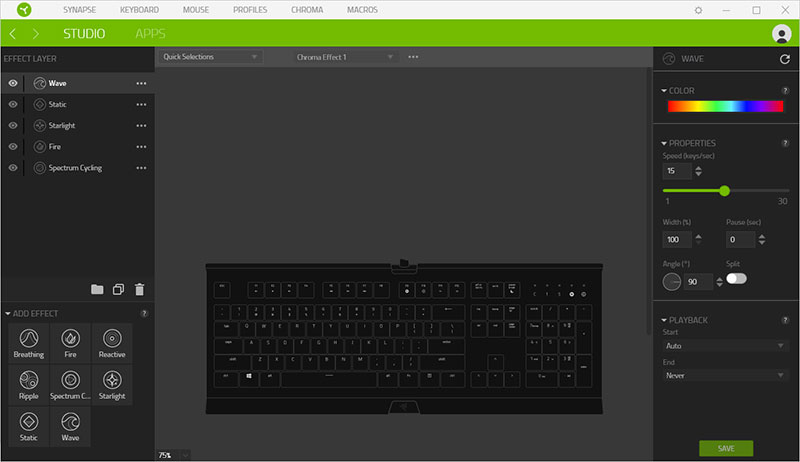 Nevertheless, the sheer degree of customization available has always been Chroma’s strongest suit, and the Cynosa doesn’t disappoint. I definitely appreciate Razer making this feature available in the sub-S$100 bracket, where the keyboard leaves most of its peers in the dust when it comes to lighting options.

However, it’s still S$40 more expensive, and if you have no use for the mouse, Razer’s Cynosa may appear all the more attractive given its S$99 price tag.

The S$129 Cynosa Chroma Pro is more or less the same keyboard, and the only difference is the addition of 24 discrete lighting zones on the left, right, and front of the keyboard.

If you want still more LEDs than you’re getting on the Cynosa, the Pro hopes it’ll make you happy. However, the higher price tag makes the keyboard’s other shortcomings harder to justify. For instance, Razer’s own Blackwidow X Tournament Edition is cheaper at S$119, but it makes you give up the Chroma lighting in favor of honest to goodness Cherry MX Blue switches.

That’s a pretty good trade-off to me, but then again I’m not an RGB LED fanatic. 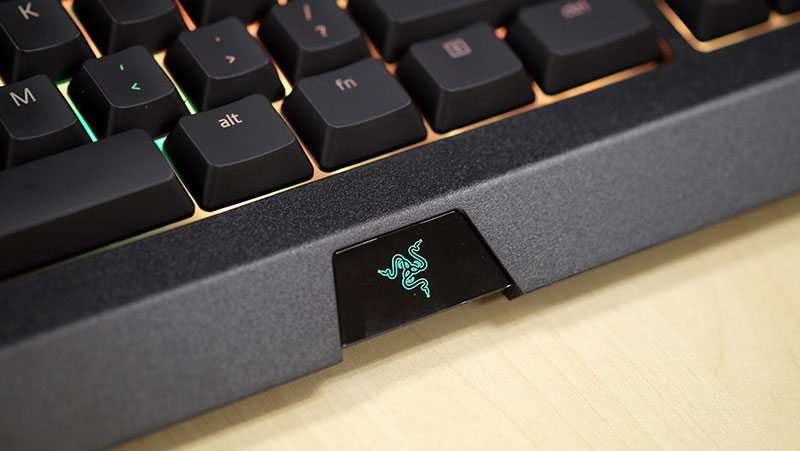 Alternatively, there’s Logitech’s G413 keyboard, which costs S$129 as well and comes with the company’s Romer-G mechanical switches, but once again falls short on the LED front with just a single-color backlight.

However, what you get on the G413 is pretty good build quality, the same of which cannot be said of Razer’s new keyboards.

To be clear, the build quality isn’t terrible. It’s alright, but that’s exactly the problem. The all-plastic (at least there’s no glossy finish anywhere) body feels mediocre and unimpressive. It’s also super light and has some flex to it, so this isn’t one of those keyboards that feel like you could knock someone out with them.

The keyboard is also missing more premium features like a detachable, braided cable, but that’s to be expected at this price.

Fortunately, the rubber feet at the bottom of the keyboard do their job of holding the keyboard in place, so you won’t find it sliding around despite its light weight. I also like the inclusion of two different sets of feet for different angles of elevation, which is similar to what the Logitech G Pro gaming keyboard had. 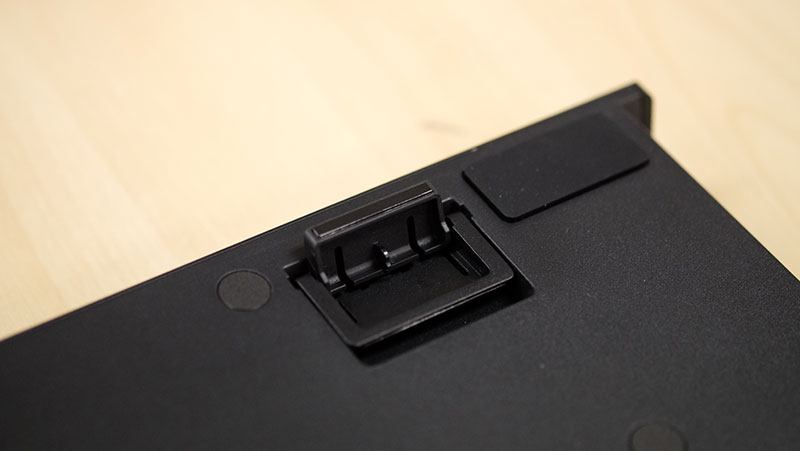 All things considered, I probably can’t complain too much, given how affordable the Cynosa is. Things like a metal chassis and mechanical keys cost more, and Razer is going after the mainstream crowd here.

Previously, it used to be that per-key lighting was a feature reserved for expensive mechanical keyboards. The Cynosa isn’t the first to break the mold and make the feature available at a much lower price point, but it just might have one of the best implementations.

If mechanical keys aren’t your top priority, and you absolutely love being able to play with different lighting effects, you’ll probably want to give the Cynosa a look. It stands, or falls, on the RGB Chroma features, and how much you like it will depend on what you think a keyboard should be.

Write a Review
Compare This | Specifications
Per-key RGB lighting
Very affordable for such features
Synapse 3 software is highly customizable and intuitive to use
Mediocre build quality
No mechanical keys
Keycaps prone to shine
Our articles may contain affiliate links. If you buy through these links, we may earn a small commission.
Sponsored Links